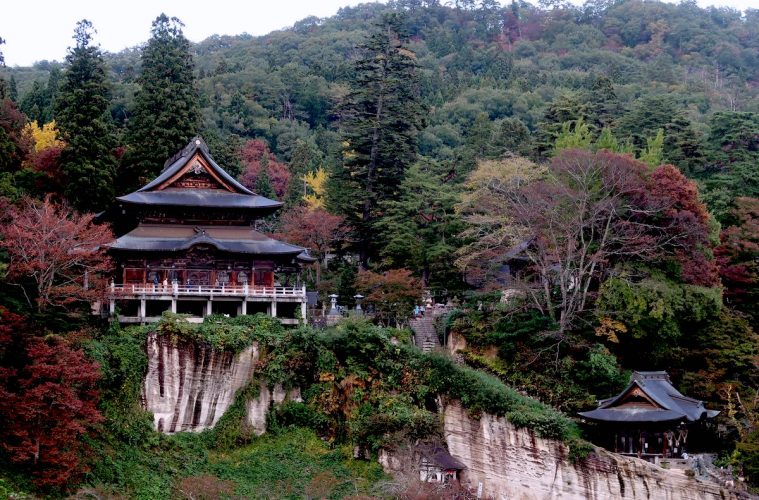 Fukushima Prefecture: Go for the Sake, Stay for the Hot Springs and Samurai History

I never knew I liked sake until I went to Fukushima Prefecture, located in the northeastern end of Japan in the Tohoku region. After all, my first run-in with Japan’s national drink came in my late twenties, when I drank too much of the warm liquid in a Tokyo bar on a cold snowy night, followed by slip-sliding my way back home.

I pretty much steered clear after that, but in Fukushima I learned that good sake is often best consumed chilled or at room temperature and paired with foods, much like a fine wine. In fact, bars that serve only hot sake often do so to mask inferior quality. Picture me, if you will, thumping my forehead with the heel of my hand.

For the sake of sake 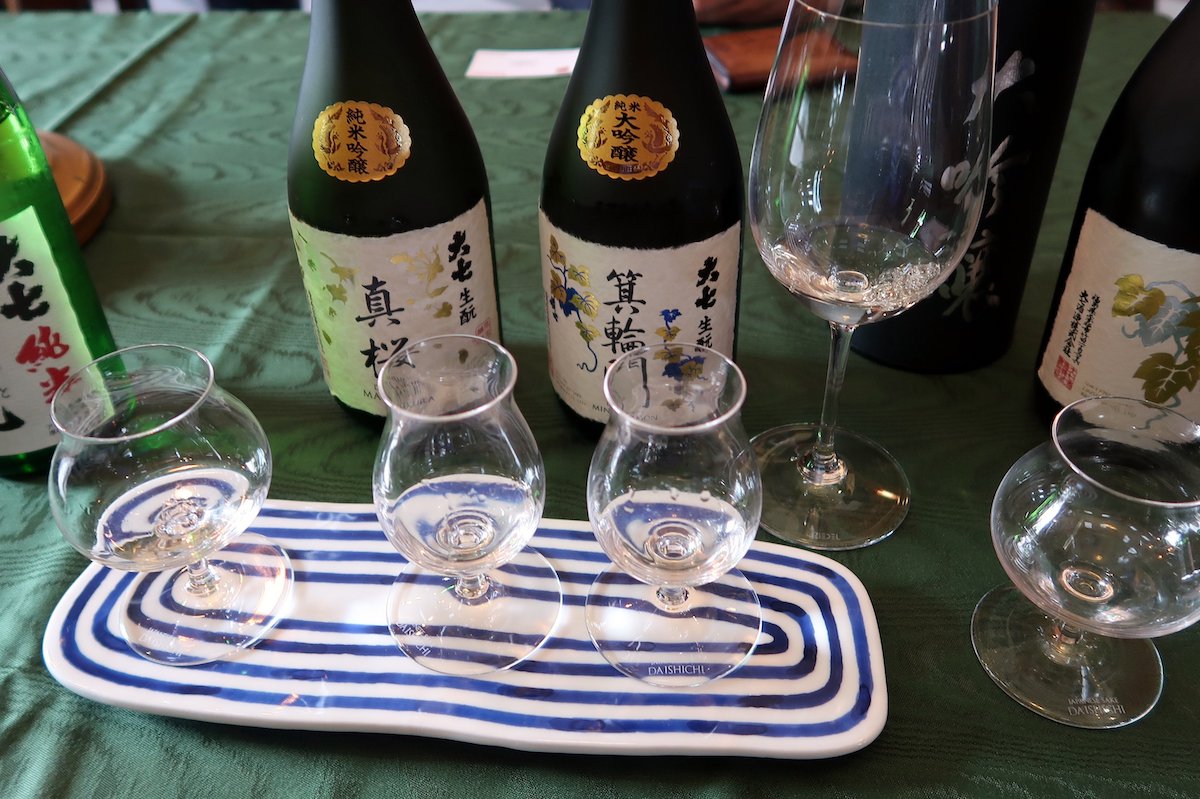 Daishichi Sake Brewery has been in business since 1752

Tohoku is famous for sake, where cold winters allow brewers to ferment and store their products at lower temperatures that result in lighter and more delicate profiles. But, Fukushima Prefecture is especially renowned and has more than 60 breweries. I received my education in the old castle town of Nihonmatsu, at the Daishichi Sake Brewery. It was founded in 1752, by Ohta Saburoemon. Since then, an astounding ten generations of the Ohta family have dedicated themselves to the family tradition.

What sets Daishichi apart is that it has always brewed sake using the ancient kimoto method, developed around 1700, and for centuries the sole method. In the aftermath of Japan’s rapid industrialization in the early 1900s, however, followed by economic hardship after World War II, most brewers switched to a method that is less labor intensive and twice as fast. That makes Daishichi rare in the world of sake now, all of which I learned during a tour of its modern facilities, followed by sake tastings.

Probably the most vital ingredient of excellent sake is pure, high-quality water, which in the case of Nihonmatsu is supplied by nearby Mt. Adatara. The other important ingredient is sake rice, which is different from the rice we eat. Here again, Daishichi diverges from its competitors by pioneering a milling technique to remove surface proteins and crude fats, which can lead to off-flavors. Instead of conventional rice polishing, which mills rice into small, round balls that leave too much of the protein and crude fats at their thick middle center, Daishichi developed an innovative super-flat technique that mills grains with an equal thickness, thereby removing all proteins and fats. 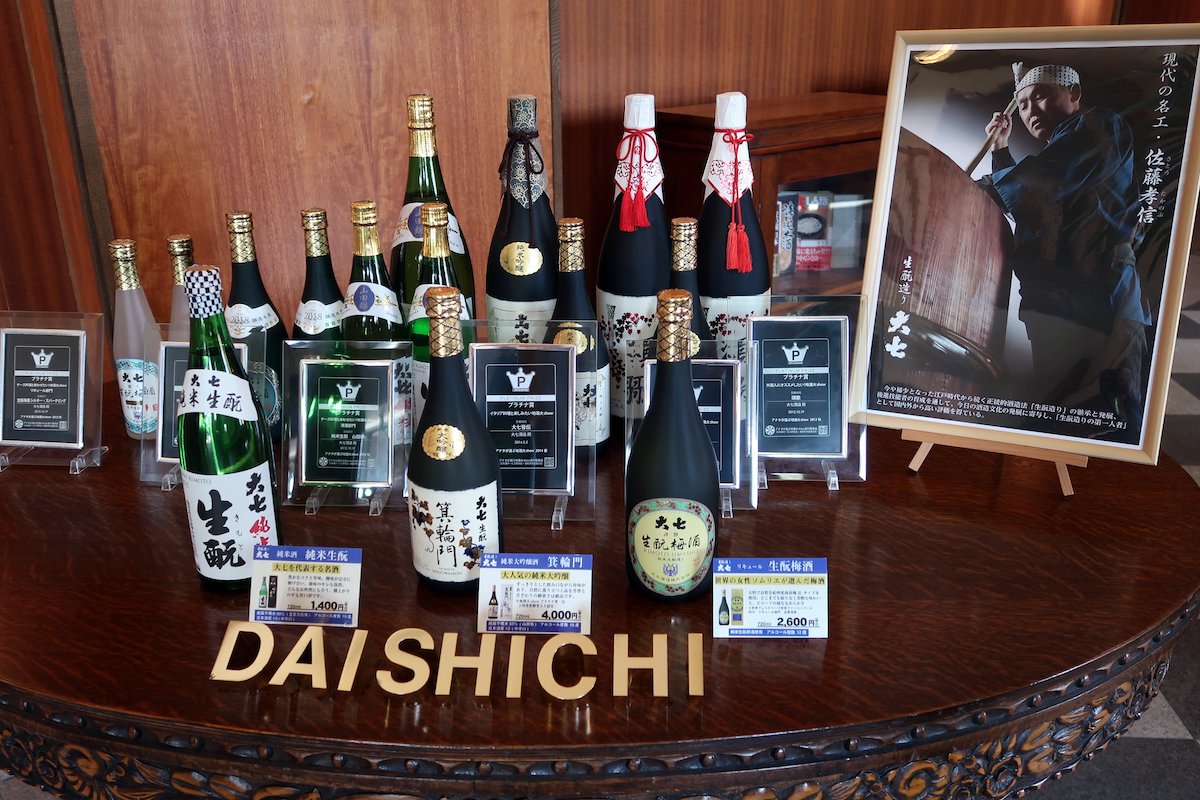 Some of Daishichi Sake Brewery’s many awards

After that, it’s up to the starter yeast, which is where the kimoto method comes in. Whereas most breweries today speed up yeast reproduction by introducing commercial lactic acid, the kimoto method allows lactic acid to produce naturally by combining water, steamed rice and koji (mold) in separate vats and mashing the ingredients into a paste.

That paste is then added to the yeast, which is given another two weeks to reproduce before more rice, water and koji are added so that fermentation can begin in earnest. Koji is considered the essence of sake production and used four times during the brewing process. While many breweries have one koji room, Daishichi has four. Daishichi also differs from conventional methods in its bottling process, using the anoxia bottling system in which oxygen is entirely eliminated, thus preventing oxidation and allowing for longer preservation of quality.

That’s why Hidehara Ohta, 10th-generation owner of Daishichi, is keen to point out that while his company is dedicated to the old kimoto method, it also embraces modern innovation. 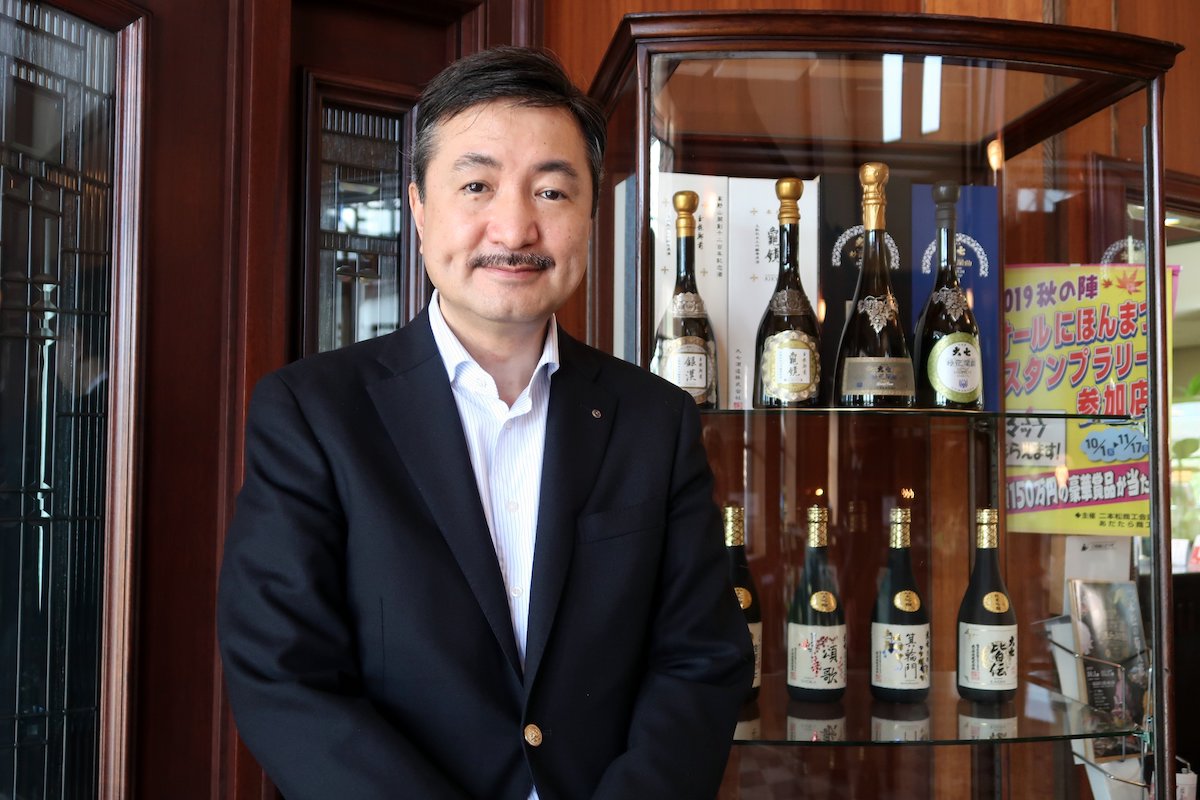 The result is complex sake that grows and ripens over time, making it comparable to fine wine. It’s even served in wine glasses, chosen specifically to enhance the type of sake being served. And just as wine complements certain foods, sake, too, can be selected based on the dish. Daishichi’s junmai sake goes well with fried chicken or scallop terrine and junmai ginjo sake pairs well with charcoal-grilled red sea bream in butter sauce or Peking duck.

“Of all the sake that we sell in the United States, Daishichi Minowamon, named after a gate at Nihonmatsu Castle, is our biggest seller because of its excellent flavor and rich, umami taste,” said Ohta, adding that it pairs well with buttery, creamy dishes.

Other sake breweries with tours include Himonoya, also in Nihonmatsu, and Suehiro Sake Brewery Kaeigura in Aizuwakamatsu.

Of course, if you travel to Fukushima Prefecture, you’re going to need a place to stay. What better place to rejuvenate than at one of Fukushimas’s 130-some hot-spring resorts?

Near Nihonmatsu is Dake Onsen, with a history stretching back 1,200 years and one of Japan’s few acidic thermal springs, said to benefit skin and aid against rheumatism. There are 11 Japanese inns (ryokan) in the small resort, including Hanakanzashi, established 130 years ago. It offers eight rooms, beautifully prepared cuisine served in your own private dining room, free shuttle service from Nihonmatsu Station, and even free sake to enjoy in its hot-spring bath.

Incidentally, Nihonmatsu is a popular destination for skiing in winter and hiking in summer, but strangely enough it’s also famous for the Ebisu Circuit, with race tracks offering drifting and lessons to the public. I have to admit I didn’t know what drifting was–something to do with over-steering around curves so that the car goes through them sideways–but you won’t see me doing it anytime soon.

Fukushima City, capital of Fukushima Prefecture and fewer than two hours from Tokyo by Shinkansen bullet train, has several hot-spring resorts, making it a convenient choice even for a weekend getaway. Iizaka Onsen has nine public baths and about 40 ryokan, including Nakamuraya. 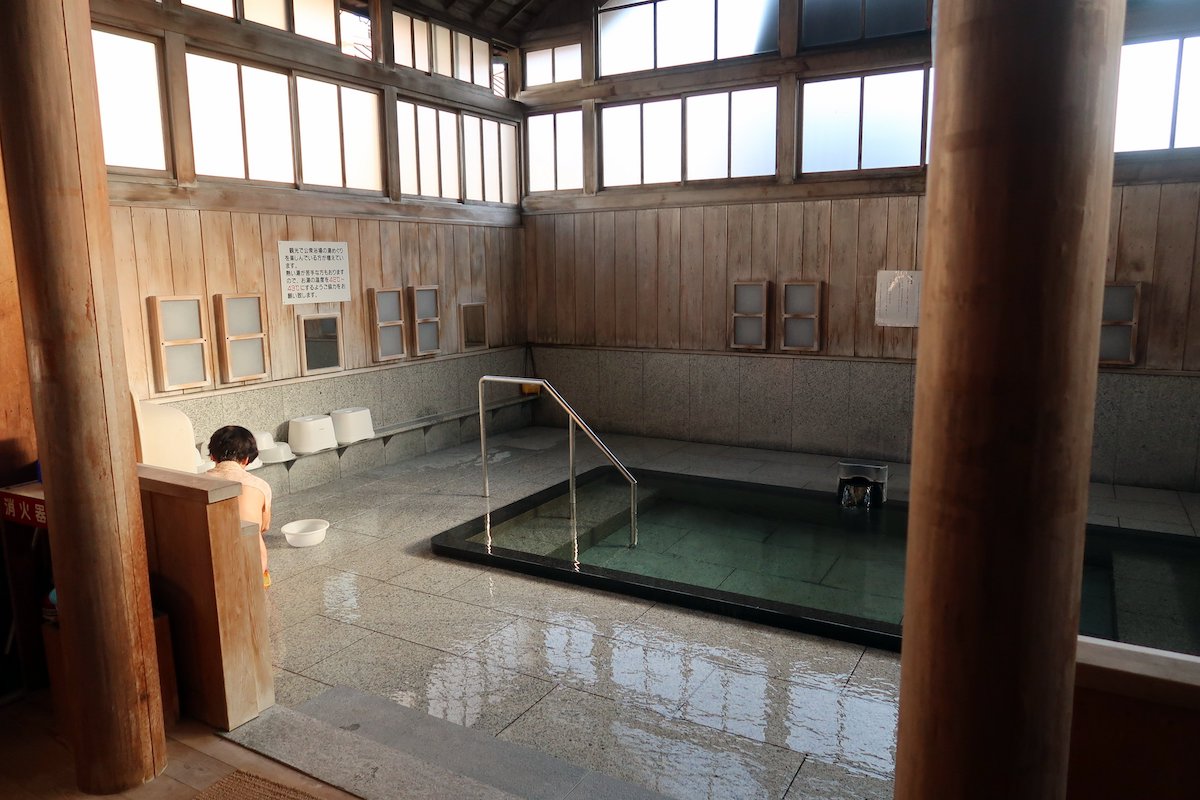 Sabakoyu, where beloved haiku poet Basho is said to have bathed

Occupying a splendid 200-year-old building with beautiful woodwork and filled with antiques, it’s under the helm of seventh-generation innkeeper, Hiroshi Abe. Interestingly, back in the Edo Period (1603–1867) its five tatami rooms had sliding partitions that could divide them into some 15 rooms accommodating up to 100 people. And I thought Tokyo was crowded. 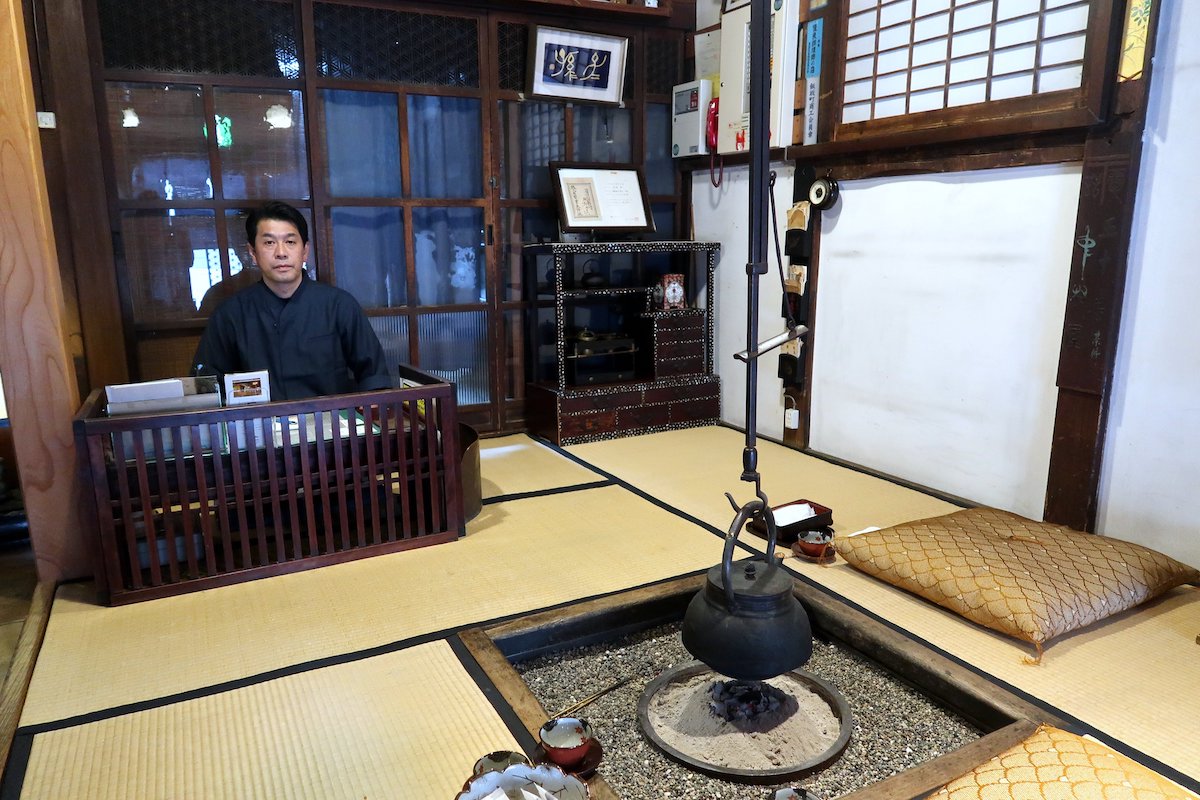 Down the street is Kyu Horikiri-tei, former property of a wealthy Edo-Period farming and merchant family now open free to the public. In addition to the main residence and former storehouses filled with period items, it has a hot-spring “foot bath” where you can soak your feet.

Yanaizu is one of my favorite hot-spring villages in Fukushima. A delightful riverside town, home to just 3,400 people, it’s famous for Enzoji Temple, perched on a cliff above town with a history going back 12 centuries. At the foot of the temple is Uchidaya, one of Yanaizu’s seven ryokan. Established 140 years ago and now under its fourth generation of innkeepers, Uchidaya offers eight simple rooms and home-cooked local cuisine. In its lobby are photos of days gone by, including one showing geisha entertaining customers back in Yanaizu’s heyday.

Many restaurants serve Yanaizu’s most famous dish, Sauce Katsudon, a rice bowl with cabbage, fried egg and deep-fried breaded pork cutlet covered with a secret sauce. Most visitors also buy awamanju, a confectionary made from millet with a sweet red-bean filling that was created in the mid 1800s as a lucky bun to ward off disasters like fires and floods. Get your lucky bun at Koike Kashiho, which has been making awamanju for more than 100 years.

Among Japanese, Fukushima Prefecture is especially known for its samurai history. During the Edo Period, all of Japan was under strict control of the shogun (military dictator), who lived in Edo (present-day Tokyo) in the mightiest castle in the land. The rest of Japan was divided into fiefdoms, ruled over by daimyo (feudal lords) aided by their samurai retainers. To prevent resurrection in the provinces, the shogun required that all daimyo spend every other year in Edo. Footpaths from all corners of the country led to Edo, interspersed with post towns providing accommodations and food for daimyo and their entourage of samurai and servants.

Ouchijuku was one such post town, now the prefecture’s top destination. Located on the former Aizu Nishi Kaido (Aizu West Highway) linking Fukushima’s Aizu region with Nikko, it was used for the transportation of rice and for daimyo making their biennial trek to Edo. Although Japan’s embrace of modernization spelled the demise of most post towns, Ouchijuku slid into obscurity when new transportation routes bypassed it. Today, 48 original thatched buildings from the Edo Period line both sides of the wide, unpaved road, now housing restaurants, souvenir shops, and minshuku (the Japanese equivalent of a bed-and-breakfast). 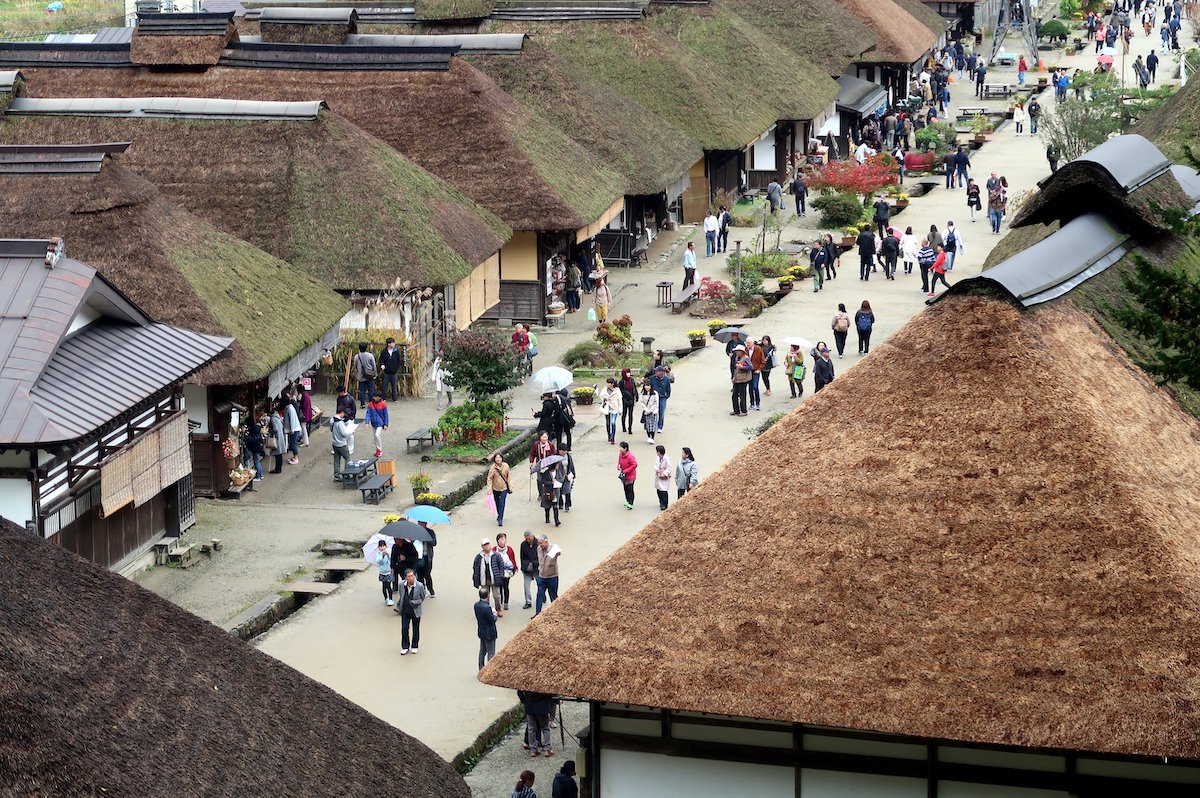 In 1867, after some 220 years of self-imposed isolation ended and Japan was forced to open to international trade, the shogun was overthrown and Emperor Meiji was restored to power. Some disgruntled samurai, however, remained loyal to the shogun. Fighting between samurai and Imperial forces, known as the Boshin Civil War, took place in various locations around Japan, but it was in Fukushima where samurai took their last stand.

Aizuwakamatsu, located in the Aizu region, is nicknamed Samurai City and is Fukushima’s most famous samurai town. It was here, in and around Tsuruga Castle, that the mighty Aizu clan fought the last samurai battle. 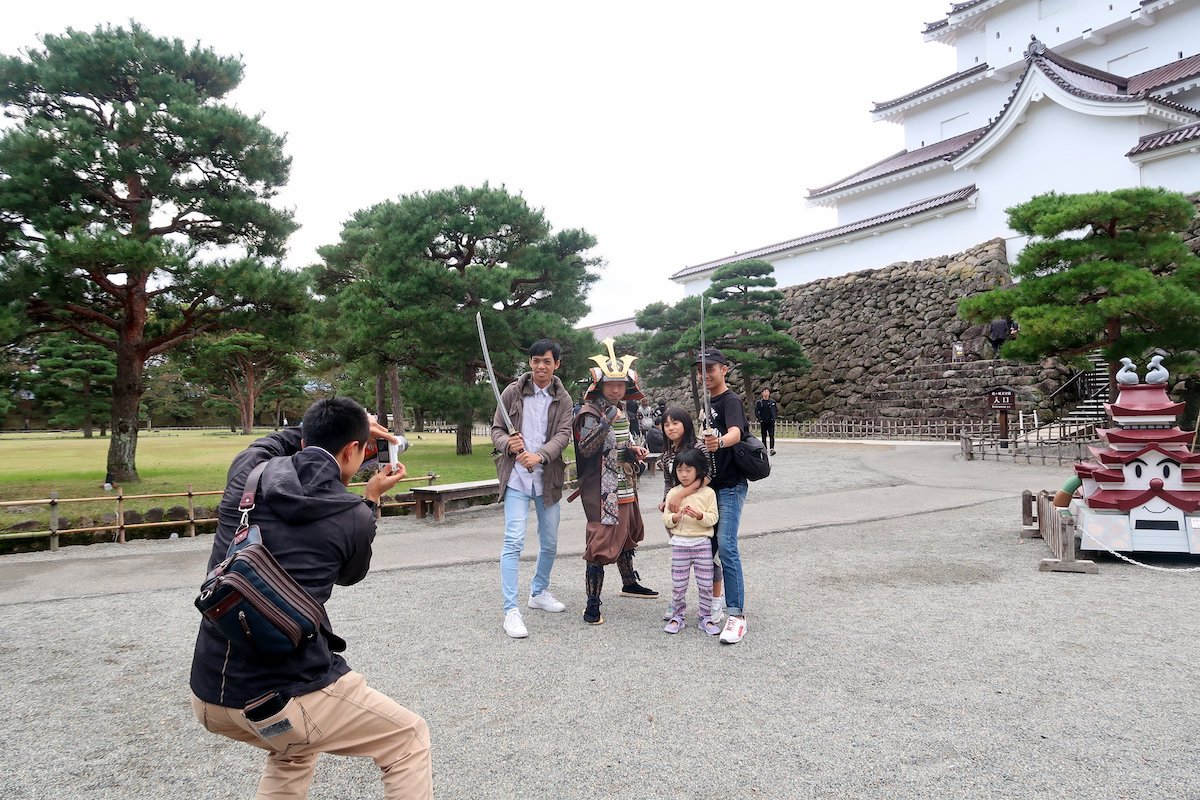 Most of the city ended up in flames and thousands lost their lives, including female samurai and a contingent of samurai teenagers known as the Byakkotai (White Tiger Force). After retreating to a hill and seeing flames engulf what they thought was Tsuruga Castle, the boys decided that rather than face capture, the most noble thing was to commit seppuku, ritual disembowelment. Today, tombs dedicated to the Byakkotai pay tribute to their bravery, while restored Tsuruga Castle contains a garden, teahouse, and 1,000 cherry trees.

Near the castle is another important site related to samurai history, the 38-room Aizu Bukeyashiki. Destroyed during the Boshin War but faithfully resurrected in 1975 (based on original drawings), it’s a great representation of the lifestyle of the rich and famous of the time. Saigo Tanomo, chief retainer of the Aizu clan, lived here with his family, soldiers and servants. 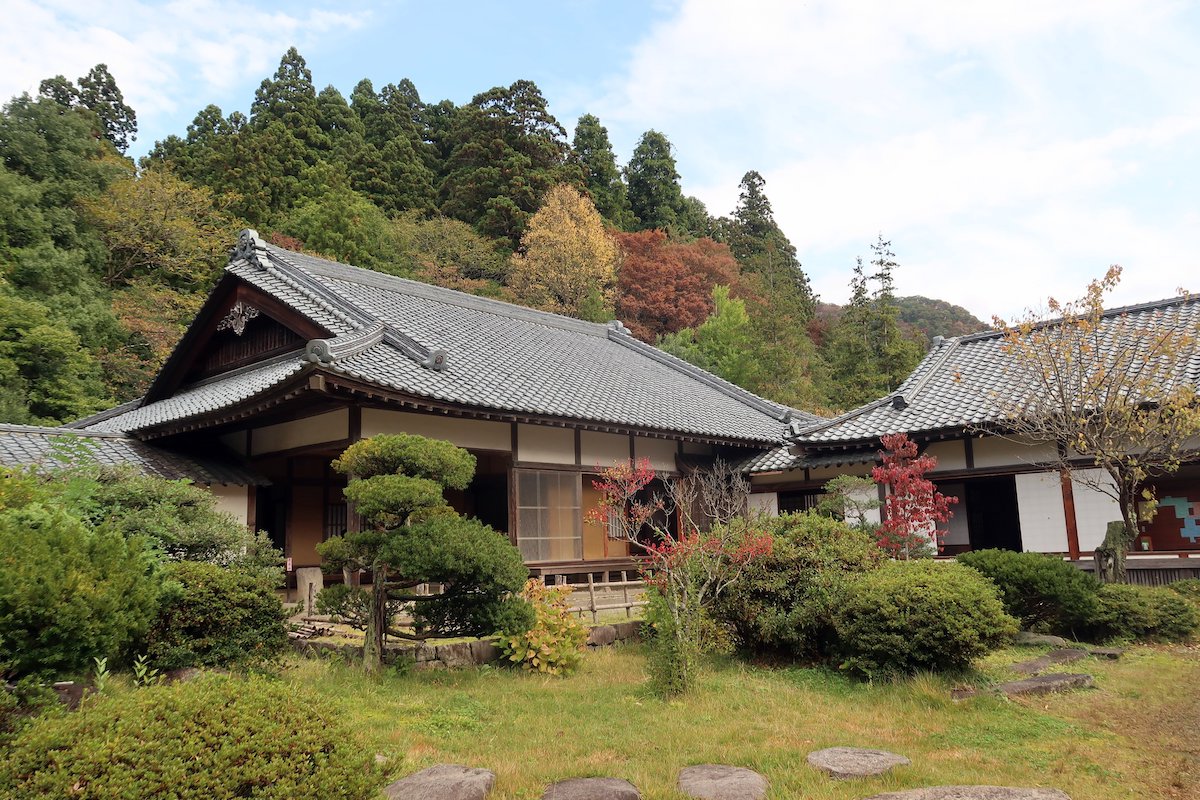 Aizu Bukeyashiki, home of a high-ranking samurai, where 21 family members killed themselves

Befitting a high-ranking samurai, the home had four entrances: a grand entrance only for high-status samurai, another for Saigo’s retainers, a third for his family, and a kitchen entrance for servants. The manor was strictly divided into an administrative area in the front and private family quarters in the back. The eldest son had his own room, while his younger brothers had to share. The head of the household even had his own lavatory, with a sandy receptacle underneath so that servants could easily assess Saigo’s daily health.

Sadly, while Saigo was at battle and defeat by Imperial forces was eminent, his wife killed their three youngest children before committing ritual suicide together with their teenage daughters, her sisters, and other family members. I’ve learned that such tragedies were not uncommon in feudal Japan, but at least Aizuwakamatsu offers curative hot springs and sake breweries, antidotes, perhaps, to life’s transitory nature since ancient times.

Disclosure: The author was an invited guest of a Japanese public relations firm in collaboration with Tohoku Tourism Promotion Organization 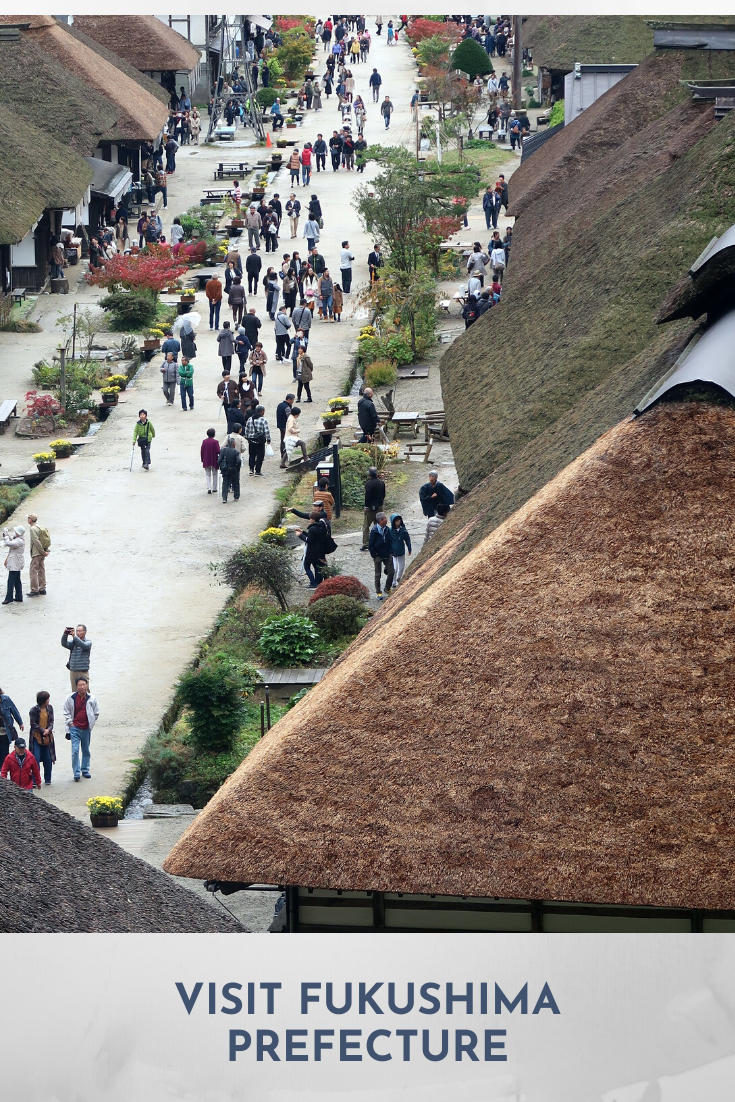