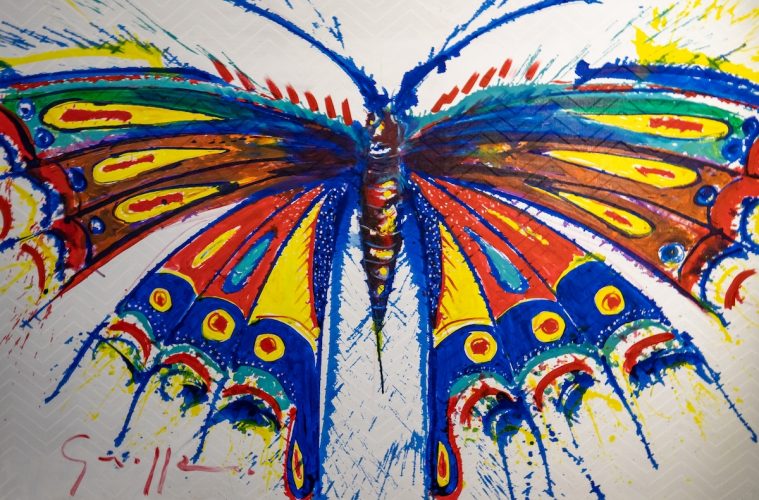 Francisco Grippa, one of Peru’s most renowned contemporary artists, lives deep in the emerald jungle—seeking inspiration from its biodiversity, culture, religion and nature.

Deep in the Peruvian Amazon, about 90 miles downriver from Iquitos, lies the jungle village of Pevas. Close to the Columbian and Brazilian border, this has been the abode of internationally acclaimed Amazonian artist Francisco Grippa for the last 40 years.

Born of Peruvian and Hungarian parents on July 14, 1942, in northern Peru, Grippa marvels how he discovered Pevas as a young man – a time when he was living in the United States. After reading an article in National Geographic about the allure of Pevas, he vividly remembers getting goosebumps all over his body.

“I got goosebumps once again when I went to the jungle and discovered the magic of Pevas,” he adds. When his mother asked, “Why Pevas?” he simply said he had to fulfill himself. “The native Shipibo (indigenous people) inspired me.” His very essence had been stoked. 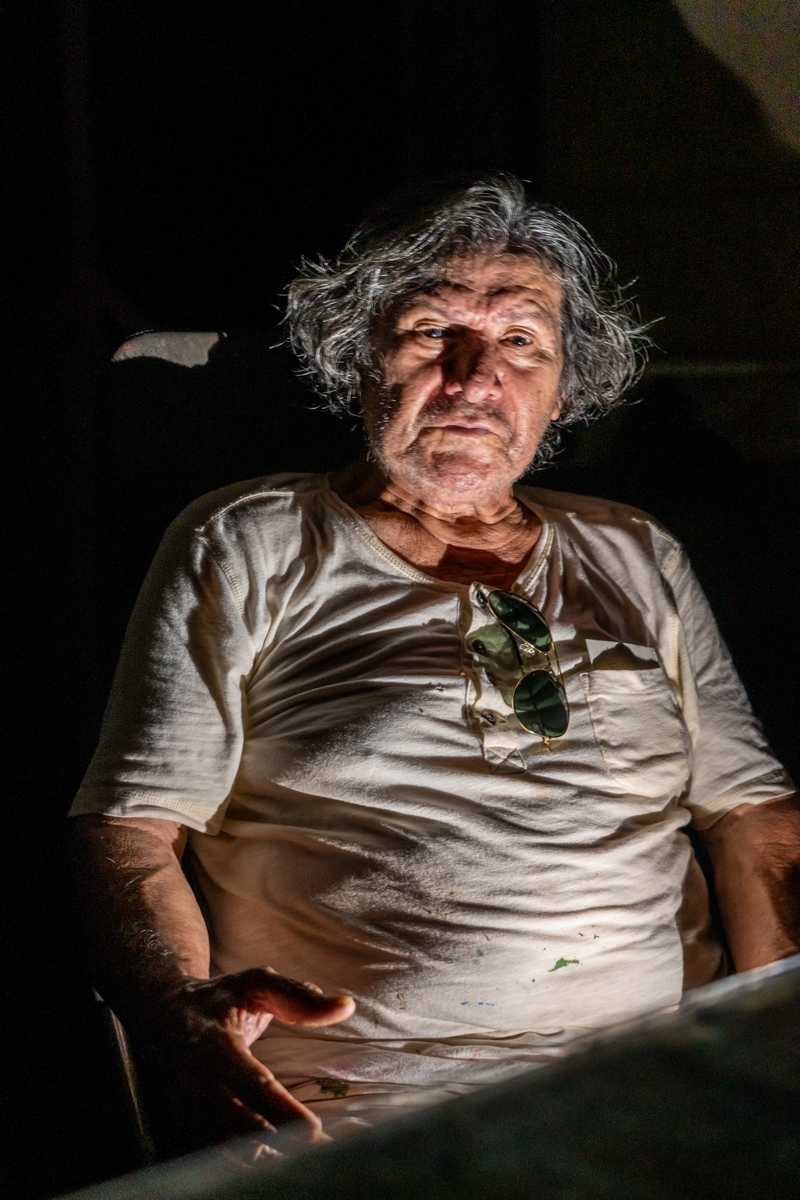 Despite the remoteness of Pevas, people travel from around the world to see him and buy his original art. No two pieces are the same as he takes pride that each work is unique. Before settling in this remote stretch of the Amazonian rainforest, Grippa had an international presence – living and studying in Paris, London, and New York.

He is known as an aggressive painter who melds motion, color, texture and light in natural renderings of the mysteries and spiritual interpretation of the Amazonian jungle. His paintings interpret nature with a free-flowing creativity powered by confident brush strokes, all derived from thousands of hours of masterful training.

As an artist, Grippa knows inspiration must come from within. He paints what moves him, always trying to capture the essence of energetic movement and heartfelt feeling.

“A true artist paints from the gut,” quips Grippa as he pours me a beer in the Pevas late afternoon sun. When I ask him about the legacy he wants to leave, he retorts that he wants to be remembered as Grippa the painter…that he painted what he wanted to paint, he lived life the way he wanted to live, and that he works with what he implicitly feels. He also shared with me that his has been a full life. 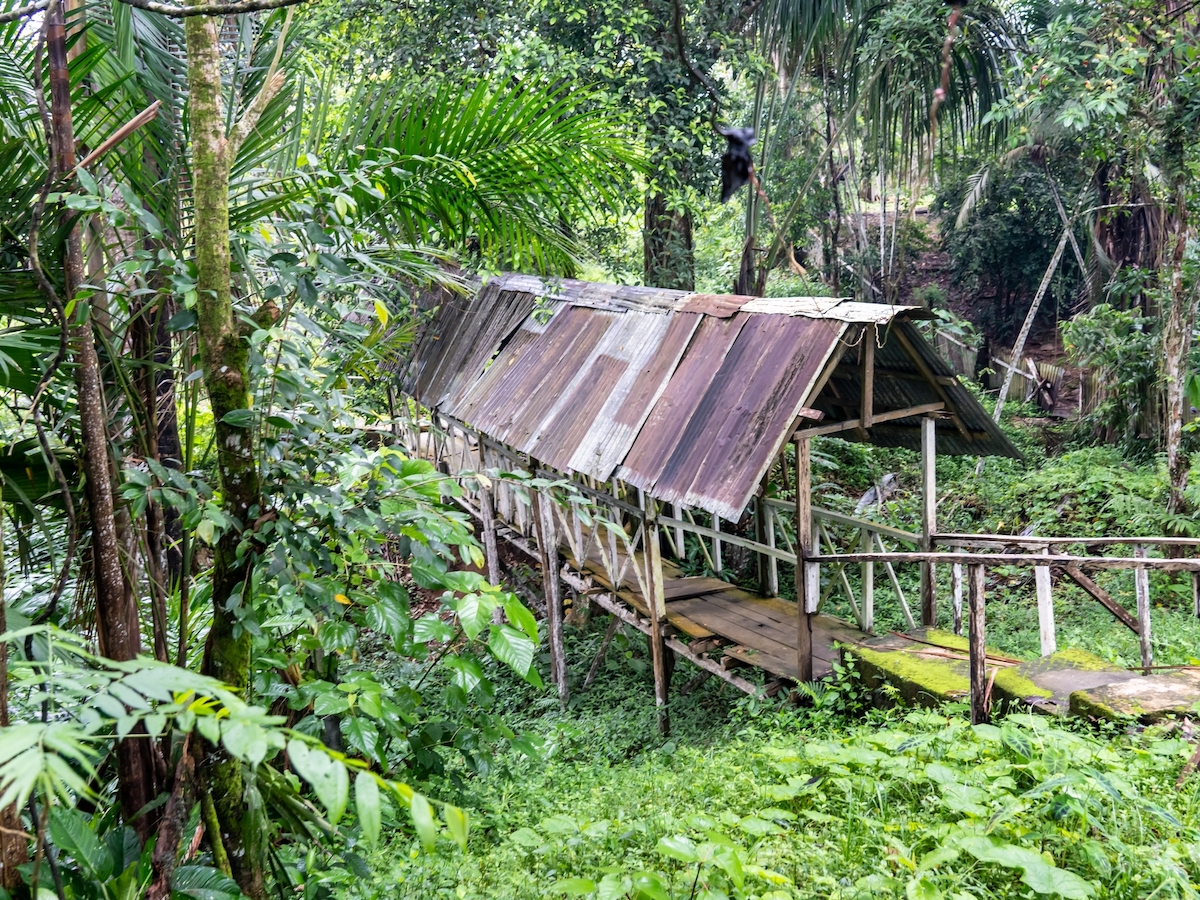 His combination wooden studio/gallery is situated on stilts, on top of a hill. From here he has a birds-eye view overlooking the Rio Ampiyacu and the surrounding rainforest. Interspersed are coconut palms and thatched-roof houses of those who make Pevas their home.

A master of many media, his preferred choices are oils and acrylics. He tells me he likes to paint early in the morning. This is when he sees the world reborn for another day, when the raw soul of the jungle comes alive.

His favorite subject matter is biodiversity in the Amazon. He explains to me that this is where he brings together the beauty of the elements through a shared symbiosis of energy.

“I don’t paint for money,” Grippa adds, “As I respect each image for its uniqueness. I respect the ethics of the painting because it is ethics that gives my canvas a unique honesty.”

That is why he counts many collectors: they are content to know that each of his paintings is unique. Prices typically range from $250 to $20,000. 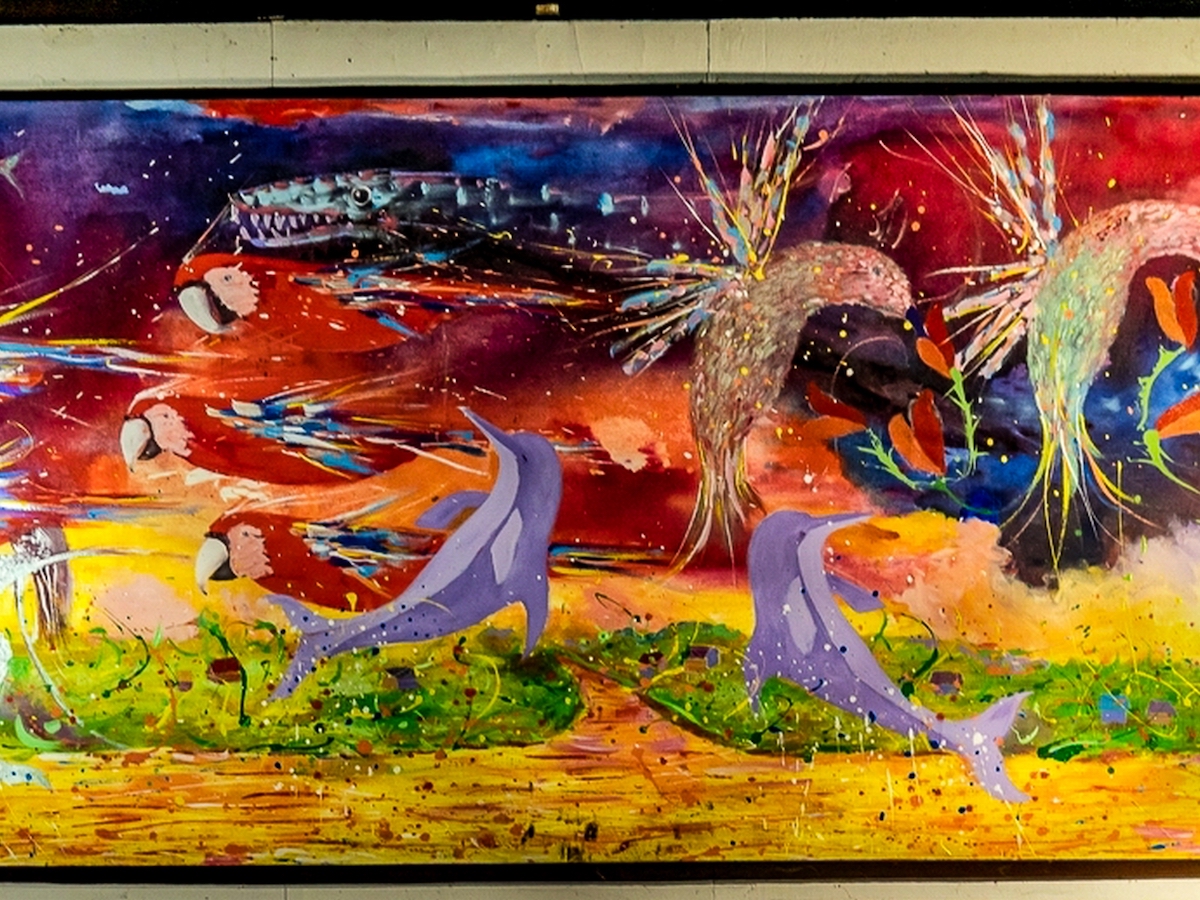 He has inspired many students of the Amazon movement of painting – a movement that captures light, color, and movement in the wild. The light in Pevas brought Grippa to the jungle in the 1980s. But it is the color and the kinetic energy that lives within the jungle that keeps him there.

“Color is a state of mind,” he tells me. “I try to make that color connect the mind with the environment.”

Grippa admits he always knew he was destined to be an artist ever since he was a child. “Color fascinated me.” He explains that the first time he saw paintings of Matisse, Cezanne, and others from the Impressionist Period, that he was enlightened in terms of the power of color.

Nowadays, Grippa’s varied body of works includes not only the Amazon but also indigenous portraits and religious impressionism.

The year of COVID

Then COVID-19 gripped the world in March 2020. During this time frame, the 79-year-old artist found it challenging to find inspiration.

When I arrived in April 2021, to interview him after a fast 6-hour boat ride from Iquitos, Francisco Grippa exclaimed how I was the first visitor since the pandemic shut down the world.

He lost over 540 people he was expecting to come to visit from Europe that year. They were to visit him in his Pevas studio. Art collectors from around the world buy his art; his works are in collections from Italy, Spain, France, Mexico, Israel, and the United States to Peru. And now, I was his most recent collector. After seeing his biodiversity painting, I was unable to depart Pevas without asking about it. The art spoke volumes to me; I knew I must have it.

Unfortunately, the years clearly have taken a toll on this artist. Now, he hobbles around with the aid of crutches, alone in his studio. I asked him about putting a “For Sale” sign over his property. But he makes it abundantly clear to me that Peru is where he wants his bones to stay. I hope I am not the last journalist to interview Francisco Grippa. 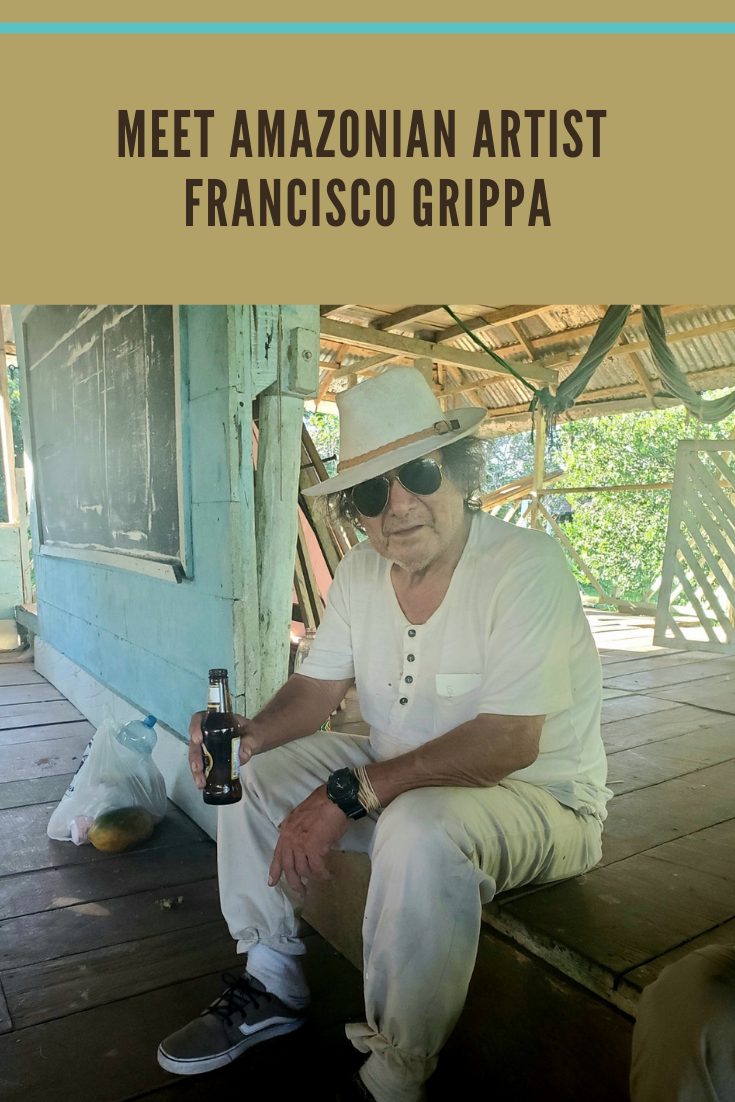