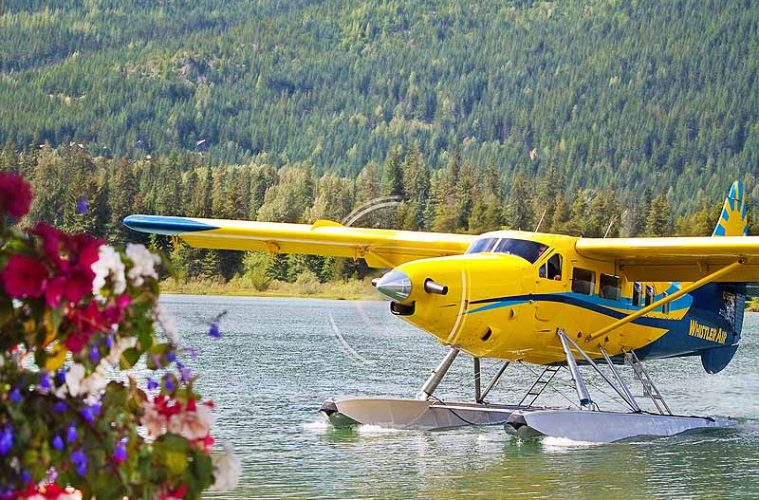 When I visit a destination for the first (and maybe last) time, I’m someone who wants to go macro, getting the lay of the land as quickly as possible. This means I will line up to take a gondola skyride if a city offers one (don’t miss the ones in Vancouver and Palm Springs) or a city trolley tour for a quick orientation spiced with local flavor (a great way to start your love affair with Barcelona).

But recently I finally got to indulge in literally getting the lay of the land by taking a number of air excursions. My husband, Warren, and I took four flightseeing tours in the past 12 months: two seaplane and one helicopter excursion during an Alaska cruise, and one helicopter tour on a holiday visit to the Grand Canyon.

After these superb experiences, I’m totally hooked on this fun and scenic way to spend a few hours. 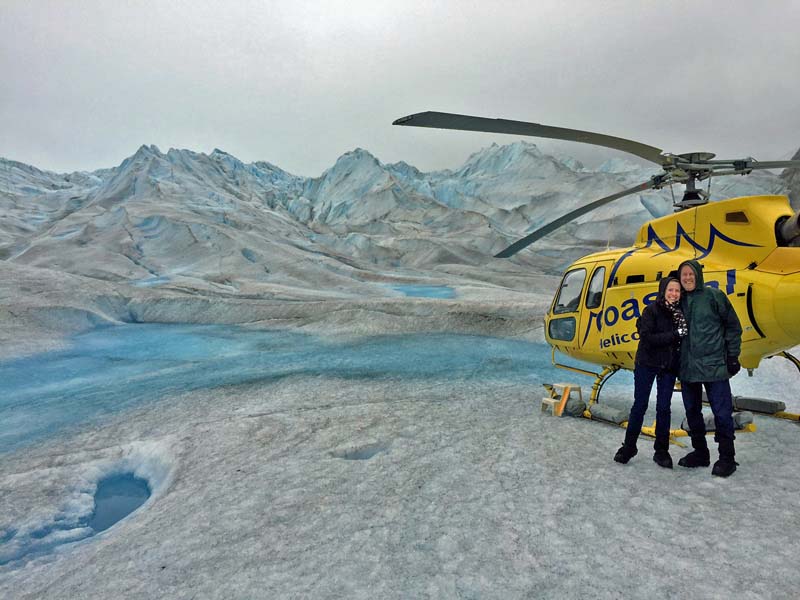 Flightseeing in Alaska with a glacier “moon walk” 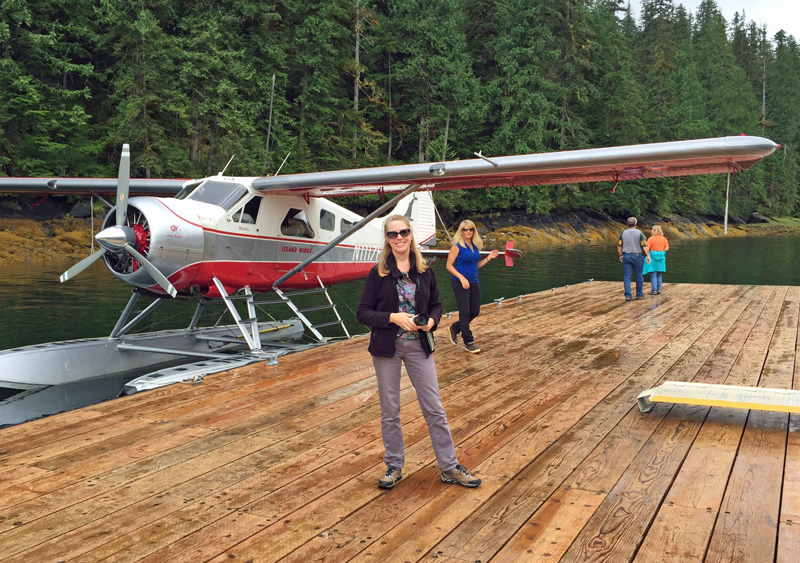 On a floating dock after touchdown for a pit stop in the Misty Fjords, only one other small tour group was at this vast quiet lake at the same time, watching a group of seals sunning nearby

Not your usual “three-hour tour”

When I told friends and fellow cruise passengers that my husband and I had signed up for flightseeing tours, I expected to hear, “Wow, aren’t you lucky!”

Instead I got these reactions: “Isn’t that expensive?,” “Oh, you’re brave!,” and “What if there’s bad weather?” 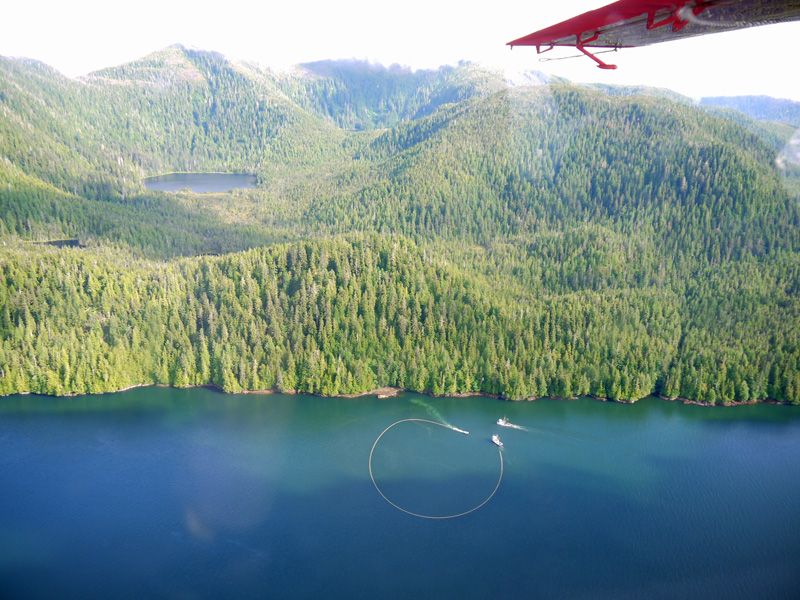 In answer to the first question, it is not cheap. The cost will depend on the length of the tour and what your tour includes (some include various touchdowns and/or a meal), but it can cost from $200 to $500 per person for less than two hours. I rationalized the cost by thinking of these hours as enriching YOLO experiences that would make much more meaningful memories (and photos) than, say, traipsing down another tourist town’s main street checking out all the gold jewelry. 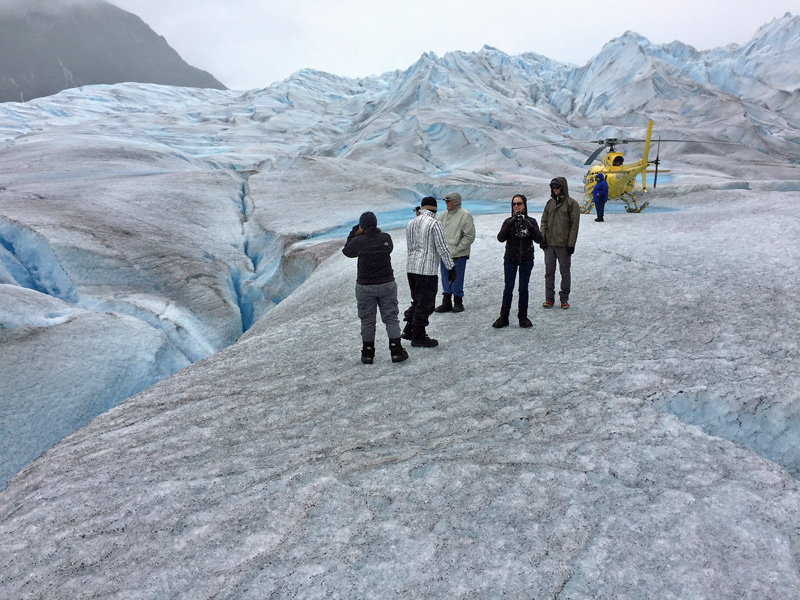 How do you walk around the otherworldly terrain of a glacier? Very carefully! (Boots with good grips provided by tour operator)

I was right: You pretty much can’t put a price on emerging from a helicopter to walk on an ice-blue glacier or landing by a dock on a remote Tongass National Forest island to watch black bears catching salmon.

Tour boats may nose into the vast Misty Fjords National Monument waters outside Ketchikan, but those tours can’t compare with how far into a region a plane can penetrate, nor how it can float above and through ancient granite fjords and cascading waterfalls.

And I will never forget everyone’s cries of wonder when the vast ponderosa pine forest below our speedy Maverick helicopter abruptly dropped away as we suddenly found ourselves in the cavernous Grand Canyon. 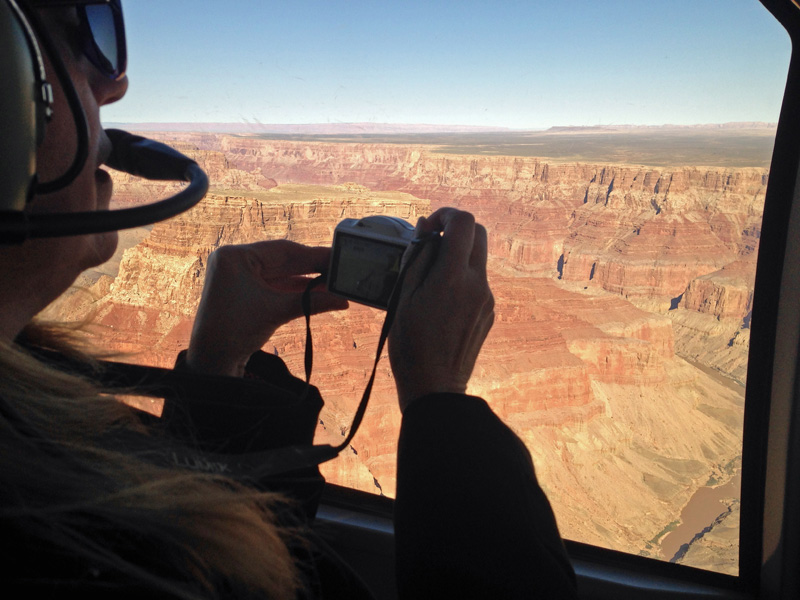 You can see for miles above the Grand Canyon, and take miles of photos, accordingly

As for bravery, it didn’t occur to me to be scared of these flights. The potential to see amazing things was too alluring. By choosing licensed flight operators with long track records and great TripAdvisor reviews, I figured I would be safer in one of these seaplanes or helicopters than driving around my neighborhood where everyone seems to be driving-while-texting. 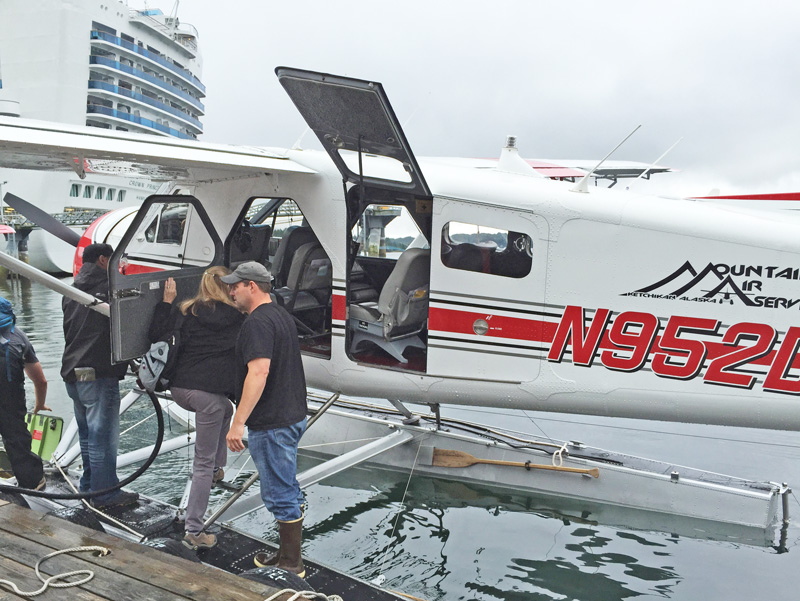 Author climbing into the co-pilot’s seat of her first seaplane ride… off to see some bears eat salmon!

As I expected, the guides for these tours were seasoned licensed pilots/guides (often ex-military), who safely shuttle around thousands of people each year in well maintained and inspected aircraft. Their pride about the vehicles they pilot and what they do for a living is palpable. What sets them apart from your typical puddle-jumper pilot, however, is that they are also trained narrators and question answerers – in other words tour guides. We learned so much from them while filling our eyes with scenic vistas. 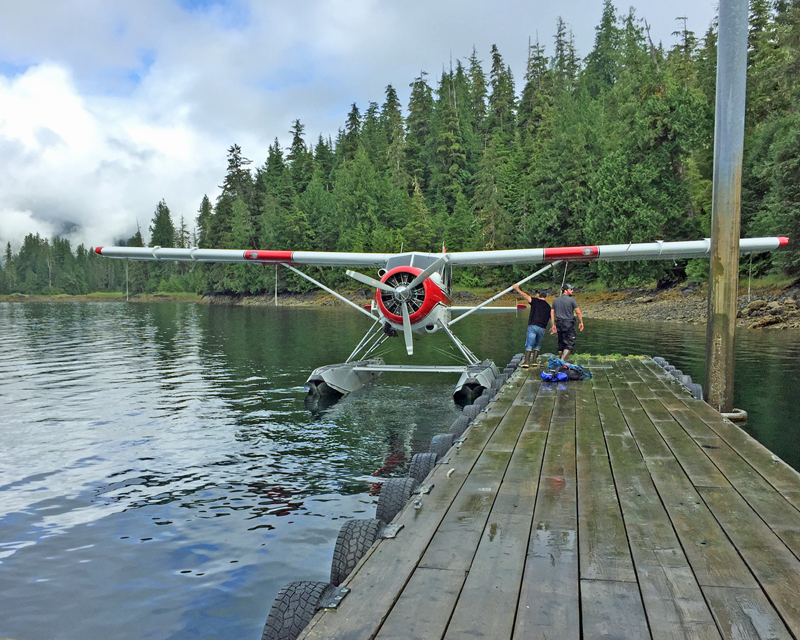 Pilots/guides from Mountain Air Service who flew the plane AND led the trek to the bears’ feeding grounds at Traitors Cove, an isolated island miles from Juneau

I was impressed by the smoothness of all our flights, including the takeoffs (the first time you lift straight off the ground in a whirlybird is unforgettable) and landings (landing on water is so much less jarring than the commercial flight landings we’re used to). 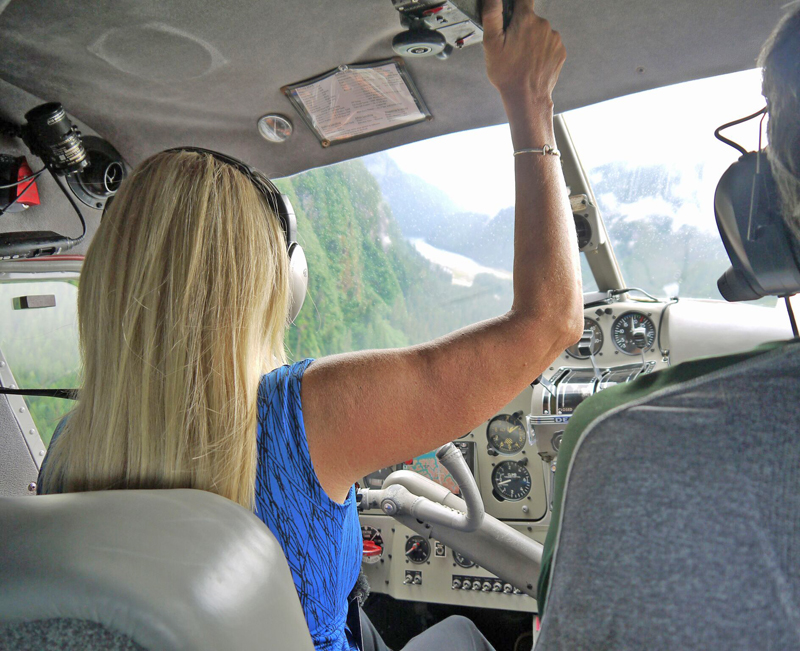 That said, our tour of the Misty Fjords, was marred a bit by a passenger who was, in a word, petrified. Small touring planes like these only take six passengers (that’s so everyone gets a window seat), and you couldn’t miss the distress of this woman. (It turned out her daughter had talked her into the tour.)

Our wonderful pilot and tour guide, Michelle Masden, owner of Island Wings and flying Alaskan seaplanes since 1993, had seen all this before and soothed the woman enough so that she was smiling (nervously) at the end, but my takeaway is that if you’re so scared about the idea of flightseeing that you won’t even look out the windows, then don’t go. 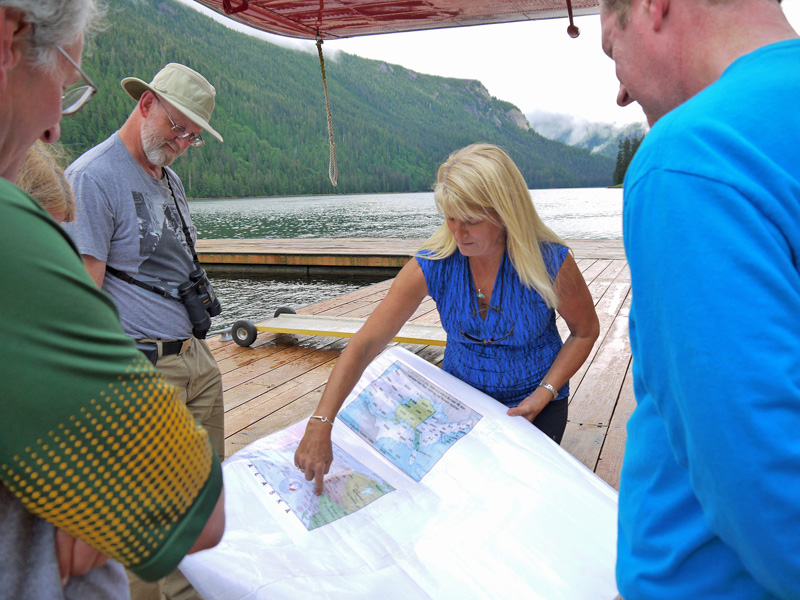 But what about the weather?

Of course, flying tours are more susceptible to weather woes than more land-based tours. Poor visibility and high winds are the two main things that will ground you. I was comforted to learn that flight decisions are overseen by air traffic controllers, rather than the desires of passengers or tour pilots. 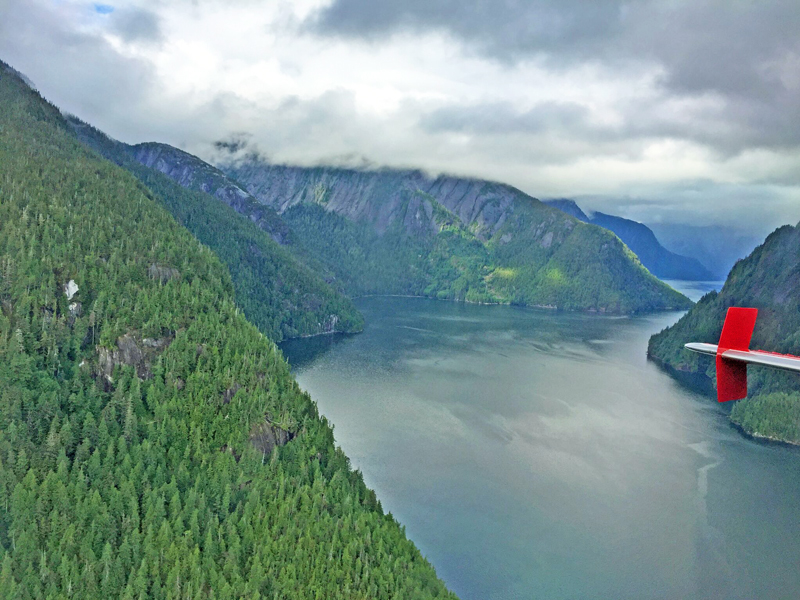 Sun emerges from the mist as we float serenely by an array of cliffs, gorges, fjords and waterfalls in the Misty Fjords

Weather did get in the way of one of our excursions. We had pre-paid for a two-part glacier tour outside of Juneau in July, with the first part choppering us up to the top of a glacier where a training camp of sled dogs were summering. I was crushed when the folks at Coastal Helicopters informed us that the weather was too socked in to fly up to the dog camp. Our consolation prize was that they said we were cleared to do the second part of the tour: a walk on the lower part of the glacier. (They refunded us for the cancelled Part 1.)

The swift helicopter flight along the foggy bay to the glacier was breathtaking, passing over miles of pristine forested islands as rain streamed across the copter’s windows. It was my first time sightseeing by helicopter and my head constantly swiveled, taking in the nearly 360 degree views. 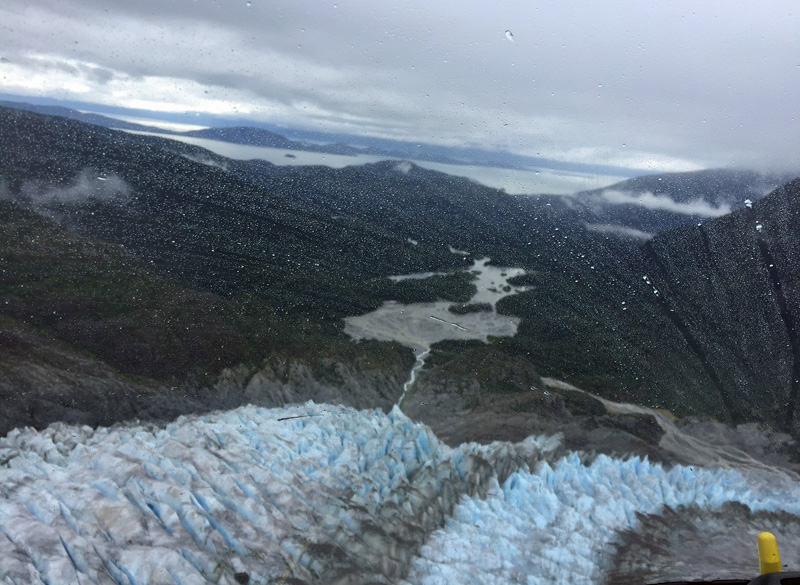 Once we alighted on the glacier, we held our breath while stepping down onto the gritty blue ice (with the pilot lending each of us a helping hand down the steps). The tour company had given us rain gear and special boots for walking on the glacier, and all went well, if too quickly. (Thirty or so minutes later we were air-bound, heading back to Juneau’s heliport and the town’s gold jewelry shops.) 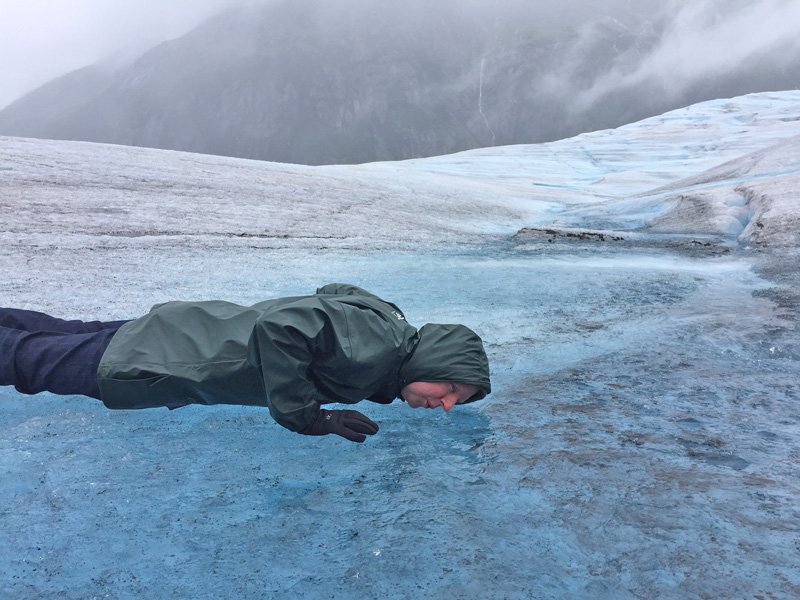 Encouraged by our guide, slurping up a quick taste of pure glacial meltwater

It was only later when I saw postcards of the area on a sunny day that I realized how many breathtaking mountain views we’d missed because of the socked-in weather. Still, our introduction to this novel way of sightseeing was worth the price. We were hooked. 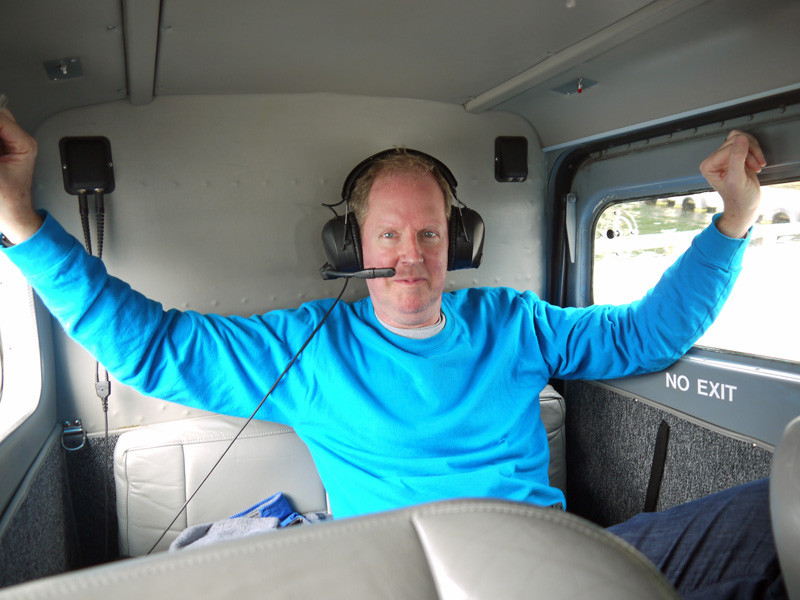 Author’s husband Warren in the back row of a seaplane – snug for two but fine for one, with lots of views

All the aircraft we traveled in were kitted out for tourists, with comfortable leather seats and huge, clear windows to look out of. There’s not a bad seat in the house (well, except during our helicopter jaunt up to the glacier which was a tad squishy for my husband in the back row, due to a few extra-large passengers).

Our seasoned tour guides filled our ears with factoids, custom music playlists and spells of “look at this view” silence in the perfect places. They gladly took pictures of us and even gave us keepsake DVDs of our flights at the end. Not that I need a DVD to remind me of the joy of flying above some of the most awesome scenery you can imagine! 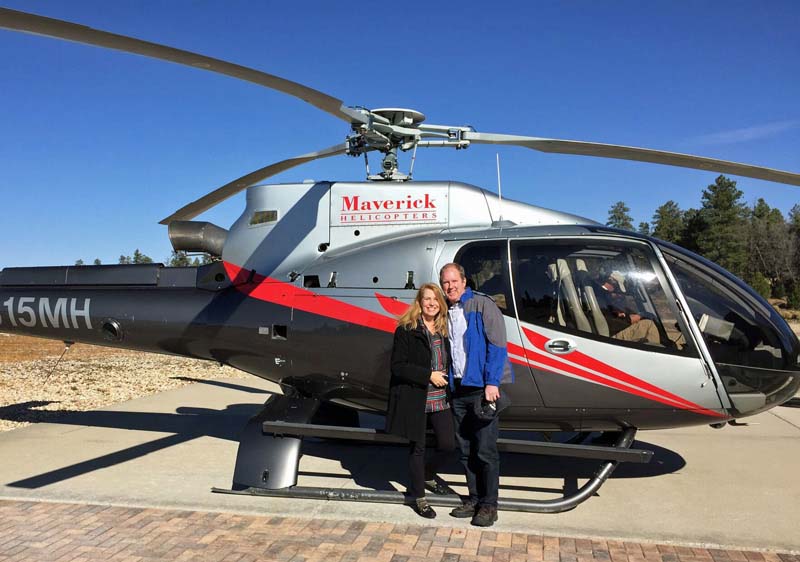 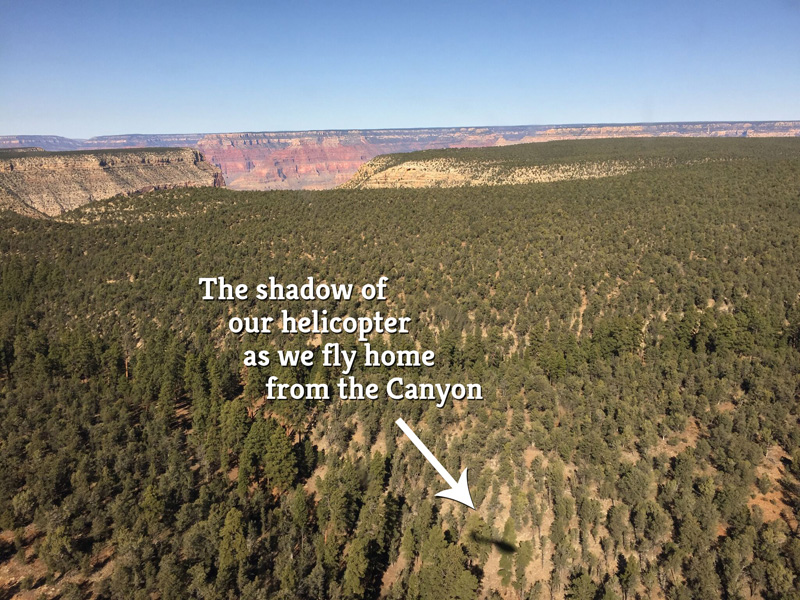 Sliver of an Alaskan panorama from inside a seaplane

Every flightseeing tour site has a list of FAQs, but here are some things I wish I’d known before I went on my tours: 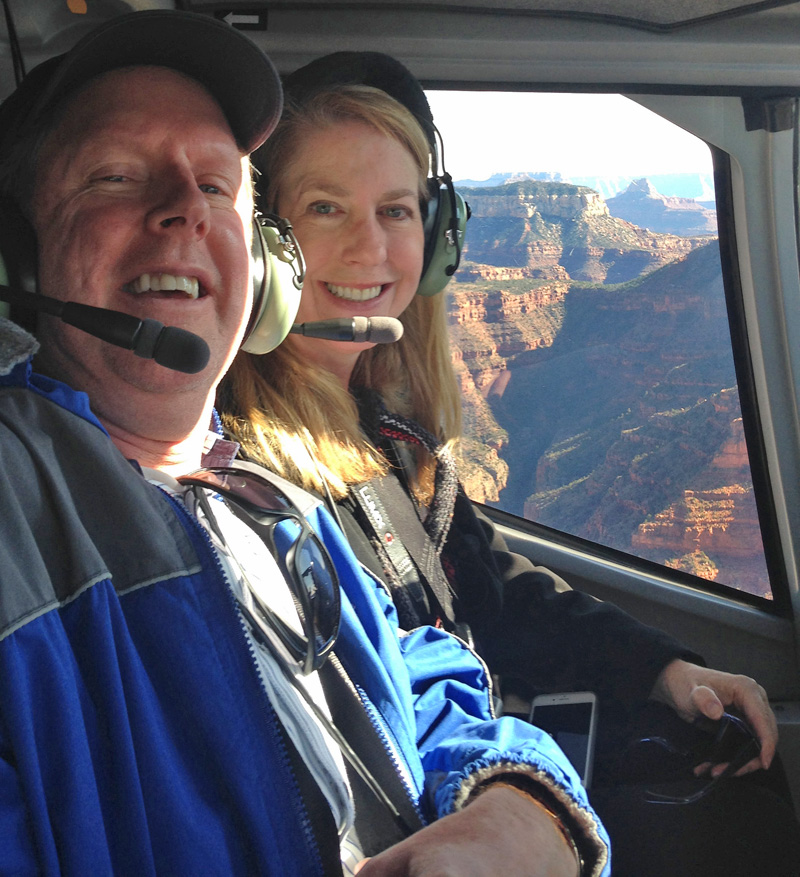 Fourth and last flightseeing tour of the year… we’ll be doing more! 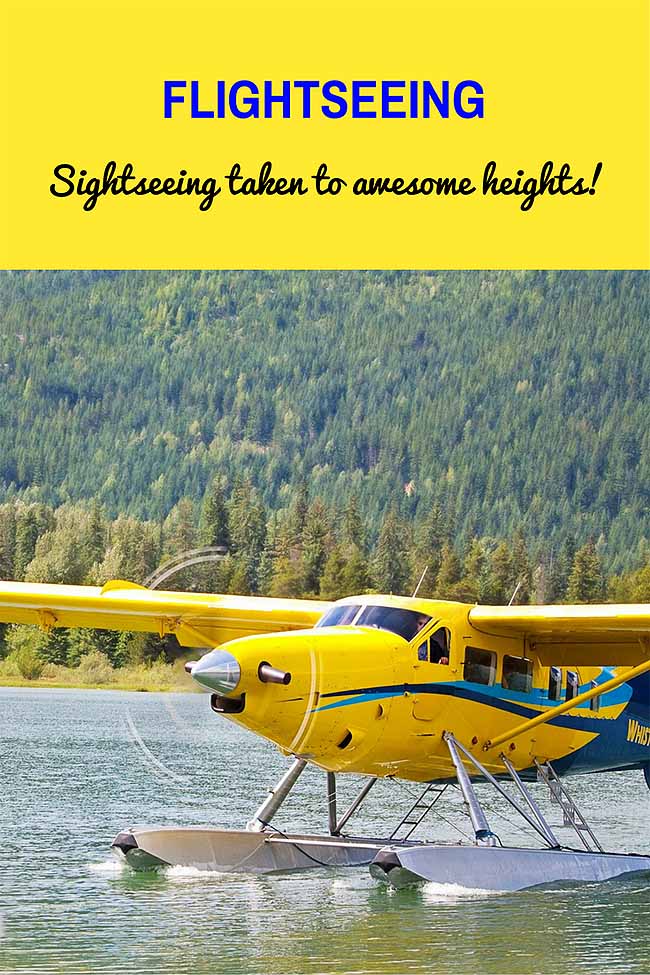 Have you gone flightseeing? Were you scared, or was it a thrill of a lifetime?