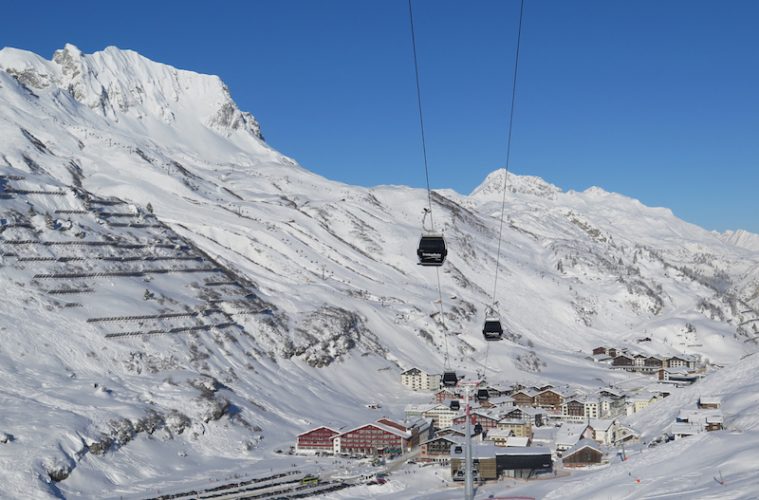 Luxury alpine resorts in Europe are enjoying a banner snow year, and it’s not too late for outdoor enthusiasts to reap the rewards.

These five resorts deliver excellent skiing and riding, along with plentiful cross-country and snowshoe trails and tobogganing runs for all ages: Think descending under starry skies after a fondue dinner at a mountain hut.

Not only does it have the terrain, but it also has the elevation—nearly 10,500-feet at the highest points—to all-but-guarantee snow.

I loved the ease of staying at the all-inclusive, ski-in/out Club Med Val Thorens Sensations (Club Med Val Thorens Sensations), which provides one-stop shopping for vacation planning, making it easy to keep within a budget. Not only are lodging, meals, drinks, and nightly entertainment included, but also fitness programs, ski passes, and lessons. Plus, you can advance book everything from air and transfers to rental equipment, ski guides, and ooh-la-la spa treatments.

View from a balcony at the Club Med Val Thorens

For a haute luxury experience, set your sights on Courcheval.

Even if you don’t book a suite at one of the resort’s eight five-star hotels, including three palaces, you’ll be surrounded by the best. That includes dining at Le 1947, the resort’s first restaurant to earn three stars, or one of Courcheval’s four two-star or three one-star gourmet immersions.

Andermatt occupies a high alpine valley in central Switzerland sited at the intersection of the Gotthard, Furka, Göschenertal, and Oberalp mountain passes. Two areas laced with trails face off across the village: Gemmstock, favored by experts and freeriders, and the sun-bathed slopes of Gutsch.

Thanks to a $1.8 billion development plan, the skiing and village have morphed into a destination resort, SkiArena Andermatt-Sedrun. The town’s split personality—the classic, older village on one side of the railroad tracks, and the contemporary one rising on the other—offers the best of both worlds. Now, Andermatt’s areas and Sedrun’s and Disentis’ slopes, on the other side of the Oberalpp Pass, share one ticket, which is also valid on the train that chugs up and over the pass. High-speed lifts and new trails unite Andermatt with Sedrun.

New this season: the Après-Ski Train, with a bar and lounges, operates on four runs between Andermatt and Disentis.

By the way, for train-connected Nordic fun, head to the Obergoms, just over the pass.

The five-star Chedi Andermatt, a handsome blend of Swiss and Asian design, takes the work out of vacationing here. Ski butlers handle equipment; there’s a full-service spa; lounges range from soaring to intimate; and the hotel’s three restaurants include one specializing in sushi. For cozier digs, book a room at masterfully renovated and eco-friendly, three-star River House. The boutique hotel’s bar has frequent live music and is home to the Whiskey Club of Andermatt. Don’t miss Gasthaus Ochsen for a traditional fondue dinner.

The linked villages of Crans and Montana, prized for their sunny weather and views encompassing the Matterhorn and Mt. Blanc, occupy a balcony above the Rhone Valley village of Sierre.

Crans-Montana lacks the glitz and trendy glamour of some other high-end Swiss resorts, but many well-heeled international jetsetters prefer its unpretentious vibe.

Even on a gray day, the views from the mountains of Crans-Montana are splendid

Predominantly easy-going runs lace Crans-Montana’s three interconnected peaks, but those seeking challenges will find them on the resort’s World Cup runs, the nearly 7.5-mile Piste Nationale, and its off-piste terrain. This is a fine place to try snow biking—either a thrilling run down the mountain or easier routes looping the golf courses or through town. In any case, do pause at L’Instant Chocolate, where French pastry chef and renowned chocolatier David Pasquiet makes irresistible temptations.

Ride a snow bike down the mountain or through the town and onto the golf course at Crans-Montana, Switzerland

The Hotel Royal puts everything from chic boutiques to peak-climbing lifts within walking distance. If you’re lucky, the concierge may be able to score lunch reservations at La Cabane des Violettes, one of the resort’s mountain huts. Otherwise, aim for dinner at l’Hostellerie du Pas de l’Ours, both under the direction of Michelin-starred chef Frank Reynaud.

Davos first gained fame as a spa center for those with respiratory issues, later rising to prominence as host of the annual World Economic Forum. Rail, road, and one of Europe’s longest ski runs connect boxy Davos to traditional Klosters, a favorite of British royals. 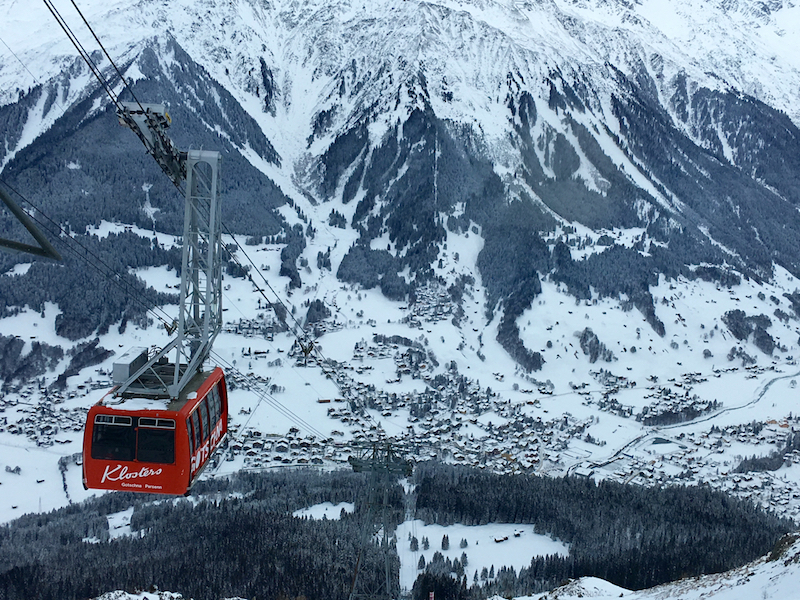 Even if you don’t stay in Klosters, be sure to ski down to the traditional Swiss village from the summit of Davos

Choose from numerous alpine options: Parsenn is the biggie and links to Klosters. Snowboarders love Jackobshorn; free riders favor Pischa; Madrisa and Rinerhorn cater to families; and Schatzalp/Strela attracts winter hikers and those who prefer tows to chairs.

While sleeping in Parsenn’s Igloo Village on Parsenn might be a bit too chill, do stop in for midday fondue and mulled wine.

Choose your passion- groomers or powder at Davos-Klosters

The five-star Hotel Seehof Davos is just steps from the funicular accessing Parsenn’s slopes. The visually arresting Intercontinental Davos—aptly nicknamed the golden egg—offers stellar views; if you don’t stay, consider indulging in Studio Grigio’s nine-course surprise menu. In Klosters, aim for a room at the Hotel Walserhof or at least a meal in its a Michelin-starred restaurant.

After a morning of skiing in Austria’s Arlberg, don’t skip on dessert

Dip into St. Anton for the expert off-piste skiing and the best nightlife, but call it a night in one of the quieter villages.

Postcard Lech comes complete with a covered bridge over the river, horse-drawn carriages, and an eye-candy church. Here you’ll also find Strolz, the Saks of ski boutiques, where you can sip champagne while browsing the season’s must-haves and even purchase custom ski boots. 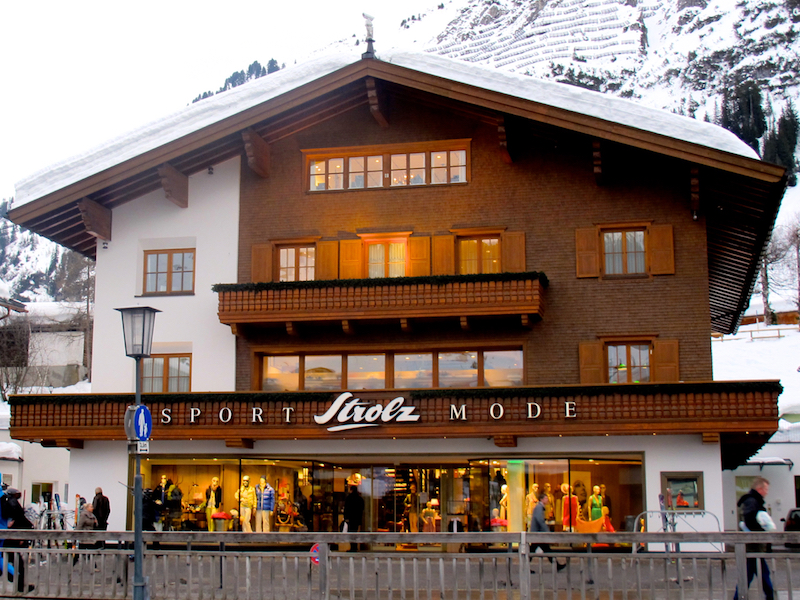 Check into one of three properties with gold-medal Olympic connections: the five-star boutique Kristiania Lech, now run by Gertrude Schneider, daughter of 1952 Olympian Othmar Schneider; the four-star Hotel Kristberg, where 1964 Olympian Egon Zimmerman still loves to charm guests; or the four-star superior Hotel Montana in Oberlech, where 1992 Patrick Ortleib is the second-generation hotelier. If you really want to escape the crowds, reserve a suite at the five-star Sporthotel Lorunser in sleepy Zurs, where the American Plan rates include all meals. If you’re a nightlife fan, check into the four-star superior Hotel Schwarzer Adler, a family owned hotel with roots dating back to the mid-16th century.

The village of Lech straddles a river