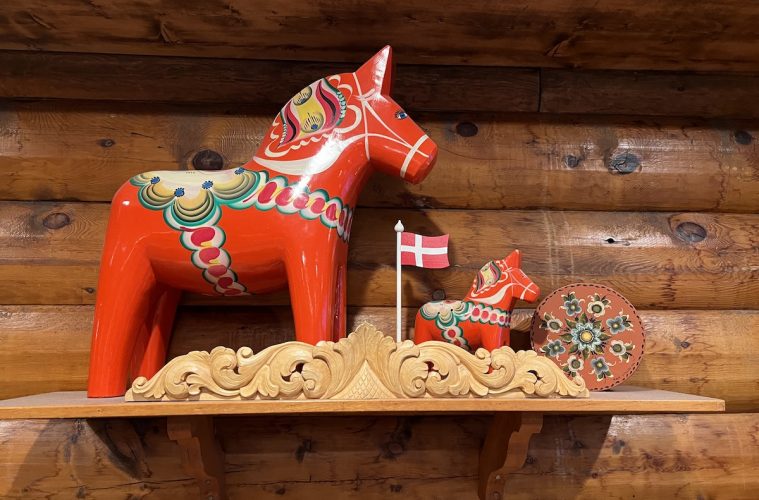 The fish boil is one of the many Scandinavian traditions and cold-weather activities to be enjoyed in Door County, Wisconsin.

With an understated but well-practiced flourish, master boiler Pat McMurtry tosses a tin can of kerosene on a wood fire outside the White Gull Inn. Freshly caught whitefish and baby potatoes are boiling in two wire baskets set inside a large kettle.

The cooking area explodes in a fireball and the crowd gasps, shrieks and recoils with delight. The short-lived flames obscure what’s happening. We don’t really see the pot boil over sending all the fats and oils at the surface of the heavily salted water over the edge. 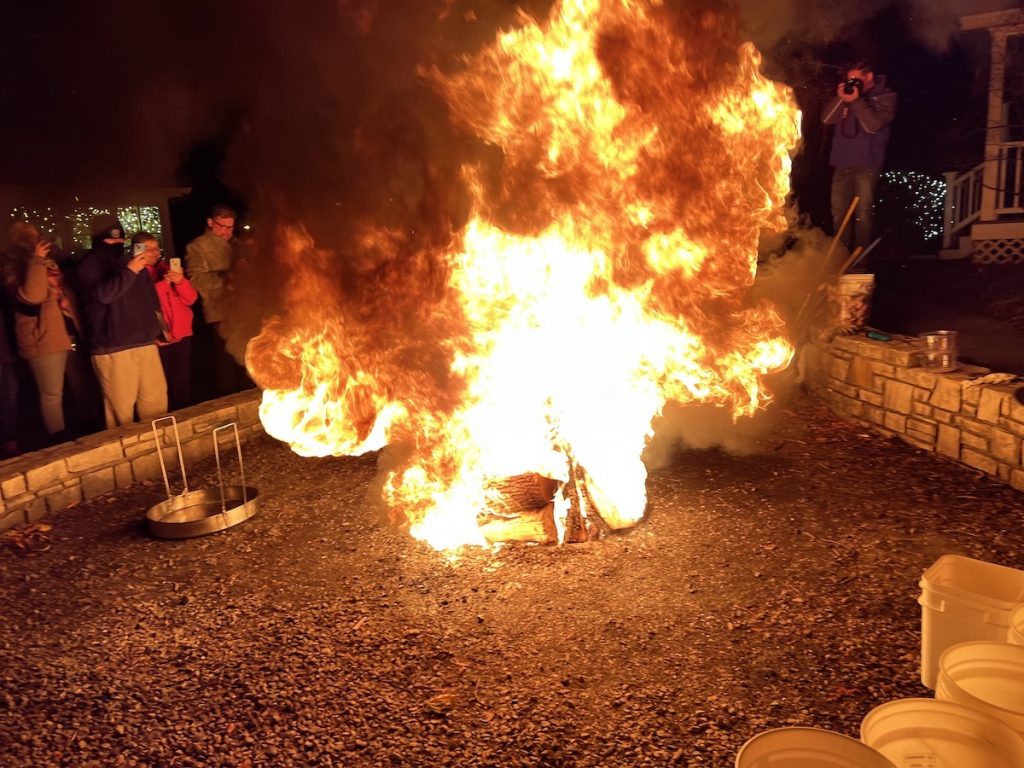 Two cooks rush into the stone-lined firepit and transport the baskets loaded with perfectly cooked fish and potatoes to the kitchen. Since it’s a brisk December night in Door County, Wisconsin, the crowd gathered for this unusual dinner theater also rushes back inside. But not before giving McMurtry a heartfelt round of applause.

Ten minutes later, supper for an entire dining room is ready. Chunks of Lake Michigan whitefish are mild and surprisingly tender, and you have to eat around the skin and bones. Red new potatoes are sweet and creamy. A little piece cut off each allowed the salt to penetrate during cooking. Coleslaw is nicely chilled with a welcome hint of caraway. And there’s plenty of homemade bread.

Despite the enormous amount of salt that McMurtry put into the pot — his “pinch” was actually several pounds — the food isn’t salty. I squeeze lemon wedges over my meal. Others reach for salt shakers. But everybody douses their fish and potatoes in melted, clarified butter.

“It’s a very ancient way of cooking — that’s what attracts me to it,” McMurtry tells me as he prepares to boil another round of fish for second helpings. “It’s the history,” he adds.

The fish boil tradition migrates to the U.S. 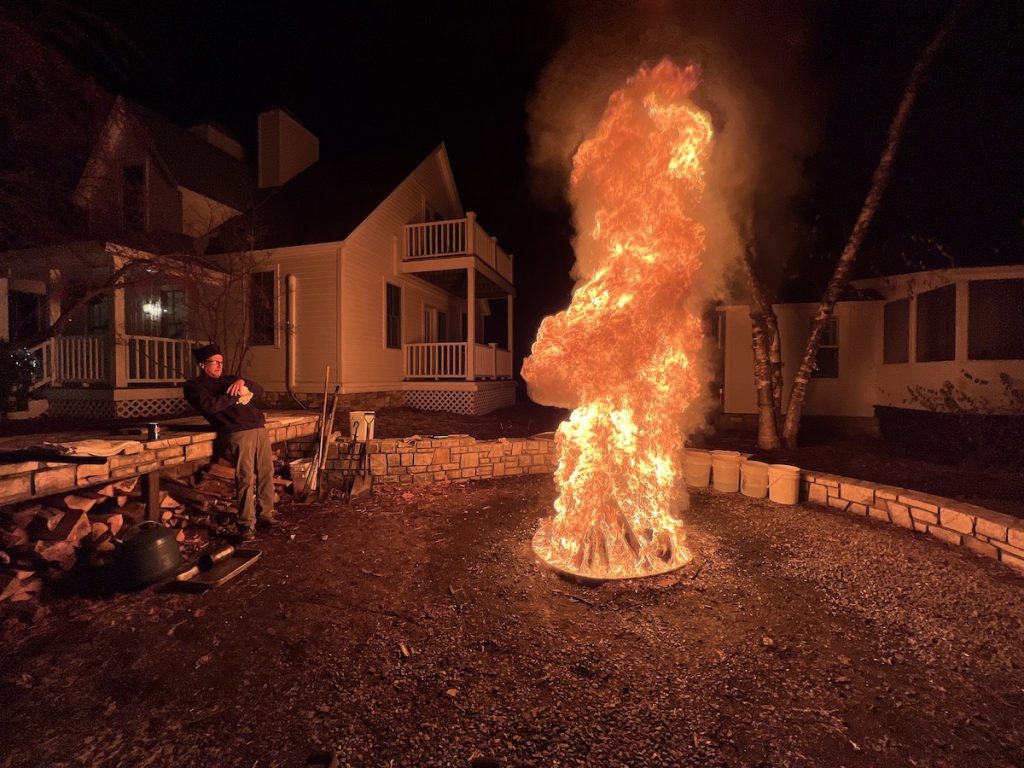 Fish boils, a Scandinavian tradition, harken back to the mid-1800s when settlers arrived in this part of Wisconsin from Sweden, Norway and Iceland to work in the forests.

“They brought a tradition of boiling fish. And after they found we had fish here, potatoes were the first thing they could grow here,” McMurtry explains. “Boiling fish and boiling potatoes at the same time seemed to make sense. Times were hard back then. There were no roads. There was no way to get around. It was literally tough.” 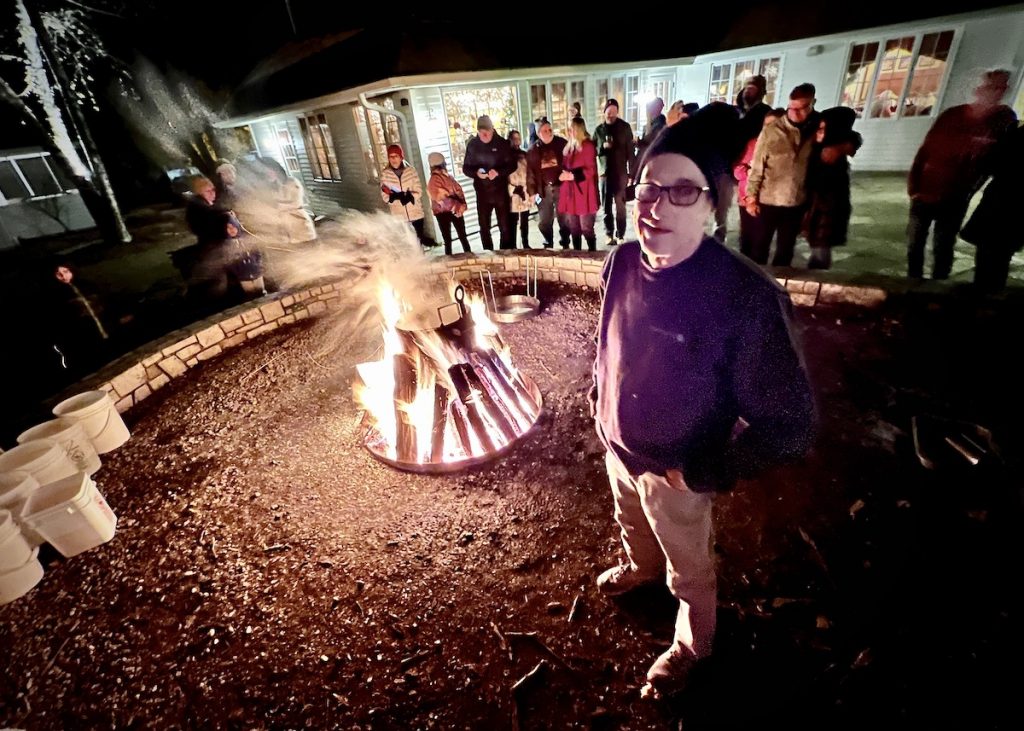 After the lumber camps closed, fish boils became popular at church picnics, family reunions and community fundraisers before moving into restaurants. A handful of restaurants still do them (some even add onions), most seasonally and some year-round.

In Fish Creek, the White Gull Inn fish boil dates back to 1959. It happens on Friday nights in winter and four nights a week in summer. And it always ends with cherry pie, since Door County is renowned for its cherries.

Door County is in Wisconsin’s “left thumb.” The peninsula edges Lake Michigan on its east side, Green Bay on its west side, and Washington Island and Rock Island off its northern shore.

The county is a 2.5-hour drive northeast of Milwaukee and 4.5 hours from Chicago or Minneapolis. It gets its name from Porte des Morts (Death’s Door); this strait linking Lake Michigan and Green Bay was once the most treacherous stretch of water on the Great Lakes.

While most of Door County’s two-million annual visitors come in summer, those who arrive in winter experience what Scandinavians call friluftsliv.

Pronounced free-loofts-liv, the term translates as “open-air living.” Popularized in the 1850s by Norwegian playwright Henrik Ibsen, it is to the outdoors what the Danish concept of hygge (coziness) is to the indoors.

“(The term) certainly harbors the spirit of embracing the winter instead of being afraid of it and trying to avoid it,” says Destination Door County chief communications officer Jon Jarosh.

Experiencing a bit of friluftsliv 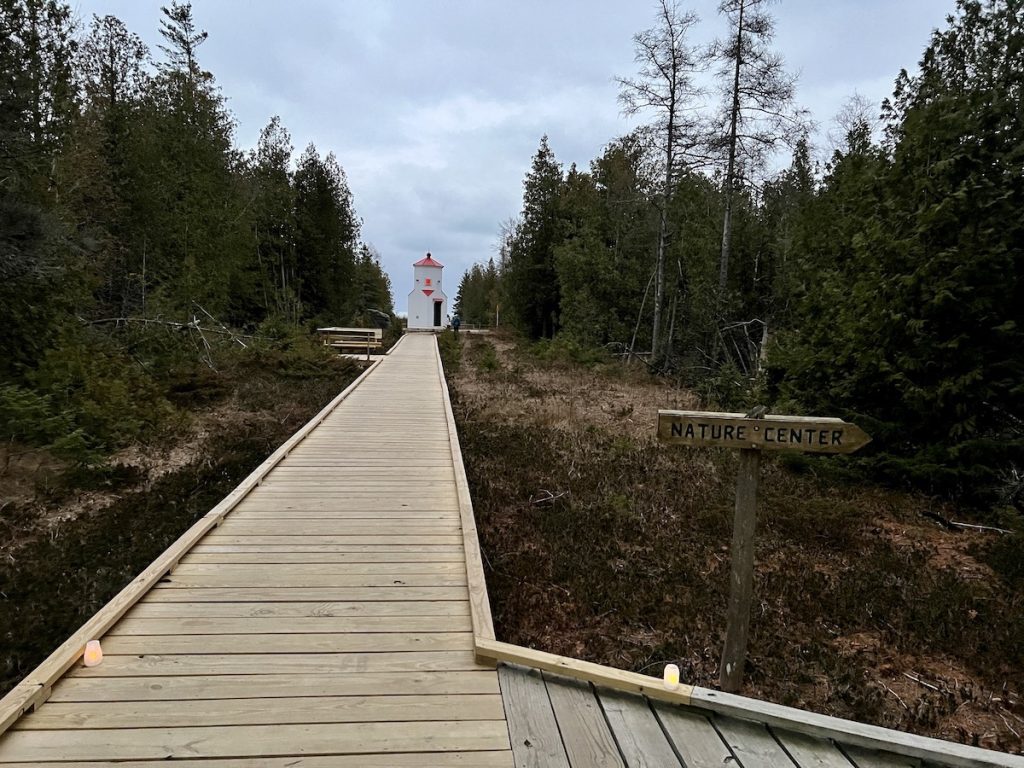 In between meals, I gravitate to the outdoors, going on a whirl around Fish Creek’s Cottage Row with Mayberry’s Carriages. And I hike in both Peninsula State Park and along the last few miles of Ice Age National Scenic Trail. 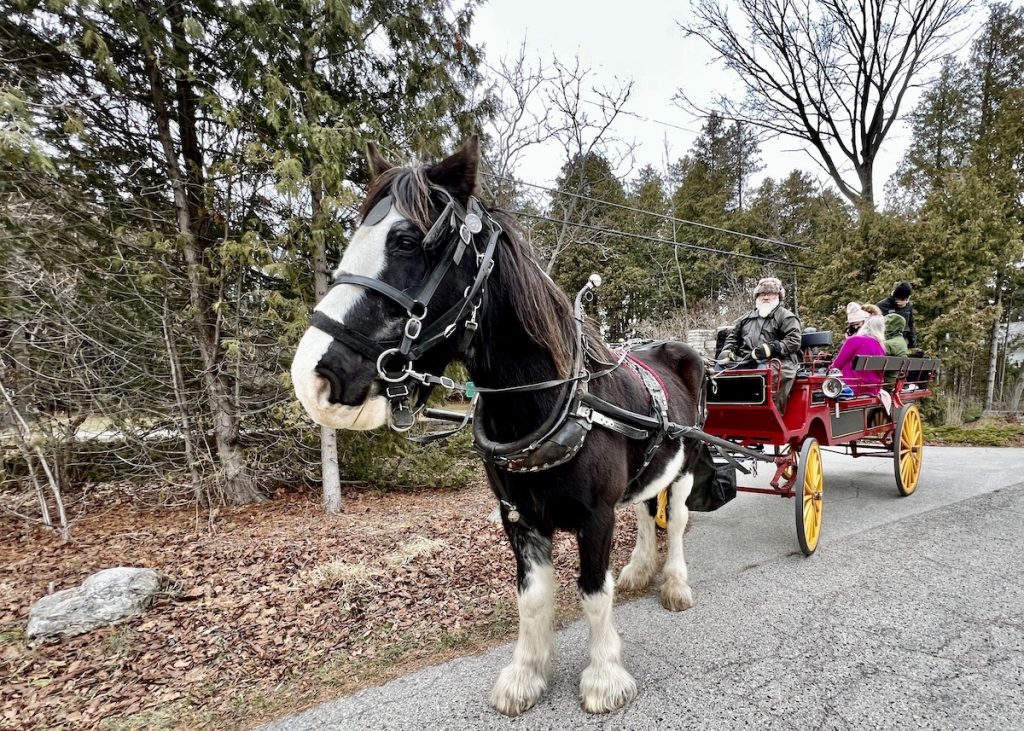 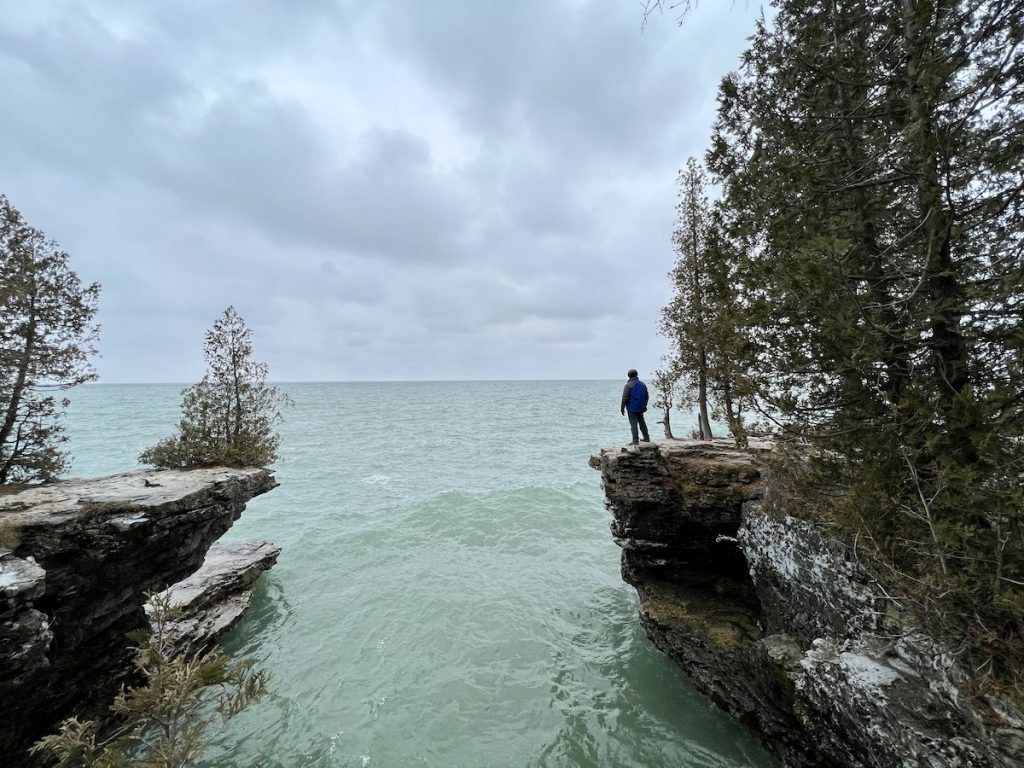 At the Ridges Sanctuary, volunteer Bill Wolff shows me around Wisconsin’s first land trust. The 1,600-acre sanctuary is named for its distinctive topography — a series of ridges and swales formed by the movement of Lake Michigan over the past 1,400 years.

The sanctuary has an accessible boardwalk that stretches nearly one-third of a mile between its nature center and two unique range lights that still help sailors navigate Baileys Harbor. 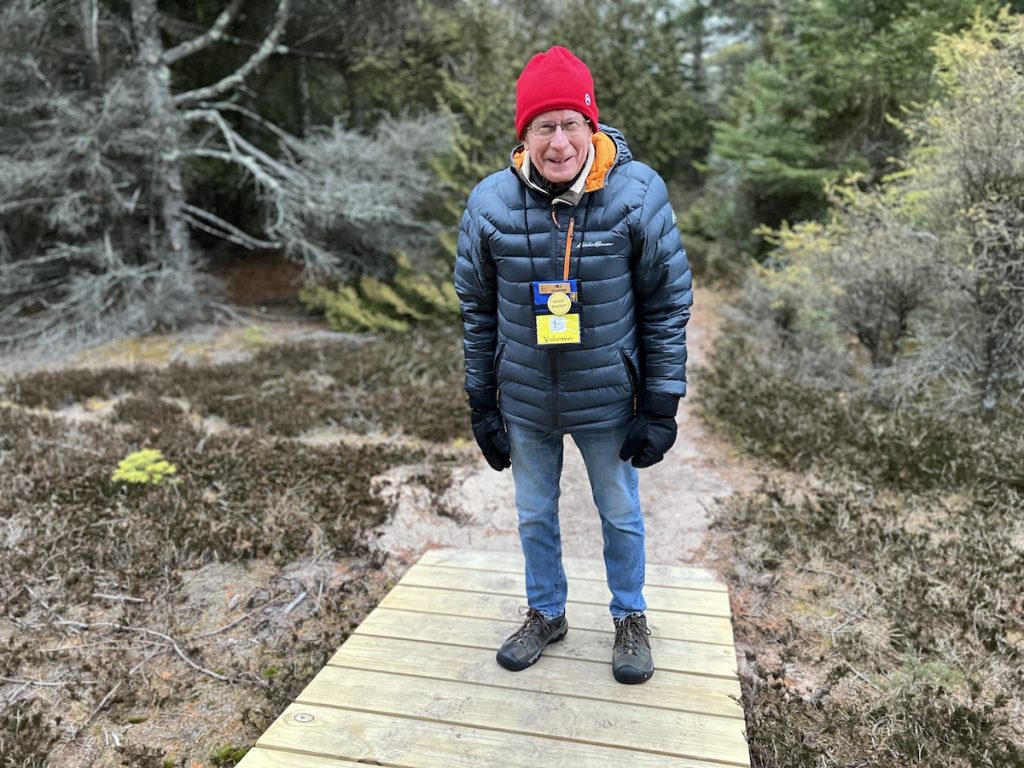 And as cold winds blow in off Lake Michigan, I visit Björklunden vid Sjön (Birch Forest at the Lake) at Lawrence University’s north campus. Volunteer Jane Whitney shows off Boynton Chapel, a small wooden chapel handcrafted by Winifred and Donald Boynton between 1939 and 1947 in a late 12th-century Norwegian stave church (stavkirke) style. 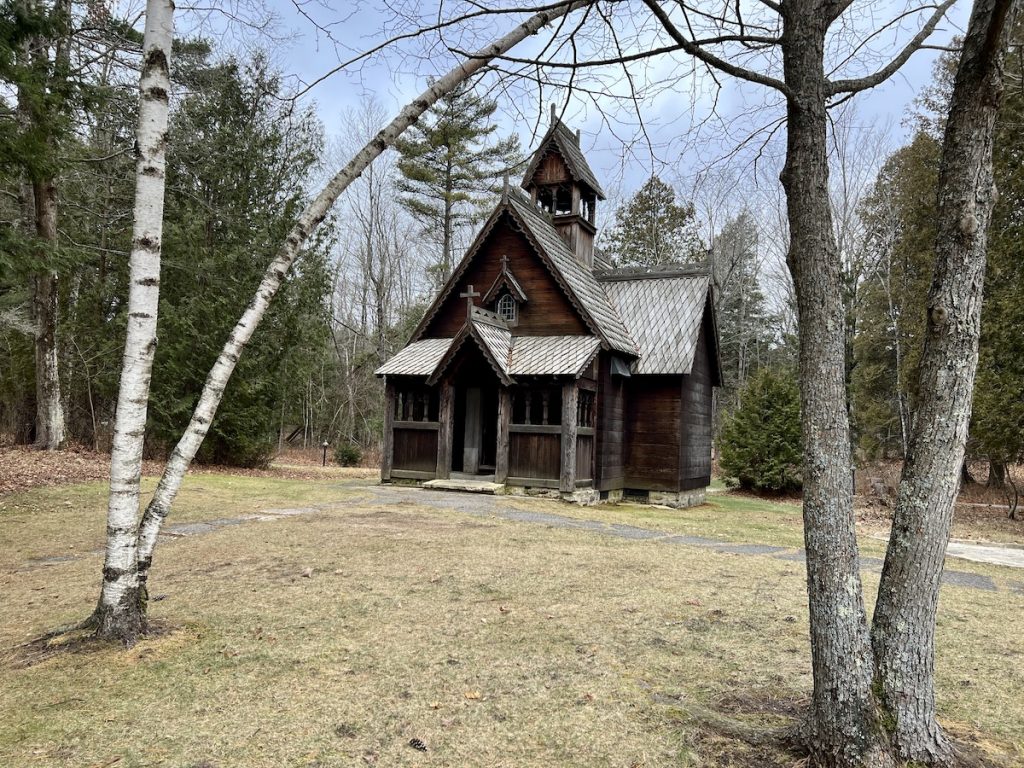 Working up a cold-weather appetite in Door County

All this fresh air does wonders for my appetite. SoI check out most of Wisconsin’s classic eats, including fish, local cheese curds and cherry pie.

I eat cherries wherever I can. At Door County Coffee & Tea’s café, that means baked oatmeal with dried cherries and toast with chopped cherry jam. 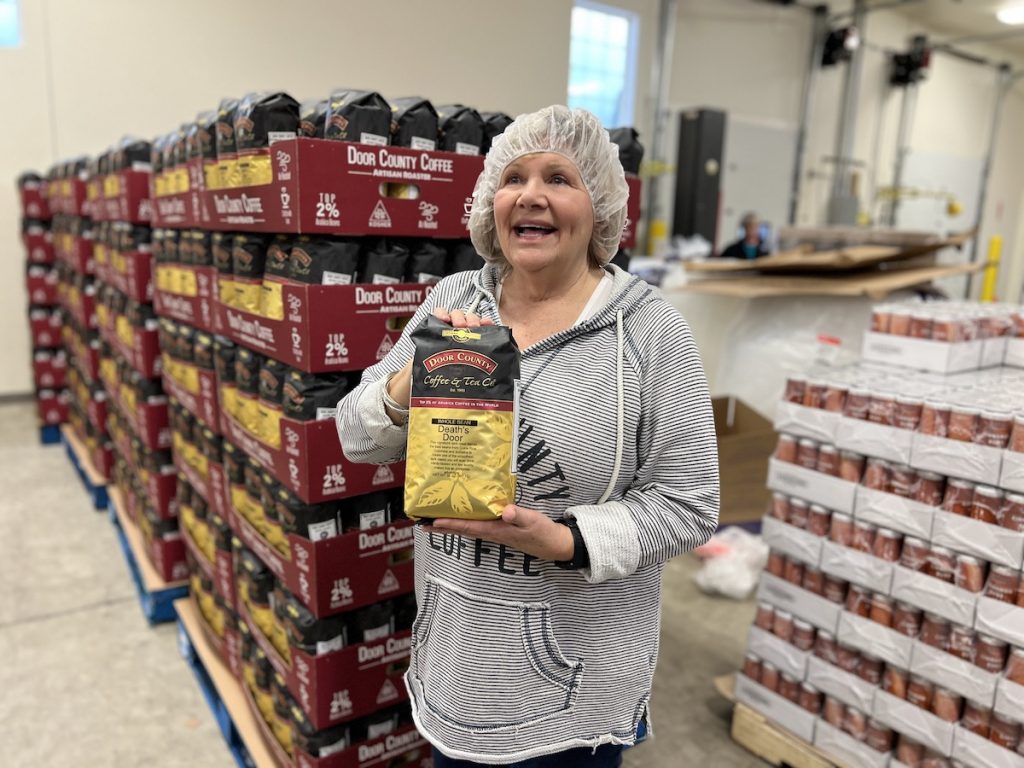 At Julie’s Park Café & Motel, that means the Door County Cherry Salad plus bites of the cherry crêpes and cherry-stuffed French toast. At Hatch Distilling Co., I enjoy a Cherry Smash. 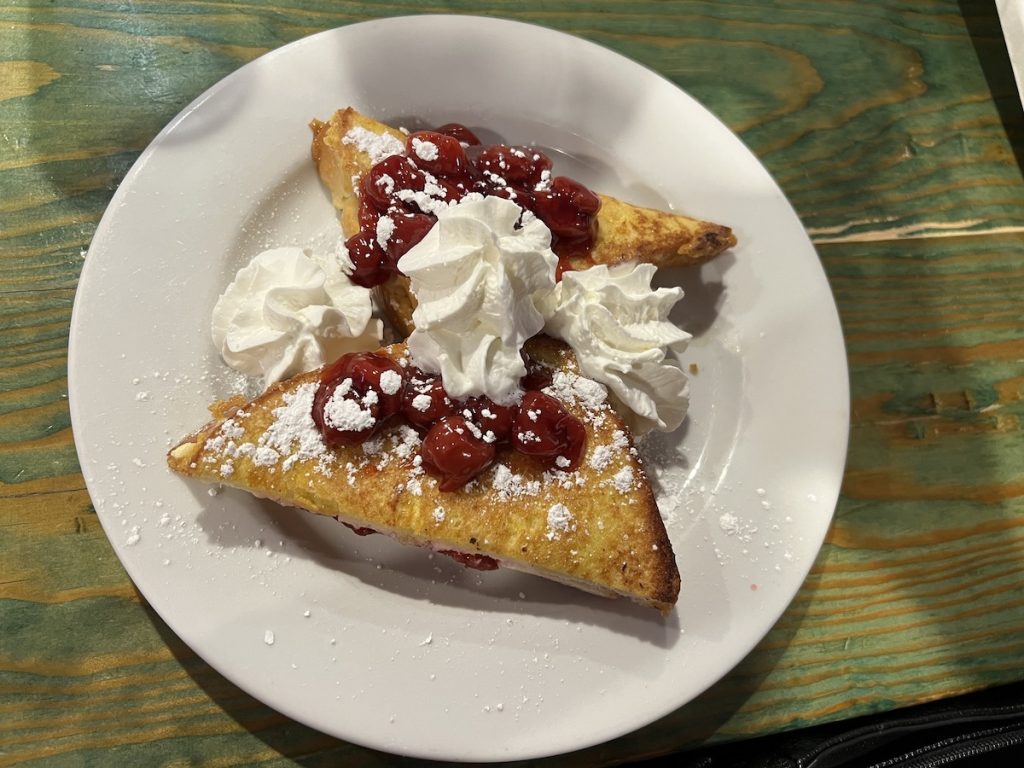 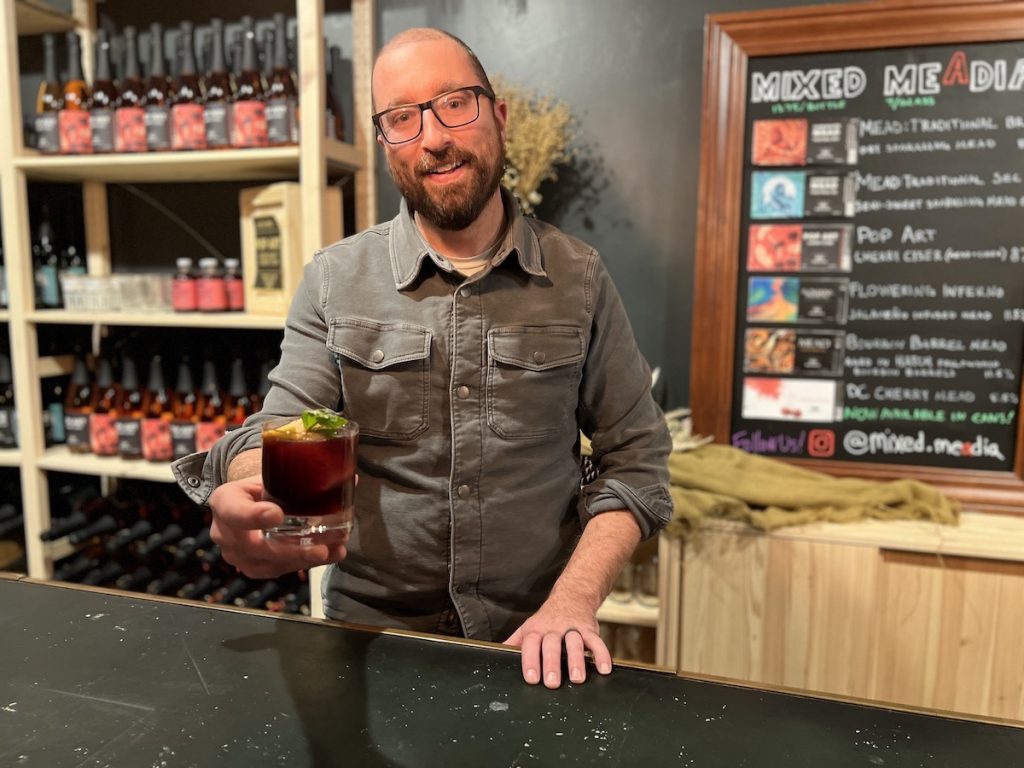 Besides that memorable fish boil, the Door County meal that stands out is my last one of Swedish pancakes with lingonberries at Al Johnson’s Swedish Restaurant & Butik, which has drawn people to Sister Bay since 1949. 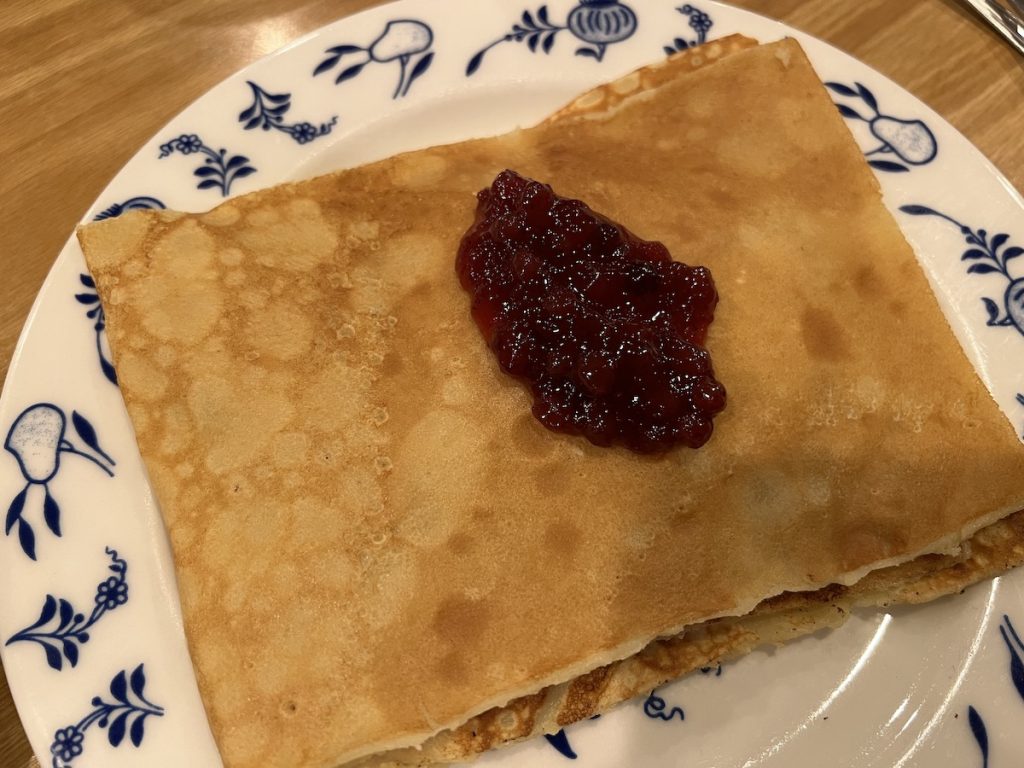 From May to October, the family-run restaurant famously lets goats graze on the sod roof of its Norwegian log building. Inside, the boutique is full of Scandinavian clothing, gifts and food items like jars of wild organic Swedish lingonberries sweetened with sugar. Al’s is America’s largest importer of organic lingonberries — a red berry popularized by IKEA that is described as a cross between a cranberry and a currant. 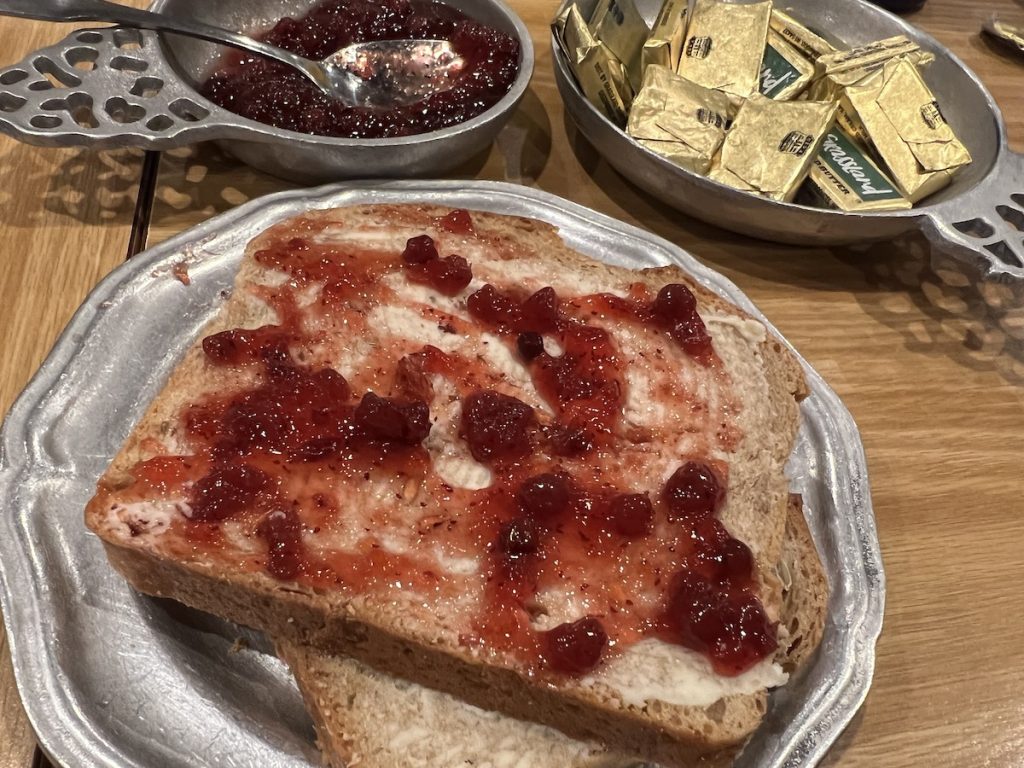 I heap lingonberries on buttered limpa bread, a light rye with anise and orange peel. And I spoon the spread onto Swedish pancakes, which taste like French crêpes but are cut in rectangles, folded and served in a pleasing stack.

“Lingonberries come family style — I bring more as we need them,” says the cheerful server, setting down silver dishes full of them all along our table. “Share the love.” 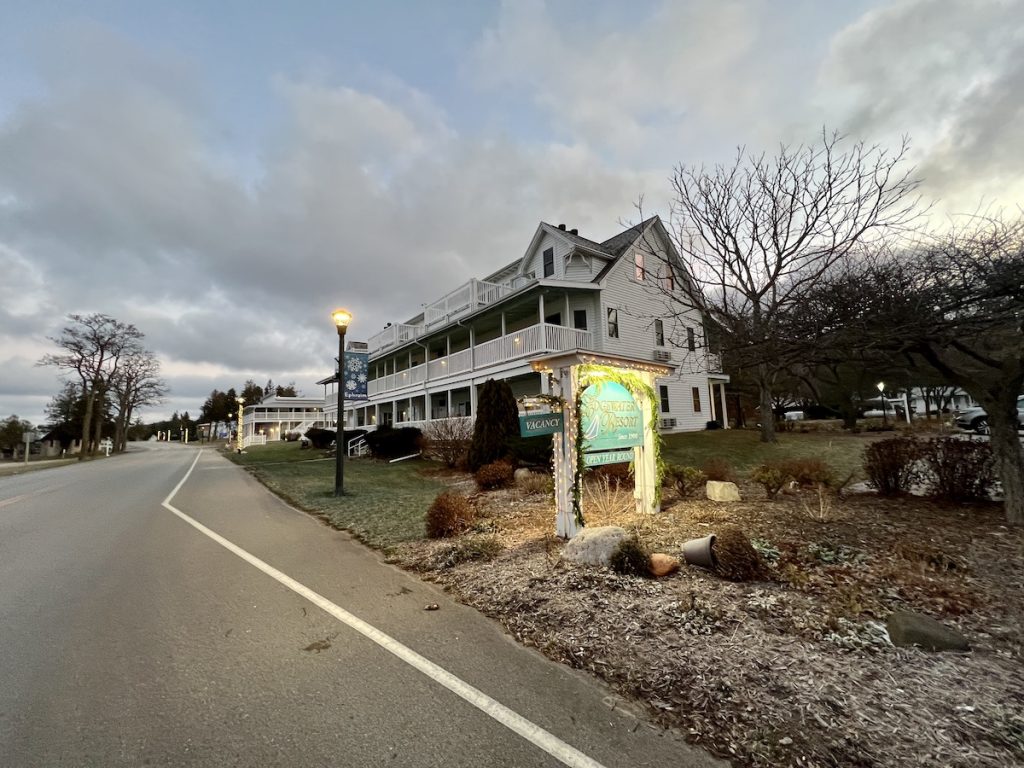 Disclosure:  The author was a guest of Destination Door County and Geiger & Associations Public Relations. 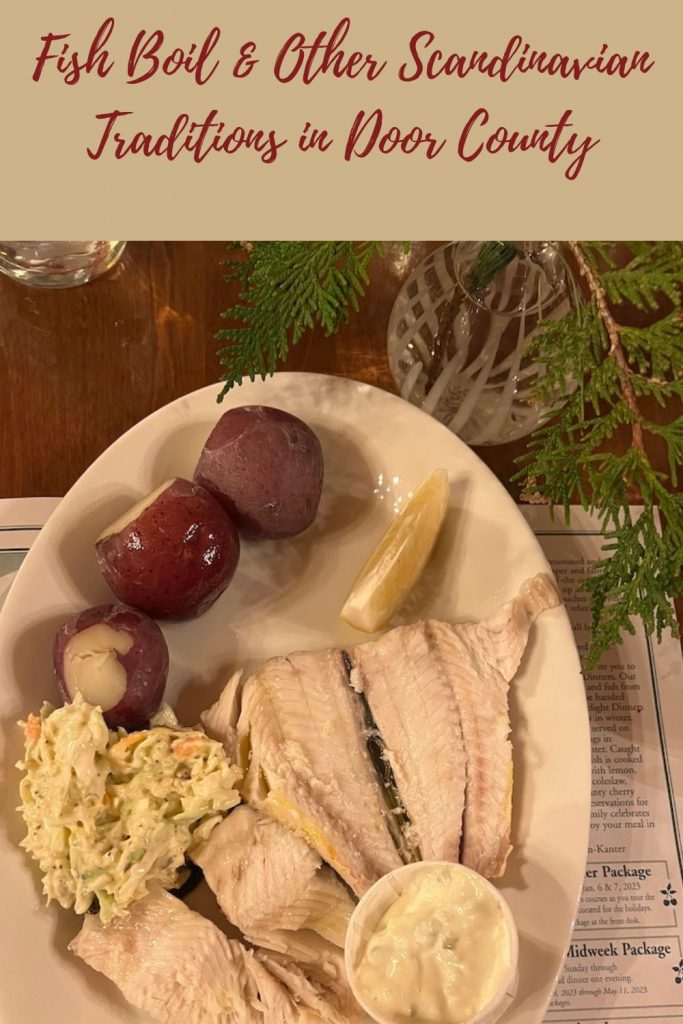