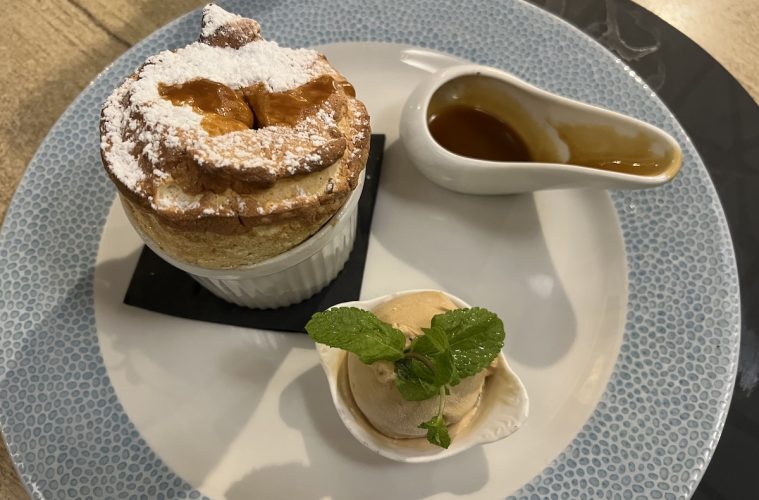 Our November week on St. Martin — sticking mostly to the French side of this dual-nation Caribbean island — was not your typical, lazy beach vacation at an all-inclusive resort. We came to eat.

This year’s festival starred plantains, the tropical starchy fruit related to the banana. Cooked when green (for a savory result) or yellow-black (for a sweet result), typically, they’re thickly sliced in rounds, fried and served alongside meals.

“Local people, if I don’t put plantain on someone’s plate, they’re not going to sit down and eat,” admitted Christine Illidge. She owns Sandy’s Creole Cuisine, located in a temporary, open-air container village in Marigot. Sandy’s is a “lolo,” slang for a casual “locally owned, locally operated” eatery. 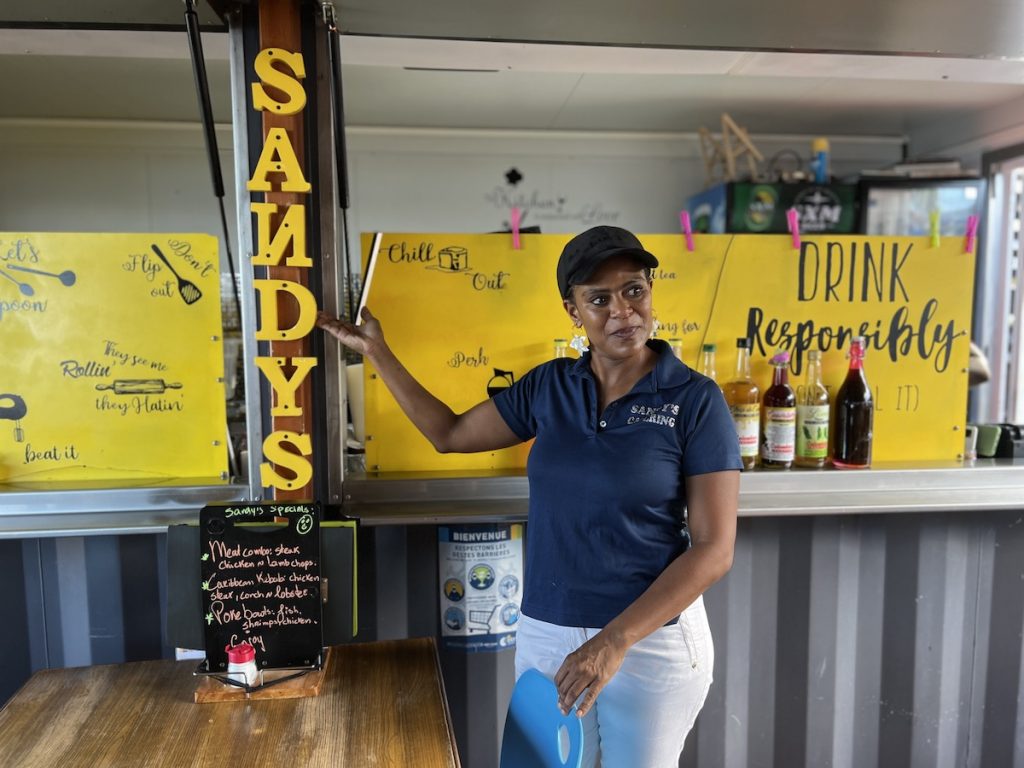 Illidge says she had to “really go and think outside of the box” for the gastronomy festival. And so she concocted recipes for plantain soup, ceviche, samosas, gratin, cheesecake and more.

The ceviche and samosas were popular enough to potentially earn spots on her regular menu. But if you wind up at Sandy’s and don’t see special plantain dishes, order the tropical fruit-filled crêpes. St. Martin is an overseas collectivity of France, after all.

St. Martin: Dining on The French Side 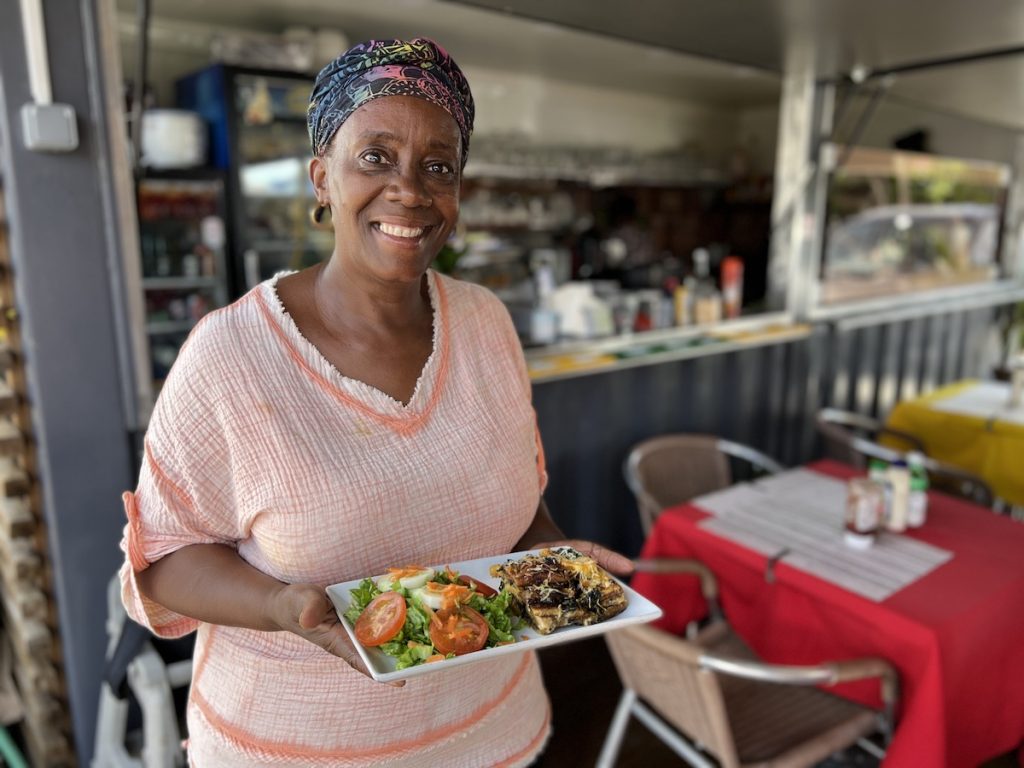 We spent a ridiculous amount of time eating in Marigot, the main town and capital on the French side.

Cisca’s Delicacy is another fun lolo. L’Express makes buttery and flaky croissants, and La Terrasse Rooftop Restaurant in Le West Indies shopping mall is known for its view, but it was honestly too hot to sit outside. The food was flawless, however.

Marigot is also home to Exodus Juice Bar, which won me over with banana shakes made with hemp milk and two secret ingredients — oats and peanuts. 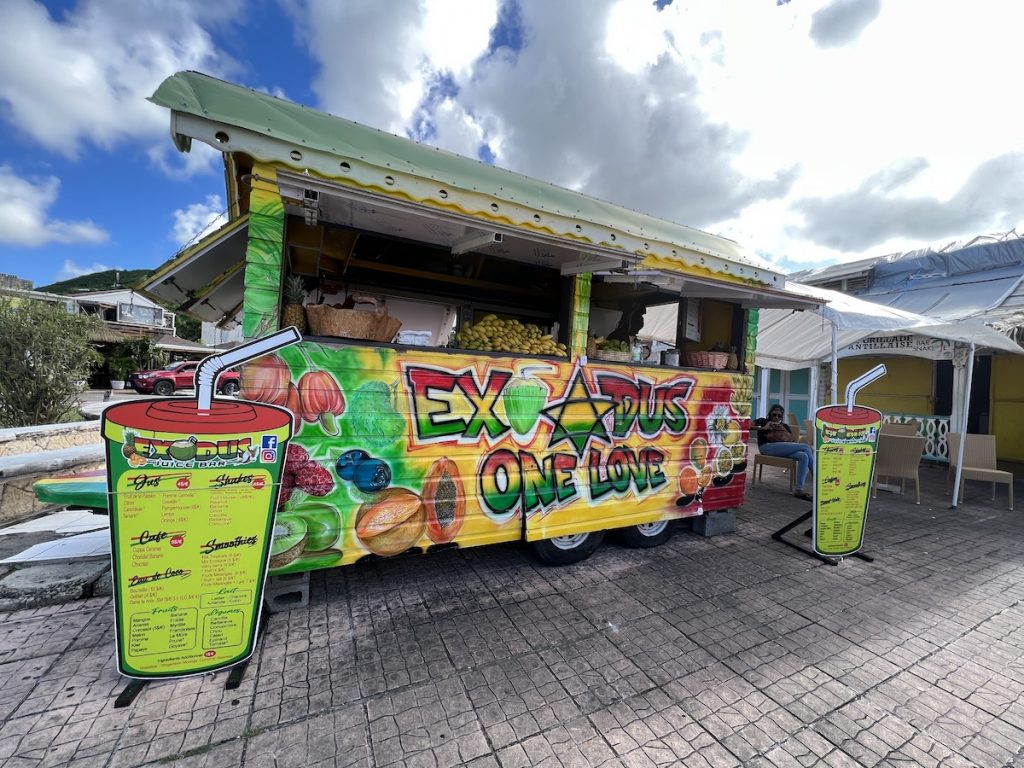 Off the main Marigot strip is Guavaberry Colombier Tradition, where the island’s signature liqueur is sold. The Maccow family has a farm nearby to grow the indigenous tree. And it has a distillery to transform the multi-colored berries into a spirit that can be fruity, spicy, bitter and sweet all at once. The cute standalone shop doubles as a tasting room. 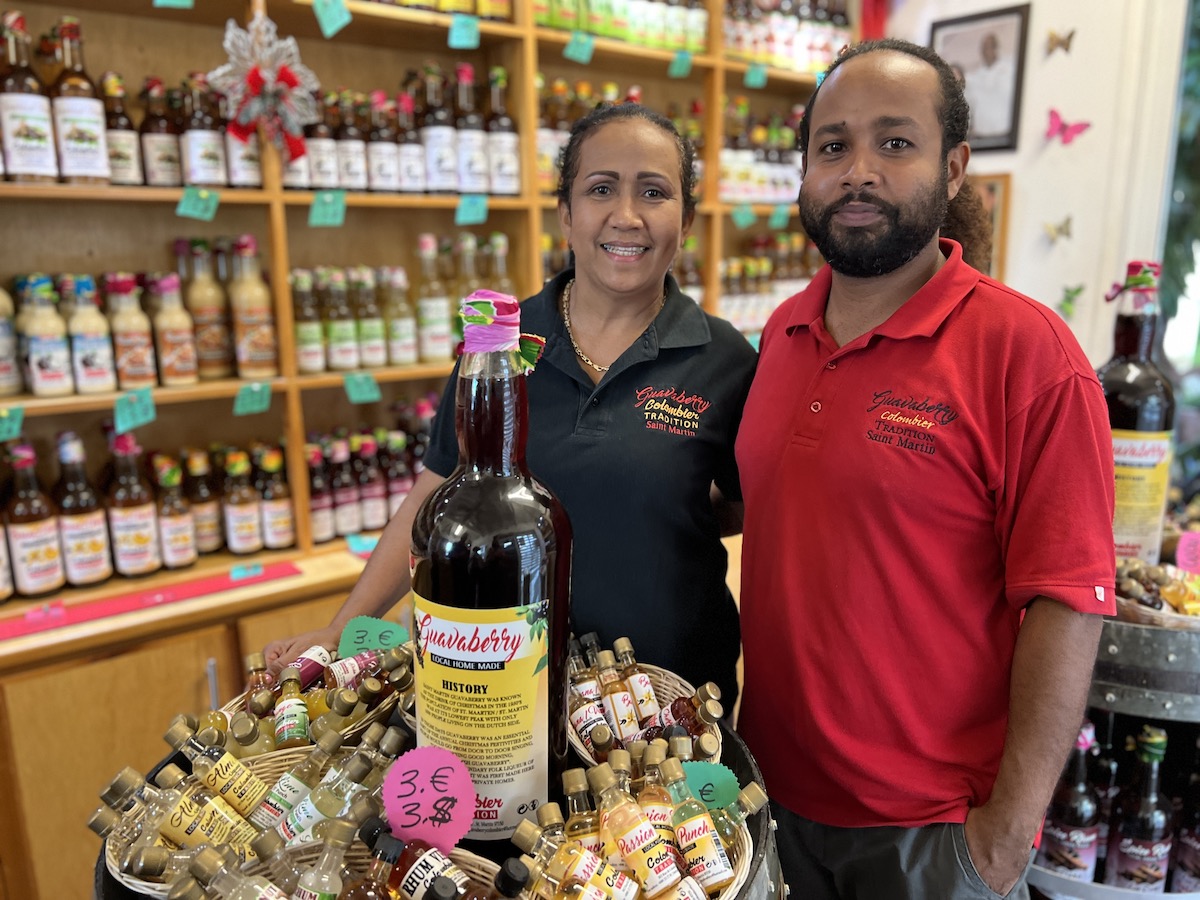 Be warned that driving in Marigot isn’t for the faint of heart. We braved winding, jammed roads to dinners at BZH in Oyster Pond for duck breast with foie gras, Le Cottage in Grand Case for caramel soufflé, and La Cigale in Baie Nettlé for foie gras emulsion soup.

We went on a shopping spree at the enormous Super U grocery store in Hope Estate and put together an impressive charcuterie and cheese spread.

Lunch at Le String Beach in Orient Bay was memorable, partly because it cooked me a perfect medium-rare steak. But mostly, it was because it paired mashed, spiced plantain with cod for the Festival de la Gastronomie Saint-Martin. (No surprise to see String Beach named Best Table of Saint-Martin 2022/2023.) 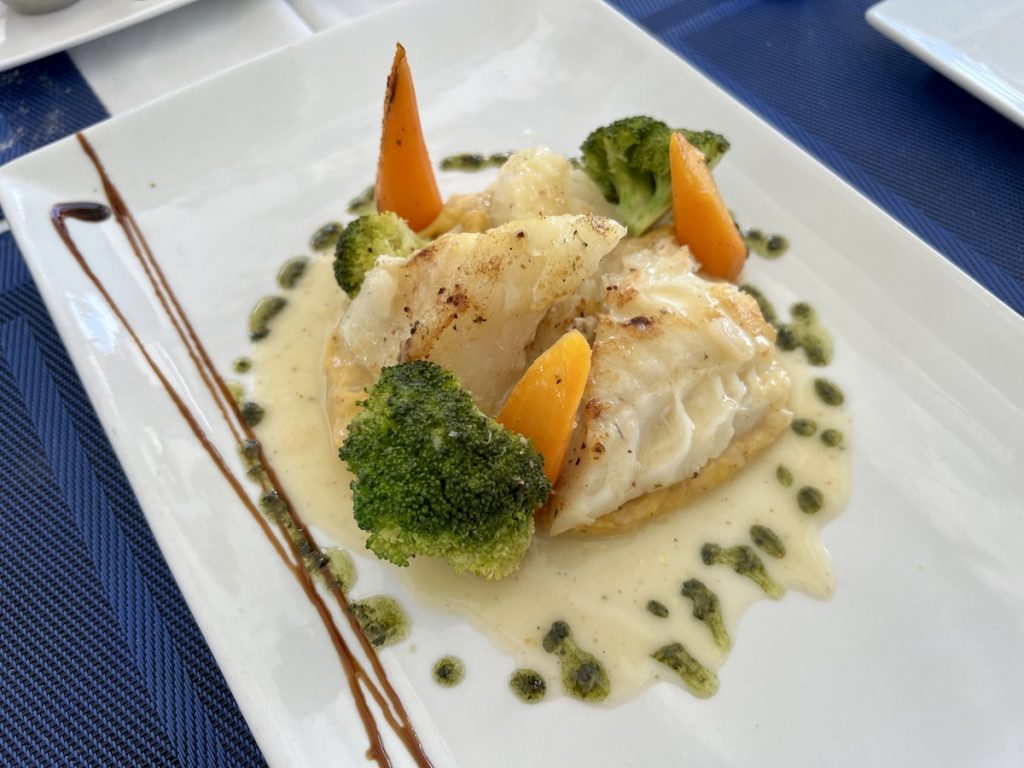 Fort Louis towers over Marigot and is a short, steep climb from town. It was built in 1789 to defend against British and Dutch pirates and keep them from harbor warehouses full of rum, salt, coffee and sugarcane. Now, photogenic but invasive green iguanas have the run of the place. 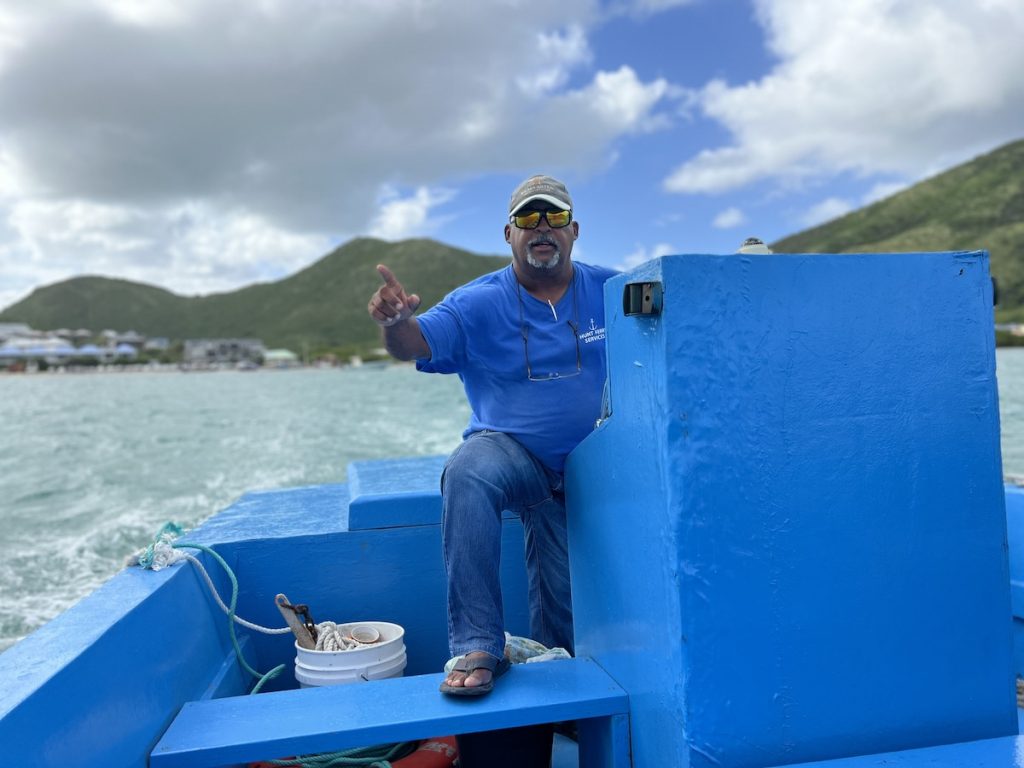 After that lunch at String Beach, we took a quick public boat ride to Pinel Island under stormy skies. Charismatic captain Mike Hunt teased us about getting a “saltwater bath with freshwater rinse, all for the same price.”

Small, uninhabited Pinel is protected by the St. Martin Nature Reserve. But two beach bars have permits to operate. And there are a few hiking trails. It’s a busy spot, but one I’ll remember as the place I came face-to-face with two red-footed tortoises.

Going to Pinel was a spontaneous decision, but we also booked a guided tour with a company that crafts custom art, history, nature, birding, culinary and architecture itineraries. And it drives small groups around by van.

Seagrape Tours matched us with Rikke Bachmann Speetjens for a nature tour. She introduced us to cacti-dotted Babit Point, took us birding at Étang de la Baie Lucas, and showed us around Amuseum Naturalis, a free, self-guided nature and heritage museum in Quartier d’Orléans. Then Speetjens drove us up the rather treacherous Rue du Pic Paradis, parked at the end of the road and led us on a short, gentle hike to Pic Paradis, the highest point in St. Martin. 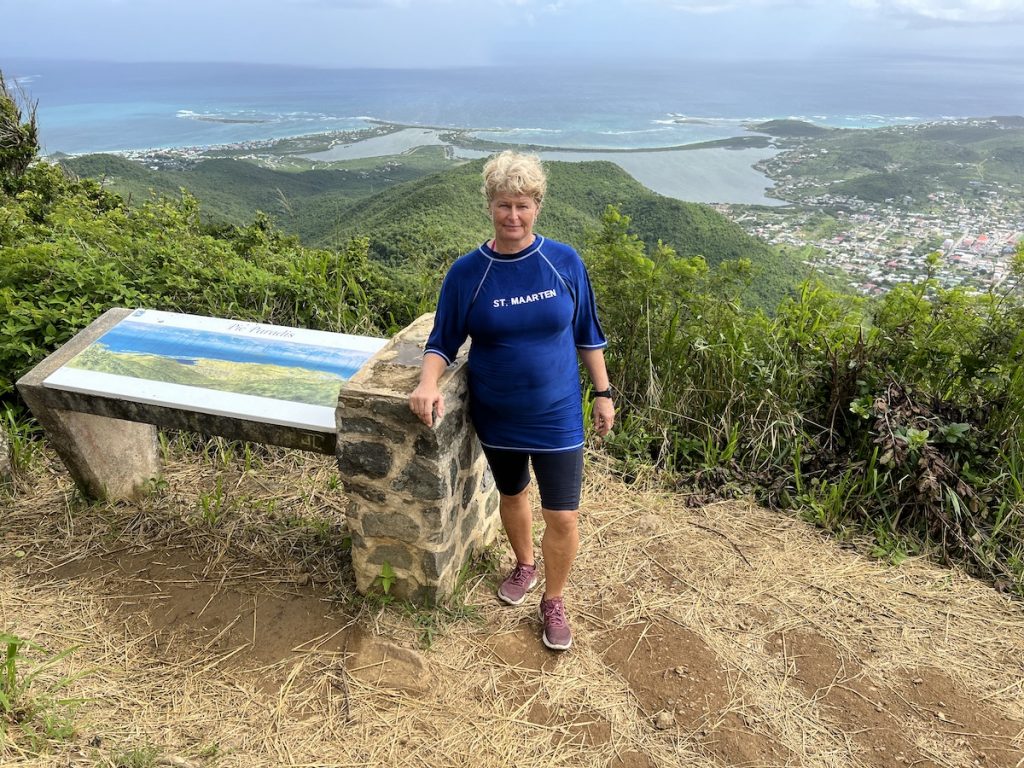 From an elevation of 1,391 feet, we admired the island from two viewpoints. Then we trekked back to the van for a surprise picnic featuring a slice of Seagrape’s signature banana bread and a mug of iced lemongrass tea. 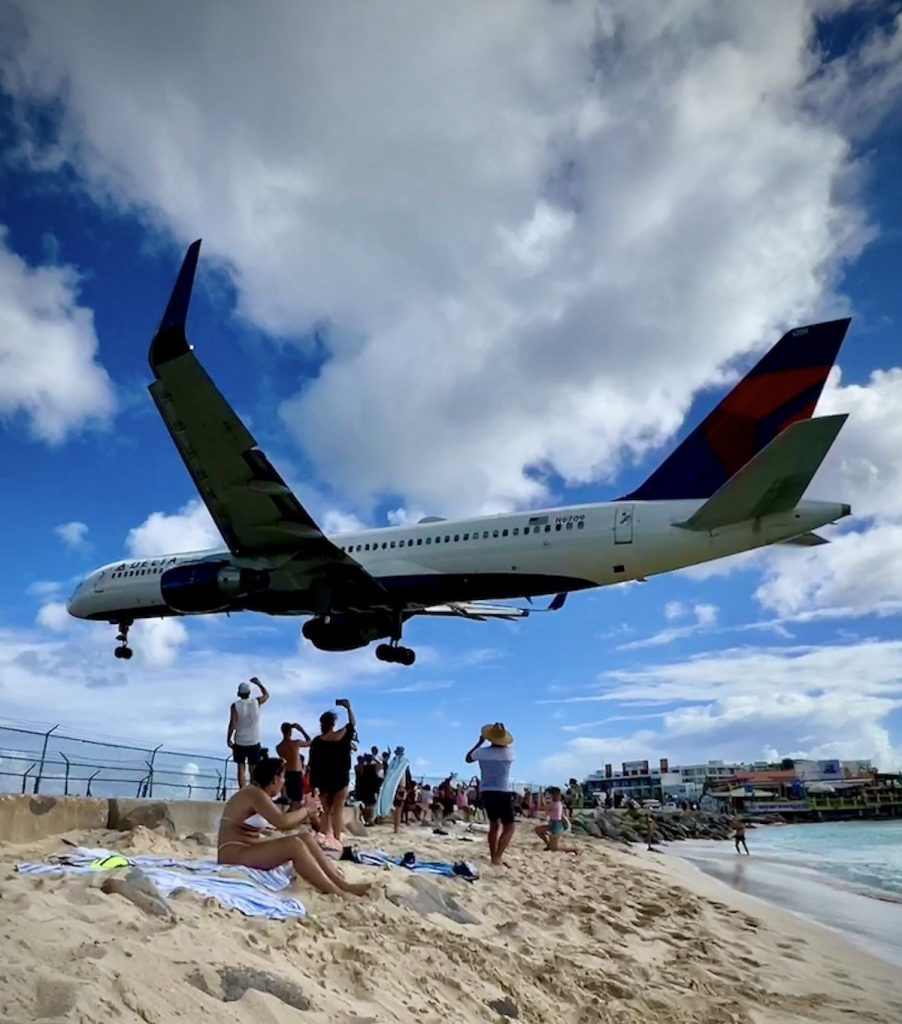 We were wrapping up a lazy day on a private charter with Pyratz Gourmet Sailing aboard luxury catamaran Galaxy when a jet roared overhead en route to Princess Juliana International Airport. I should have just savored the moment instead of pulling out my camera.

In vain, I tried to capture something that seemed to happen in slow motion but was actually over in seconds. Besides, I already had plenty of good shots from standing on Maho Beach for an hour or so with throngs of fellow visitors and watching — make that feeling — plane after plane land.

Warning signs are posted along the fence separating the runway from a narrow strip of beach and a road. “Jet blast of departing and arriving aircraft can cause severe physical harm resulting in extreme bodily harm and/or death.”

Planespotting can be occasionally lethal, especially if you recklessly stand by the fence and get knocked off your feet. So almost everybody gathers on the beach.

The winds were unfortunately high that day — too high for captain Garin Jordaan to make it to uninhabited Tintamarre Island to see the ruins of a so-called “king’s” estate and traces of an ill-fated airline company. But they weren’t too high to answer an emergency call about a windsurfer that appeared to be in distress (he wasn’t).

When that final jet unexpectedly flew over our catamaran, our muscles ached from swimming in the Caribbean Sea’s turquoise water and our bellies were full of lobster and grilled pineapple.

Food really does seem to run through everything on St. Martin.

Disclosure: The author visited as a guest of Jesson + Co. Communications and the St. Martin Tourist Office. 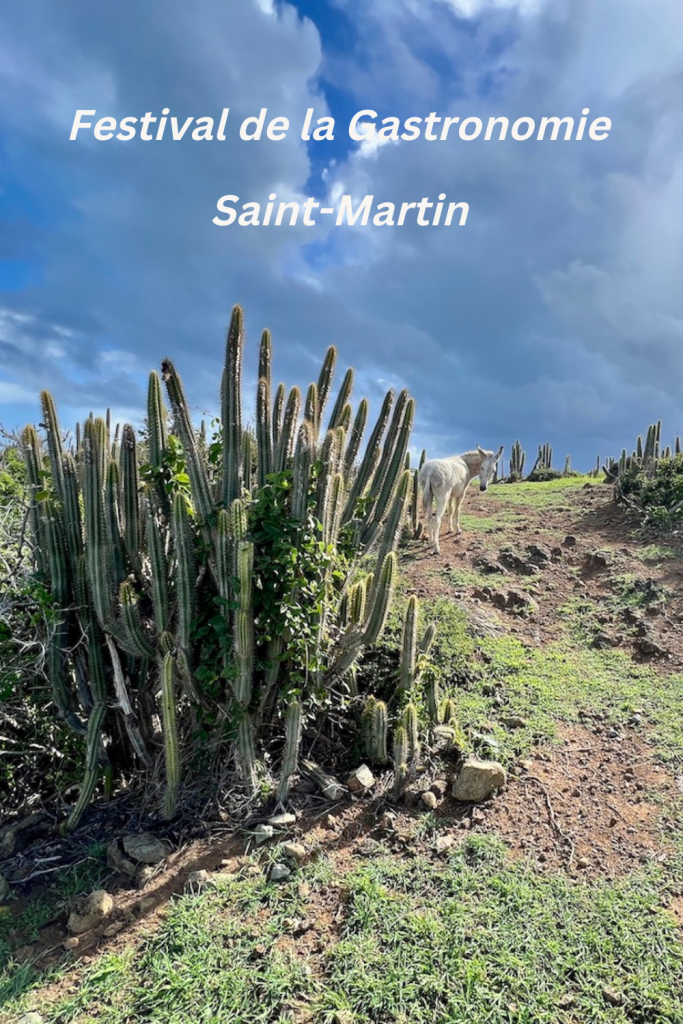