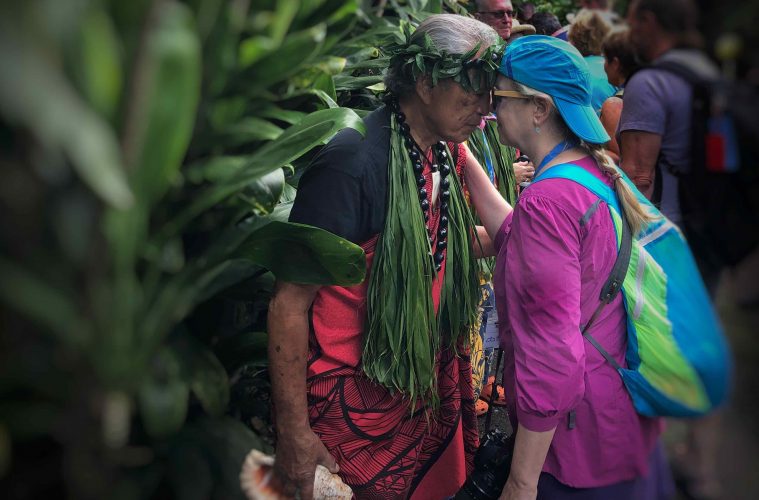 Say Hello to Hawaii and the Magic of Molokai

As the island came into view, all I could see in the distance was swaths of sustainable shades of green. Verdant, flourishing, and lush, it went on for miles and was unlike what I was expecting. Unpaved roads the color of the Grand Canyon made their way thru the landscape and created a dramatic contrast to the undergrowth. There was no highway, no high-rises, as a matter of fact, the only high nearby was the one I was beginning to feel as the landing gear dropped and the small plane made its way down onto the runway and the magic of Molokai.

Hoolehua Airport itself was wrapped in a time warp; a small bunker-like structure, many of the walls open to the humid breeze blowing thru, housed both the arrival and departure gates. Luggage was collected from the rolling racks outside. After an incredibly long day of travel, my husband and I were finally on our way to the Molokai Hotel for the night.

In 24 hours, we would board the Safari Explorer, a 36-guest ship that would be our home as we discovered the Hawaiian Islands on an expedition cruise to Molokai with UnCruise Adventures.

I have always had mixed feelings about visiting Hawaii. In my mind’s eye, it seemed to vacillate between a tropical bliss of fierce volcanoes and a sea of luxury high-rises that threatened the future of paradise. With the opportunity to see Hawaii from the water, my husband’s and my favorite way to travel together, it appeared the timing was right. Little did I know just how deeply into the heart of Hawaii we would be able to reach with UnCruise. Let the journey begin.

The Magic of Molokai 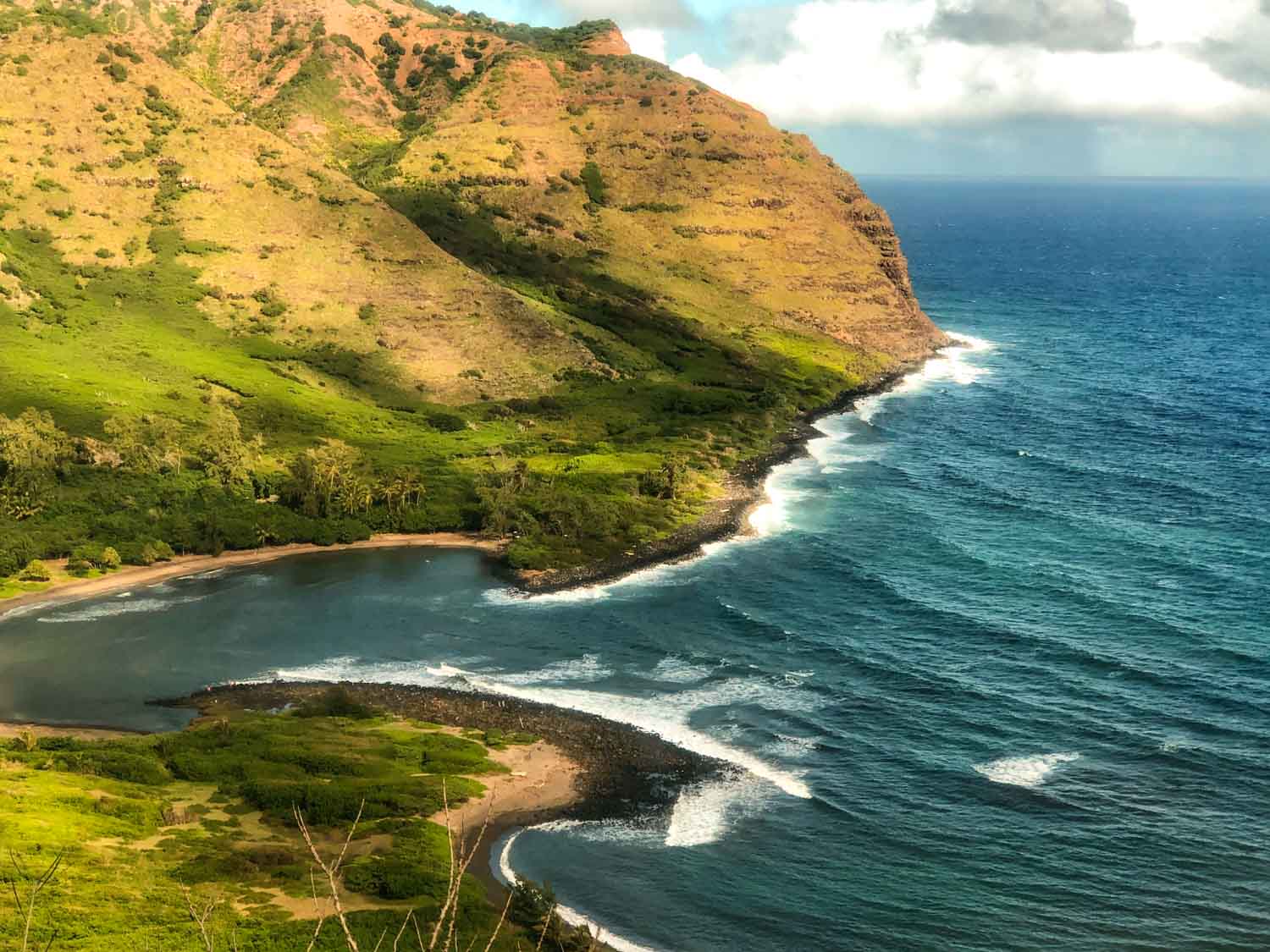 Molokai might only be a 15-minute flight from Honolulu; in reality, it is a world away. When friends asked, “What islands will you be visiting?” most had never heard of Molokai. Not one had been there. Kalaupapa, the former leper colony on a peninsula along the northern coastline, might be its most well-known feature. There, Father Damian brought hope and compassion to a terrible time in Hawaii’s history.

We were headed further east to the lush Halawa Valley on the end of the island. Ancient Polynesians may have settled here as early as 650AD. The fertile valley has a secluded beach and the towering 250-foot Mo’oulu Falls. The landscape is only part of the magic of Molokai, as it was in this valley that we learned about balancing survival and preserving indigenous culture.

Moloka’i is like stepping back in time to the Hawaii of yesteryear.

“Moloka’i is like stepping back in time to the Hawaii of yesteryear,” UnCruise CEO Dan Blanchard said in a statement accompanying the announcement that UnCruise would be permitted to dock and visit Molokai. “It’s incredibly scenic and values its culture and heritage, which we’re proud to be able to share with our guests.”

Experience adventure and culture with UnCruise 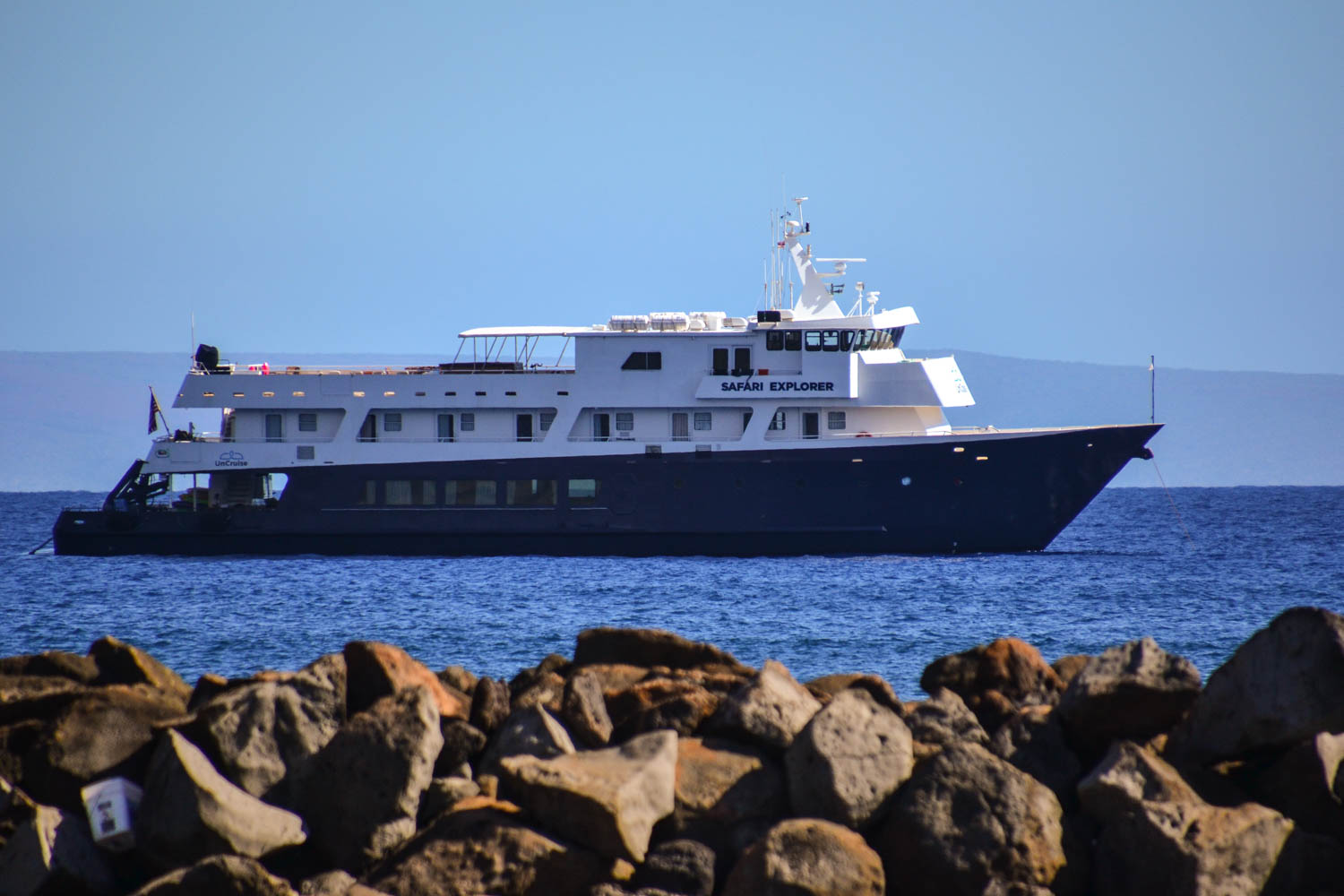 Transformative travel, one of the principle tenets of UnCruise Adventures, is all about being exposed to concepts and cultures that might be unfamiliar from your own. By going deeper during the process, your understanding of the world tends to change. In Molokai, we would be seeing the landscape through the eyes of a family hanging on to their legacy.

As the last living Hawaiian descendant born and raised in the valley and still living there, Uncle Pilipo takes the role of carrying on traditions and cultural practices seriously.

Preserving cultures is at the core of indigenous tourism. As we entered the lush tropical environment of the Halawa Valley and its spectacular views, the Pilipo Solotorio family welcomed us: Patriarch Anakala and his son Greg were our hosts. As the last living Hawaiian descendant born and raised in the valley and still living there, Uncle Pilipo (as Anakala is fondly called) takes the role of carrying on traditions and cultural practices seriously.

Traditional protocols with a living legend 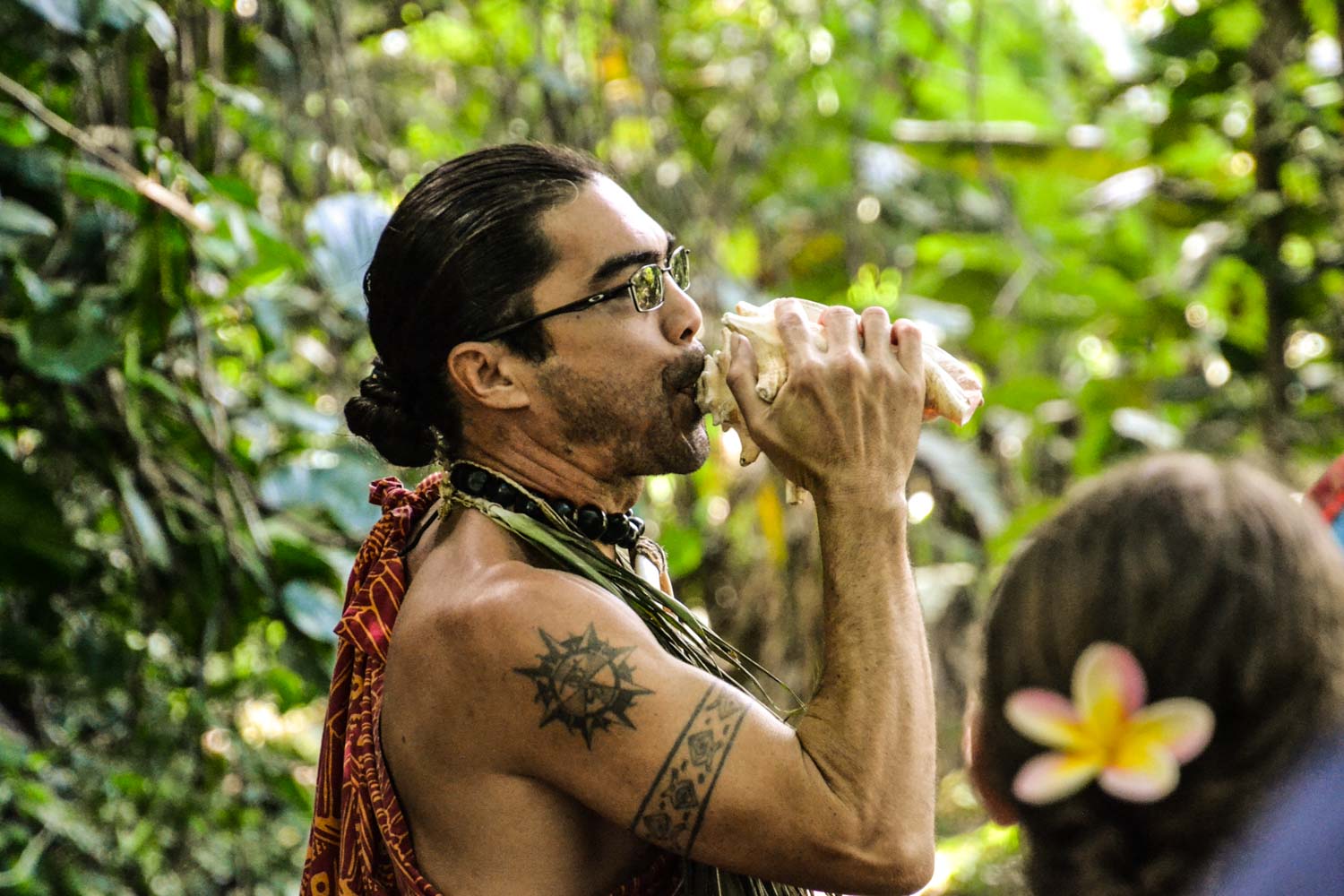 The visit began with traditional Hawaiian protocol. Deep and melancholy, the conch shell’s call echoes through the whispering palms. We wait for a response, just as visitors did hundreds of years ago before setting foot on the island. The call tells residents someone is approaching; if they are not welcome, there is no return response. Luckily, Greg’s father returns the sound and we enter the property.

…breath is the key to good health and spiritual power.

Next, we moved to greet Uncle personally and are invited into his space with the exchange of breath or Ha. Two people press their noses together while inhaling at the same time. It’s a Hawaiian greeting sacred to their culture, as it is believed breath is the key to good health and spiritual power. 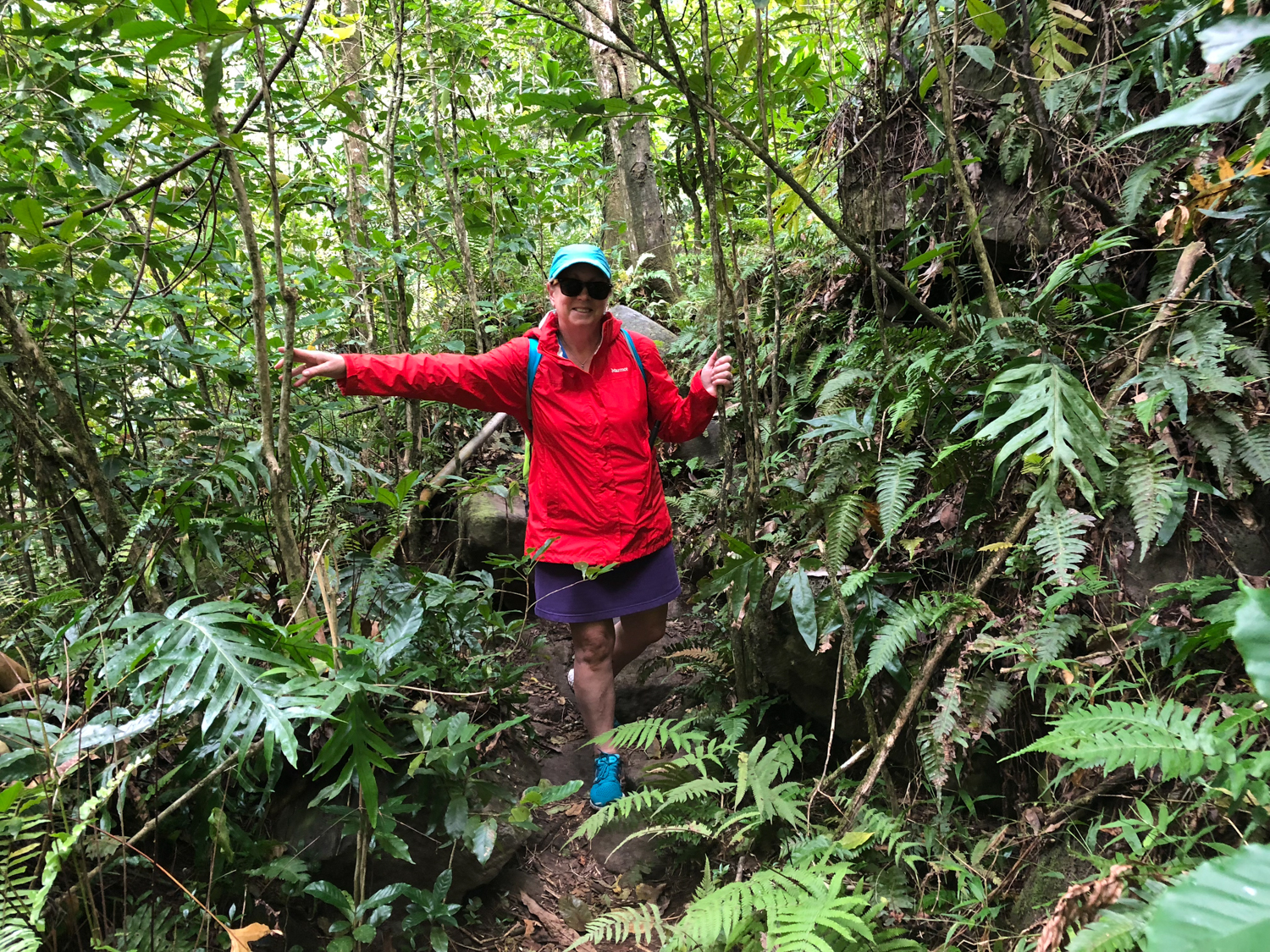 Legends surround the area and the Mo’oula Falls is no exception. After a short hike (3 or 4 miles round-trip) through the cathedral valley and several different climate zones, we reached the towering falls. The giant lizard, Moo, is said to live deep in the water. Before entering, permission must be again granted. Drop a leaf into the pool, if it floats, dive in and enjoy. If not, it’s best to steer clear of the chilled pool, no matter how inviting it might be. 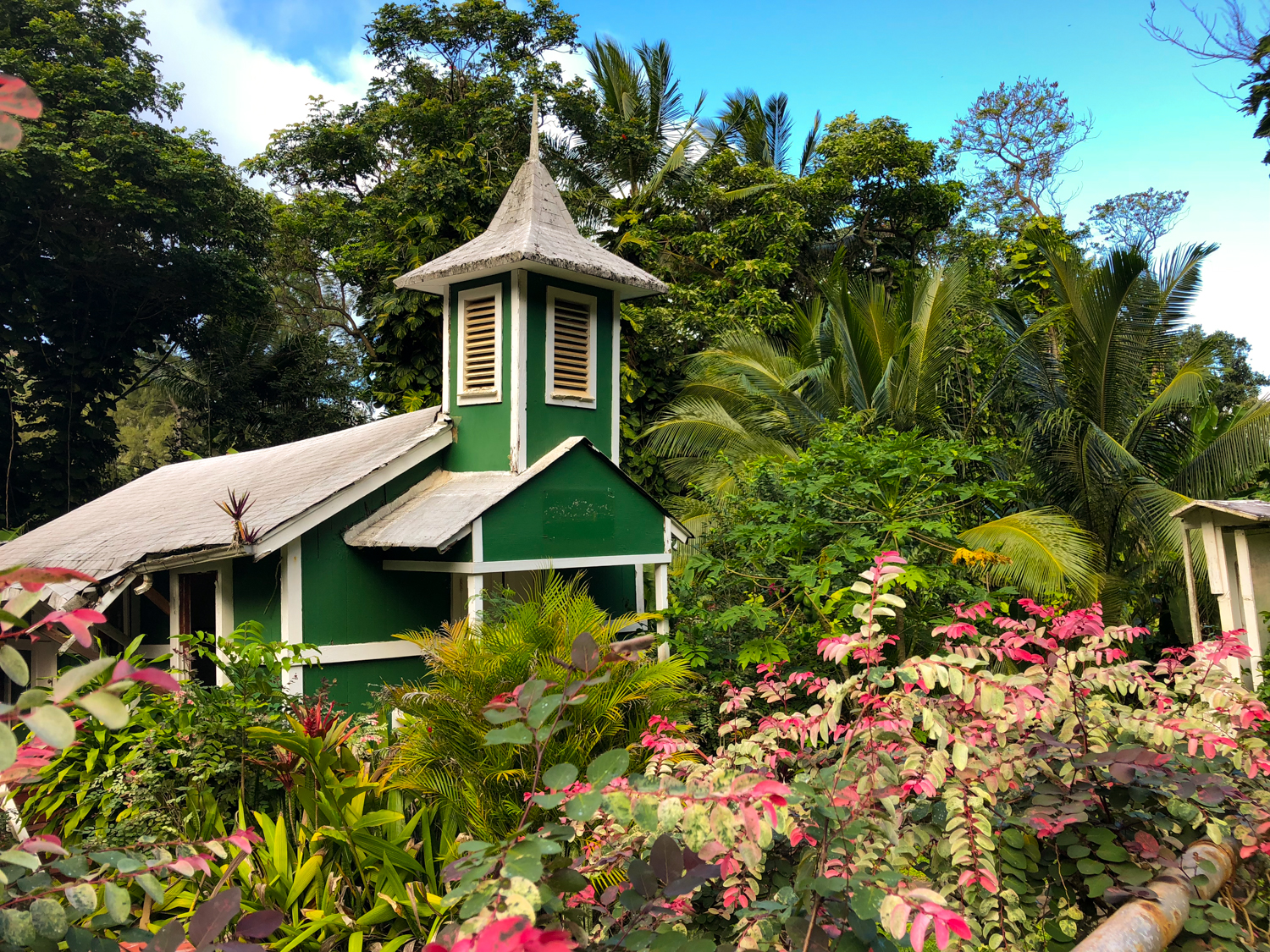 The value of the land is sacred and we left with a different understanding of indigenous culture. No matter how short our immersion, seeing the magic of Molokai could not have been a better introduction to the Hawaii we were hoping to have the chance to witness.What Hawaii looks like today depends largely on which island you visit. Each is unique, with its own identity and layers. The magic of Molokai is a far cry from the Hawaii most people think they know. While throughout the archipelago, an embarrassment of natural beauty awaits, on this island, the spirit of Aloha has a deeper meaning and speaks to the authentic spirit of the residents. 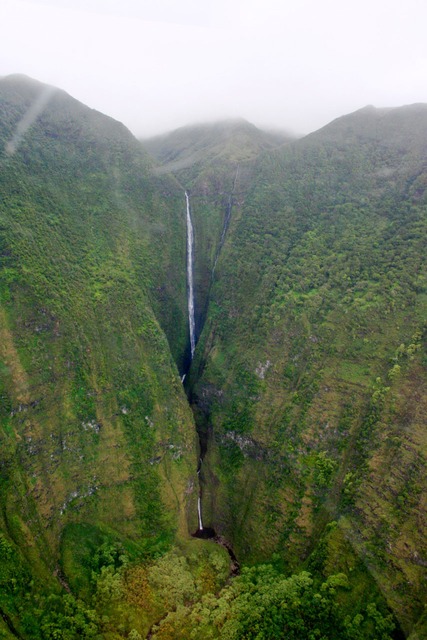 Mo’oula Falls drops 250 feet into an inviting pool, but visitors must ask permission from a giant lizard before diving into the cool waters

Disclosure: As is common in the travel industry, the author’s fare was subsidized for the purpose of review.