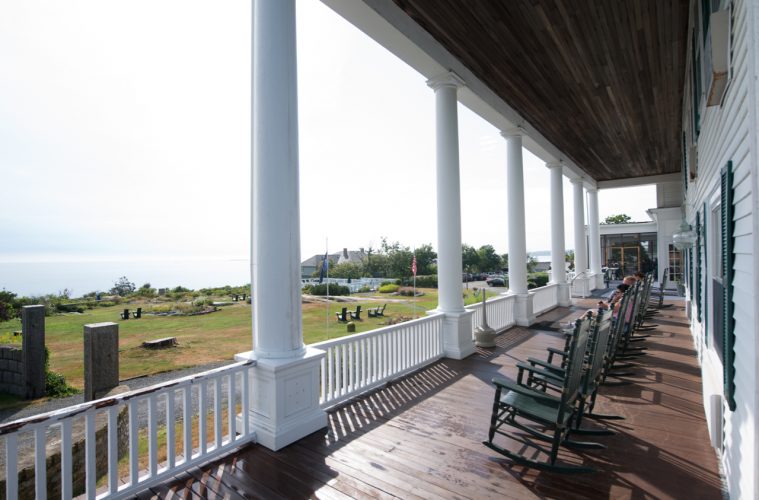 Slip away to a traditional New England seaside inn: Historic Emerson Inn by the Sea

Comfortably settled into an Adirondack-style chair, book open and forgotten on my lap, I gazed out over the lawn to a rock-girdled shoreline, watching distant boats to and fro, while listening to a symphony of gulls crying and waves lapping. From this position, it was easy to understand how this traditional New England seaside inn seduced poet Ralph Waldo Emerson. More than 150 years later, the Emerson Inn by the Sea, in Rockport, Massachusetts, retains its allure.

The inn’s front lawn is peppered with lawn games and Adirondack-style chairs as well as an outdoor heated pool. (Credit: Hilary Nangle)

Rockport is sited on Cape Ann, the easternmost point along the Essex Coastal Scenic Byway, which noodles through the Essex National Heritage Area. The 90-mile route hugs the northern Massachusetts shoreline from just north of Boston, loops around Cape Ann, and plays hide-and-seek with the coast until its northern terminus just shy of the New Hampshire border.

Driving the byway is a journey into early American History and culture, from Salem’s witchcraft trials in the late 1700s, through the heyday of American shipbuilding and trade, to the Industrial Revolution. In Rockport, one can experience the rise of rusticators and vacationers and the creation of one of America’s famed and most enduring arts colonies. The Emerson Inn puts it all within easy reach.

Or you could do as I did, and simply settle in and savor the experience. 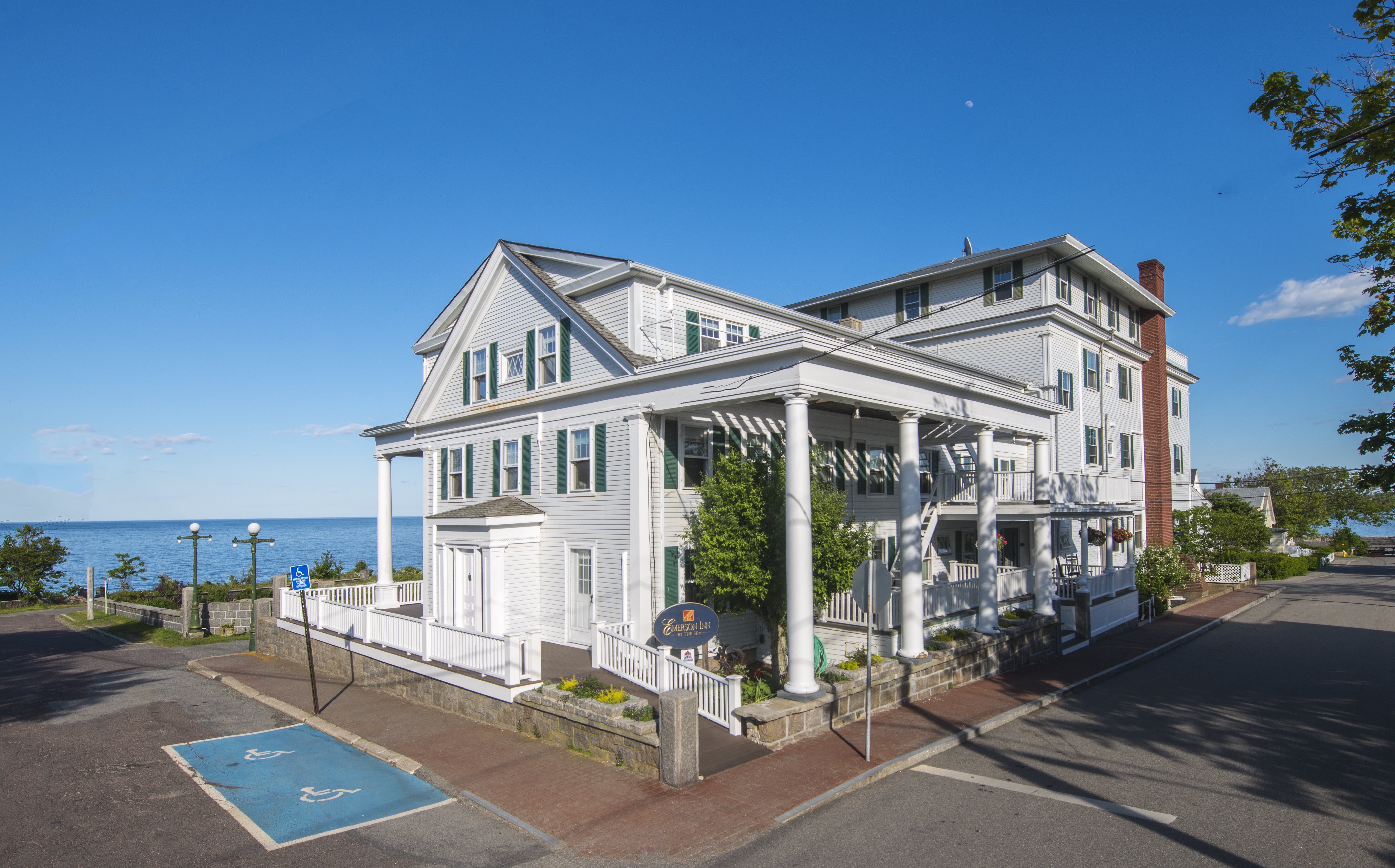 The Emerson Inn by the Sea traces its history to William Norwood’s tavern, Pigeon Cove. When abolitionists put an end to serving alcohol in 1856, Norwood began letting rooms to early rusticators. Ralph Waldo Emerson allegedly first came to Rockport with his friend Henry David Thoreau, stopping at Pigeon Cove for afternoon tea. Smitten by the scenery, Emerson returned summer after summer with his family.

He wasn’t the only one enchanted by Rockport’s natural beauty. As more and more city folk eager to escape and rusticate arrived, Norwood expanded his inn, turning the house into “the building of many gables.” In 1866, he sold it to Mrs. Robinson, who five years later moved the building to its present site.

After a period as a rooming house, it reopened after renovations as the Hotel Edward, one of the region’s early luxury hotels, attracting an international clientele. The posh hotel earned kudos for a number of area firsts: telephone, telegraph, gas, and electric lights. Renovations and enlargements continued. 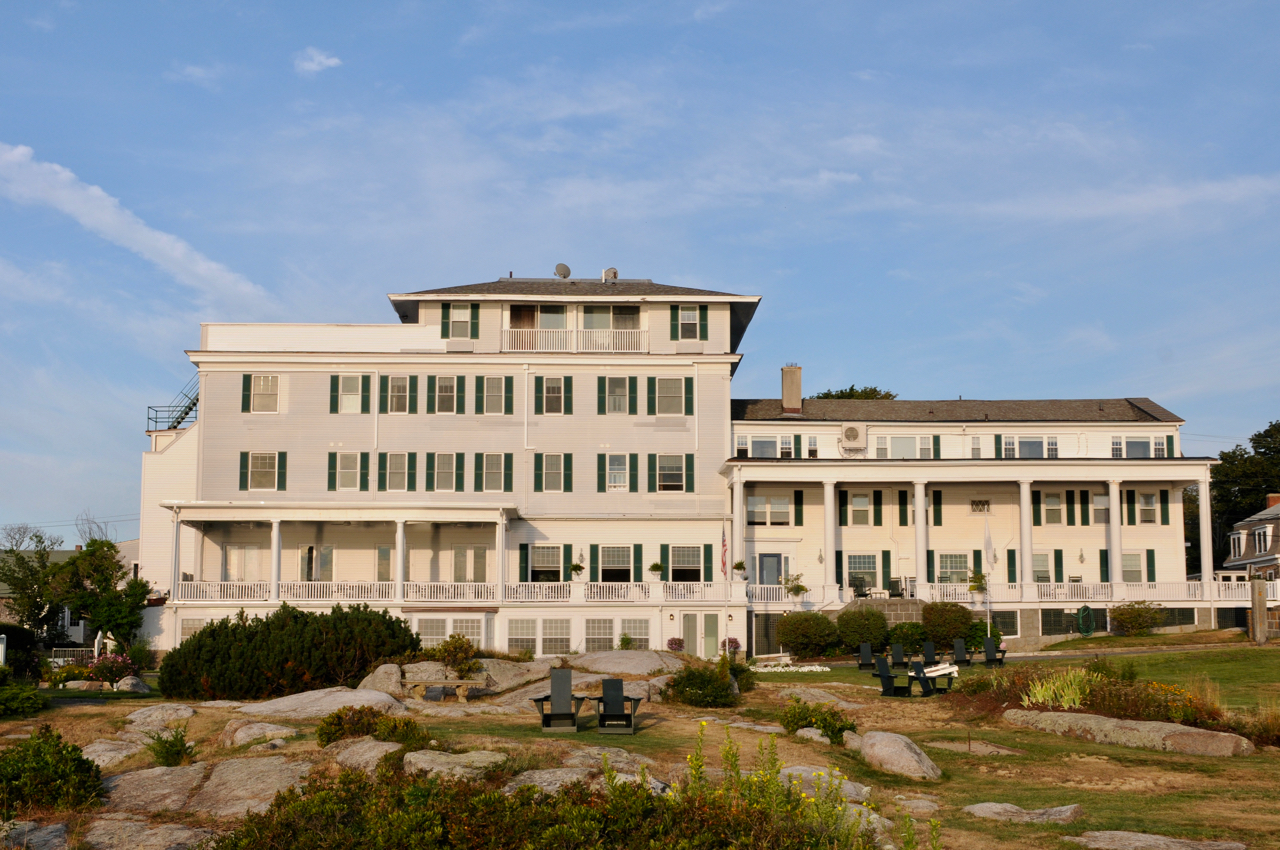 In 1964, the Wemyss family bought the inn, reopening it for the 1965 season as the Ralph Waldo Emerson Inn and furnishing it with pieces from their art and antique collections. The Coates acquired the property in 1998 and set about restoring and preserving it. In 2005, the inn received the first liquor license in Rockport since 1933, adding another to the inn’s list of firsts. The Migis Hotel Group, a Maine-based family-owned hospitality company, bought the inn in 2015 and restored the restaurant’s name to Pigeon Cove Tavern, closing the loop on its history. 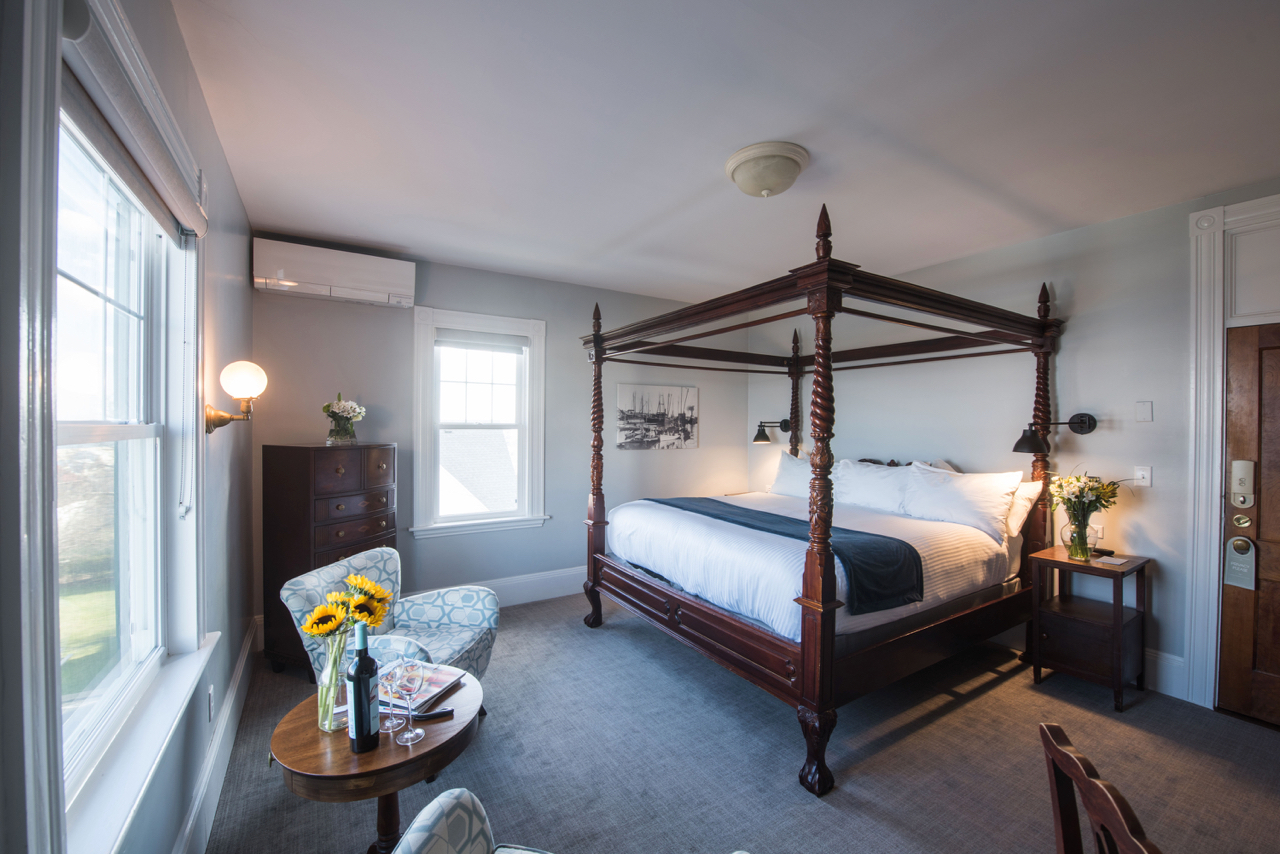 Guests in rooms on the ocean-facing side of the inn can watch the sunrise out of the Atlantic from their beds. (Credit: Emerson Inn by the Sea)

A look around the Emerson Inn by the Sea

The exterior of this traditional New England seaside inn echoes its history: It’s an architectural hodgepodge. Not ugly, but not particularly handsome, either. It might not win the beauty pageant, but it’s a shoo-in for the people’s choice award. We arrived in time for afternoon tea and cookies, which we enjoyed while completing check-in.

The inn’s heart is the first-floor parlor, a spacious bar and lounging area furnished with antiques. Both the parlor and adjacent restaurant open to a mostly covered porch rambling the full length of the inn’s ocean-facing facade. Like the Adirondack-style chairs on the lawn, the porch rockers invite sitting and rusticating. We sipped cocktails while watching other guests play lawn games and swim lazy laps in the outdoor heated pool. 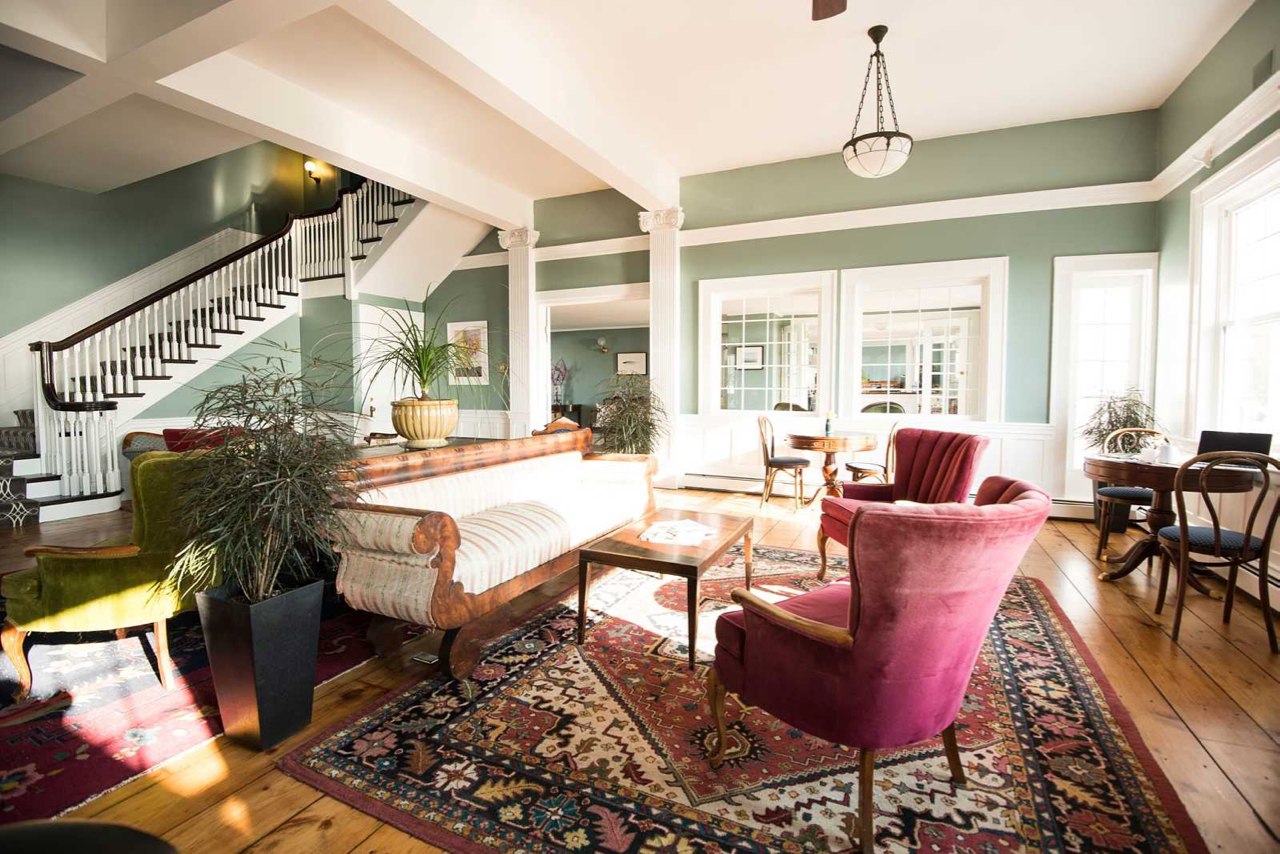 Antiques fill the Emerson Inn’s parlor, which is the heart of this traditional New England seaside inn. A bar is tucked in one corner, a grand staircase leads to guestrooms, the restaurant is adjacent, and everything overlooks the porch and out to the Atlantic. (Credit: Emerson Inn by the Sea)

A grand stairway ascends from the parlor to the guest rooms, which are spread out on the upper three floors and connected by a maze of hallways and stairways. Our Pigeon Cove-style room delivered on its promise of a stunning ocean view. The décor honored the inn’s history with a four-poster king bed and historical photos complemented by contemporary patterned armchairs, a soothing silver and blue color palette, and luxe linens. Other guestrooms range from Charming (small, quaint) to Balcony (spacious fourth-floor rooms with glass doors opening to Juliet balconies with the best views).

The restaurant serves a hot-and-cold buffet breakfast in the morning, with seating both indoors and outside on the porch. Given the weather and views, we took ours outside and did the same with dinner. The inn serves “sophisticated New England comfort food.” That translates to chowder, lobster rolls, steak frites, and the like. While I never did rise in time to catch the sun rising out of the Atlantic, I did savor the sunset’s color extravaganza. 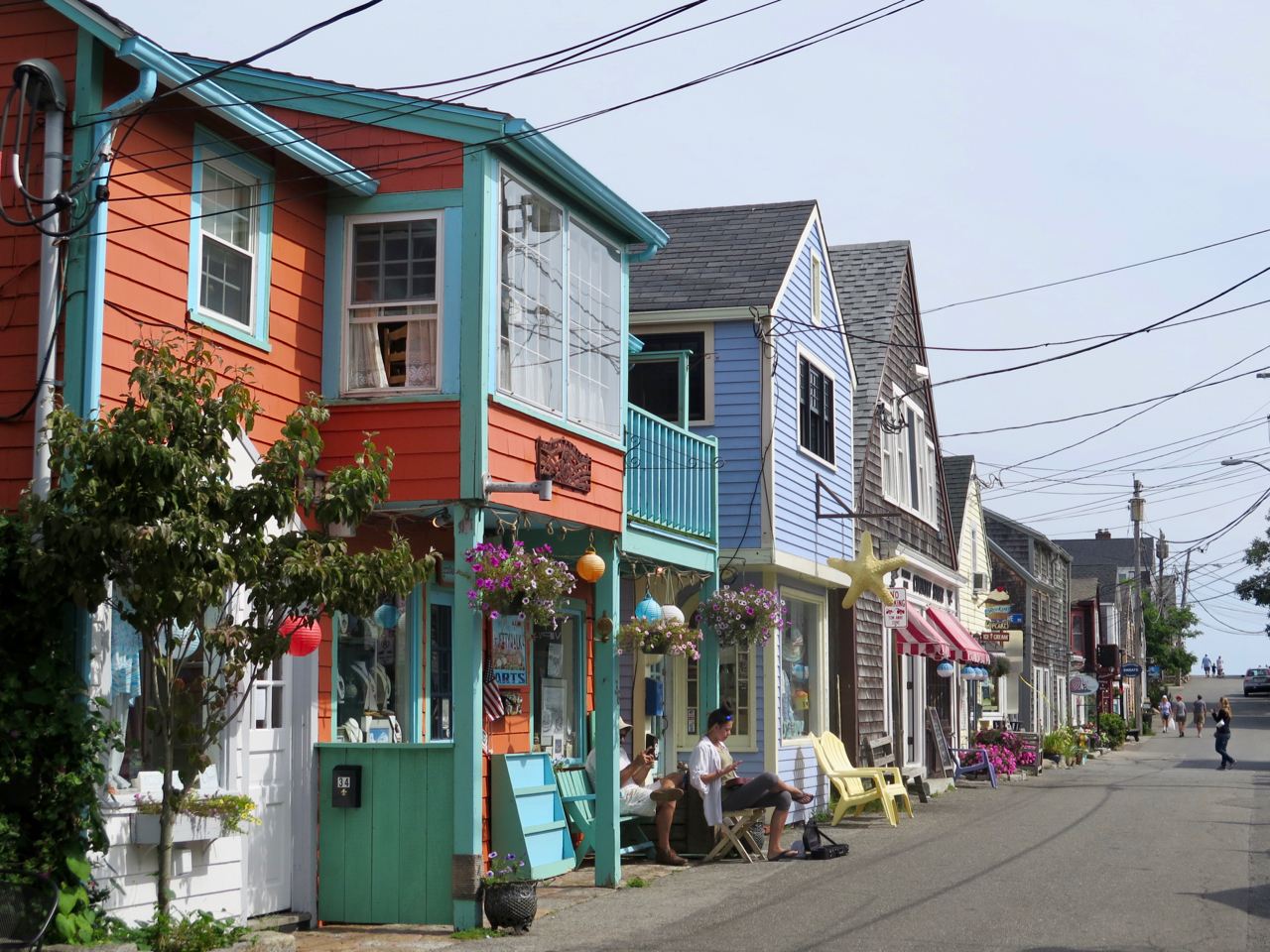 Rockport, one of America’s oldest art colonies, is a longish walk or quick drive from the Emerson Inn by the Sea. (Credit: Hilary Nangle)

While it was tempting to simply spend the day lounging at the inn, Rockport’s adorable and artsy center is only a mile or so away. Galleries, restaurants, and inviting shops fill colorful, cheek-by-jowl, shingled and clapboard buildings lining the roads, lanes, and wharves of Bearskin Neck. 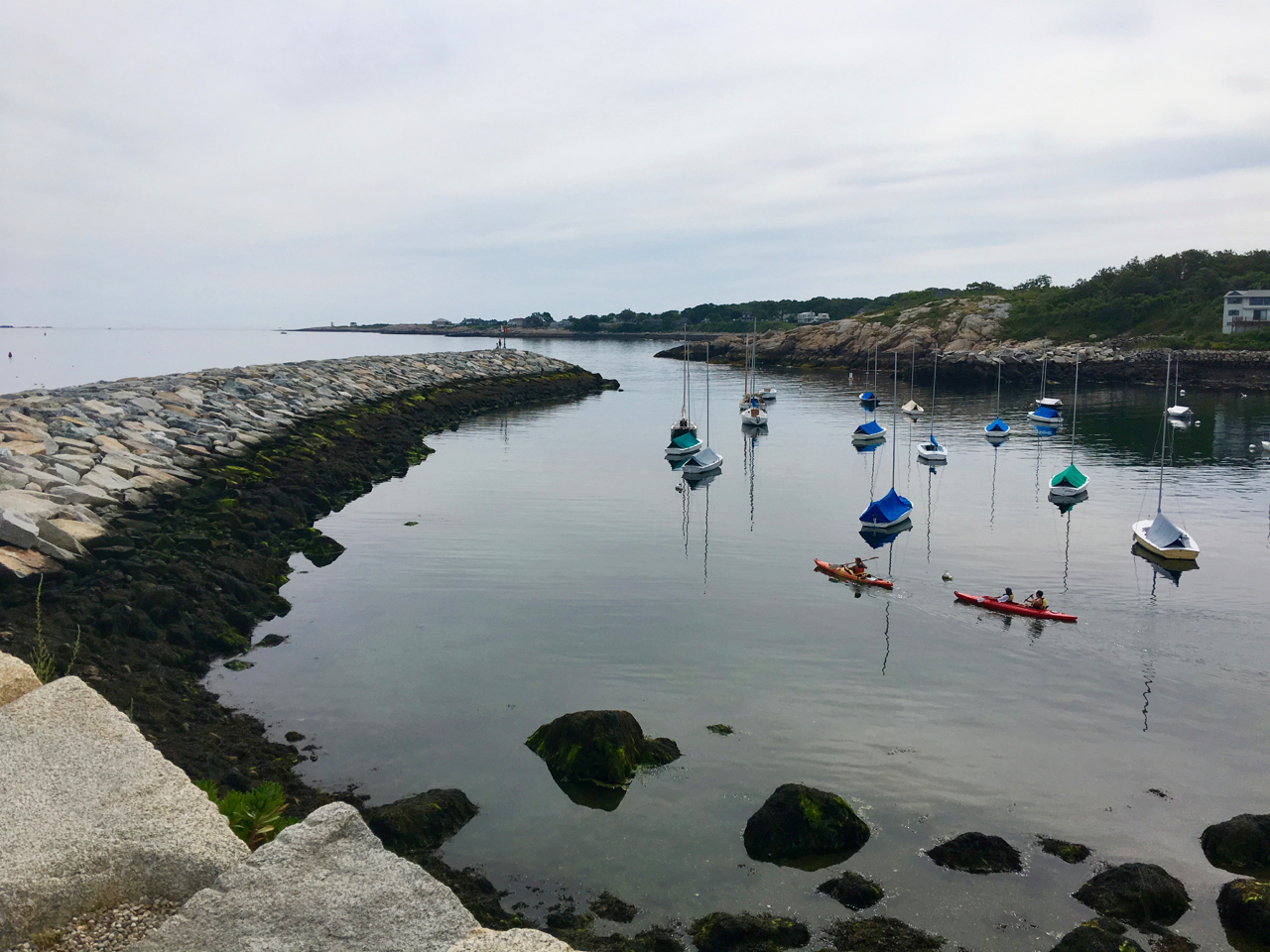 From the neck’s tip, a granite breakwater shapes and guards Rockport’s outer harbor, where pleasure craft moor. Granite wharves piled with traps wrap the inner harbor like arms, protecting commercial fishing boats and trawlers within. The iconic red fishing shack, allegedly the most photographed and painted building in the world, was dubbed Motif No. 1 by illustrator and etcher Lester Hornby when instructing pupils in Paris one winter.

The eye-candy setting makes it easy to understand why Rockport’s art colony, one of America’s oldest, endures.

The eye-candy setting makes it easy to understand why Rockport’s art colony, one of America’s oldest, endures. Dozens of galleries pepper the cultural district, which is anchored by The Rockport Art Association and Museum and the Shalin Liu performing arts center. For those who prefer more active pursuits, fishing and whale-watching excursions depart from the waterfront, where one can also rent kayaks for a more intimate experience with the sea.

Head north from the inn and arrive at Halibut Point State Park, the northeastern tip of Cape Ann, with views northward over Crane Beach in Ipswich to Mount Agamenticus in Maine and out to the Isle of Shoals off New Hampshire’s coast. The state park abuts Sea Rocks, a town park. Walking and hiking trails, including a self-guided one focused on the historical Babson Farm Quarry, lace the landscape. 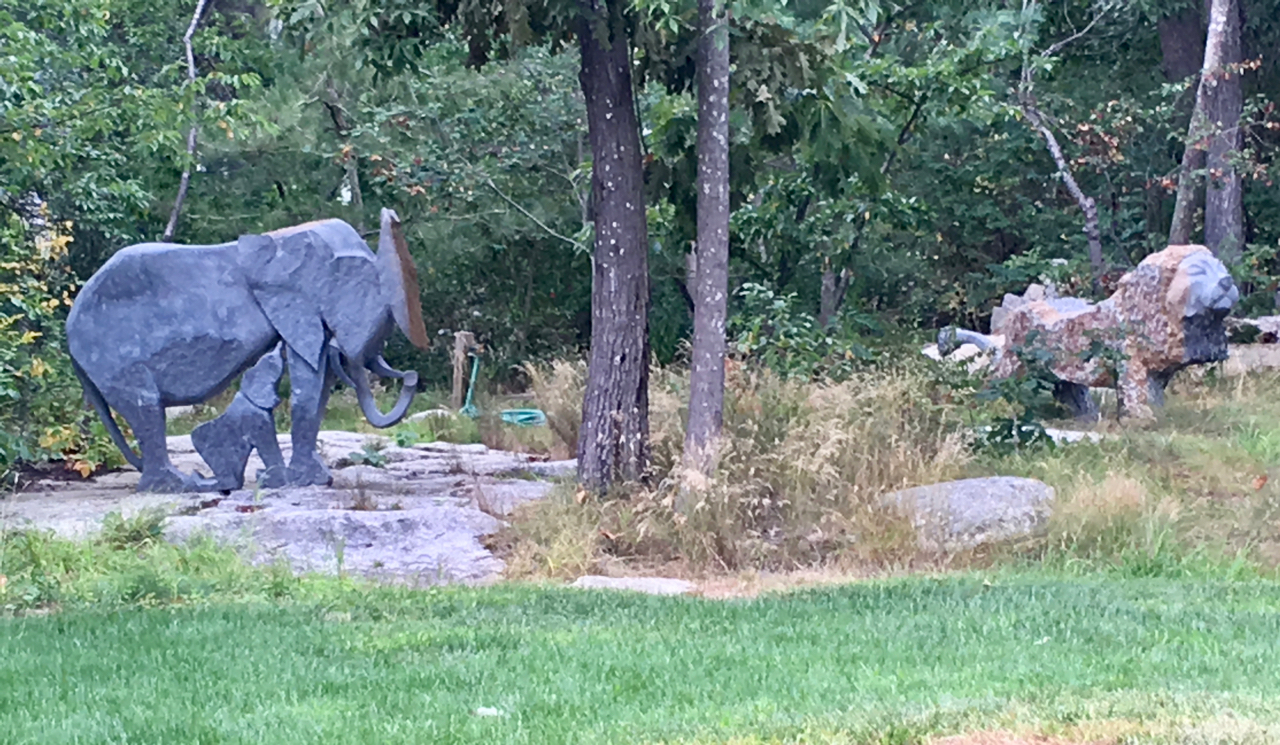 One of the neighborhood surprises: a private menagerie of stone animals that can be viewed from the road. (Credit: Hilary Nangle).

On walks, we found treasures by exploring the neighborhoods flanking the Emerson Inn by the Sea. One evening we moseyed around cozy Pigeon Cove, where granite breakwater-backed fishing shacks crowd the harbor’s edge. Another evening, while strolling through the residential area just north of the inn, we stumbled upon a stone menagerie—an elephant, an ostrich, a lion, and other critters—in a private garden viewable from the road.

Each evening we returned to the inn, settled into a couple of those irresistible porch chairs, and rocked gently through the sunset. Watching sky and sea merge into inky darkness, it was easy to understand why Ralph Waldo Emerson kept returning. I expect we will, too. 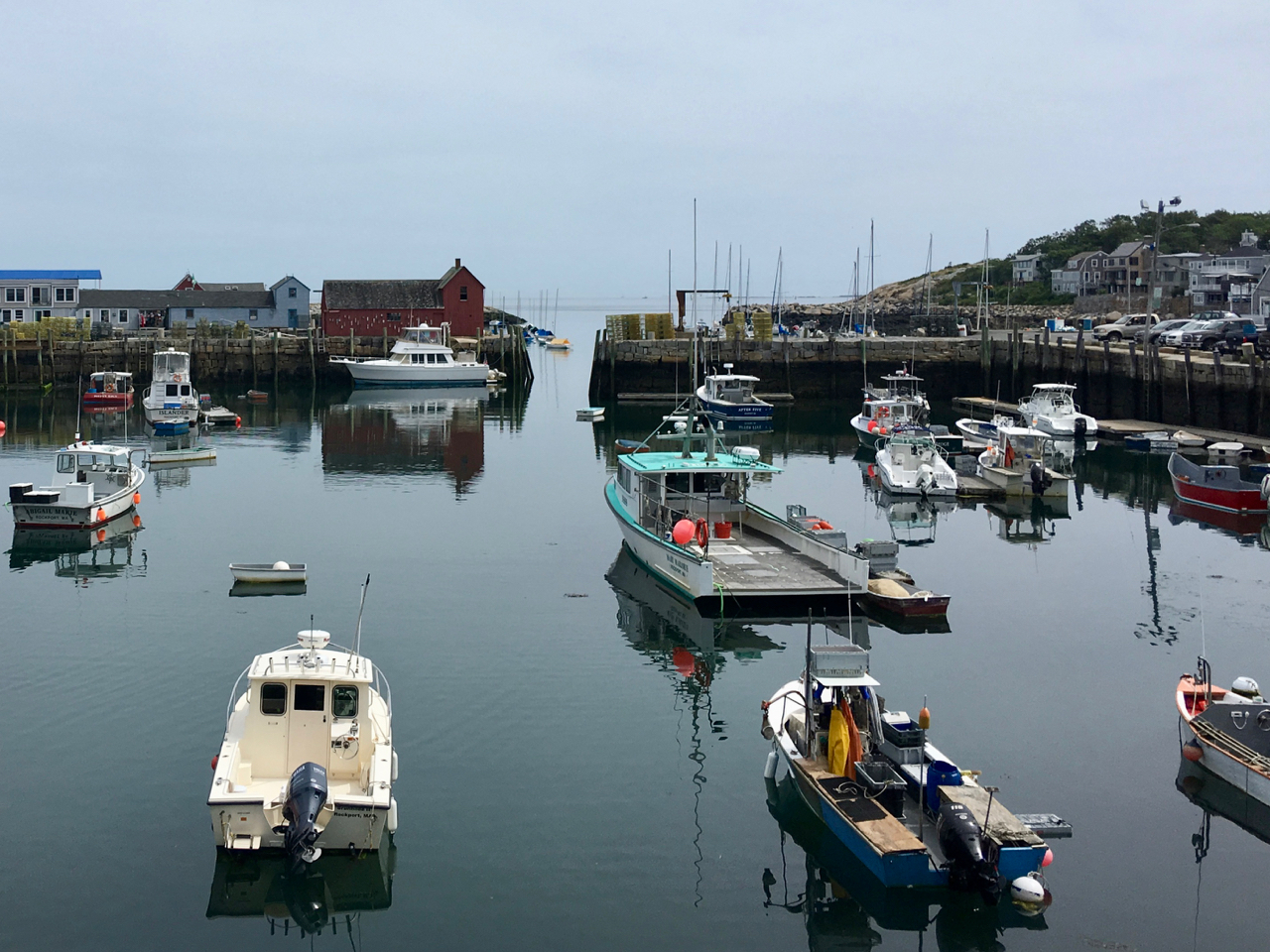 Disclosure: The author’s stay was hosted by the Emerson Inn by the Sea but any opinions expressed in this post are her own.