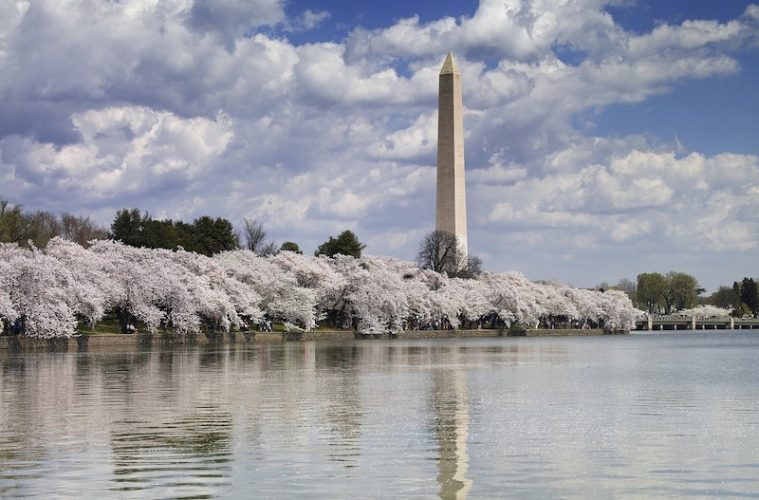 Forget the politics and indulge the senses in a palatial stay in our nation’s capital.

Follow the footsteps of our country’s movers and shakers inside historic hotels draped with lavish décor and enjoy primo dining in restaurants that host today’s highbrow clientele. Then off to Arlington for brunch, with a trip to the Arlington Cemetery paying tribute to the heroes that built this country. 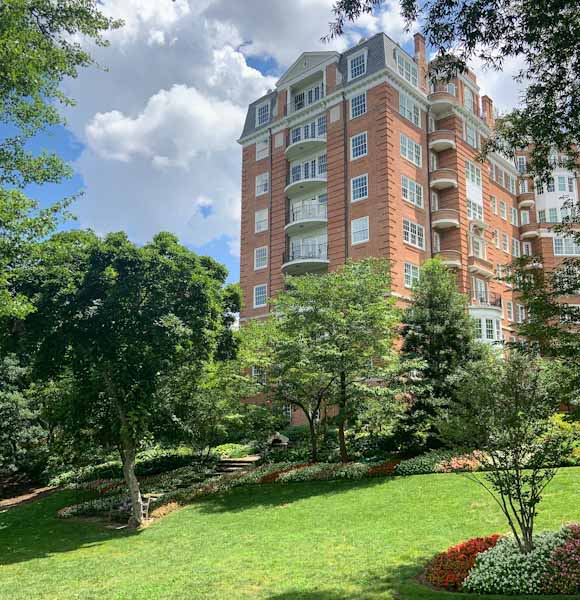 Exterior of the Wardman Park Hotel

Harry Wardman built the Wardman Park Hotel in 1918, but he almost didn’t make it to the United States. In 1889, the 17-year-old Wardman boarded a ship in Yorkshire, England, en route to Australia. Instead, he landed in New York with only seven shillings in his pocket. He became a master builder of stairs and then moved to Washington, DC, as a contractor in the nation’s capital.

The Marriott Wardman Park Hotel is much like an English castle and fits perfectly in the Old Woodley Park Historic District.

The hotel’s brick towers rise above the sculptured grounds. Many accommodations offer balconies overlooking a storied vista. Ask for one of their six-room suites complete with stately décor. In the living area, multiple chandeliers cast a jeweled glow across a full dining room, sitting room and small kitchen. The living room offers a generous-sized television, as does the bedroom, and two full baths. 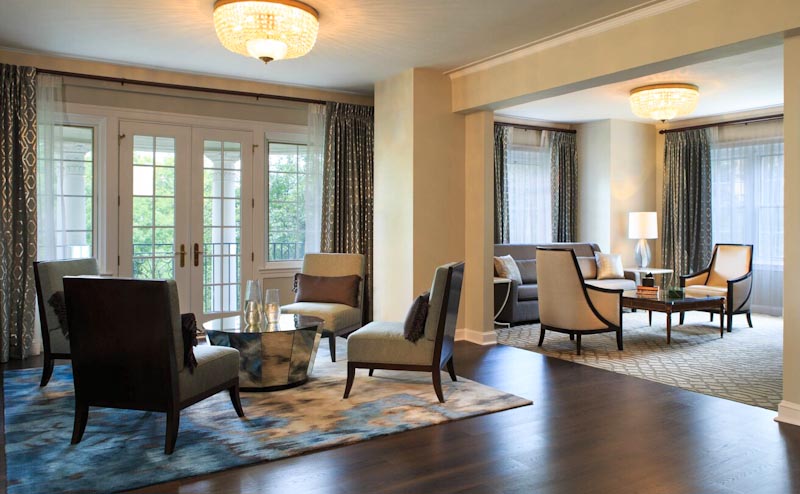 Enjoy the view from the balcony with sweeping gardens in a palate of pastels, not one impoverished leaf or wilted flower. 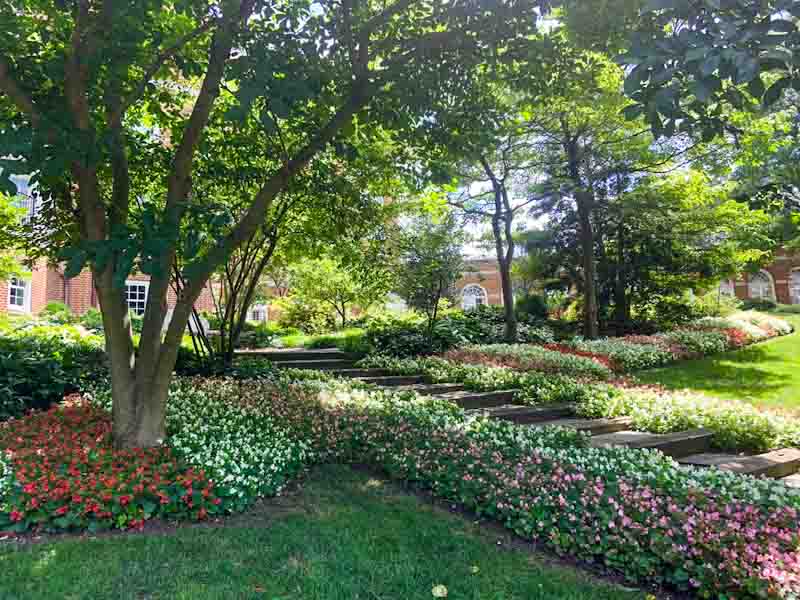 Equally enchanting is the hotel’s historic neighborhood, Woodley Park, named after its lofty forests; the present boundaries were laid out in the 1870s. Strings of row houses and townhouses were built in the early years of the 20th-century.

Just off the grounds of the hotel is Woodley Road and nearby Cathedral Avenue: Both bring to mind an Old-English novel, a charming tale of manicured gardens and urban royalty. Stroll the shaded sidewalks, admire the stunning architecture, and take time to mingle with the residents. One encounter: A delightful chat with a gent walking his tiny pup and professing his love for the animal. 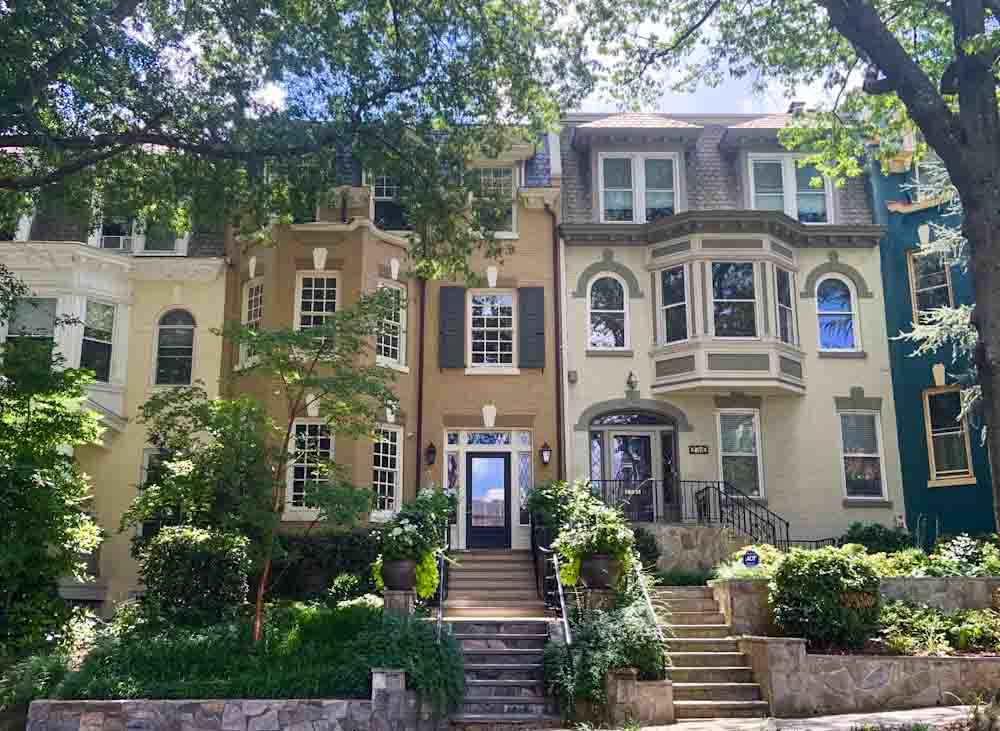 Historic row houses on Cathedral Ave near the Wardman Hotel

Nearby is Connecticut Avenue filled with shopping, numerous restaurants and the standard fare of indulgent shops. Why not continue the spoiled attitude, and give in to a double-dip ice cream cone for lunch? A most regal flavor, butter pecan, infused with swirls of caramel in a most decadent delight. 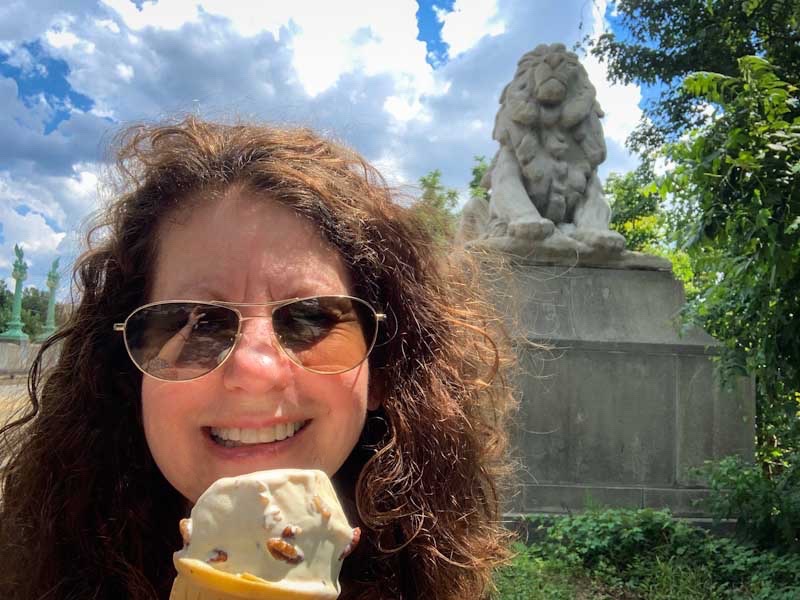 Not far from the Capitol is The Mayflower Hotel, a prized stay with more than 90 years of celebrated history. It’s home to a legacy of grand political parties, Presidential inaugural speeches and occasions of intrigue and scandal. After all, this is the nation’s capital.

In a most auspicious welcome, the doormen open gilded doors leading to a corridor crowned with crystal chandeliers. Artwork and history of honored guests is the core of the Mayflower mystique. The furnishings and décor blend perfectly with its grand address, artistic renderings of elite guests including presidents, first ladies, queens and Amelia Earhart grace the lobby’s second floor. Walking the halls, guests feel a most privileged presence, knowing they are following the footsteps of those who built this country: Those that moved us, those that brought us honor, and those we miss so dearly. 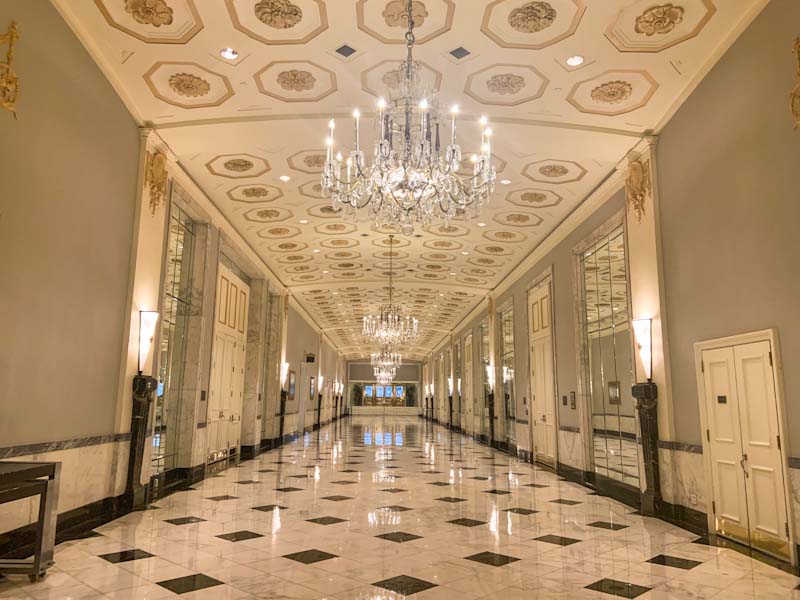 Guest rooms own a crisp palette of warm grays with furnishings of refined wood, stone, glass and upholstery in jewel tones. Behind the bed is a signature “wall of fame,” a vinyl recreation of the hotel’s guest book complete with signatures of President John F. Kennedy, Amelia Earhart, Winston Churchill, Sophia Loren, and J. Edgar Hoover.

The Mayflower is pure sophistication and a commanding icon on Connecticut Avenue, known as the “Fifth Avenue of Washington, DC.”

The hotel is within easy striking distance of The National Mall, business district, and fashionable Georgetown. Nearby, find shops, restaurants, nightclubs, art galleries, and music venues in the Shaw, Dupont Circle, and Foggy Bottom neighborhoods, and along with the U Street Corridor. It’s like walking through the pages of a history book, historic architecture at every turn, and the National Geographic Museum across the street.

A visit to DC isn’t complete until you dine at The Occidental on Pennsylvania Avenue, lauded for its contemporary cuisine juxtaposed with an extraordinary history. Dine amid the stately architecture accented with photos of revered guests, from U.S. presidents and high-profile politicians to iconic athletes and Hollywood celebrities.

Indulge the senses in a pre-theater dinner, a lazy weekend brunch, or a divine dinner, while sipping an old-fashioned and keeping an eye out for the political elite. For a more intimate affair, opt for the bar, where one can savor bar snacks during happy hours with crab croquettes or order up a grand entrée, such as a grilled 8-oz steak complete with mushroom, charred onion relish, and truffle sauce. 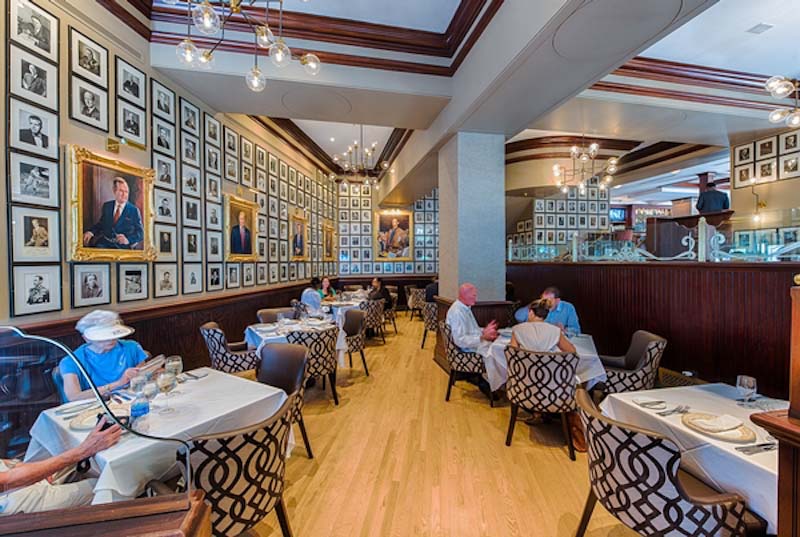 For a more spirited experience or maybe a power lunch, dine on the outdoor patio with views of the nation’s most iconic streetscapes: such opulent flair in a dizzy display of ornate architecture repeated along every block. The outdoor terrace features a canopy of trees and vibrant royal blue umbrellas with glimmers of light bouncing across the tables.

Occidental’s handcrafted cocktails continue the spirited joie de vivre. From The Elephant in the Room to the Purple Heart complete with tequila and beets, each owns a signature combo of rum, vodka, tequila, liqueur, bourbon or whiskey. The presentation, be it Occidental’s exquisite cuisine or its craft cocktails, blend perfectly with its history of distinguished guests. 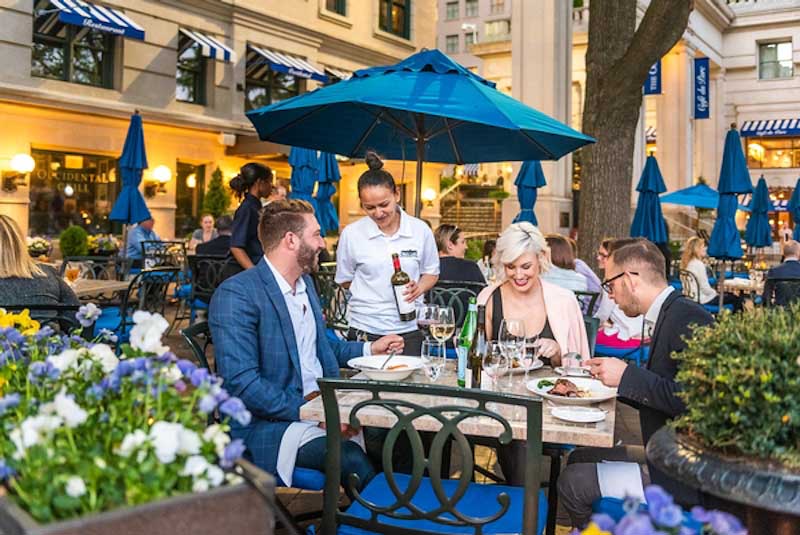 A nostalgic nod to Arlington

Worthy of a detour from DC, Bayou Bakery is a must stop in Arlington. Owner, New Orleans-born Chef David Guas, is true to his word. Be it breakfast, lunch or the cocktail happy hour, it is, as proclaimed, “Creating a Community & Cultivating a Taste For the South.” National publications agree it’s sinfully delicious, a nostalgic tribute to Guas’ hometown in the Courthouse neighborhood of Arlington, Virginia. Loyal diners experience all the flavors and comforts of New Orleans, even sno-balls. 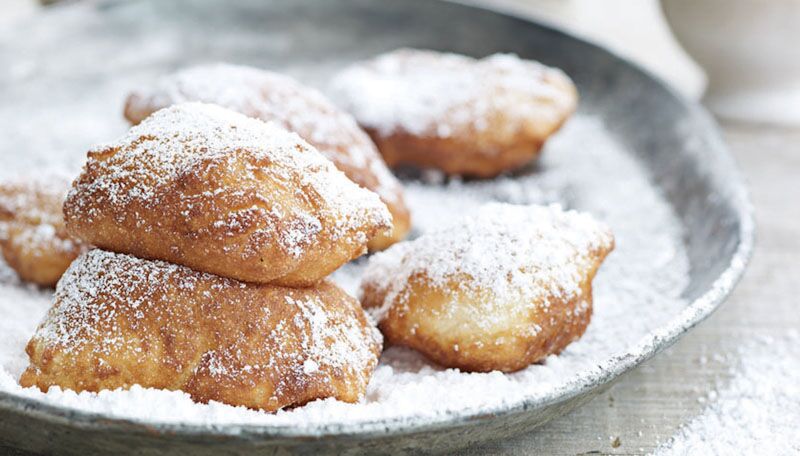 The kind of place that demands a second latte, tables are packed with bouts of laughter from college ingénues to business professionals. Some, buried in laptops, sip ice coffees, while others dive into multiple plates of beignets and buttermilk biscuits covered in homemade pepper jelly and Creole cream cheese. The lunch menu lists red beans and rice, shrimp Creole, along with BBQ pork and roast beef sandwiches, both served dripping with sauce. And a telling sign of a primo fare: a pile of napkins crowded around each plate. Happy hour features drink specials, festive moods, and lots of NOLA music from funky blues to jiving jazz. 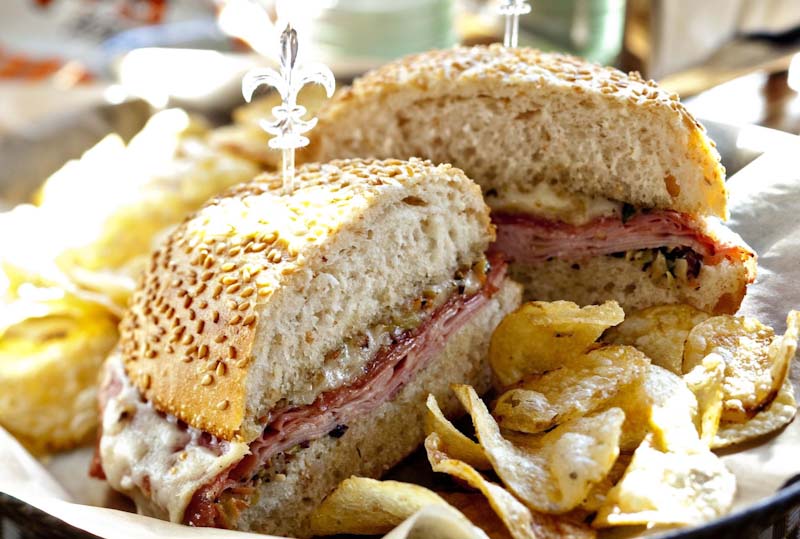 Next stop is Arlington Cemetery. More than a resting place for our most treasured heroes, it is a pilgrimage site for visitors from all over the world. Be sure to stop at the Welcome Center first to view the exhibits, pick up walking maps and get information on the various tours.

One of the most visited sites is President John F. Kennedy’s grave. Among a stage of geometric stones are six slate headstones and a single eternal flame. Next to the President’s marker is First Lady Jacqueline Bouvier Kennedy Onassis, and two stones for the Kennedy infants that died, one a miscarriage and the other just days old. Brothers Robert and Ted Kennedy also are laid to rest here. (The cremated remains of son John F. Kennedy Jr., along with his wife and sister-in-law, were buried at sea.) 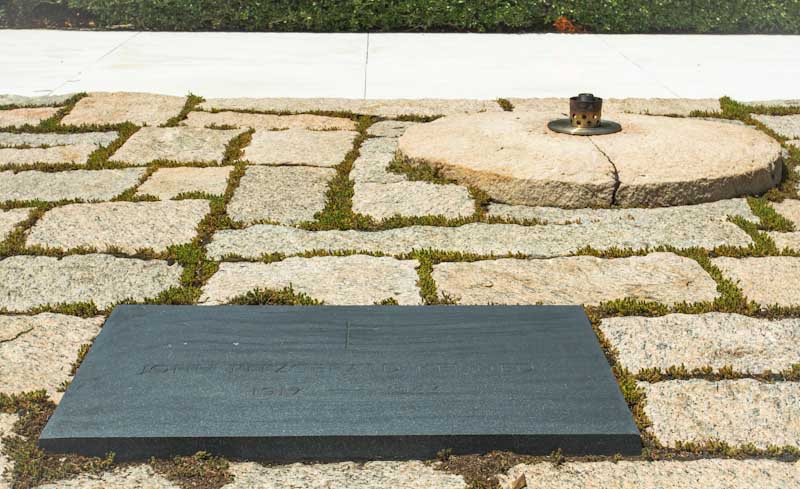 After the assassination, the First Lady consulted with Robert F. Kennedy and the Secretary of Defense, Robert McNamara and agreed President Kennedy would find his forever home in Arlington. A wise choice, as more than a half-century later, millions visit the Kennedy plot, and more than 16 million paid their respects in the three years after his death. 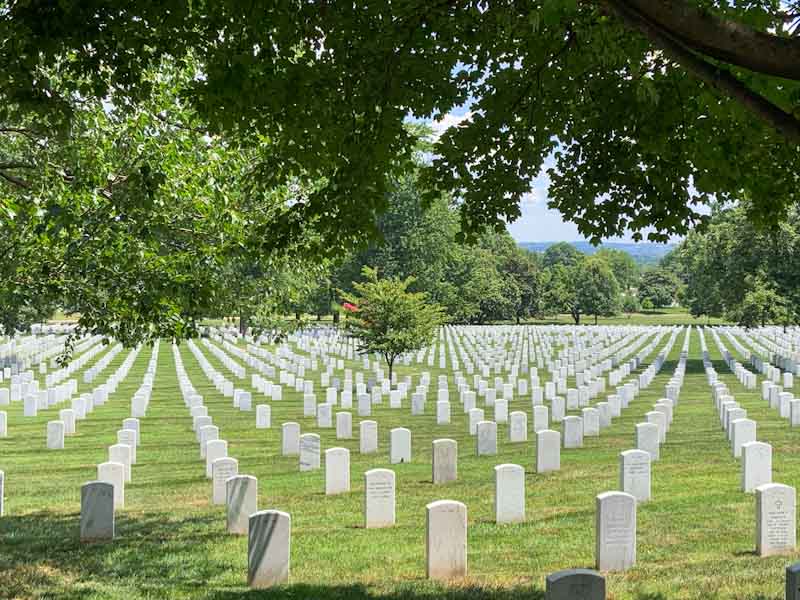 Arlington Cemetery just across the Potomac River from Washington, DC

Also worth a visit are several monuments outside the confines of military duty. A striking marker built with 270 blocks of red Scottish sandstone pays tribute to the 270 lives lost in the terrorist bombing of Pan Am Flight 103  over Lockerbie Scotland, on December 21, 1988.

The Space Shuttle Challenger and Columbia disasters both have their shrines as well. In strolling through the grounds, pay close attention to the families and their dialects. Visitors from across the world come here to pay respect for a country that joined them in their fight for freedom. 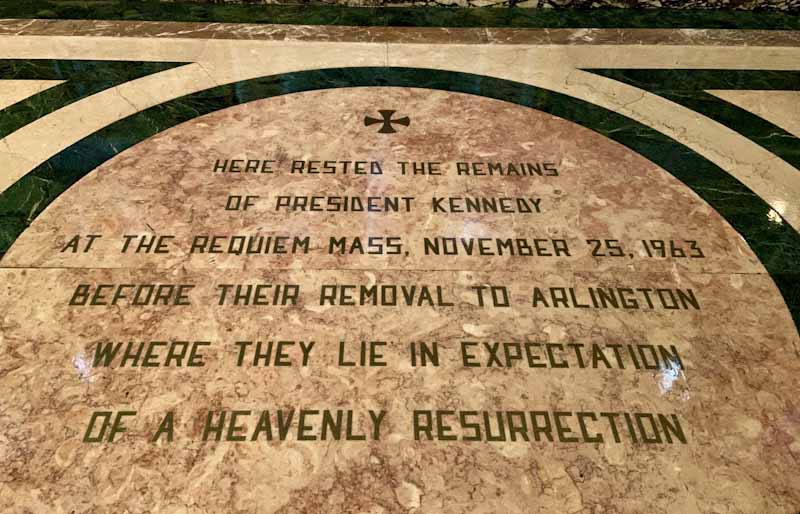 Photo credits: All photos by Deborah Burst unless otherwise noted.

Disclosure: The author paid for her own travel expenses including an Amtrak journey across the south from New Orleans to Washington DC. All expenses at the hotel and restaurants were kindly paid by the management. 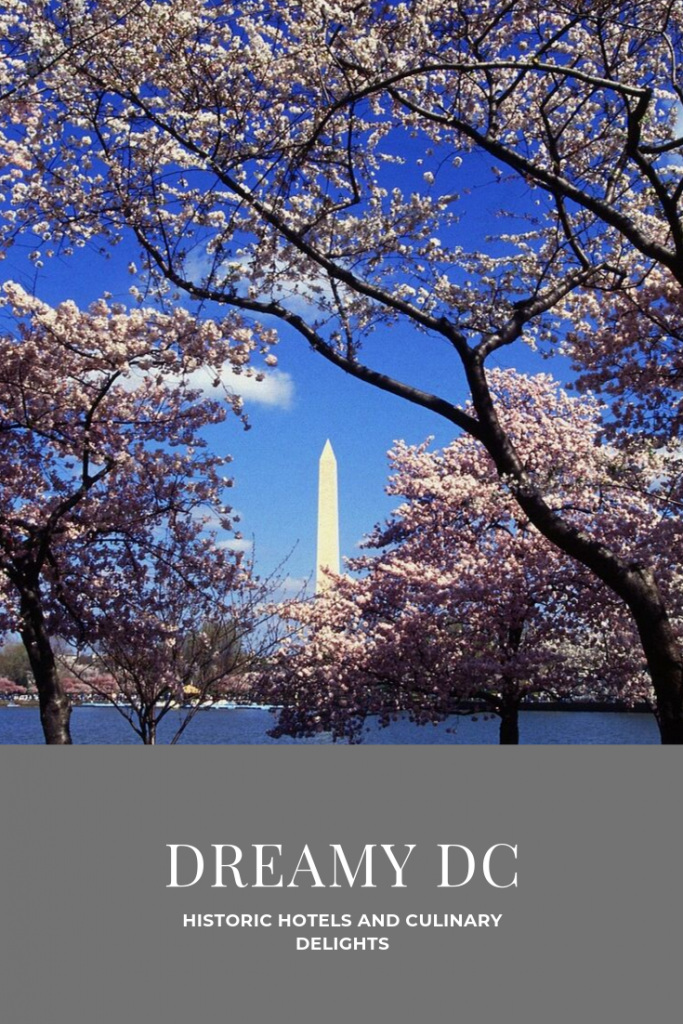