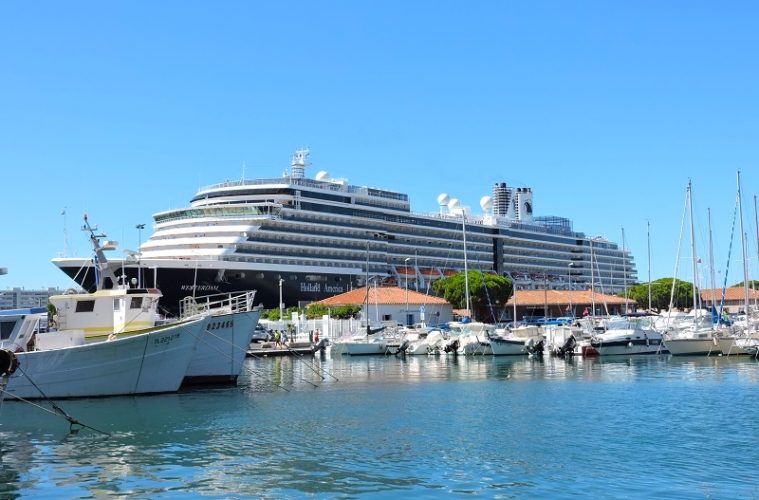 Six Mediterranean islands, eight culturally diverse countries and 22 hot August nights. How do you pack so much of Europe into so little time and still wake up each morning feeling fresh and ready to see more? Just add one stunning cruise ship to your travel plans.

Cruising through the Mediterranean, as my husband and I discovered while sailing from Barcelona to Venice, is the only way to go—especially during the height of summer.

My favorite redos include places for wining, dining and being entertained.

On the cocktail scene, the arty Gallery Bar replaces Westerdam’s little-used nightclub. The walls are decorated with dozens of framed paintings, plus the requisite flat screen TVs to amuse sports fans on big game days. The drink menu? It’s all about hand-crafted libations created by “King Cocktail,” aka master mixologist Dale DeGroff. I’ll vouch for his take on a classic margarita. 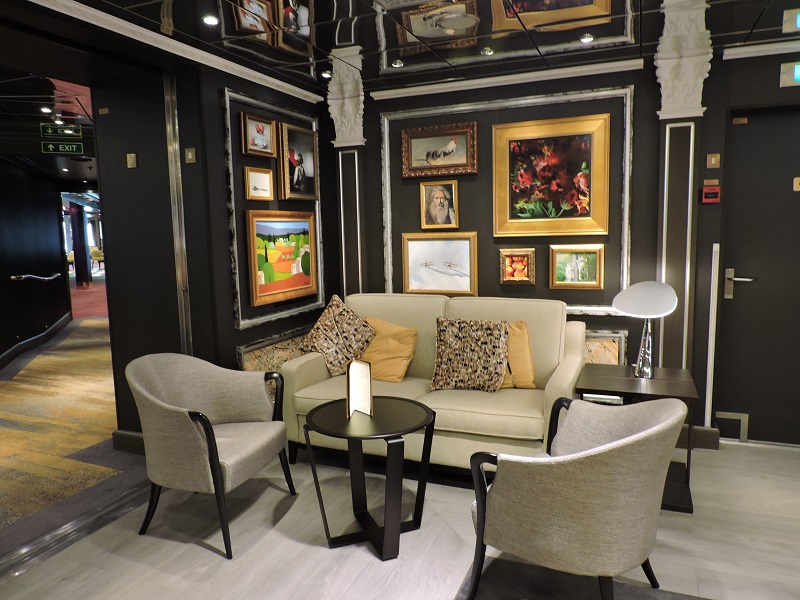 Anyone who has been cruising recently has probably encountered an onboard restaurant overseen by a renowned chef. Crystal Cruises has Nobu. Oceania has Jacques Pepin. The Westerdam, while in Europe, features Michelin 3-star chef, Jonnie Boer, who is well known in the Netherlands. The Boer- inspired pop-up restaurant, De Librije, usually happens once a cruise, offering a five-course tasting menu paired with wine. With two choices per course, the exquisitely presented dishes include lobster with avocado, crispy pork belly, seared bass, miso-glazed duck breast and deconstructed apple pie.

Also, once per cruise is Rudi’s Sel de Mer (sea salt in French), named for Holland America’s master chef, Rudi Sodamin. It’s his contemporary twist on French classics, much of it seafood. Appetizers may be escargots, foie gras torchon (it’s divine) or bouillabaisse. Entrees include Dover sole, Maine lobster, a fresh catch of the day and rack of lamb. Both classy menus pop up in the ship’s revamped specialty restaurant, the Pinnacle Grill, and both require reservations and do cost extra. 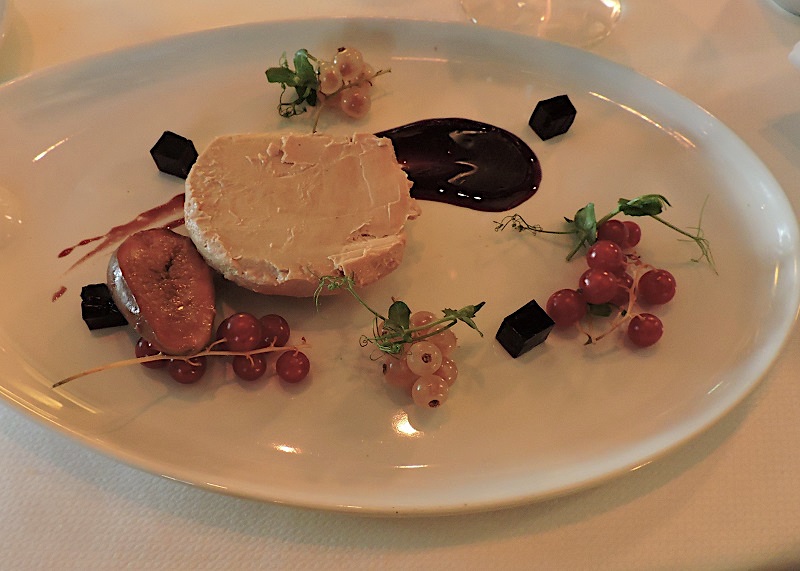 With the completion of Music Walk, you have the nightly option of three distinctly different music venues—plus the main theater show. Begin your walk adjacent to the casino where Billboard Onboard showcases two singing piano players who tickle the ivories with their remarkable repertoire. Further along the corridor is B.B. King’s Blues Club for blues and jazz. Near the aft of the ship comes Lincoln Center Stage where a quintet of strings and piano put on a classic act.

An eclectic sampling of shoreside attractions

Blame it on the generous platter of tapas and the pitcher of sherry. During the ship’s stop in Malaga, I couldn’t get enough of Spain’s iconic flamenco dancers. “It’s the music of the shoes,” commented our guide for the Andalusian Highlights tour. The female dancer’s white shoes were of the large-heeled tap dance variety. Her male partner’s black boots were of soft leather. Together, their dance was an intoxicating blend of tap and Irish folk, as in Riverdance. 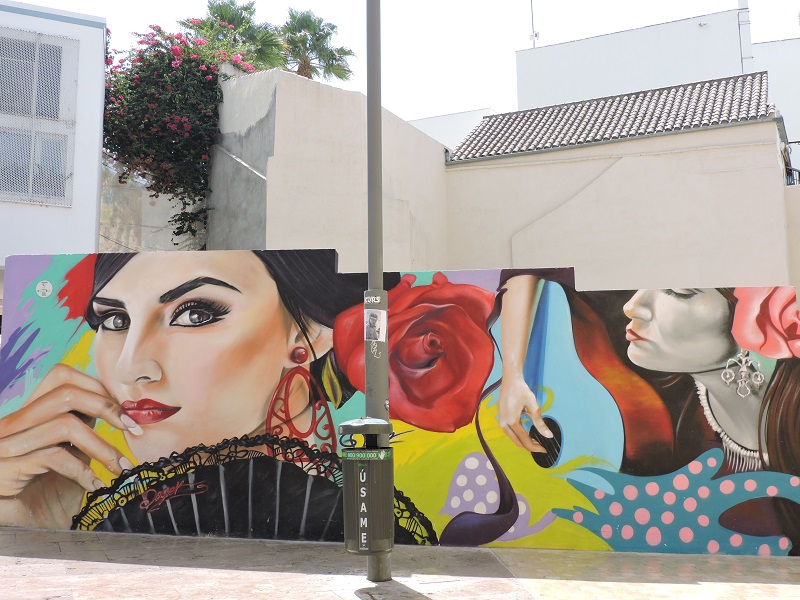 Following the flamenco show, our tour moved to another Spanish institution—the bullfight. We toured Malaga’s bullring, which seats 8,000 and is still in use. Brightly colored posters out front announced a festival with bullfighting to begin that very weekend. 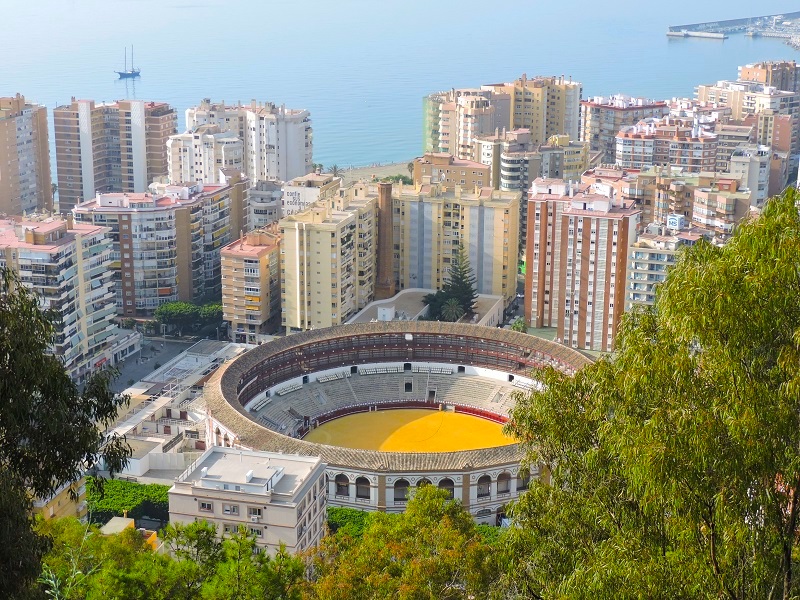 Malaga bullring, still in use

A bull, to be qualified for a life-or-death encounter, must be four years old. This detail I learned on a ship’s tour in Cadiz. Bullfighting being a controversial topic, only a handful of us joined the excursion to Los Alburejos Farms, a family-owned establishment where horses and fighting bulls have been bred for generations. Elizabeth, our farm hostess, grew up around the animals. Her grandfather, father, brother and son were all skilled bullfighters who confronted the bulls from horseback. In the farm’s indoor bullring, Elizabeth pointed out photos of such celebrity visitors as Hemingway and a former President of Spain. Our visit ended with tapas (cheese, sausage, chips, olives, omelet squares) and sherry served on the shady veranda.

On the island of Palma de Mallorca, I picked up another tidbit at the Majorica pearl factory. These pearls never saw an oyster. They are totally man-made. I dropped into the factory/jewelry shop during a tour to the Caves of Drach (dragon). Deep in the caves, I marveled at a brief, classical concert performed in rowboats (piano included) floating on Europe’s largest underground lake.

Moving on to France, my husband and I happily poked around Toulon’s morning market. Blocks of pedestrian-only streets were packed with locals shopping for fruits, veggies, flowers, fresh fish and household goods. I found the made-in-Marseille scented soaps (lavender, melon, vanilla) irresistible. I regret not buying more but was fearful my suitcase would be overweight on the flight home. 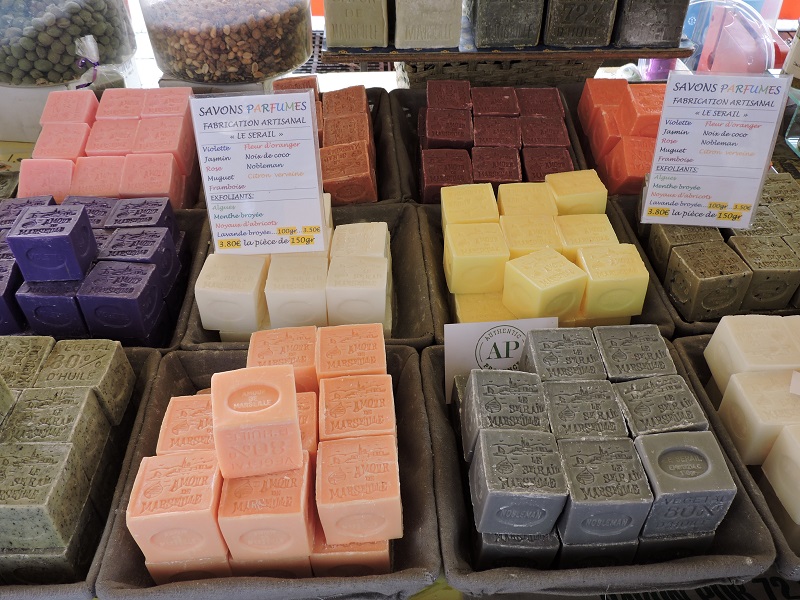 Next up, Italy. Instead of hopping the bus to crowded Florence from the port of Livorno, we opted for a walking tour of the charming walled city of Lucca. The walls—most still standing and now boasting a parklike hiking/biking trail on the ramparts—were built in the mid-1500s. In those days, Lucca’s silk industry was prospering, and Florence was the prime foe. 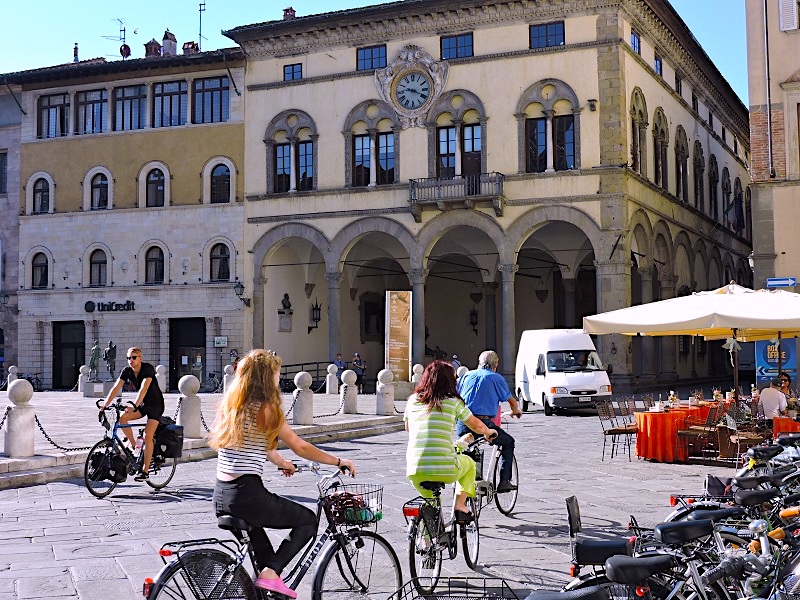 Lucca, Italy as charming as ever

Having visited Lucca some 20 years ago, I was concerned that it might be modernized beyond recognition. Not to worry. Lucca is as delightful and old world as ever.

While many fellow cruisers chose to end their vacation in Rome, more than 400 of us continued aboard Westerdam. No tears were shed nor bags packed quite yet. The next 10 days revealed totally different ports-of-call in four additional countries—Malta, Greece, Croatia and Montenegro.

Of these, Malta’s island of Gozo astonished us for being extremely arid and dusty. Did I mention the heat, sun and lack of shade? There’s nothing like a first-hand encounter to shatter my illusion of Gozo as a tropical paradise.

In sharp contrast, Kotor, Montenegro provided miles of lovely fjord-like landscapes, with steep green hillsides rising from the deep blue waters of the bay. The compact, medieval city of Kotor is ringed by what looks like the Great Wall of China climbing up the cliffsides. Start early and bring water if you plan to brave the two-hour-plus climb. Those who did reach the top, said “the views were spectacular!” 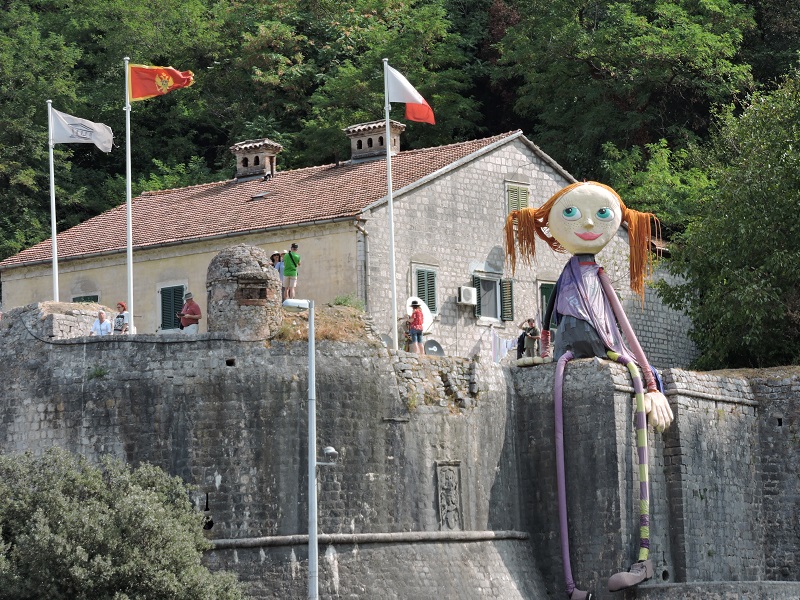 All great trips must come to an end. Our final port was Venice where our ship docked overnight, giving us time to explore one of the most fascinating cities on the planet. Once again, cruising proved to be the only way we could possibly see so much, so comfortably in three weeks’ time. 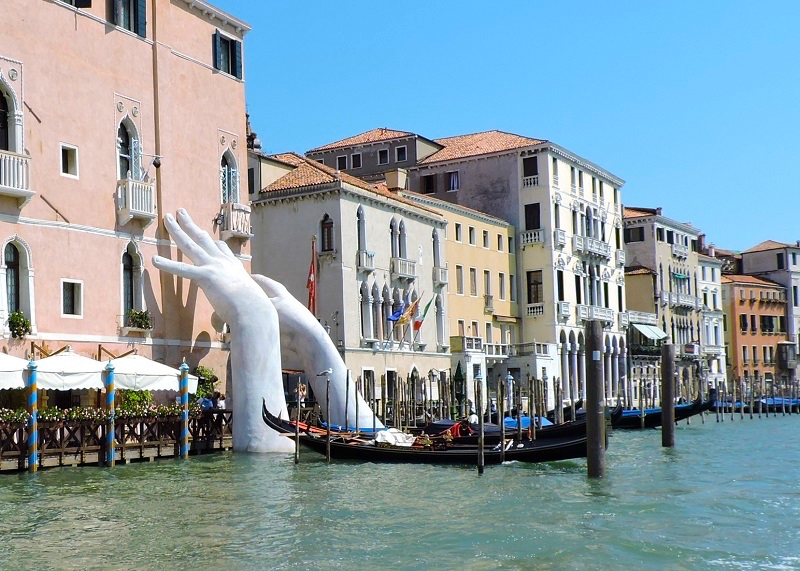 Venice, the spectacular end to our cruise on the Holland American Line Westerdam

A portion of the writer’s cruise was hosted by Holland America Line. 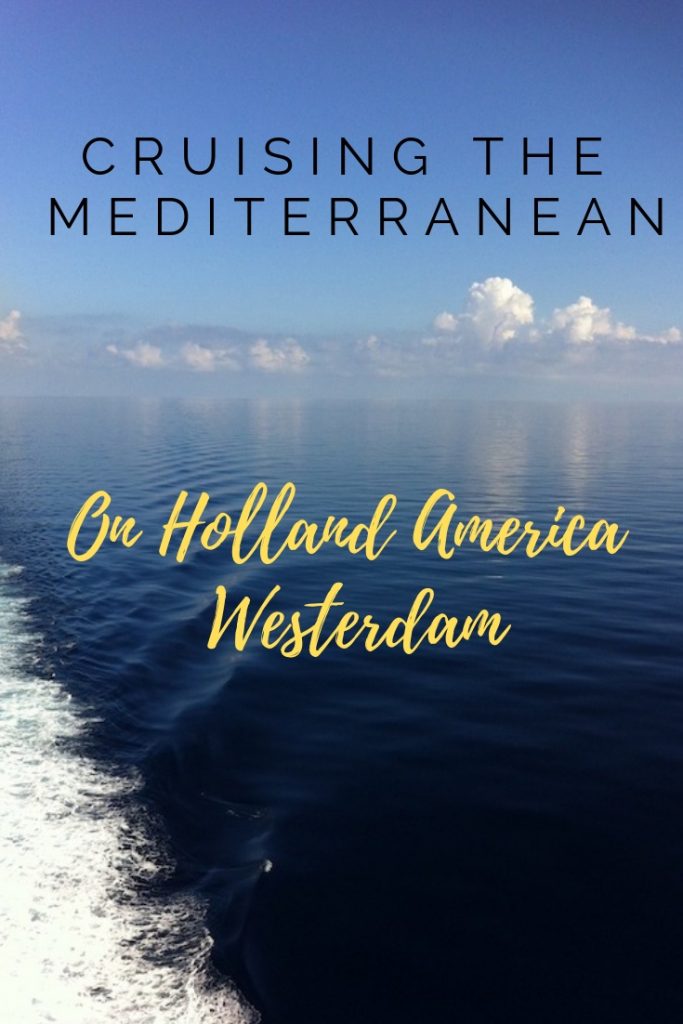