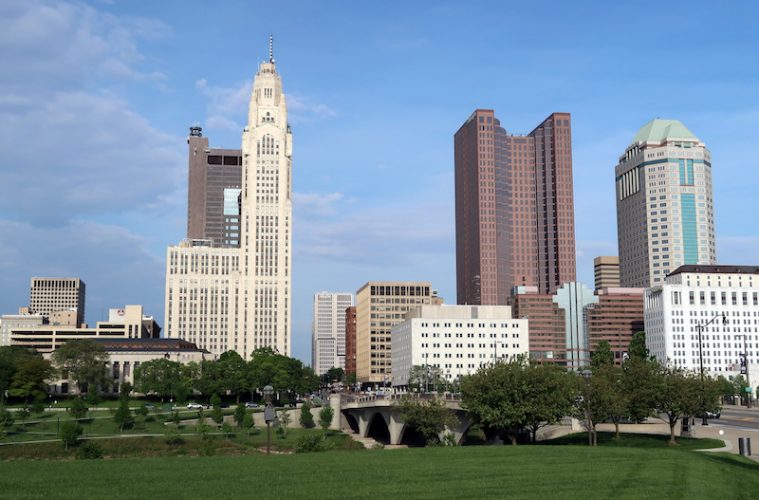 No, it’s not Cleveland nor Cincinnati but rather under-the-radar Columbus. With a population fast approaching 900,000, Ohio’s capital has more residents than Cleveland and Cincinnati combined; it even surpasses San Francisco. Columbus is, in fact, the fourteenth largest city in the country. Its surprising and thriving diversity  supports an exploding global food scene you wouldn’t expect in a Midwestern town. You can literally eat your way around the world. Or, you can drink your way around town following the Columbus coffee and ale trails.

Columbus food and drink: Fueled by creativity and diversity

That’s a long way from the time when Columbus was known mostly for its signature buckeyes (peanut butter and chocolate candy) and Johnny Marzetti (a spaghetti and ground beef casserole), though there’s nothing wrong with those. But now Columbus food and drink is known for embracing new concepts, making it popular with companies wishing to test new products before expanding around the country.

And with a diversity fueled by 55,000 students attending Ohio State University and an international population attracted by entry-level jobs and low cost of living, Columbus offers seemingly unlimited dining options. Dishes from Senegal, Vietnam, Somalia, Ghana, Brazil, Tibet, Nepal, Kenya, and many other countries are served in restaurants, at international markets and from food trucks. Add the city’s coffee scene, bars, breweries, and distilleries, many with food menus, and there’s something for everyone in Columbus. Most Columbus food and drink establishments seem committed to using local ingredients as much as possible.

“People come with low expectations, and we can elevate them.”

—Columbusite (as residents are called)

Breakfast and coffee in Columbus

Columbus boasts what could be the most vibrant coffee scene in the Midwest, where the details lie in the beans, the roasting, the style, and even the local grass-fed milk and cream. If you’re really into coffee, be sure to explore the Columbus Coffee Trail, featuring 17 locations clustered mostly in and around downtown. Visit four of them, and you’ve earned a free T-shirt.

Otherwise, start your day with breakfast in German Village, originally settled by Germans in the mid-1800s and known for its handsome brick homes, shops and businesses. Fox in the Snow, located in a former movie theater with brick walls, high ceilings, and exposed pipes that give it a slightly industrial look. The owners are a wife-husband duo: Jeff Excell excels at coffee and pastry chef Lauren Culley. They met while working at Blue Bottle Coffee in New York and decided to move to Lauren’s hometown to open what would become one of Columbus’ hottest coffee and pastry shops. Other locations are in Italian Village and New Albany. 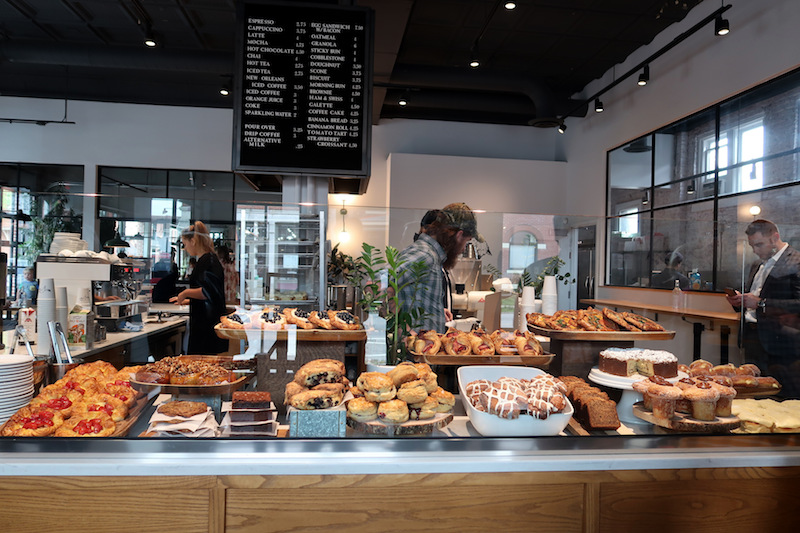 Some of the offerings at Fox and Snow

“Columbus is good in responding to new ideas and more appreciative than anywhere else I’ve been. People attach to you in a way they don’t in New York.”

Not far away is Pistacia Vera, a sister-and-brother-owned shop (family connections seem to run thick in many Columbus enterprises) offering coffee specialties, pastries and desserts. Macarons filled with pistachio, caramel pecan or seasonal flavors are the most popular food items on the menu. You can also make a satisfying meal with a quiche or Croque monsieur, finished off, perhaps, with a tart, torte, or éclair. As for drinks, the café’s art latte is a big seller. So, too, is the Café Vera, a cortado with almond vanilla, citrus twist and cinnamon. 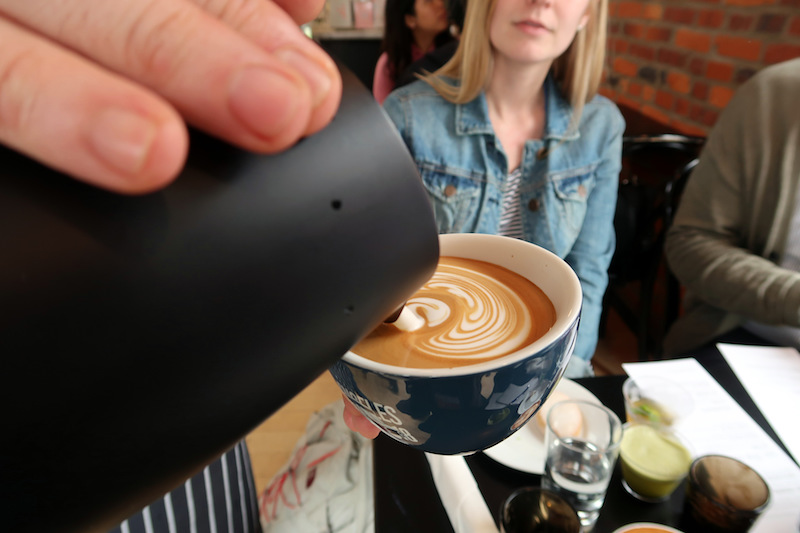 Markets and food trucks, an integral part of the Columbus global dining scene, are where many sit-down restaurants got their start. So, it makes sense to start at North Market, in business since 1876. Now it’s one of only three public markets remaining in Ohio (the other two are in Cleveland and Cincinnati). North Market is home to local butchers, bakers, stalls offering international dishes, and an outdoor weekend farmer’s market in summer. Because it’s located downtown near the convention center, it buzzes with locals and visitors alike. 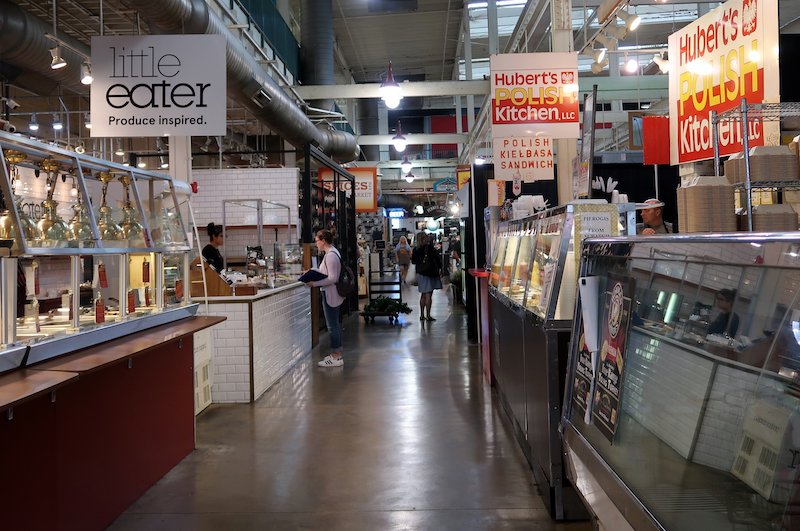 Dos Hermanos started out as a food truck (now used mostly for special events). The owners, another husband-and-wife team, met in the food business. It offers build-your-own tacos, enchiladas and tamales cooked in banana leaves.

Momo Ghar Market, with a location also at Saraga International Market (see below), offers a limited menu of Tibetan and Nepalese specialties and attracts hungry diners who come specifically for its food. 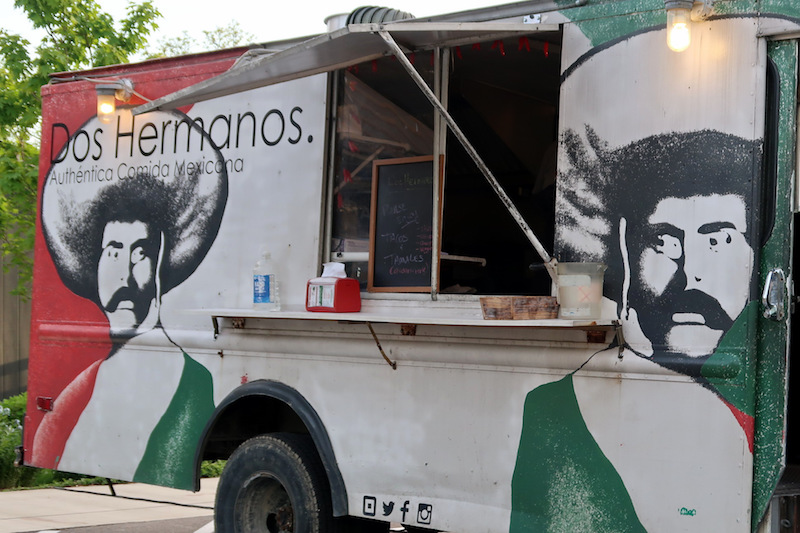 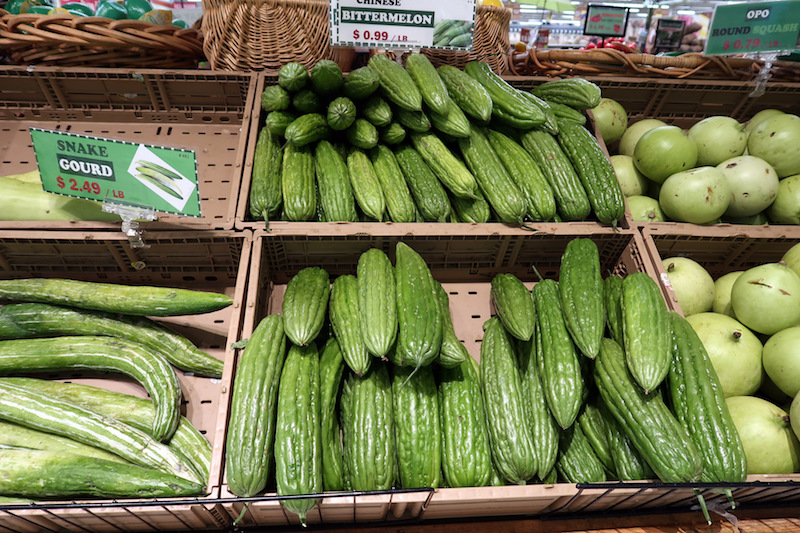 Black Radish Creamery specializes in artisanal cheese, including its own creations aged in two cheese caves and made with milk from a local dairy, which it pairs with fruit preserves made from local fruit. For dessert, you’ll want to try Jeni’s Splendid Ice Creams, which got its start in 2002 in North Market and now has more than 35 shops offering artisanal choices using local ingredients whenever possible. 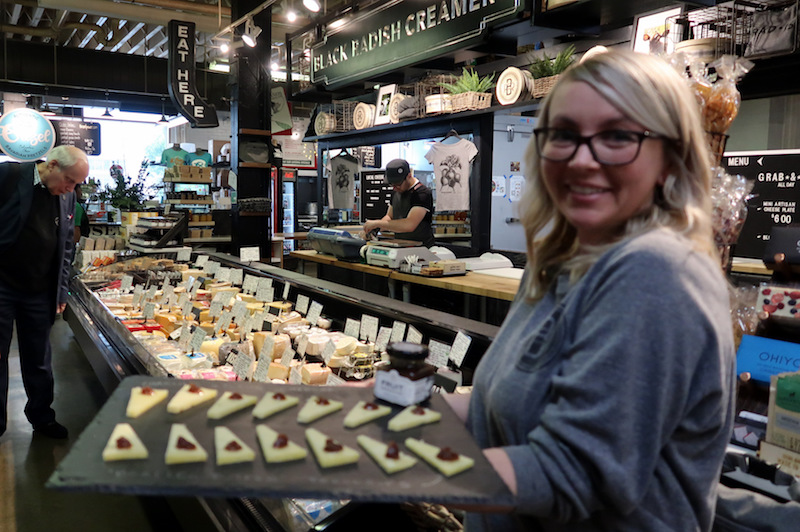 Saraga International Grocery literally spans the globe, making it both an interesting and educational experience. With its low prices and huge variety, it attracts locals and chefs, who shop for fresh and live seafood, baby goat, beef feet, taro root, snake gourd, Chinese bitter melon, Ghana yam, plantain, coconut, juices, crackers, candy, and much more. There’s even a threading salon, in case you’re considering having hair on your face removed.

Food trucks are an important component of Columbus’ casual food scene. Food Truck Thursday takes place every week, May through October, at Columbus Commons. This downtown playground offers more than 200 free events annually. Columbus even has a free Food Truck Festival in August, with more than 60 food vendors plus arts and crafts stalls strung along the banks of the Scioto River that slices through the city.

For sit-down meals, Columbus’ some 60,000 Somali residents–the second-largest Somali population in the country after Minneapolis–translates into many restaurants serving that country’s cuisine. These include Hoya in North Market and Hamdi Grill, which offers roasted goat, chicken kebab, stew chicken, spaghetti (due to Somalia’s former Italian occupiers) and other dishes. Tandoori Grill, located in a nondescript strip mall along with other restaurants offering food from Korea, Greece, and Thailand, lists Chana Masala (chickpeas) and butter chicken on its menu, along with chicken, lamb, goat, naan and more cooked in its tandoori ovens.

If you’ve never had Kenyan food, hightail it to Wycliff’s Kitchen for its East African dishes influenced by Indian spices due to old trade routes. Try the Karanga Ngome, sautéed beef stewed with onions, fresh tomatoes and cilantro, or, on weekends, charcoal-grilled goat. 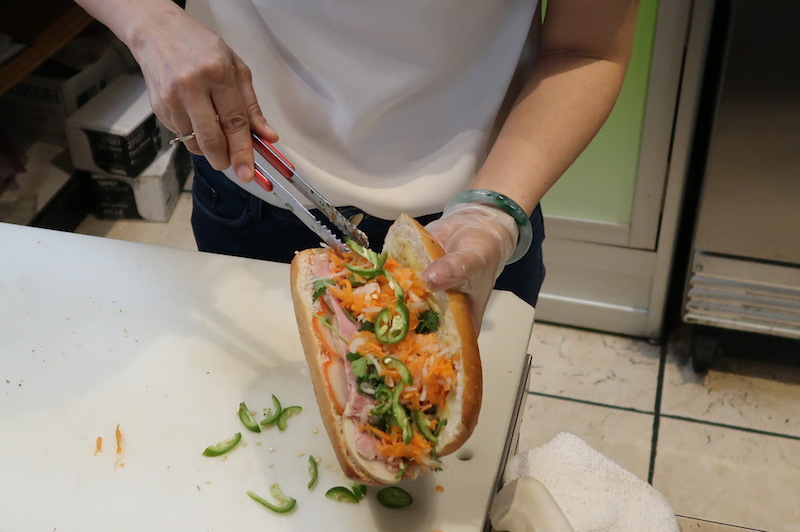 Miki Vietnamese serves up three kinds of Vietnamese sandwiches, with pork, barbecued pork or homemade chicken liver paté, served with homemade mayonnaise on baguettes made with wheat and rice flour.

Nearby is Estilo Brazil, a store/restaurant with a buffet spread for lunch and dinner. 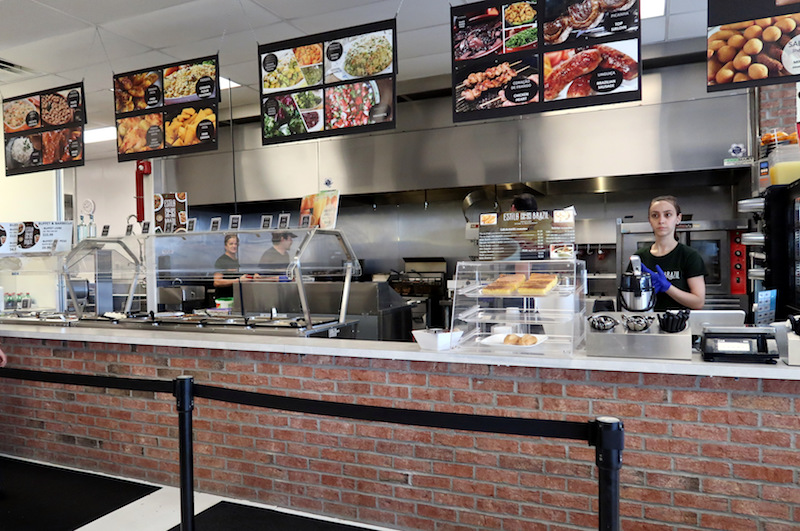 The buffet at Estilo Brazil

Before the more recent arrival of immigrants from Africa, Asia and other countries, Germans were the largest group of immigrants, settling in what is now called German Village. Here you’ll find Schmidt’s, located in a renovated livery stable and in business since 1886. It offers currywurst (a popular German street food), bratwurst, and other sausages, as well as schnitzel, sauerbraten and other favorites. Pair them with German potato salad and sauerkraut. Its food truck travels the area, with locations listed on its website.

You’re never far from an opportunity to imbibe a drink or two in Columbus. To feel like you’re part of the city scene, head up to a rooftop bar. Try Juniper, which provides ever-so-cool vistas of the Columbus skyline and craft cocktails, or Lincoln Social in the chic Short North Arts District.

Unsurprisingly, adjacent to German Village is the Brewery District (what would a German community be without its beer?). Here you’ll find Antiques on High, sister brewery to Seventh Son Brewing. It specializes in sour beers using yogurt bacteria or wild yeast for flavor. I recommend the Impure Guava, a sour blonde ale made with guava and raspberry aged and aged in oak wine barrels.

If you want a hearty meal with your ale, head to Rockmill Tavern, also in the Brewery District. Rockmill Brewery is located near Lancaster on a former horse farm where the water quality is said to resemble Belgium’s. The tavern offers its Belgian-inspired ales, IPAs, and saisons, along with roasted chicken, pork shoulder, burgers and other fare. 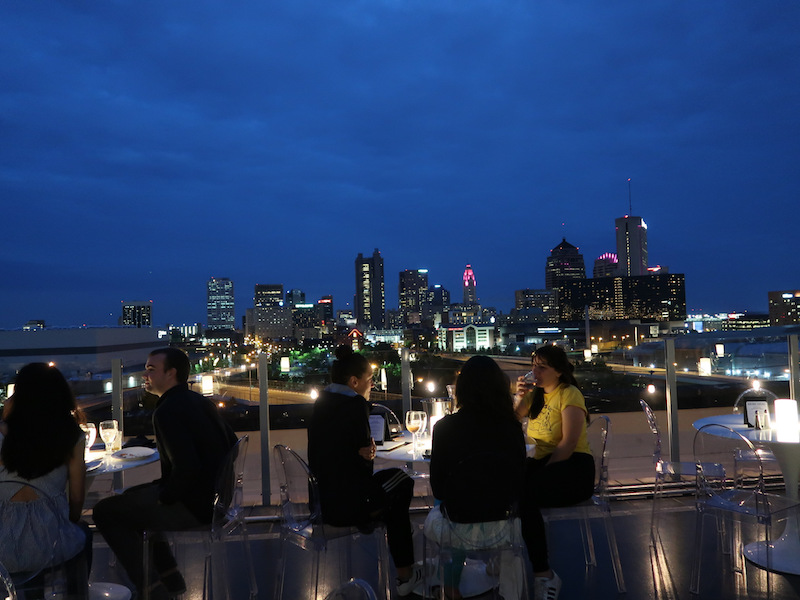 To say that the beer business in Columbus is booming seems like an understatement. To see what the hoopla is about, you’ll want to embark on the Columbus Ale Trail. You’ll need a lot of time to visit the more than 50 locations, more than half of them opened in just the past five years. Visiting four breweries and getting them stamped in your Columbus Ale Trail booklet will earn you swag 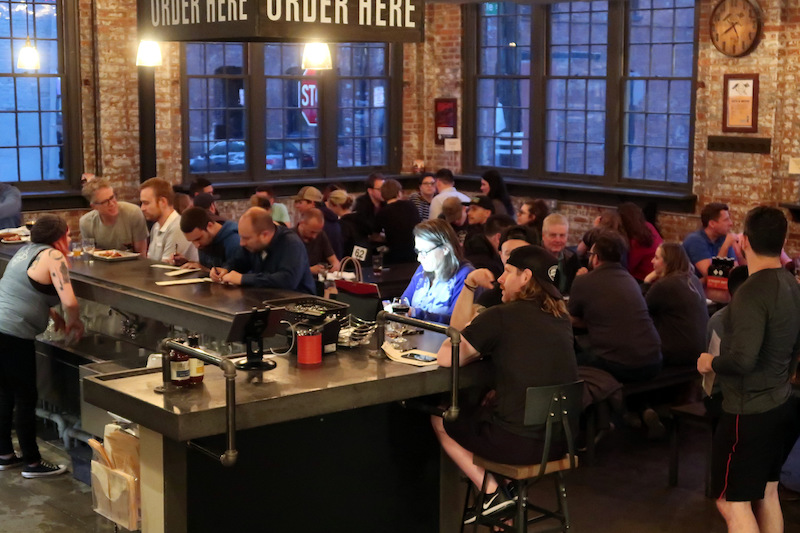 The taproom at Wolf’s Ridge Brewing

In addition to Antiques on High and Rockmill Tavern and Brewery, above, you might try Wolf’s Ridge Brewing. Opened by a father-and-son team in 2013, it offers 20 beers on tap in its taproom. Innovative American cuisine is served in its airy dining room with a vertical garden. Long wooden tables, reminiscent of those in German beer halls, encourage camaraderie. The kitchen uses locally grown food and pasture-raised animals whenever possible on the changing menu. Grass-fed duck is always on offer as is pan-seared duck breast served with smoked beet gel, roasted sunchokes, sunchoke puree, hazelnuts, and nasturtium leaves. 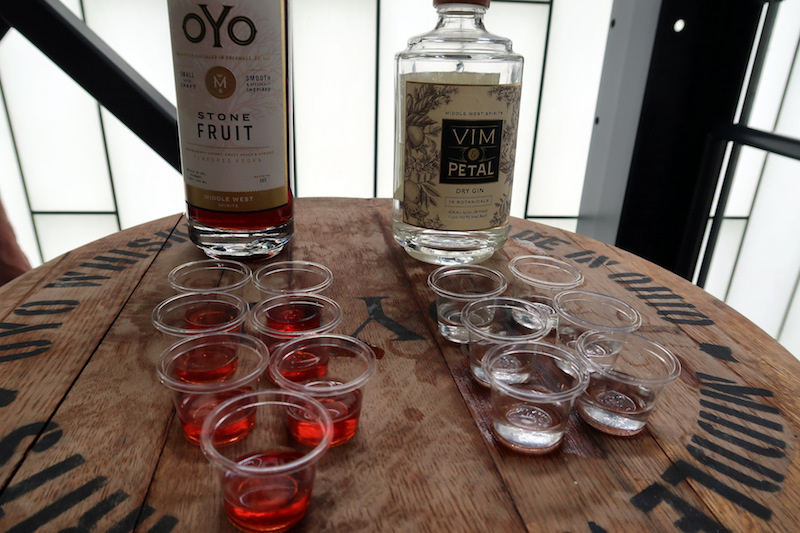 Middle West Spirits offers tours and sampling at its distillery

Watershed Distillery is also one of Columbus’ major players. It produced the first bottle of its flagship Four Peel, made with orange, grapefruit, lemon and lime peels, in 2010. Other spirits include gin aged in bourbon barrels, double-distilled, small-batch bourbon aged in charred American oak, apple brandy, and vodka made from locally produced corn and apples. You can book a tour or have a meal in its Kitchen & Bar, located right in the distillery’s production facility. 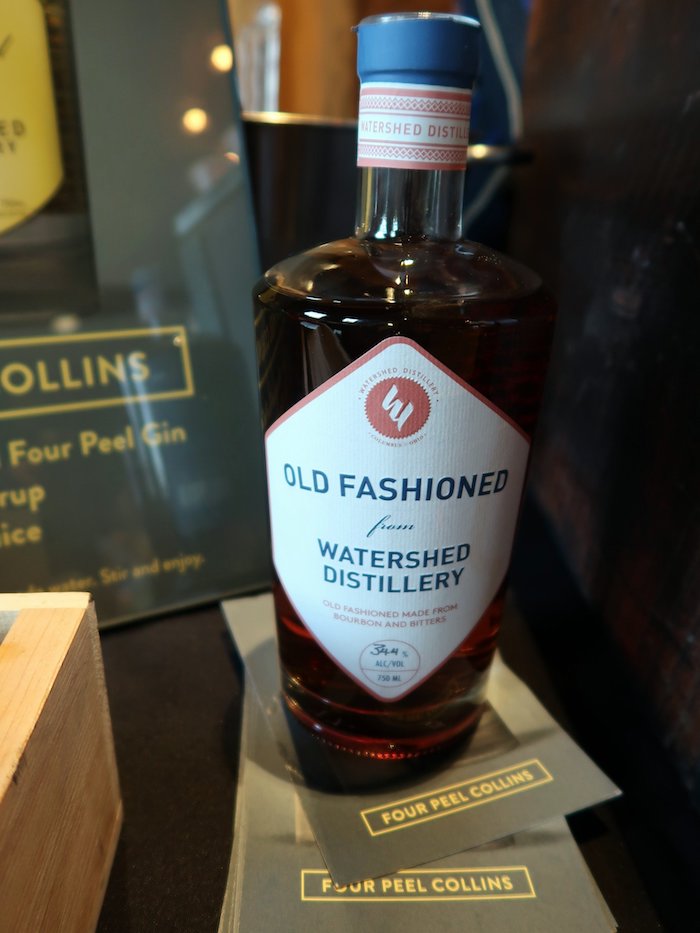 And what, you might ask, is mead? It’s one of the world’s most ancient alcoholic drinks, with more than 50 percent of its sugar content coming from honey. That makes bees the primary player, and this meadery uses mostly wildflower honey from Ohio. Its flagship bottle is Wild Ohio, made with wildflower honey and white wine yeast, giving it a semi-dry taste that’s not sweet but rather surprisingly more like wine. Other meads include those made with Ohio apples, granny smith apples, blueberries, and other fruit.

If by now you’ve figured out that you must devote more than a day or two to Columbus, you’ve got that right. And if you think you just might move there, you’re not alone. The greater Columbus metropolitan area, which now stands at about 2.3 million, is expected to add another million residents in the next 20 years.

Disclosure: The author’s Columbus food and drink experience was subsidized by Experience Columbus as part of a travel writers’ conference. 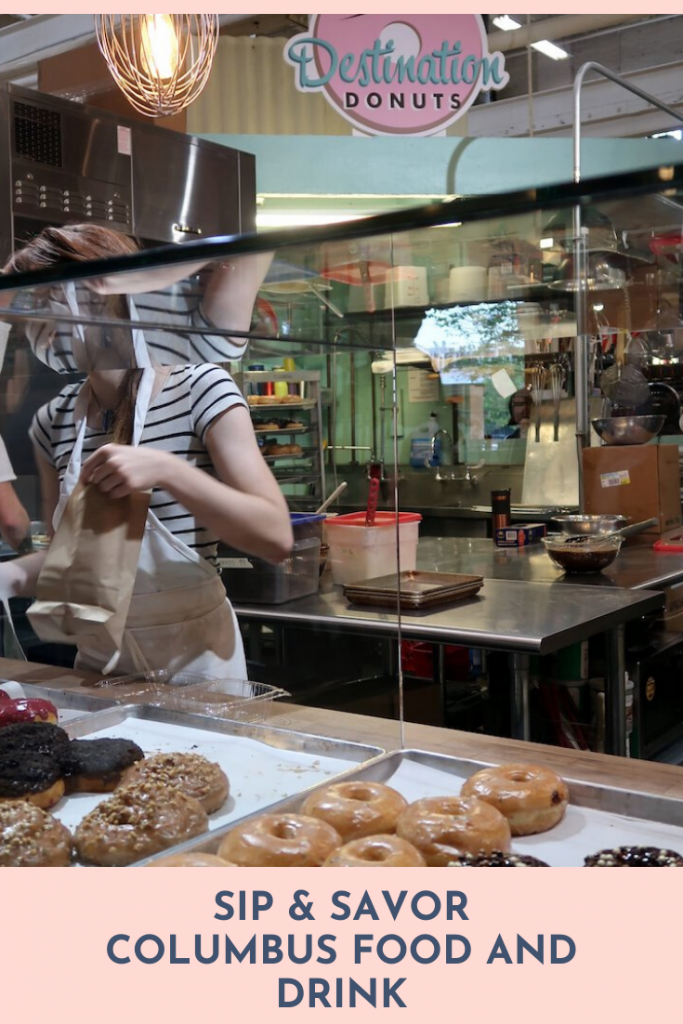