Coffee House Culture in Vienna: How to order coffee in Vienna—without embarrassing yourself

When it comes to coffee house culture in Vienna, knowing the difference between Kleiner Brauner and Kleiner Schwarzer can make or break a visit to one of these traditional cafés. Or so I learned.

As tourist gaffes go, it was a classic. And one that shouldn’t have happened because I thought I’d prepared myself.

I had carved out an afternoon on my third day in Vienna, the historic Austrian city of palaces, concert halls and centuries-old coffeehouses, to while away a few hours in a traditional Viennese café. I chose one of the most historic: Café Centrale. With the help of Google Translate, I primed myself to emulate a sophisticated traveler so I could order in the language of the destination: German.

I had even researched the various styles of coffee, of which there are at least a dozen. I was ready to go when the white-aproned server approached my table: “Ich möchte einen Kleiner Brauner bestellen, danke,“ I said.

Seemingly pleased with my tourist attempt at the local lingo, the stalwart-looking waiter smiled: “Of course, sir. An espresso with a jug of milk on the side. Excellent.”

Whatever good impression I had made with my language skills evaporated like steam above a freshly-brewed latte. Mug! Why did I have to say “mug” in an elegant, marble-floored Viennese café whose past patrons included the likes of Sigmund Freud and Marlene Dietrich? How gauche of me to utter “mug” while the classical sounds of Schubert wafted through the stylish café which has been serving coffee-lovers since 1876?

Would I accept an invitation to Afternoon Tea at Buckingham Palace and ask, “Oh, no tea for me, Yer Majesty. But if you have a Diet Coke rattling around in the back of your fridge, I’ll have that instead.”

“Oh, of course, not in a mug,” I spluttered, trying to recover from my gaffe. “Just a regular cup will be fine.” Apart from wincing involuntarily, the waiter maintained his composure. I turned 50 shades of red. 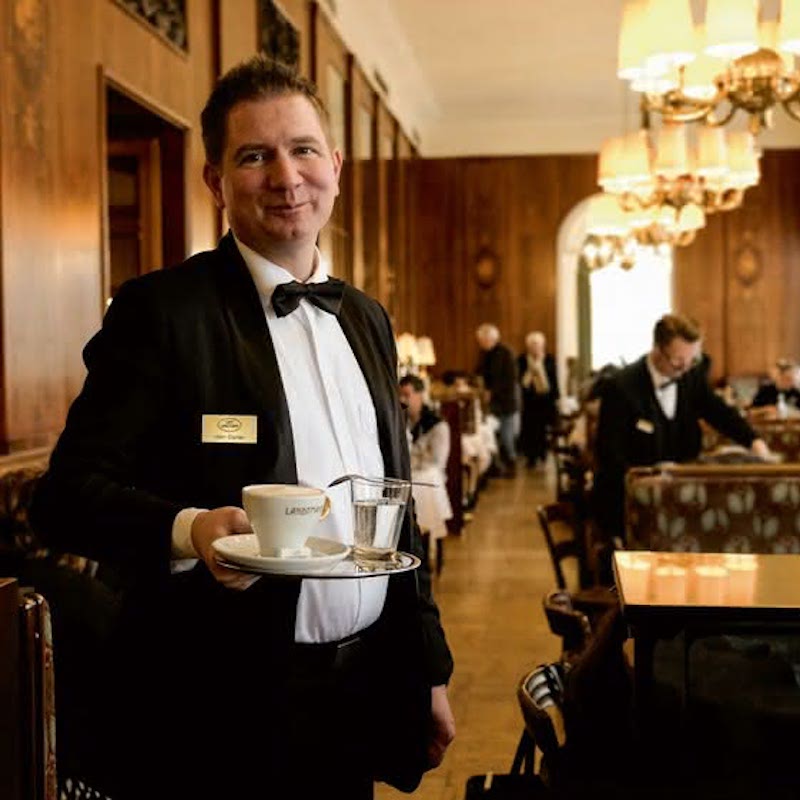 Waiters in Vienna coffeehouses are, by tradition, addressed as Herr Ober, such as this formally attired server in Café Landtmann, which has been serving up coffee and sweets since 1873.

Coffeehouses have been part of the cultural and social fabric of Vienna as far back as the 16th century, when the Turks tried to conquer the city during the Siege of Vienna. The Austrians eventually sent the invaders packing and then promptly took a liking to the coffee beans left behind by the Turks. The first coffee house opened in Vienna over 300 years ago. At times there have been no fewer than 600 cafes in the Austrian capital.

The Viennese have always flocked to the coffeehouses to socialize, debate, think, read, write and discuss matters of great importance— or just to gossip.

Cafes have long been meeting spots for artists, intellectuals, politicians, journalists and rabble-rousers. Noted figures like Sigmund Freud and Leon Trotsky reportedly wrote entire drafts of their books in Viennese coffeehouses. It wasn’t unheard of to walk into a coffeehouse off Stephansplatz square and find Mozart, Straub or Beethoven giving a performance.

A true reflection of the importance of cafes to the cultural and social scene of Vienna: Emperor Franz Josef attended the opening of Café Korb in 1904. It’s still thriving today, athough the décor has changed. In 2011, UNESCO added Viennese Coffee House culture to the “intangible cultural heritage list” for Vienna.

Know the many styles of coffee 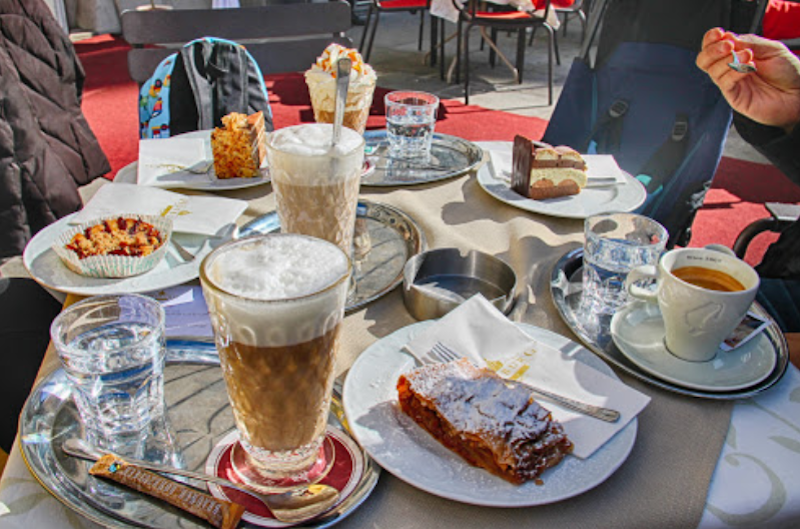 Café Hofburg, located in the Imperial Palace, serves about a dozen styles of coffee, and there’s a pastry to match every coffee-of-choice. (Courtesy: Tourism Wien)

It’s futile to simply order “a coffee” in a Viennese coffeehouse.

If you’d like a single espresso, request a Kleiner Schwarzer. For a double, it’s Großer Schwarzer. If, like me, you prefer a small container of milk (or cream) with that espresso, ask for a Kleiner Brauner or Großer Brauner.

A local favourite is Wiener Melange, which is one shot of espresso and a splash of hot water topped with foamy milk. A Verlängerter is essentially espresso diluted with hot water, while espresso topped with whipped cream is called an Einspänner.

Look for a coffee-house that lists Mozart Coffee on the menu. It’s a double espresso topped with whipped cream and a small sherry brandy on the side. Cappuccino in Vienna typically has whipped cream. If you fancy something cold at the height of summer, ask for Wiener Eiskaffee. This Viennese version of iced coffee is essentially a copious amount of vanilla ice cream covered with cold milk and drizzled with two brewed espressos (best consumed with spoon and straw.) Another version of iced coffee is Mazagran, which is a strong black coffee served with ice, a shot of rum and a bit of sugar. 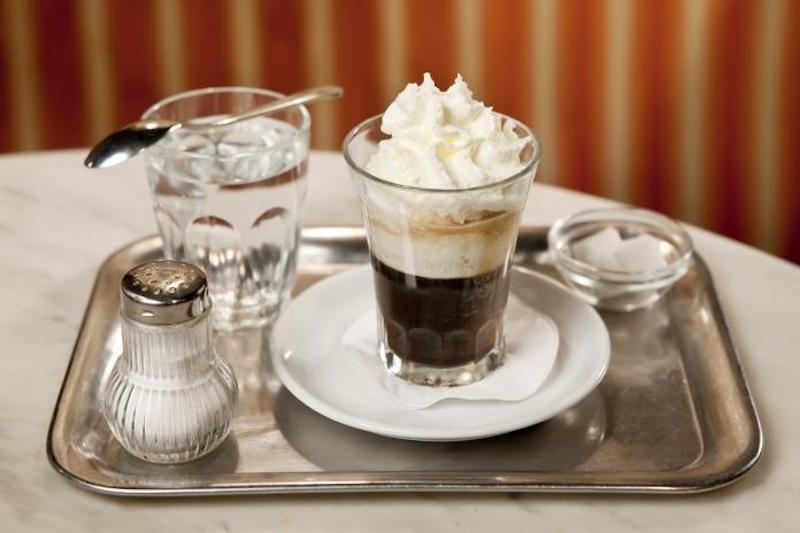 Coffeehouse etiquette is respected throughout Vienna. Patrons are always served a glass of water with every coffee, and silver trays are de rigueur. (Courtesy Café Hawelka)

A “Brew’s Who” of Vienna coffee houses

There’s a coffeehouse in Vienna for every taste, budget—and mood!

Café Central has been satisfying patrons (Leon Trotsky and Sigmund Freud, among them) since 1876. In addition to the excellent brewed coffee, the high-ceilinged palatial establishment is also a popular choice for lunch. I can vouch for the schnitzel. Bonus: there’s live music in the evening.

Café Centrale is palatial. Despite its formal ambiance, patrons are never rushed. Back in the day, Sigmund Freud and Leon Trotsky were frequent patrons. (Courtesy Café Central)

Café Landtmann, which opened its doors in 1873, has an ideal location right in the heart of Vienna on the Ringstrasse. The café is located on the ground floor of the Palais Lieben-Auspitz, close to the Burgtheater, the University of Vienna, the Town Hall and the Federal Chancellery.

It’s what I’d call a “Grand Café of the Old Order.” It feels stately but don’t worry, lively conversation abounds. Marlene Dietrich, Paul McCartney and Hillary Clinton have spent time here. A favourite on the coffee menu: Mokka gespritzt, which includes your choice of cognac, grappa, Bailey’s or whisky. They also serve a Turkish coffee not meant for the tender-hearted.

If you want to start your day with a coffeehouse breakfast, Café Imperial will more than satisfy—and not just because it opens at 7 a.m. The stately establishment serves an Imperial Breakfast that patrons can linger over with a newspaper. (The croissants are buttery perfection.)

The coffeehouse hosts Saturday Night Jazz, ideal to sample its dinner menu, and Sunday Afternoon High Tea, which is hosted in the elegant lobby with harp music in the background (Book ahead). 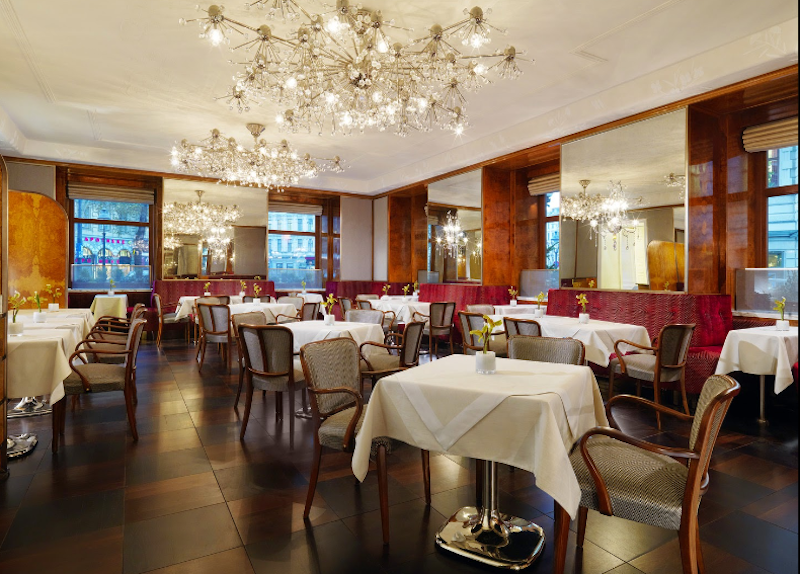 As tempting as the food and coffee concoctions are in classic Viennese coffeehouses, don’t forget to look up. The chandeliers, many of them decades old, are absolutely stunning. (Courtesy Café Imperial)

This time-honoured Vienna coffee house isn’t elegant. No chintz-and-chandelier décor here but it’s the real deal. Well-worn floors and table-tops that have seen a bit of traffic create an ambiance that will catapult you back to the post-World War II years.

Café Hawelka has been family-owned since 1939. Here you’ll find lots of grad students working away at small tables and a relaxed vibe. Order the house specialty called Buchteln, a jam-filled Austrian yeast bun, to go with your melange (a close cousin to a cappuccino). You can have your pick of international newspapers. 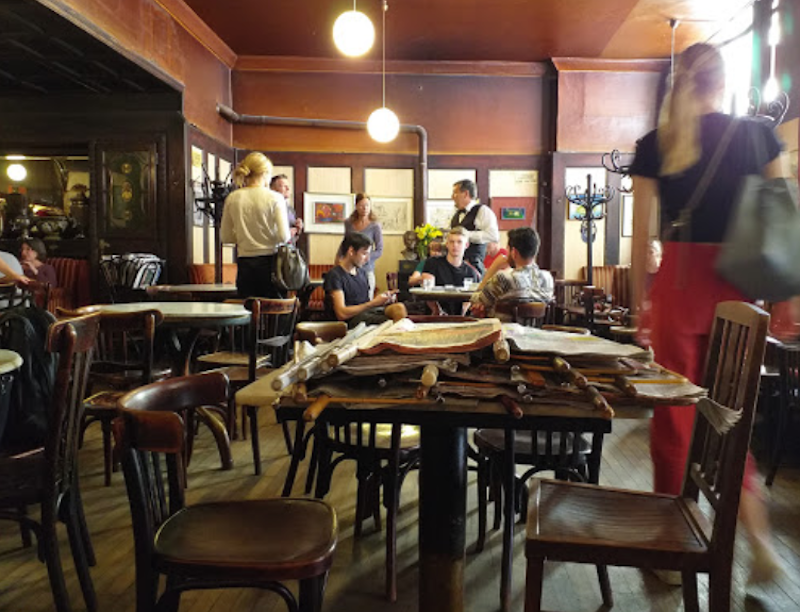 A common fixture in many Viennese coffeehouses, such as Café Hawelka, are “newspaper sticks,” which hold news dailies from around the world. Just remember to return your paper when finished. (Courtesy: Café Hawelka) 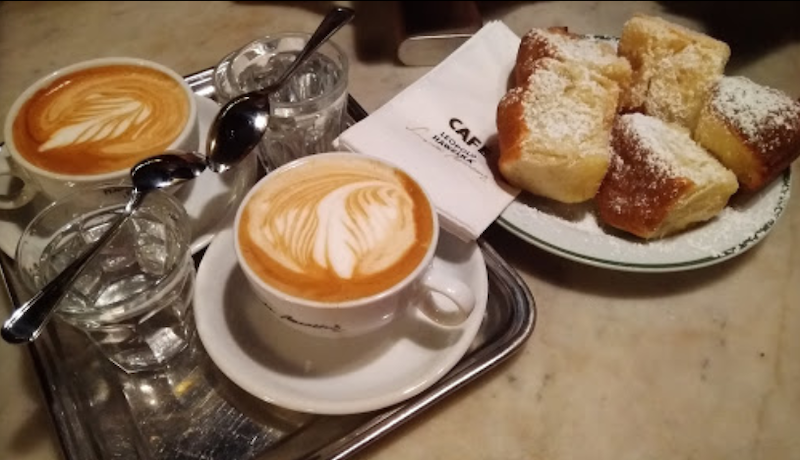 An upturned spoon atop a water glass means there’s no immediate need for a refill. Visitors to Vienna learn such subtle nuances upon their second, third or fourth coffeehouse visit. (Courtesy: Café Hawelka)

The café is part of the internationally known luxury property, Sacher Hotel. Sacher Café is as stunning as the high-end suites: ornate walls, glittering chandeliers and palatial corridors. But there’s another reason to come here: Original Sacher Torte, a chocolate creation that’s loved by sweet-toothed gourmands far and wide. The recipe dates back to 1832.

Desserts are ubiquitous in coffeehouses throughout Vienna, but few rival the classic chocolate Sacher Torte, which some purists insist can only be made in Vienna. (Courtesy: Hotel Sacher)

This popular coffeehouse won’t transport back to the late 1800s or early 1930s. Even though Café Pruckel opened in 1904, the ambience will root you somewhere in the 1950s: olive-green sofas, brass lamps and lots of wicker. But the coffee is authentic and is lovingly served by a black-tied waiter. MAK Museum of Applied Arts and Contemporary Art is a few yards away so expect an arty crowd. I found it less busy in late afternoon. 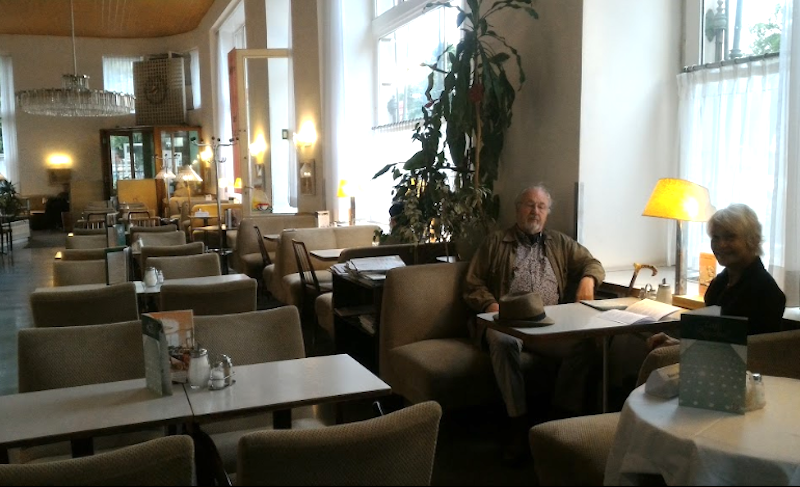 Café Frauenhuber is the oldest coffeehouse in Vienna. In fact, Mozart and Beethoven used to perform here. The comfortable establishment has been described as “Viennese charm meets coziness.” A Kleiner Schwarzer (more like an espresso) and a slice of strudel will cap off a day of sightseeing. (They serve tummy-filling dumplings, as well.)

To incorporate coffee and architecture, Viator offers Coffee Shops–Carriage Ride by Fiaker Wien, which stops at the Imperial Palace, the Presidential Office, Sisi Museum and the Spanish Riding School.

On Getting on Travel;

On More Time To Travel: 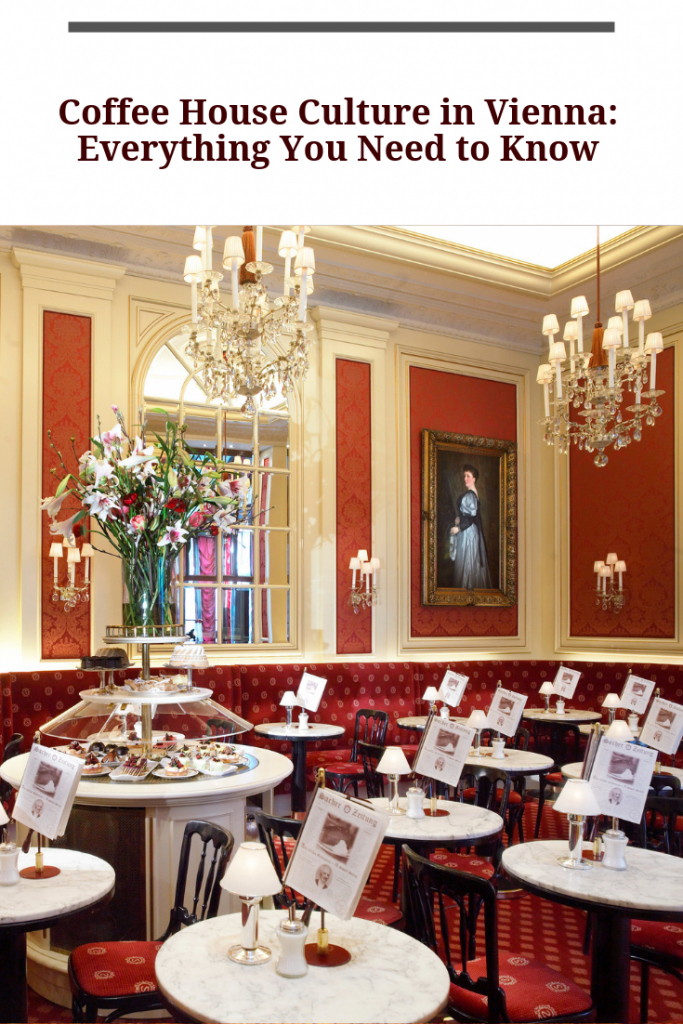