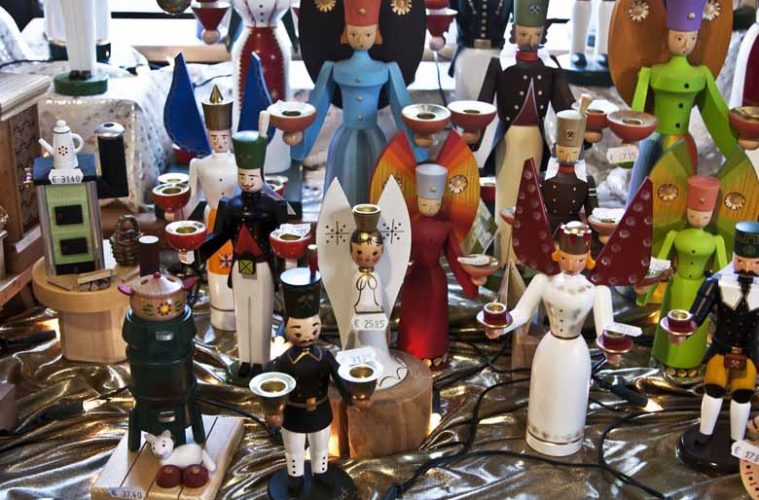 It’s Always Christmas in the Ore Mountains of Germany

Since my husband was a young lieutenant posted to Europe in the “more-years-ago-than-I want-to-admit” era, I’ve collected German Christmas tree ornaments. 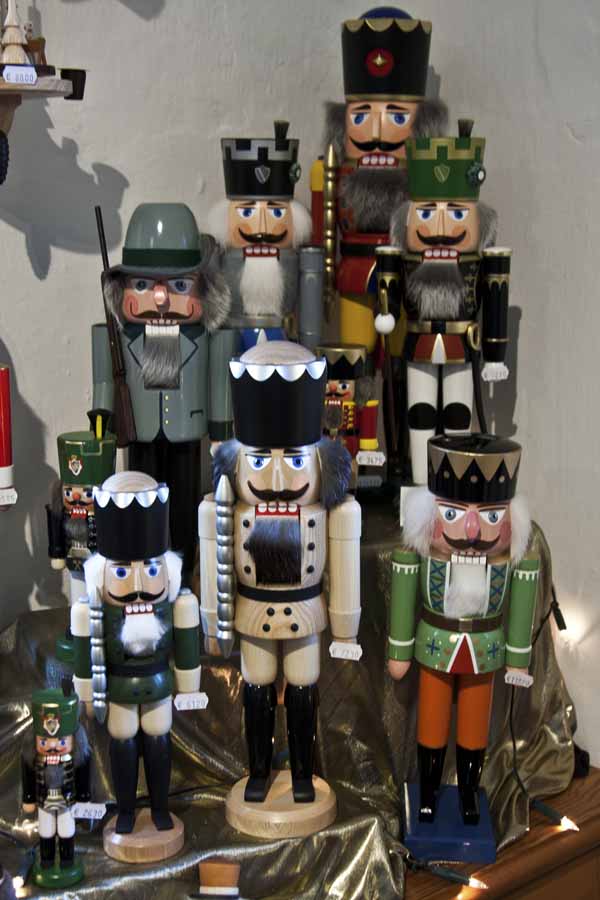 Have you ever wondered where your Christmas nutcrackers are made?

The collection grew, each trip adding more so that even after sending some off with grown children, we still need to get a ceiling-high tree to hold them.

But I never really thought about where all the ornaments came from.

I guess I pictured little elves in the Black Forest carving and painting frantically all year to stock the booths at Kristkindlmarkts in every German town. Until I traveled to Dresden this spring, I didn’t realize that almost all of them come from one tiny area of southern Saxony, the Erzgebirge, or Ore Mountains.

Turning out ornaments for Christmas in the Ore Mountains

These Christmas ornaments in the Ore Mountains aren’t made by elves – although it’s hard to think that hands larger than elves’ can paint those tiny faces.

We watched fascinated as an artist in Annaberg-Buchholz deftly flicked a hair-fine paintbrush to create the mouth of a caroling angel not an inch tall. Opposite her, a man was gluing wings on a row of tiny fellow choristers. 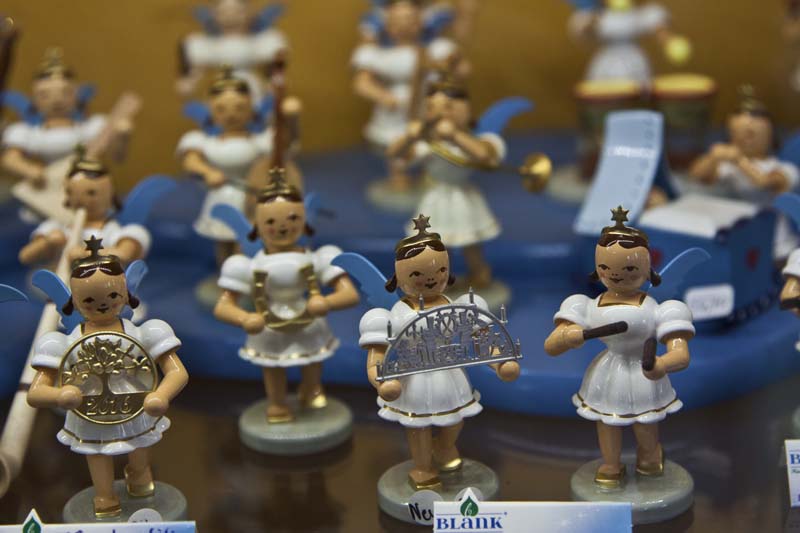 A band of angel cherubs made in the Ore Mountains

The little angels, and most of the other painted figures, are not carved, but turned.

This wood-shaping method (the same one used to make decorative chair spindles) is a specialty of Germany’s Ore Mountains. It involves spinning a long strip of wood while a cutting tool carves into it. The dowel becomes a long string of little figures, one on top of the other, that can be sliced apart. Smaller angels are made by gluing tiny round heads onto cone shapes and adding flat wings. Heads, bodies and wings are painted separately before assembling. 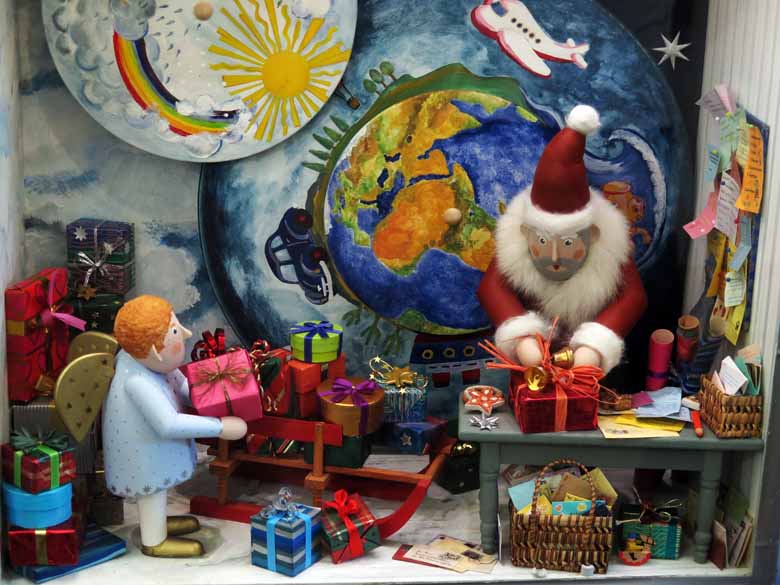 Other ornaments are made from wood, shaved to curl into the shape of Christmas trees, or carved into arches that hold a row of candles in a window. Christmas figures twirl on Erzgebirge Pyramids, carousels powered by the heat of a single candle.

If it’s made from wood and radiates seasonal cheer, it’s likely made here in the Ore Mountains. 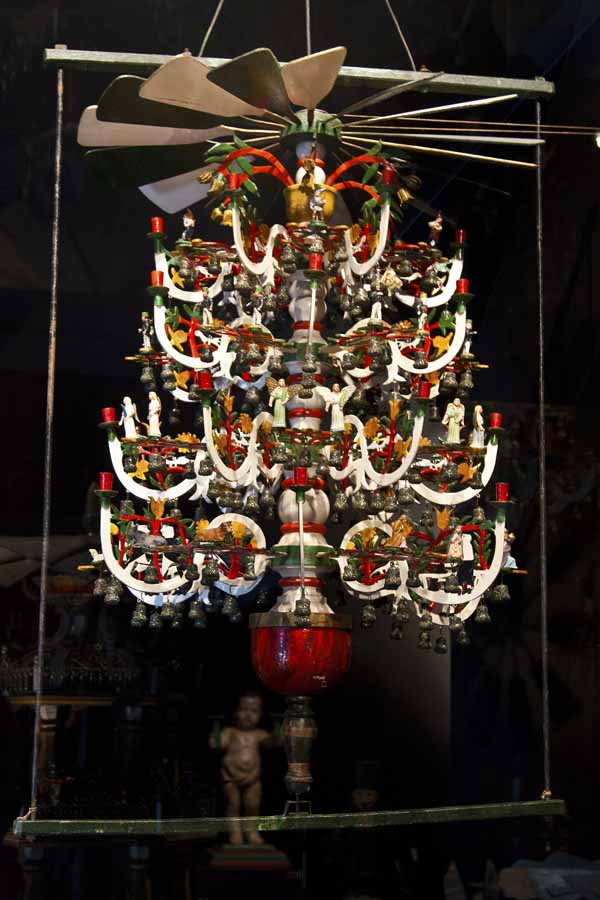 An Erzgeberger Pyramid from Annaberg-Buchholz

It began in the mines

Annaberg-Buchholz is in the heart of the Ore Mountains of Germany (called the Erzgebirge region), an area tunneled with once-rich mines.

As the mines closed, miners turned woodcarving, a favorite local pastime, into a livelihood.

We were fascinated to learn how many of the familiar decorations stemmed from mining. Twirling pyramids were inspired by horse-powered hoists that lifted ore, and candle arches mirror the shape of the wood-supported mine entrances. The original nutcrackers were not soldiers, but mine foremen, a sly reference to their treatment of miners. 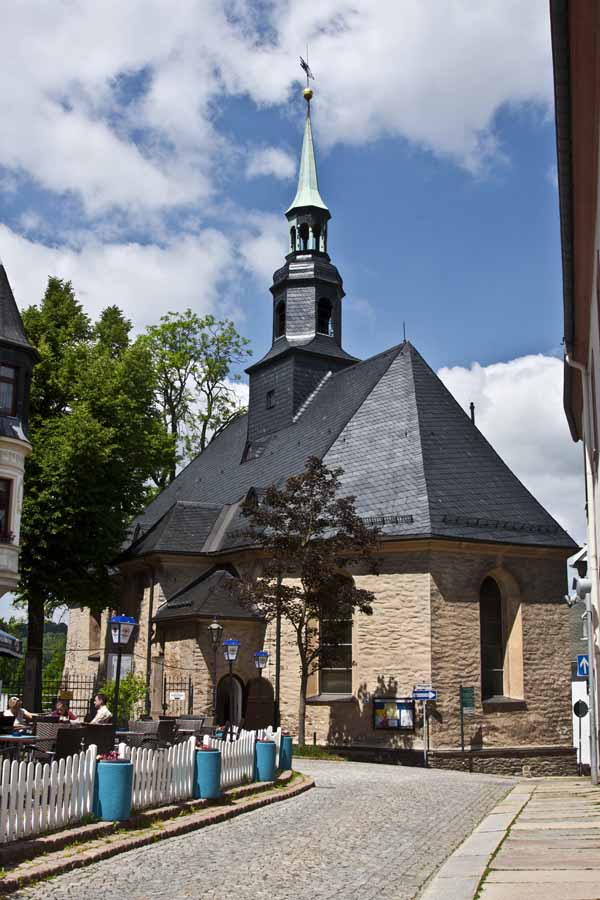 The Miner’s Church in Annaberg-Buchholz

Even before the mine closings, the region was known for the skill of its woodworkers, who built detailed models of mines and other scenes.

In the excellent Manufaktur der Träume (maker of dreams) museum in Annaberg, we saw dozens of these dioramas. Animated by water-driven cogwheels and pulleys, they show the operation of mines or move a procession of Wise Men and camels through a carved Bethlehem. More than 1,500 colorful decorations and wooden toys fill this Christmas wonderland.

We drove to Seiffen to immerse ourselves in even more Christmas-ness.

Every building in this small town, which was known for its wooden toys long before the mines closed, seems to be a Christmas shop, each more dazzling than the next. Hundreds of painted wooden figures range in size from thumbnail –sized angels to 5-foot-tall nutcrackers. Every window is decorated with a wooden candle arch and tabletop carousels twirl slowly, their tiers of painted figures parading round and round. 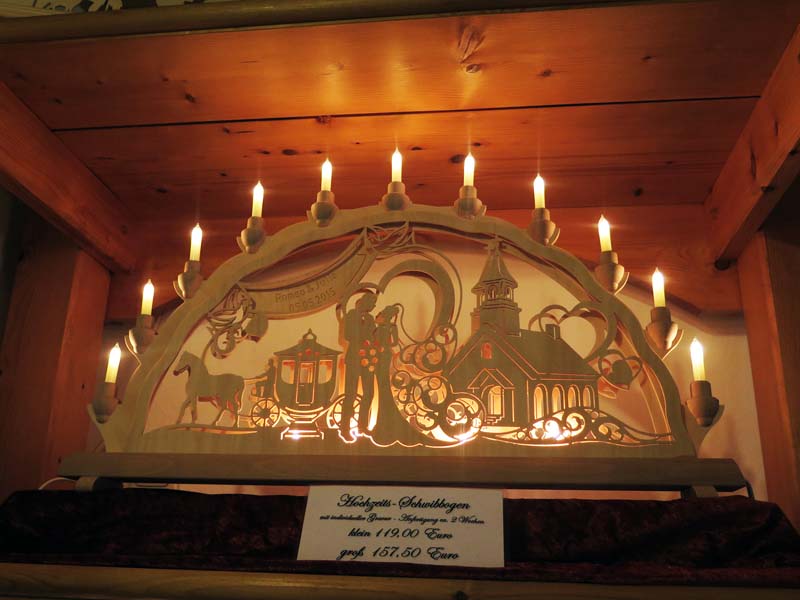 A Schwibbogen or candle arch

Seiffen’s toy museum, Spielzeugmuseum Seiffen, is another multi-galleried exposition of the local art. Its centerpiece is a 20-foot-tall wooden pyramid of painted Christmas figures (it takes more than a candle to power this one), and the museum encompasses the entire history of Seiffen toy-making. Along with holiday decorations we saw doll houses and shops, toy farms and circus wagons, matchbox rooms, a 1,000-piece Noah’s Ark set, pull toys and puzzles – right up to recent years’ winners in wood-carving competitions. 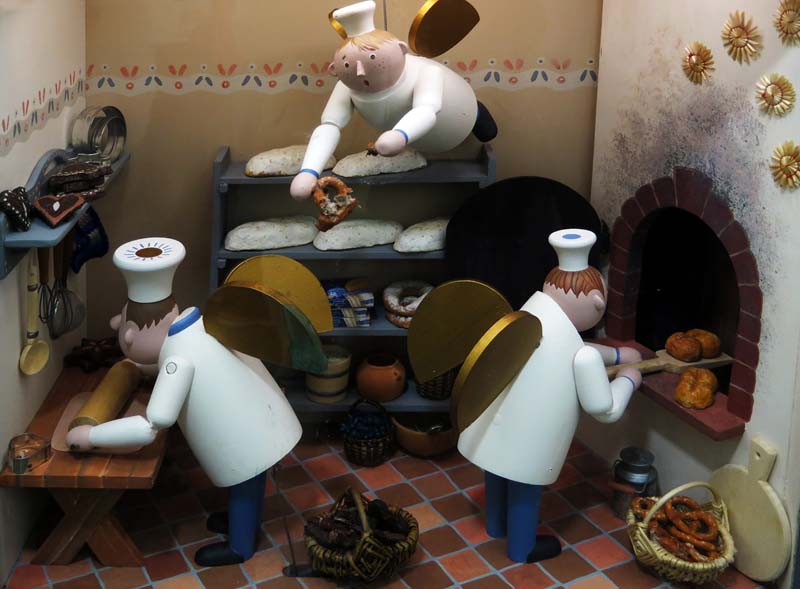 Here we learned about an even more ingenious method of woodwork called ring turning, which produces animals in quantities that would overwhelm a zoo. Invented in the Ore Mountains of Germany in the 19th century, a ring-turning lathe produces a carved ring that is then sliced crosswise into multiple flat figures in the silhouette of a cow, a lion or a pig. These forms can then be quickly carved into rounded bodies.

A rustic hotel on a wooded hillside outside of Annaberg-Buchholz looked appealing. But while driving into town and back for a choice of restaurants might appeal to younger travelers, we prefer a quiet in-town neighborhood. We like to be within walking distance of restaurants, where we can enjoy dinner with a glass (or two) of local wine, and saunter home on foot.

That, and a room on the first floor, made the small Hotel Alt Annaberg the right choice. Our English-speaking host invited us to enjoy a glass of local wine in the garden, with a view of the tower of Annaberg’s magnificent 15th-century St. Annenkirche, before we set out to find Zum Türmer, the restaurant in its shadow.

The extra space in our large room gave us plenty of room to rearrange luggage, so we could carry all the new Christmas ornaments home to the grandkids. 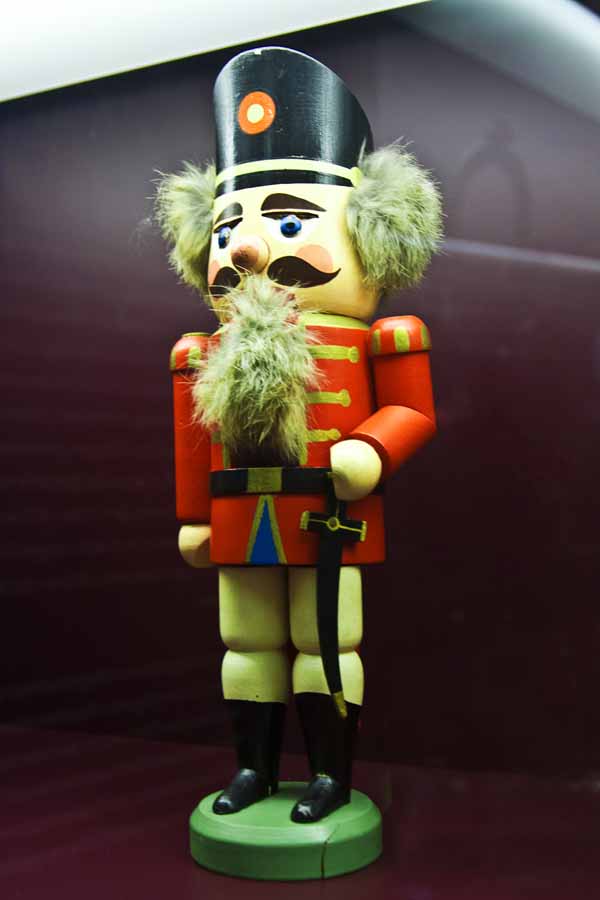 A painted wood soldier — perhaps a souvenir for the grandkids?

The author’s travel to Germany was partially hosted by Saxony Tourism. 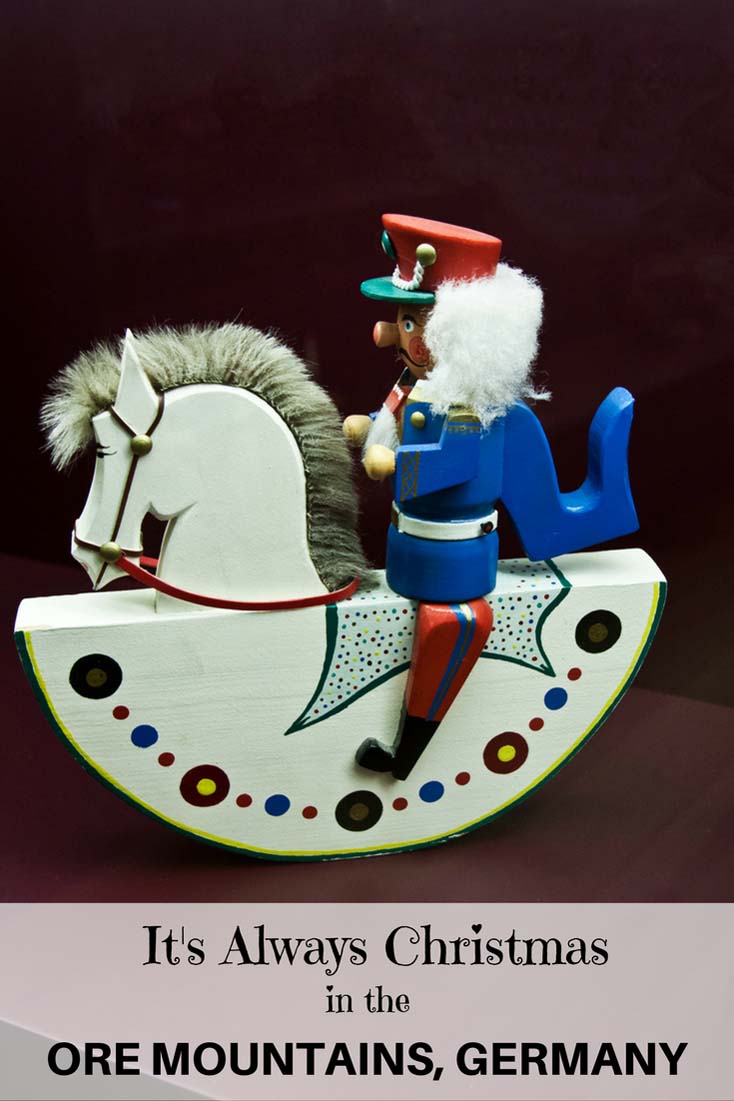