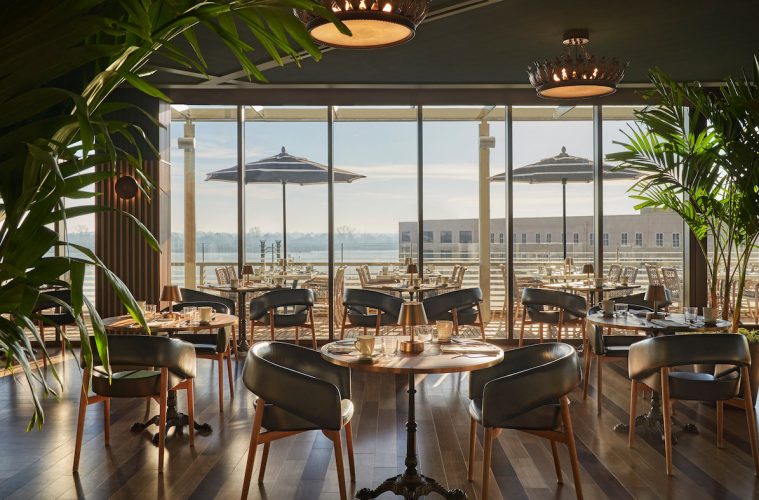 New Orleans has no shortage of high-end, celebrity chef–helmed restaurants. While some never quite live up to the hype, others become instant classics. Chemin à la Mer, the latest from local culinary hero Donald Link, fits the latter category.

Located on the fifth floor of the new 34-story Four Seasons Hotel New Orleans, Chemin à La Mer opened in December 2021. Its design exudes the ambiance of a luxe tropical club. From the glossy wood floors to the mixture of sculptural leather chairs and woven seating to the vintage-look flush-mount fixtures and the curving marble bar, it’s both thoroughly modern and of another period.

The profusion of live greenery and original wildlife art of Southern painter John Alexander gives the dining room a breezy elegance. But the best design feature is the wall of windows along the far side, giving every table a view of the Mississippi River. And, weather permitting, there’s also outdoor dining on a wraparound terrace. 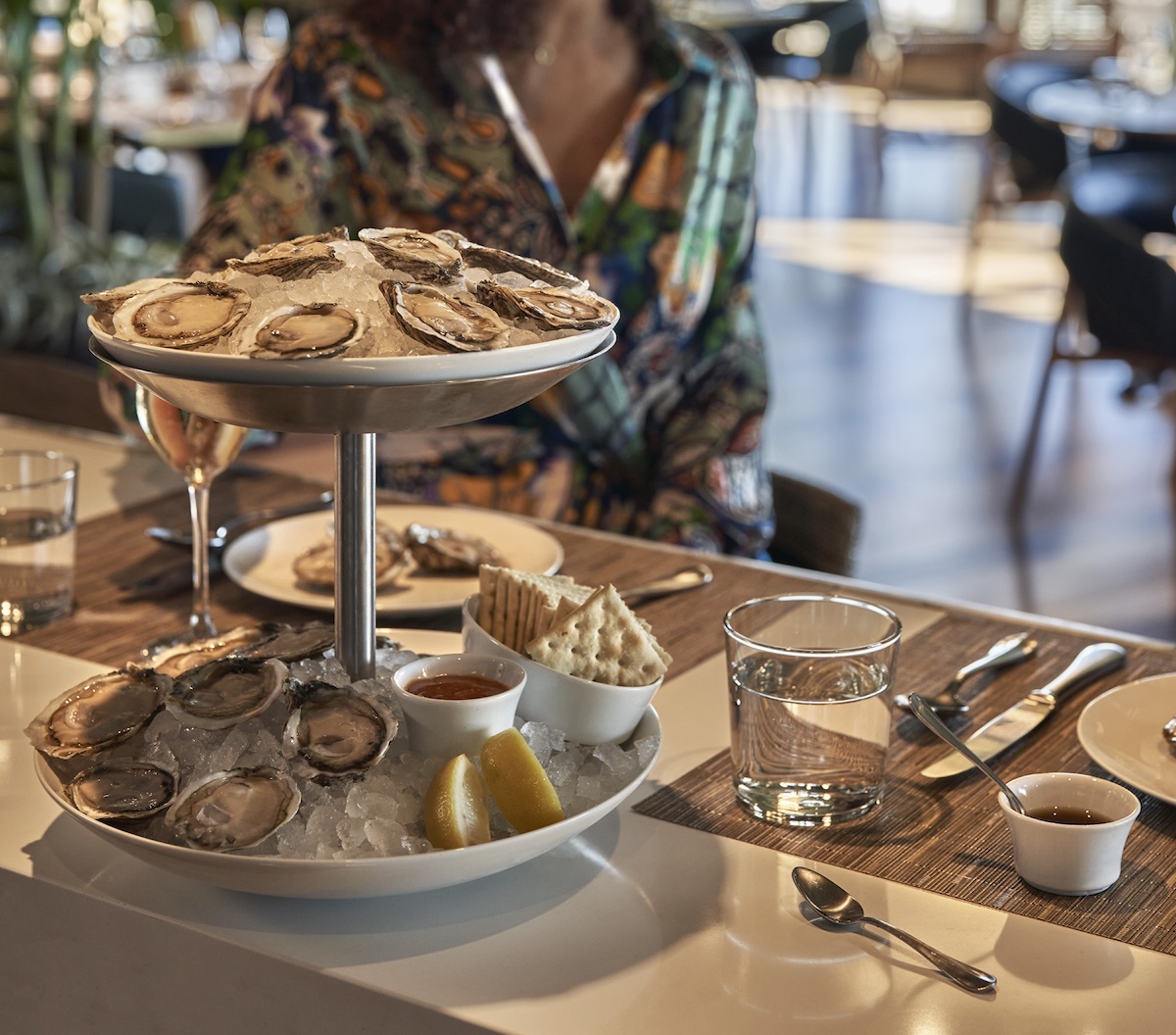 Over a two-decade-plus career, Link has become one of the Big Easy’s dining impresarios. Besides Herbsaint, his original and James Beard Award-winning eatery, his empire now includes Cochon, Cochon Butcher, Pêche, La Boulangerie, and Gianna, which opened in 2019.

Chemin à la Mer is the first venture for Link outside of his namesake Link Restaurant Group and his first in a hotel. Here he again calls on the Cajun and Southern influences of his childhood. His menu features signature Louisiana ingredients and flavors prepared with the precision of classical French techniques. 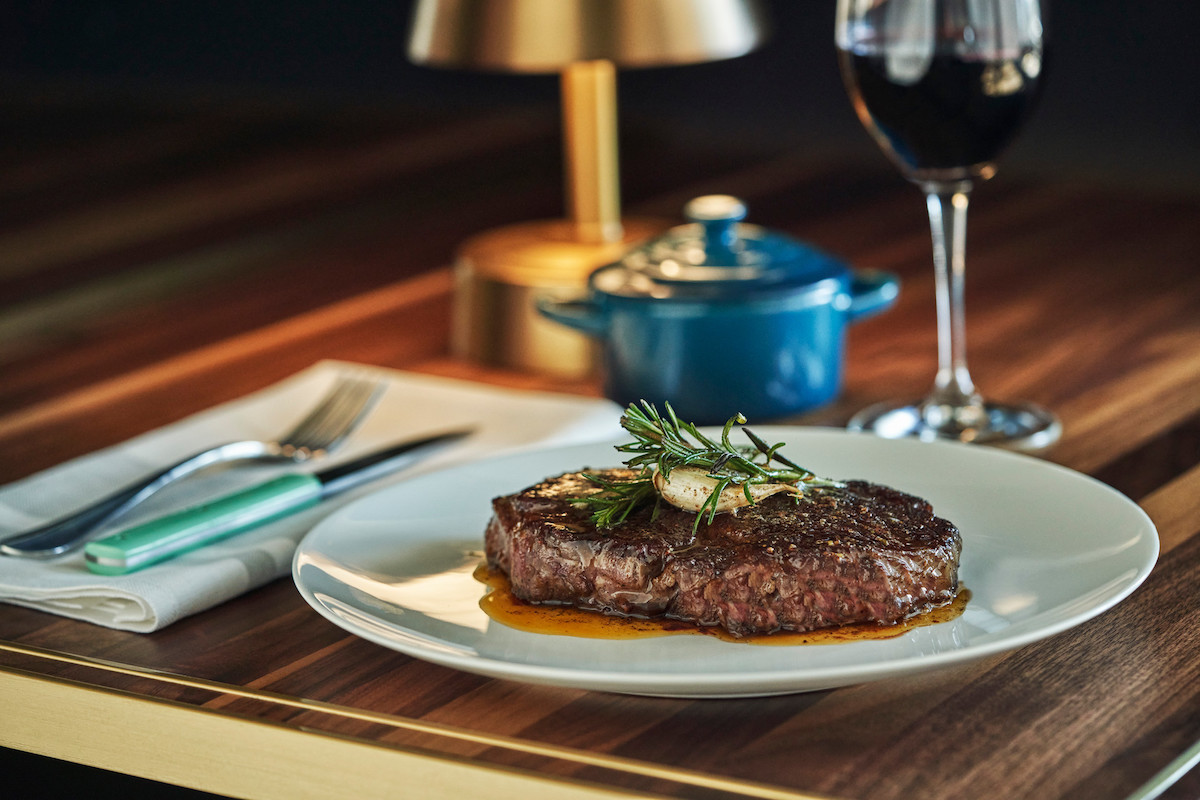 Given Link’s ability to transform steak into the stuff of foodie fantasy (I’m told the côte de boeuf, which serves two and is carved tableside, is especially decadent), it’s not surprising that plentiful meat options appear on the menu. And the kitchen crew has included several takes on New Orleans favorites. These include gumbo swimming with colossal jumbo shrimp, thickened with slow-roasted okra instead of the usual roux.

When you give your restaurant a French moniker meaning “Pathway to the Sea,” you’d better be ready to deliver. The oyster bar features Gulf Coast varieties and selections from the Atlantic and Pacific coasts. Meanwhile, the pan-roasted Ōra King salmon, served alongside Beluga lentils and piled with fresh herbs, has already been the subject of more than one fawning article.

Raison d’être for veering from vegetarian 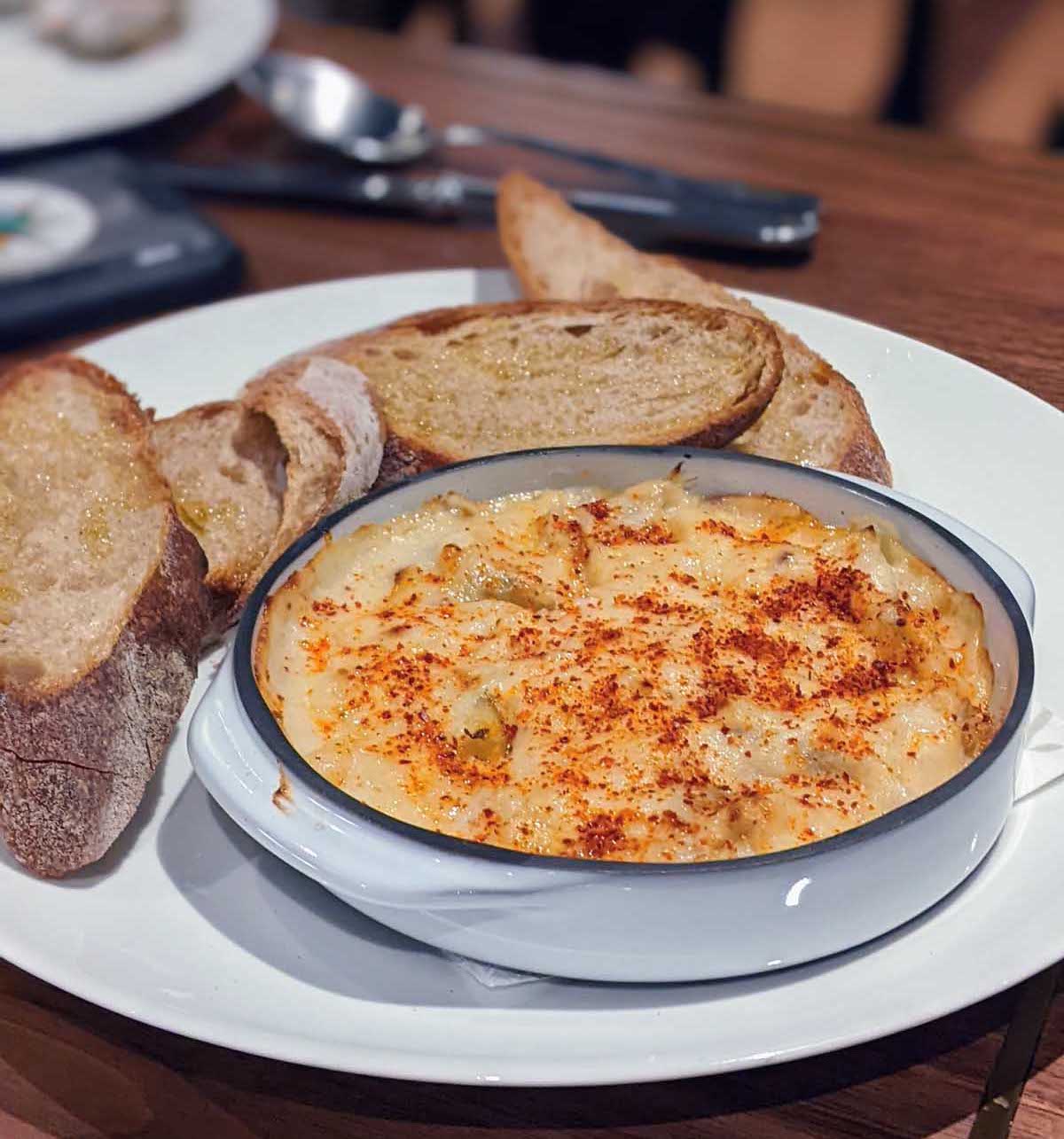 I’m a vegetarian who occasionally leans pescatarian. I’ve never developed a taste for oysters—they’ve always been a bit too gelatinous for my palate. So the oyster plate, comprising four different types from around North America, blew my expectations out of the proverbial water. My top pick: New Brunswick, delicate and mildly briny, with a hint of fruitiness.

I moved on to the gulf fish and shrimp ceviche, with hearty chunks of fish so fresh, it might as well have still been flapping around on the bottom of a boat. It was generously spiced with chile peppers and rendered refreshing with a marinade of lime, cucumber, red onion, and mint. 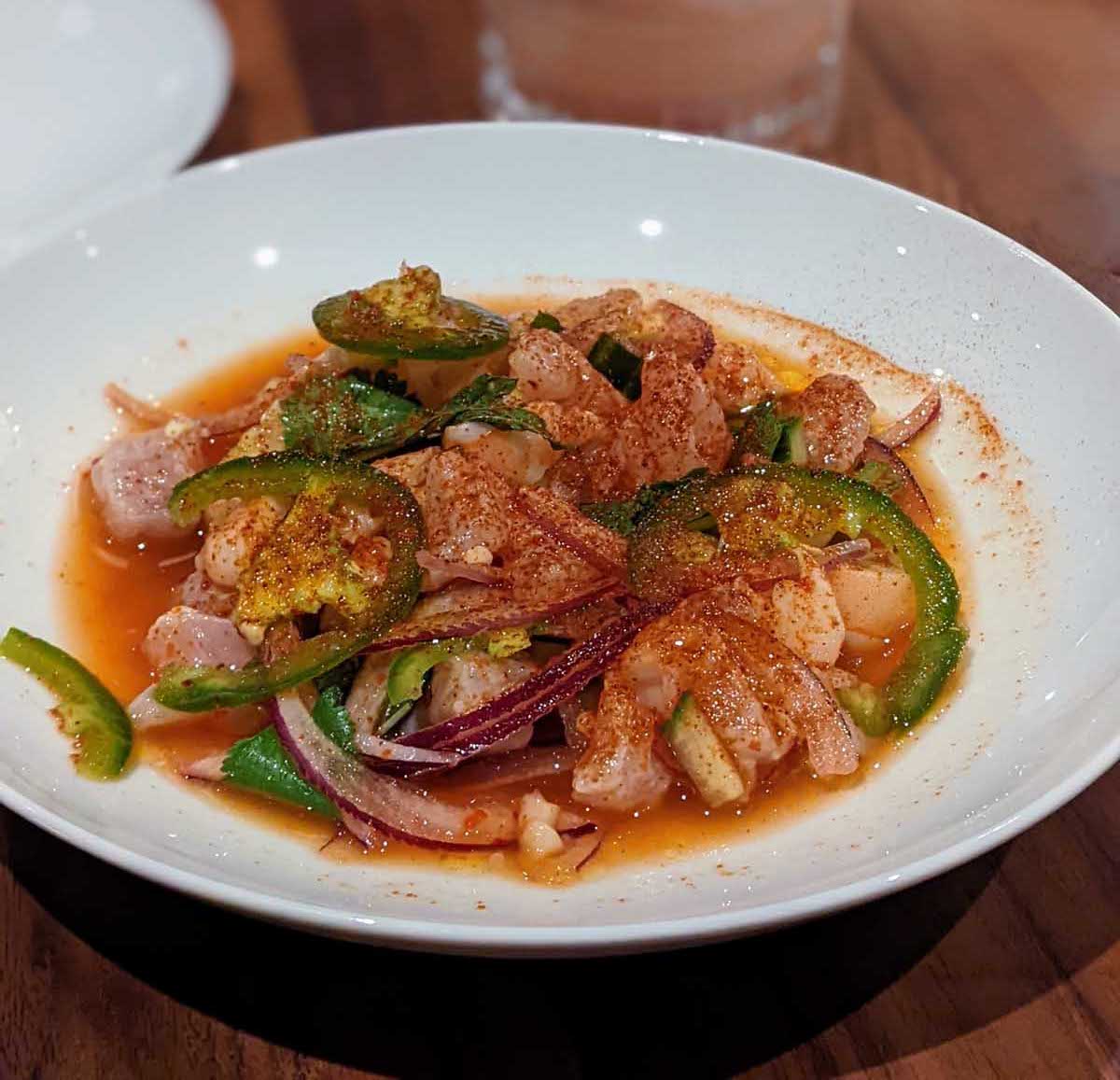 For my entrée, I went plant-based with the grits cake, a thick fried disk of the Southern staple. Deliciously creamy and cheesy, it tasted fantastic on its own. When combined with sauteed wild mushrooms and rapini in a tangy sherry vinaigrette, the dish was so flavorful and filling that I put down my fork in surrender. No kidding. I actually turned down dessert. 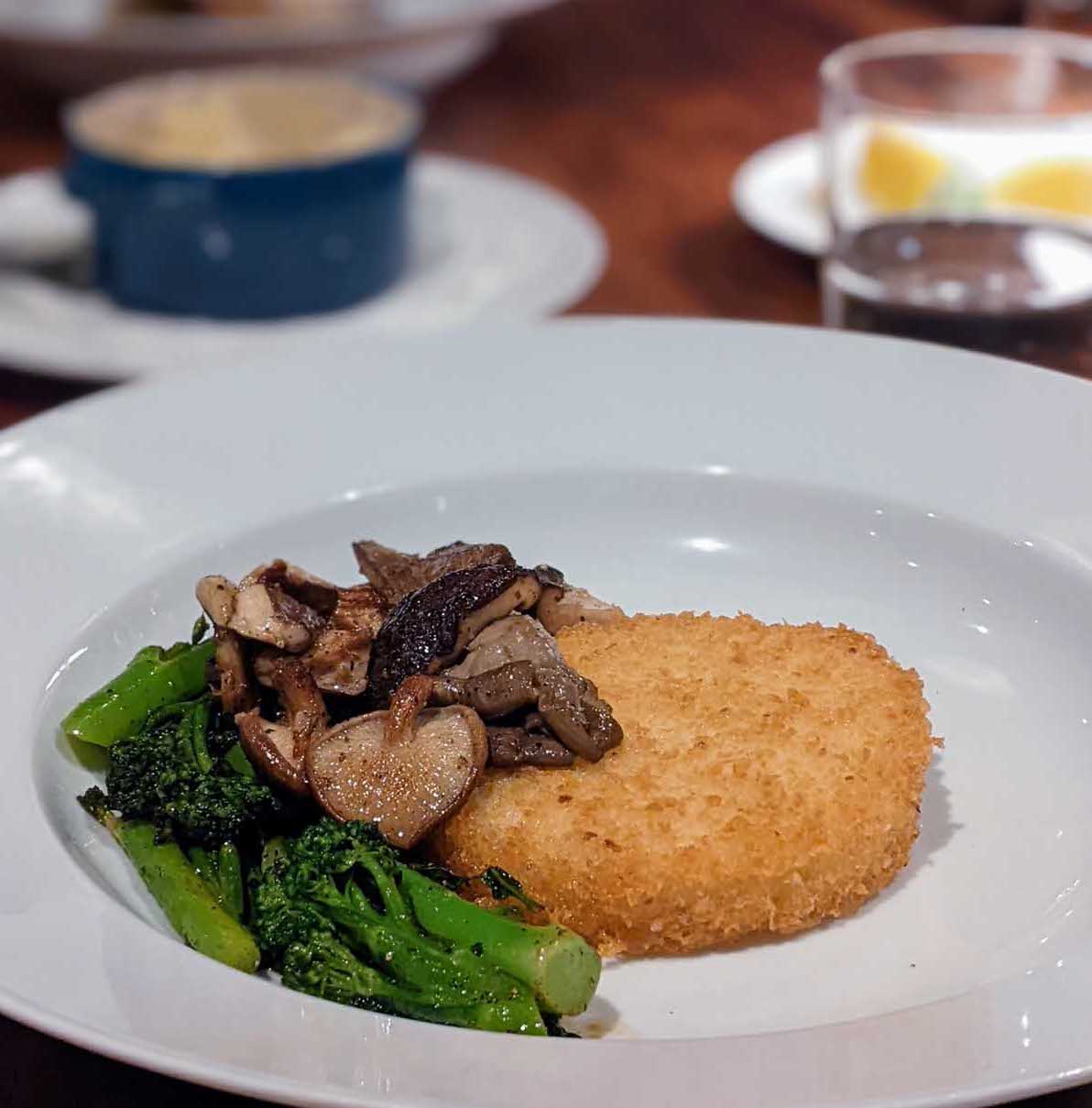 Covetous, I watched as my companions topped off their meal with chocolate mousse bombs while I nursed the rest of my cocktail—the Tug Boat, smoky mezcal blended with Rhum Agricole, Creole shrub, bitters, orgeat, lime, and coconut—and cursed myself for overeating at lunch. 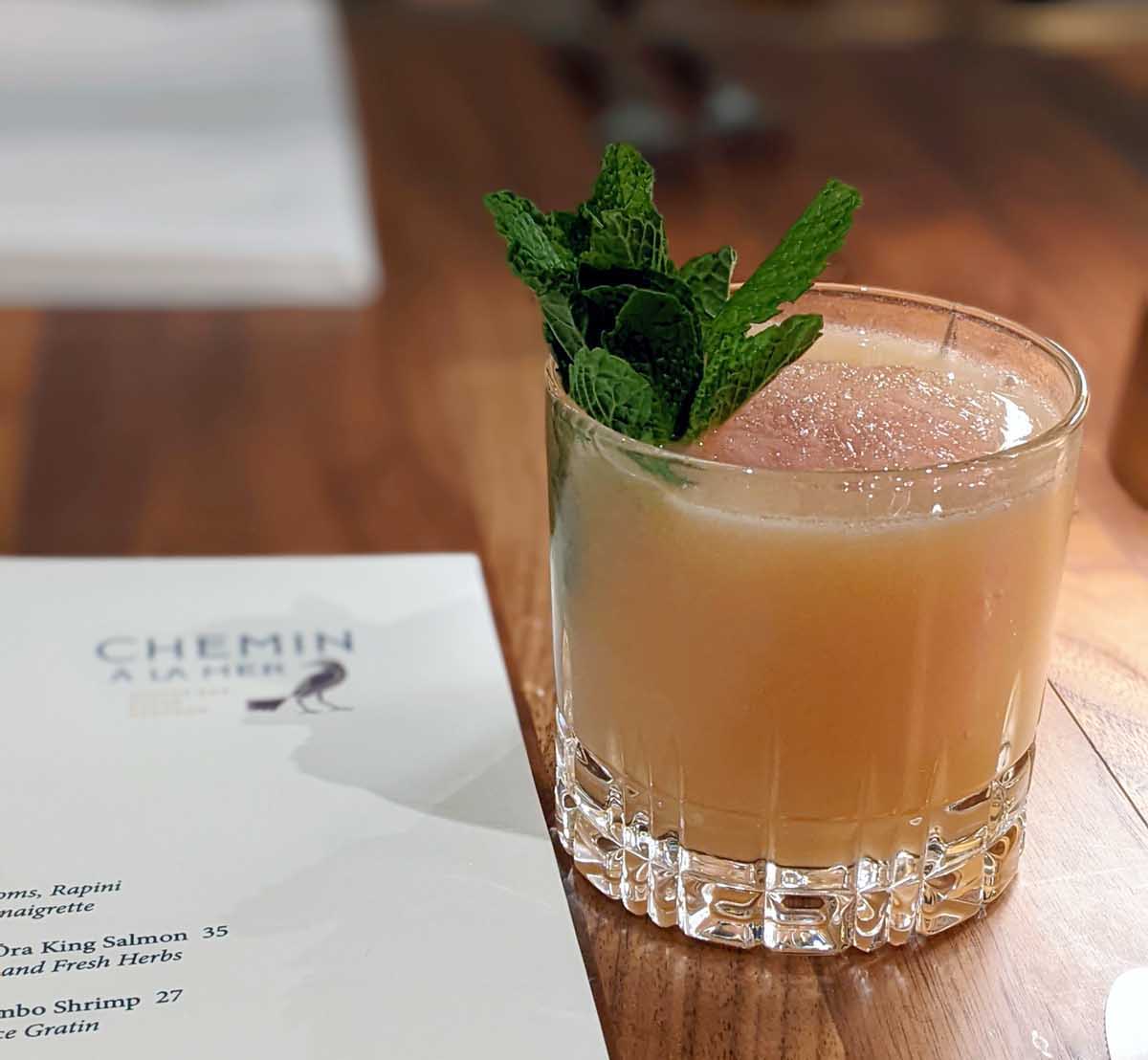 If I have the chance for a do-over at Chemin à la Mer, I’ll make sure I save plenty of room for a sweet finish.

Previously on GOT: In New Orleans, take a ride on the St. Charles Avenue Streetcar Line 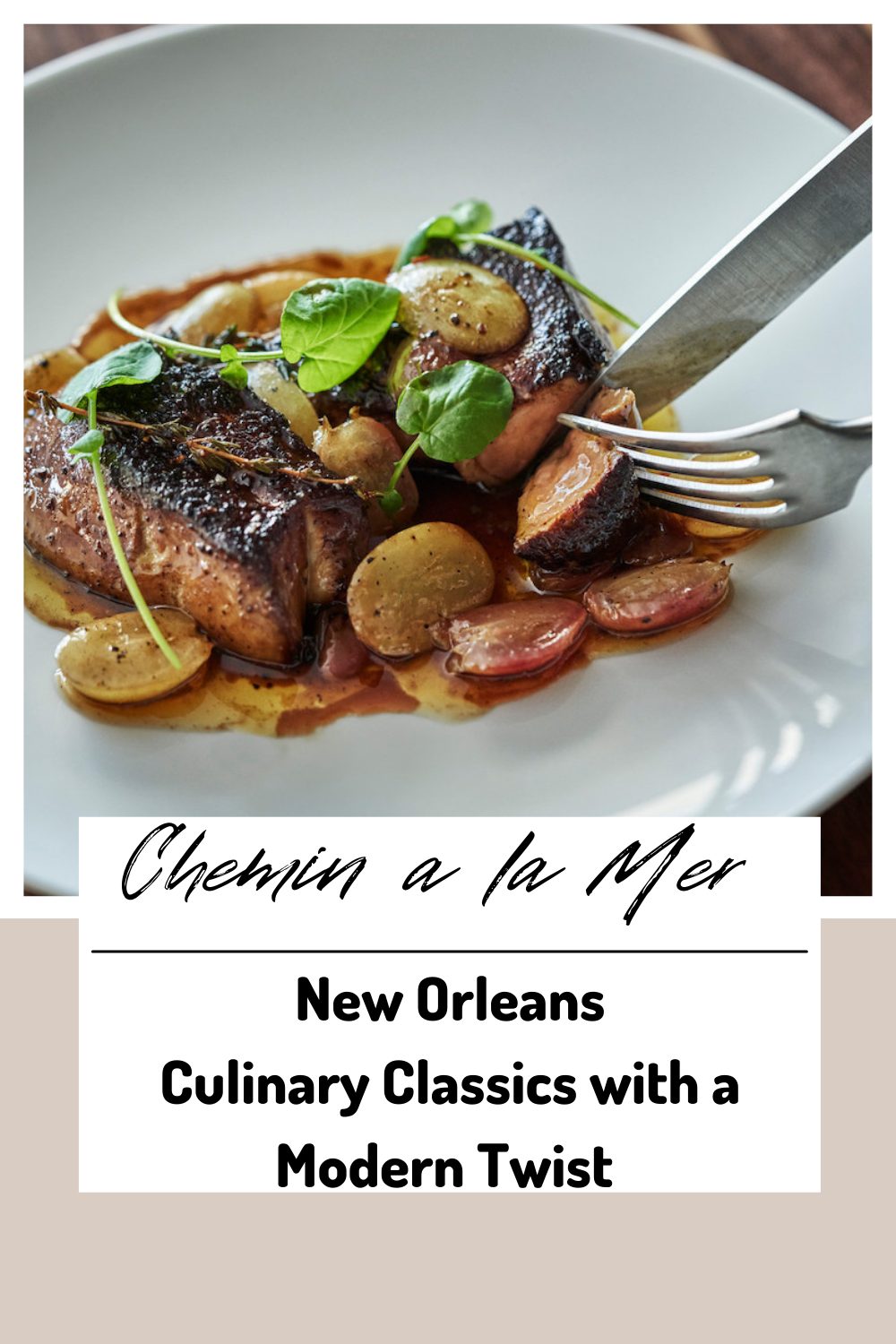