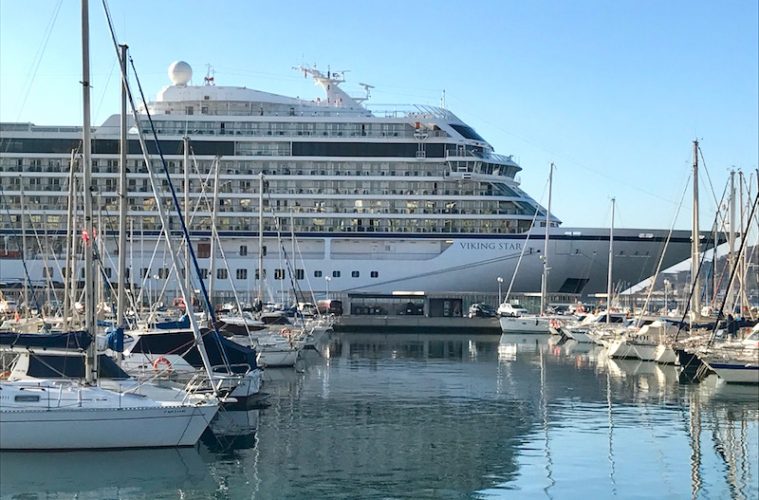 Celebrating in Style: In an Explorer Suite on the Viking Star

Having been empty nesters for almost eight years, we decided it was finally time to make a change. So with a mix of nostalgia and anticipation, we spent the good part of a year decluttering and preparing our home of 23 years for sale. Simultaneously, we purchased a smaller, soon-to-be-built townhouse in a nearby town and unexpectedly discovered along the way that the timing of the sale and purchase wouldn’t quite dovetail as planned.

Months of heavy lifting (literally and figuratively) – followed by three weeks of unanticipated temporary moves from a hotel to friend’s house to a hotel – exacted a far greater physical and emotional toll than we could have ever imagined. Foreign travel was, of course, put on hiatus.

So we couldn’t wait for our long-awaited September cruise on the Viking Star, a vacation that coincided with my birthday. All our cruise documents, including our cabin assignment, were delivered to our old home well in advance of the moving frenzy.

Our voyage began in Bergen, Norway, where the cruise line whisked us from the airport to the port with our bags pre-tagged for delivery to Cabin 4041, a penthouse stateroom on the Viking Star. 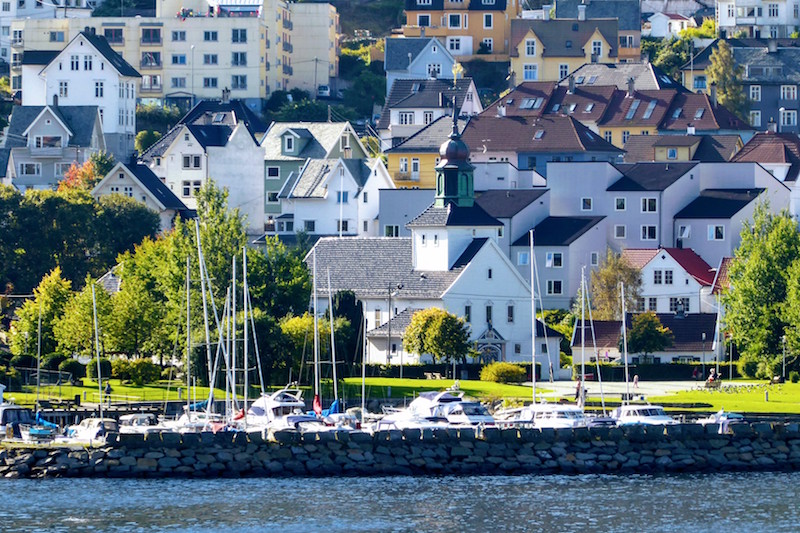 Check-in under a tent on the pier was moving quickly and efficiently. To boot, brilliant sunshine and blue skies in Bergen, where it typically rains some 231 days a year, were a very good omen!

When it was our turn to check in, we received our identification cards and were told our luggage would meet us in Cabin 3000. What?

We had never been subject to a last-minute cabin change so we suspected there had been some mix-up and worried when we would be reunited with our bags.

We showed the person at the check-in desk our luggage tags with the correct cabin number, 4041, and wondered whether we would have to dig in to our cruise documents to prove out point. We almost began to argue.

Before she – or we – could discern what happened, another officious looking woman from the cruise line approached us from behind to tell us there had indeed been a change. She would be accompanying us to our newly assigned stateroom on the third deck.

As we boarded the gangway, the crew all greeted me with whispers: “Happy Birthday.” I had almost forgotten our travel day was on my birthday. 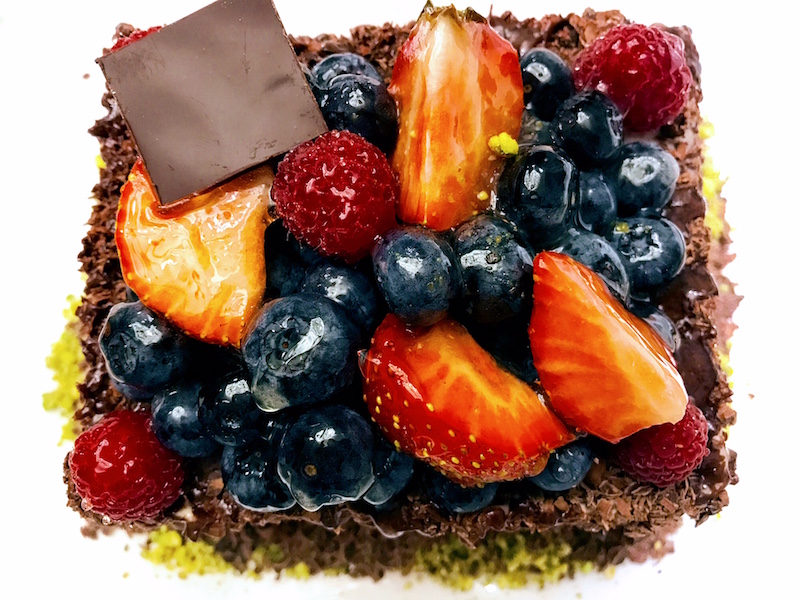 Checking into an Explorer Suite on the Viking Star

When our host used the key card to open the cabin door, our jaws dropped. We’ve been on many beautiful ships but never were upgraded to a suite. Inside, a bottle of champagne was chilling on ice. Beside it was a note welcoming us to the Viking Star, again wishing me a “Happy Birthday.”

We were both stunned at our good fortune!

We spent 15 wonderful days in our Explorer Suite on the Viking Star traveling to seven different countries. I’m convinced that if you can afford it, a splurge like this is the perfect way to celebrate any milestone birthday or anniversary in a very special way.

There are 14 Explorer Suites on the Viking Star, all of them located on the corners of the ship (on decks 3, 4, 5, 6) both at the fore and aft. Explorer Suite 3000 is located at the front with a huge balcony that offers incredible views of sea and land, and plenty of space to enjoy them.

The WOW Factor on Explorer Suites

Our accommodations were so comfortable that, if allowed to remain on board, we would have circumnavigated the globe—perhaps, twice.

Here are some of the reasons we were wowed:

Most cruise ship cabins offer “just-enough-space,“ generally about 200 square feet – give or take a few. (Relatively large cabins are closer to 300 square feet.)

Our Explorer Suite measured about 757 square feet (with the balcony included) and had an L-shaped living/dining room (with a couch, two club chairs and a desk area), and a separate bedroom and bath. We felt like we were wrapped in windows with sweeping views on two sides. 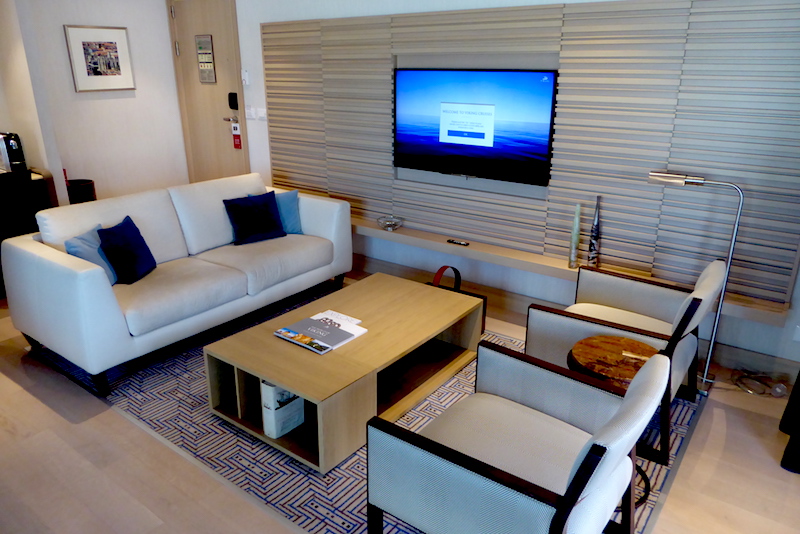 Our living room on the Viking Star (Credit: Jerome Levine) 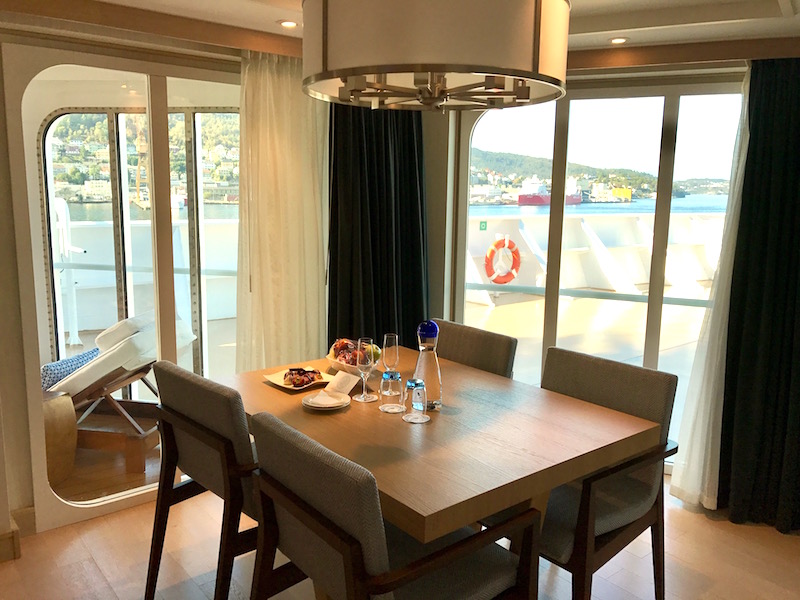 The bathroom (described further below) was a suite in itself with a cavernous, well-lit walk-in closet with a dressing table at the end (a perfect place to blow your hair with three-sided mirrors that allow you to see the back of your head). An eye-level safe was conveniently placed on one side of the closet offering easy access. 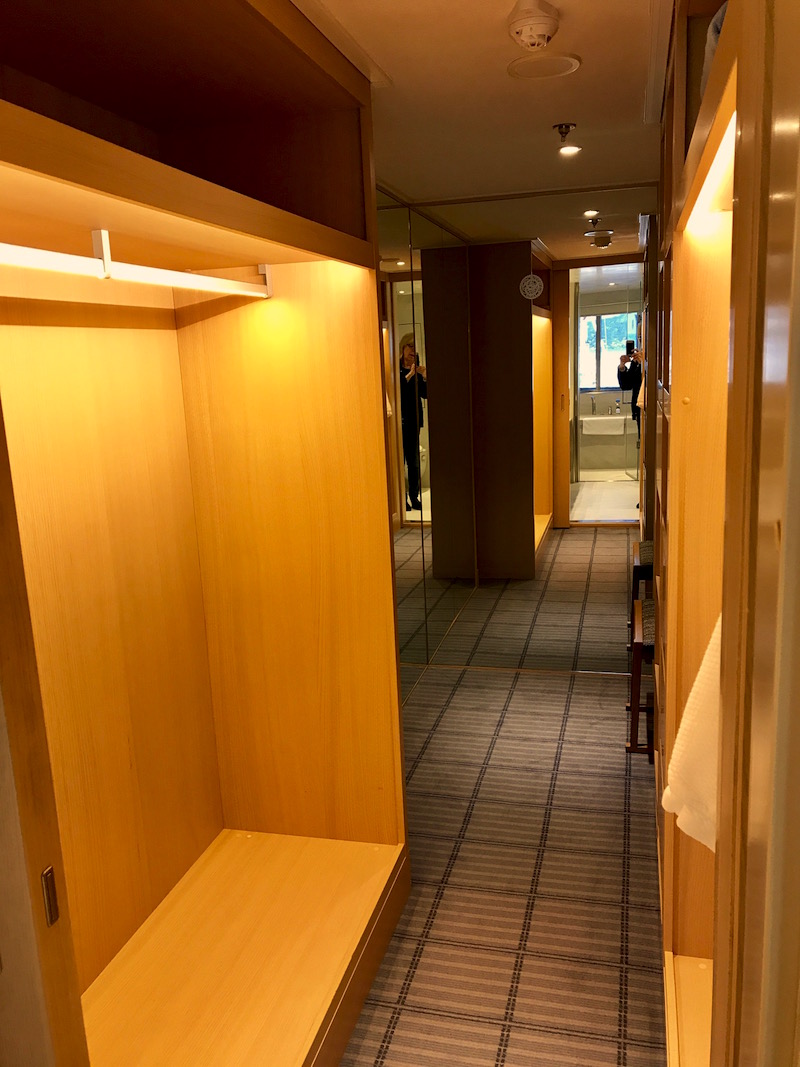 The balcony was roomy enough for a lounge chair as well as a table and four chairs; it had a privacy panel on one side and a windbreak panel on the other offering protection from the wind. It was perfect for reading or using the Viking Star binoculars to scope out the next port. At times, we felt like we were on our own private yacht.

Light and airy with double sinks and plenty of drawers and shelves for our toiletries, Explorer Suite bathrooms also feature a spa-like separate shower room with bath. Once you step on the heated floor and grab a warm bath towel from the heated towel rack, you immediately wonder if there is a way to have these luxuries at home. 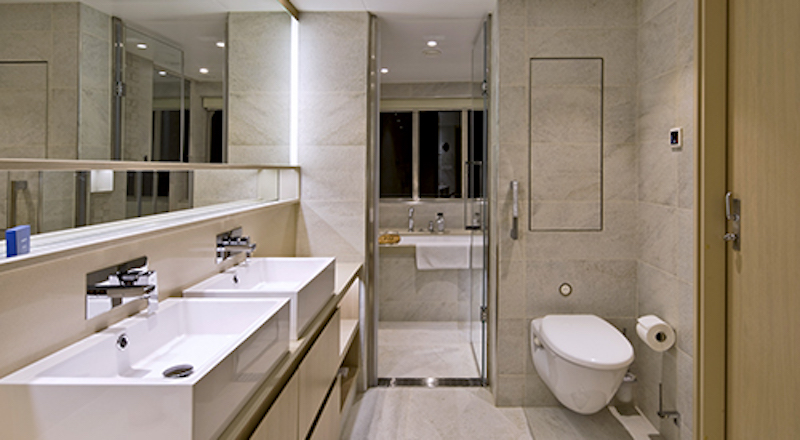 An oversized one-way window (with a vanity shade) beside the bathtub looks out over the bow of the ship—but the view has some competition. The mirrored wall also has a TV built into it. 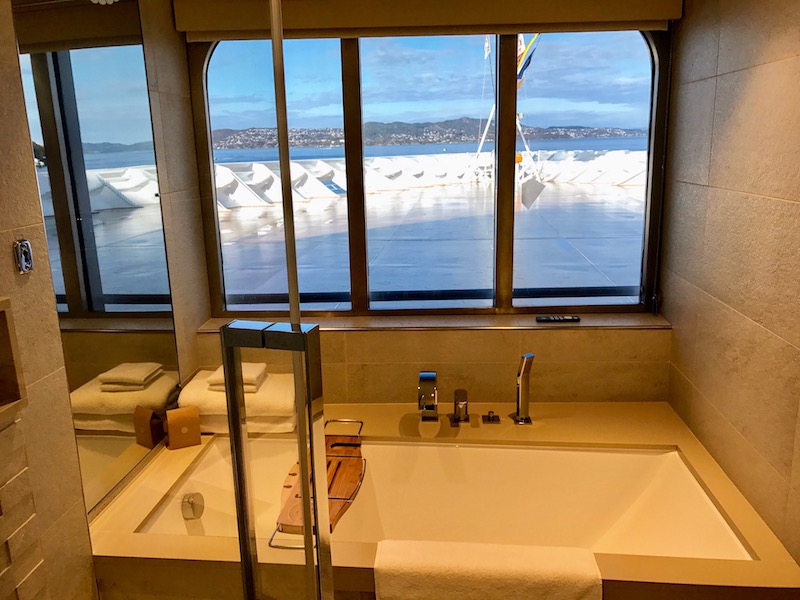 View from the bathroom in our Explorer Suite (Credit: Jerome Levine) 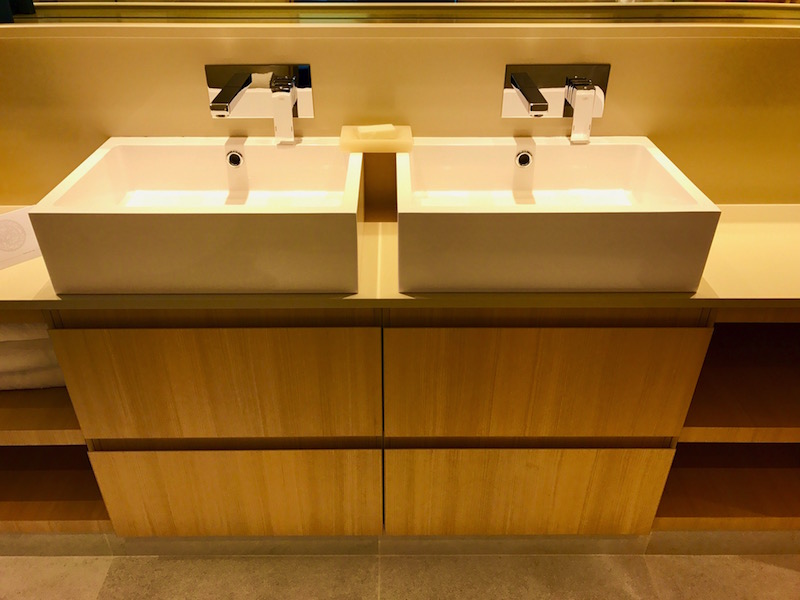 Convenient His & Her Double-Sinks with plenty of space to stow toiletries (Credit: Jerome Levine)

State of the art technology

We’ve sailed on many riverships and ocean-going vessels and found that the Internet connection in this suite was the most stable one we have ever experienced at sea.

In addition to the bath, our room had two additional flat-screen TVs, one in the bedroom and another in the living area. There were ample outlets throughout the stateroom (both 220V and 110V) as well as USB ports.

Other perks of the suite: Explorer Suite guests are offered 11AM priority access to their suites; priority reservations at the spa, on excursions and for specialty restaurants; a complimentary minibar with alcoholic beverages, soft drinks and snacks that are replenished daily; plush robes and slippers; and free laundry, dry cleaning, and shoe-shining service.

The only minor disappointment is that Explorer Suites on the Viking Star don’t offer conventional butler service—which we’ve experienced on other luxury lines. Generally, butlers make reservations for guests at spas, restaurants, excursions, etc. In addition, they offer the continuity of one person who can troubleshoot any problem.

However, we were blessed with two excellent cabin stewards, Elsnore and Augistino, who were always helpful and did a great job of orienting us to “suite life.” 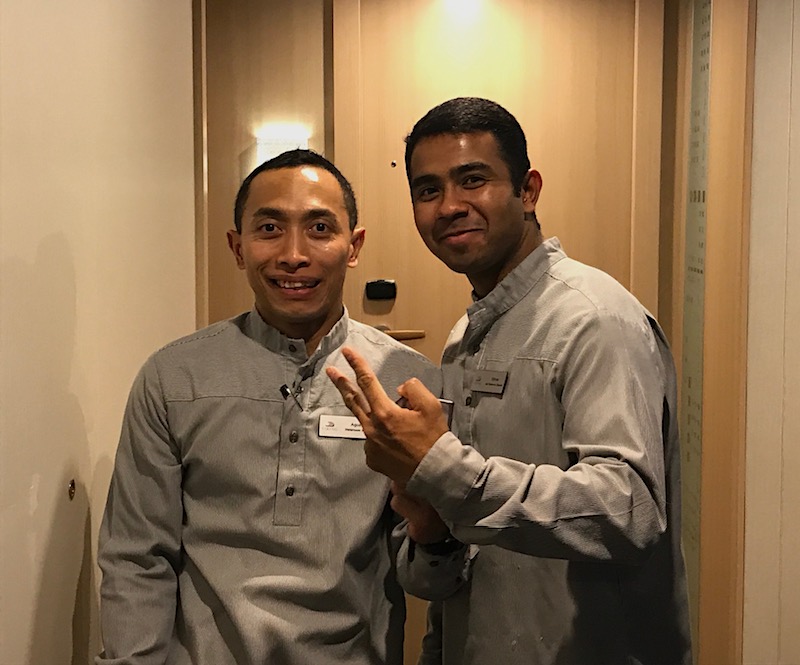 Cruising the seas in an Explorer Suite on the Viking Star is a perfect way to mark any milestone! Thank you to the staff and crew of Viking who arranged this unforgettable birthday journey for me. What a way to celebrate! But I fear that we have been totally spoiled… 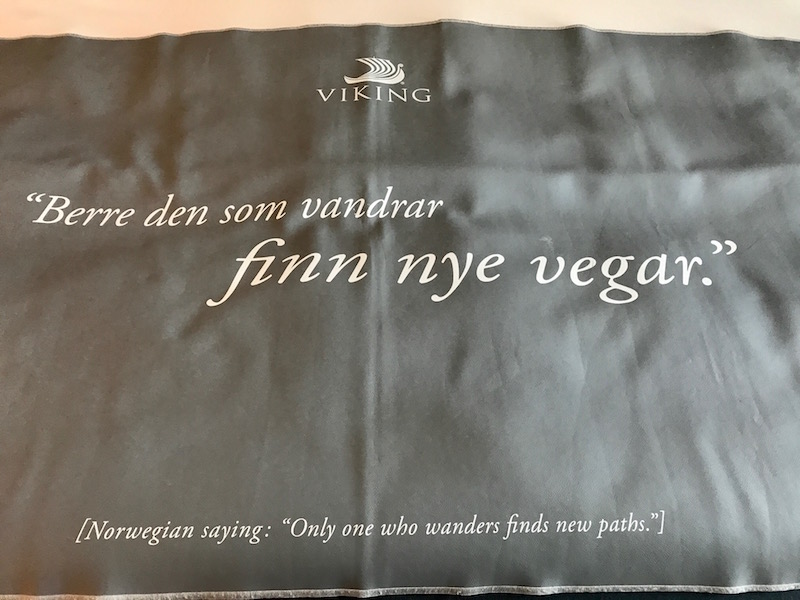 The author’s cruise was sponsored by Viking Cruises but any opinions expressed in this post are her own. 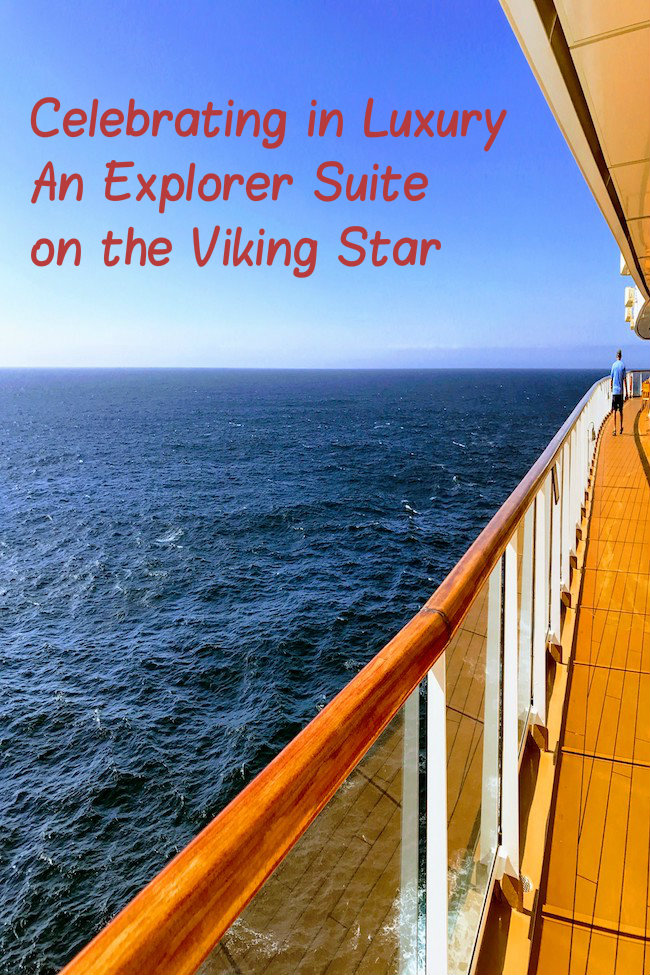