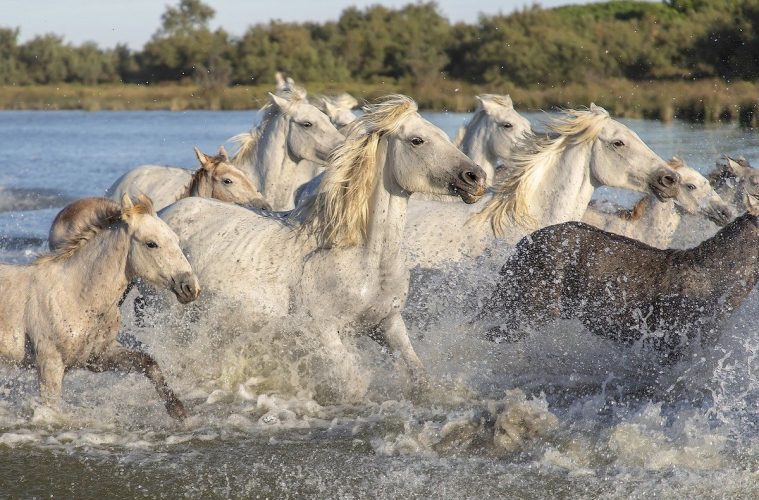 Home to both a UNESCO Biosphere Reserve and a Regional Nature Reserve, the Camargue region of Southern France seduces visitors with a unique cultural, geographic and economic identity.

Located between Languedoc and Provence and flanked by branches of the Petit Rhône and Grand Rhône, the area is filled with lagoons, pink salt ponds and nearly 400 species of birds. A barge cruise is an ideal way to explore this environmental gem sited in Western Europe’s largest river delta.

The Camarogue’s intriguing mix of residents includes Roma gypsies, cowboys and sauniers (salt workers). Thousands of pink flamingos, along with black bulls and white horses, color the landscape, which comprises over 300 square miles. Yes, it was a surprise to find this interesting combination of players coming together here.

Rich in biodiversity, this coastal triangle is off the radar of most travelers. I discovered it aboard a hotel barge tour on the Rhône river with France Cruises. The Carmague estuary is a highlight of the Provence itinerary. While gliding through the region aboard MS Anne-Marie, passengers view rice paddies, swaying grasses and ancient villages. 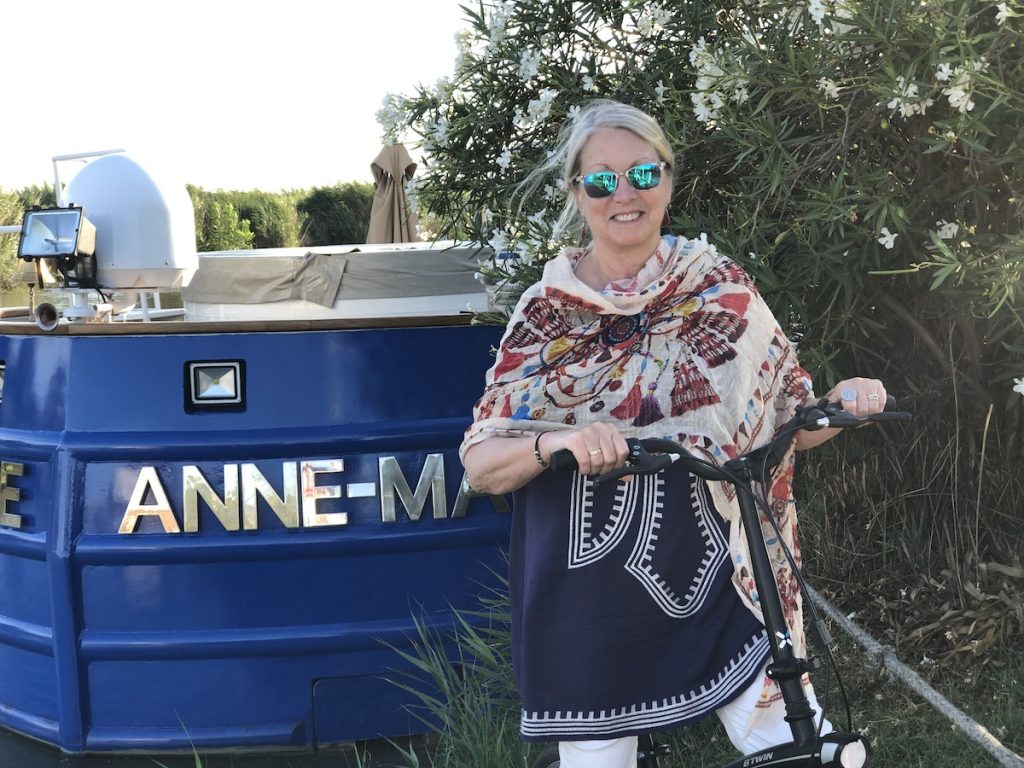 Cowboy culture in the Camargue

France’s only cowboys inhabit in this district. Their way of life and customs are a fiercely guarded tradition. The herdsmen and women are known as gardians; the Spanish influence is apparent in dress, language and cuisine. 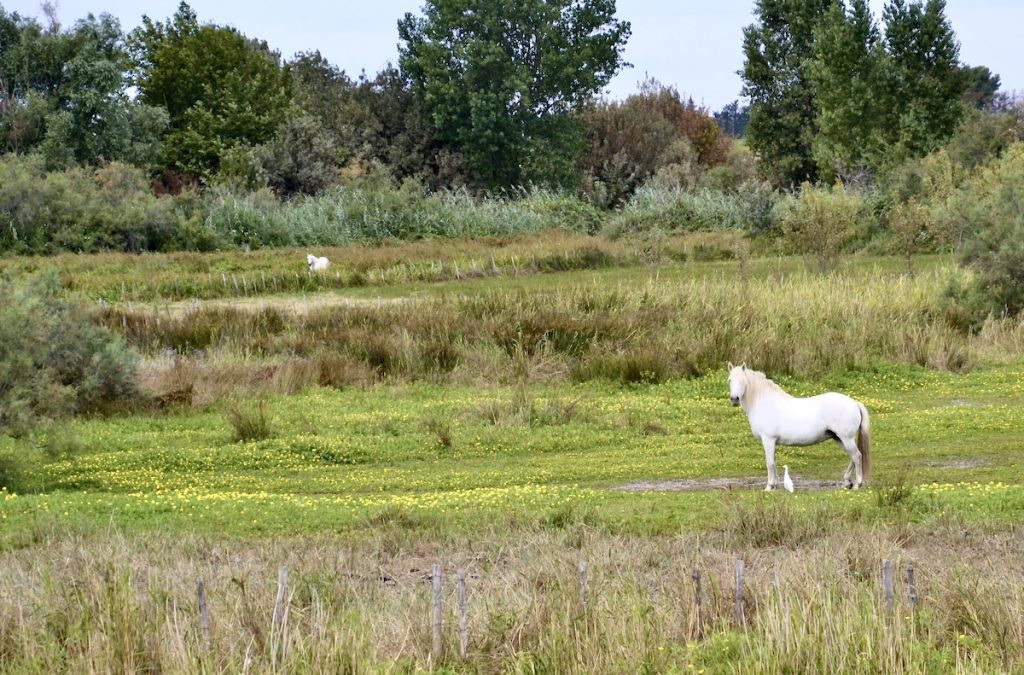 Horses grazing along the Rhone in the Camargue (credit: Alison Abbott)

You might have seen photos of the region’s regal stallions, furiously galloping through the marshes of the Camargue. The imposing, athletic mounts, ridden by the gardians, are used for herding bulls and participating in the bull games.

The iconic horses, known for their white color, are said to be one of the oldest breeds in the world. Small and athletic, they were used previously for agriculture and transportation. Although born black, they turn white and develop their remarkable white mane after three years. A horseback tour is a fantastic way for visitors to explore the protected ecosystem. 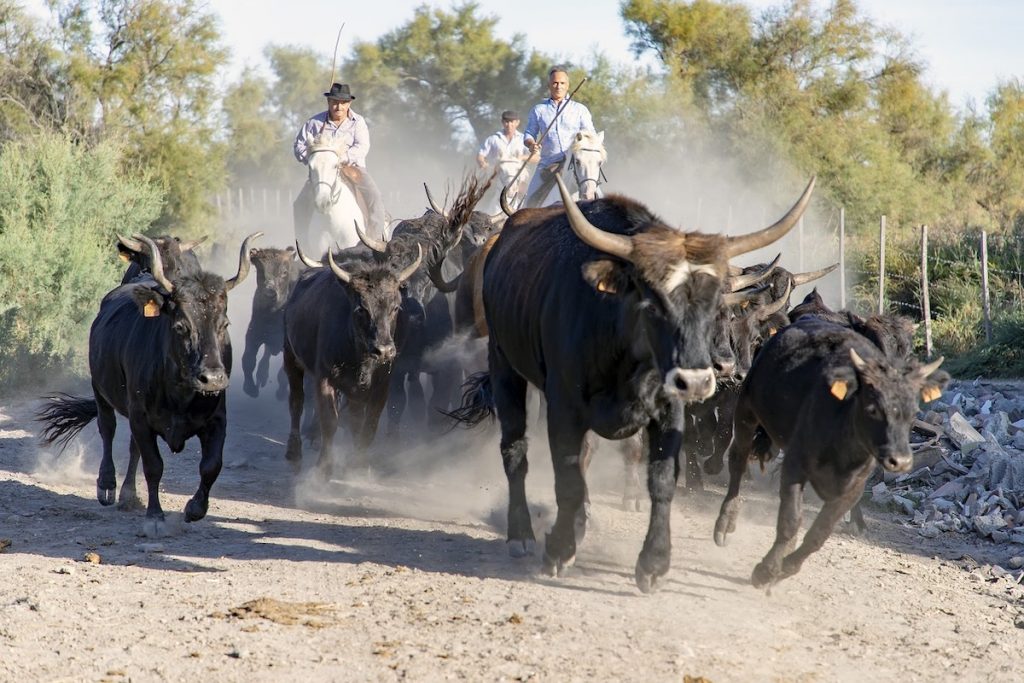 Cowboys at work on a manade (credit: Pixabay/Christian Klein)

The herds of bulls and horses typical of the Camargue tradition are better known in the area as manades. Tourists can find over 20 privately owned manades, where the animals are allowed to roam quite freely in their natural environments. They graze in pastures during the winter and in marshes over the warmer months. As the marshes are grazed down, a spectacular show of irises takes over. 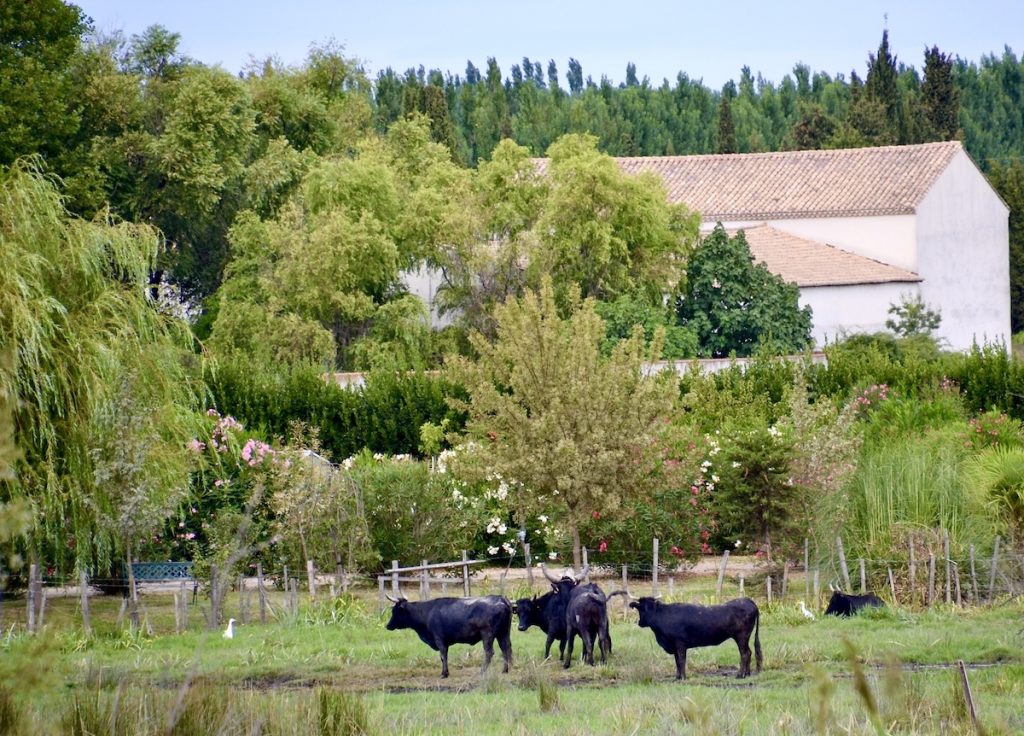 Bulls grazing at a manade along the Rhône (credit: Alison Abbott)

Bulls are prized and raised for the Camargue bull race, a tradition quite different from its Spanish counterpart. Here, the animals are the star of the show rather than the matador. Only about half the size of their cousins across the border, they are fierce competitors in the ring. Participants collect ribbons from the lyre-shaped horns of the bull while trying to avoid being gored. The supreme bull is awarded Le Biou d’or (the golden bull) and the owner of the manade greatly honored, as the champion can command impressive stud fees.

Visitors to a demonstration at a manade can catch a glimpse at the way of life of these French cowhands. Bulls are sorted into groups. Stronger animals are headed to the bull-running games in area villages; the less fortunate, to the slaughterhouse.

The meat of the Carmague bull has been awarded the prestigious appellation d’origine protégée label. Both bull paté and sausage are favorites in the region As a free-range animal, the meat is lean and low in cholesterol and usually organic. 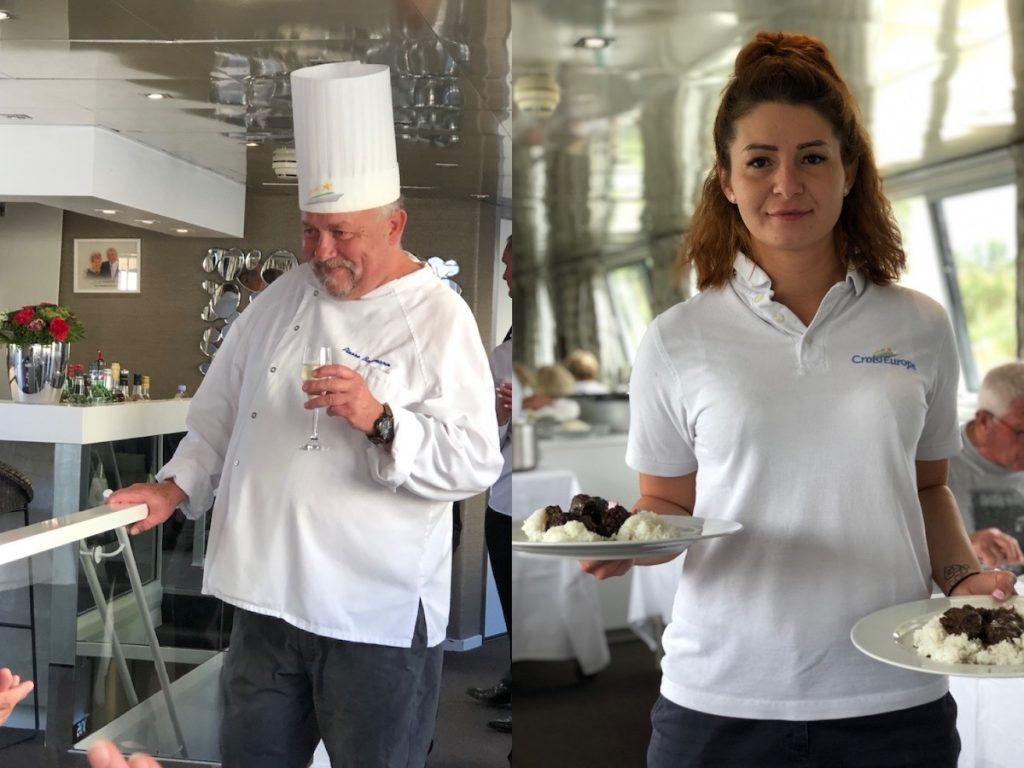 Back onboard Anne-Marie, Chef Pierre created a rich and savory Gardiane de Taureau. This slow-cooked stew made with bull’s meat looks similar to the better-known Beef Bourguignon. Originally made as a hearty meal for the local cowboys, this regional dish is a favorite with visitors and can be found on menus in many local restaurants. When asked to guess the recipe’s secret ingredient, it took several minutes before one of my cruise mates came up with the mystery spice: star anise. With a hint of licorice, it paired well with the wine selection.

Chef Pierre served the stew with Camargue rice, regional wines, and freshly made fougasse, a focaccia-like bread from Provence. All of the guests aboard Anne-Marie appreciated this bread, which was an excellent vehicle for soaking up the flavorful gravy.

The roads leading into Saints Marie de la Mer passed charming, white, stuccoed seaside cottages accented with turquoise and aquamarine shutters and doors and topped with thatched roofs. Terracotta pots overflowing with geraniums added a pop of color and competed for attention with the bougainvillea. This picturesque road along the Mediterranean shore led into the town, where the village is centered around the fortified church. 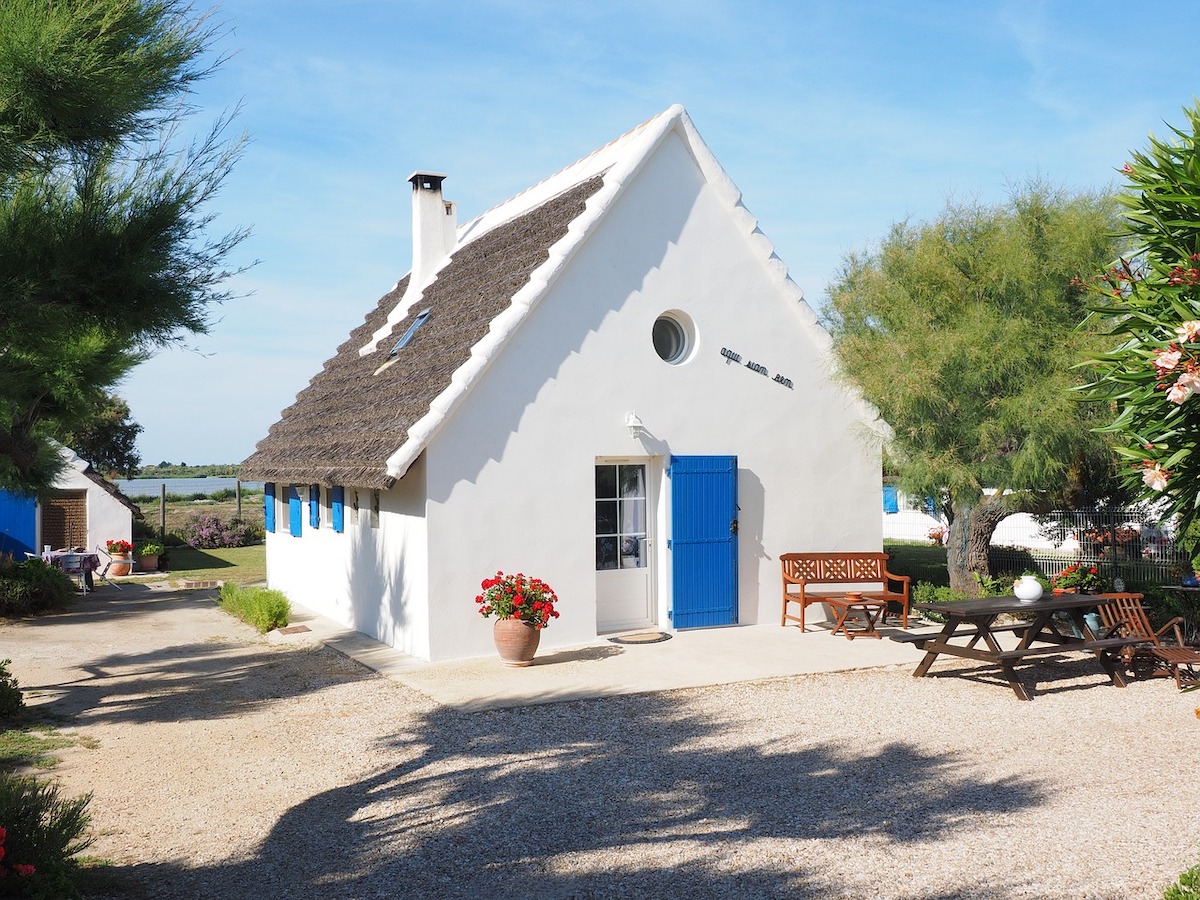 According to local legend, the town is named for the three Marys: Magdalene, Jacoby and Salome. Allegedly they sailed here from Palestine after the Resurrection to escape persecution. Sarah, a maidservant who accompanied them, is revered by the Roma as the Black Madonna, their patron saint. In May, thousands of Roma make a pilgrimage, coming together at a festival here that honors her with shared rituals and traditions. 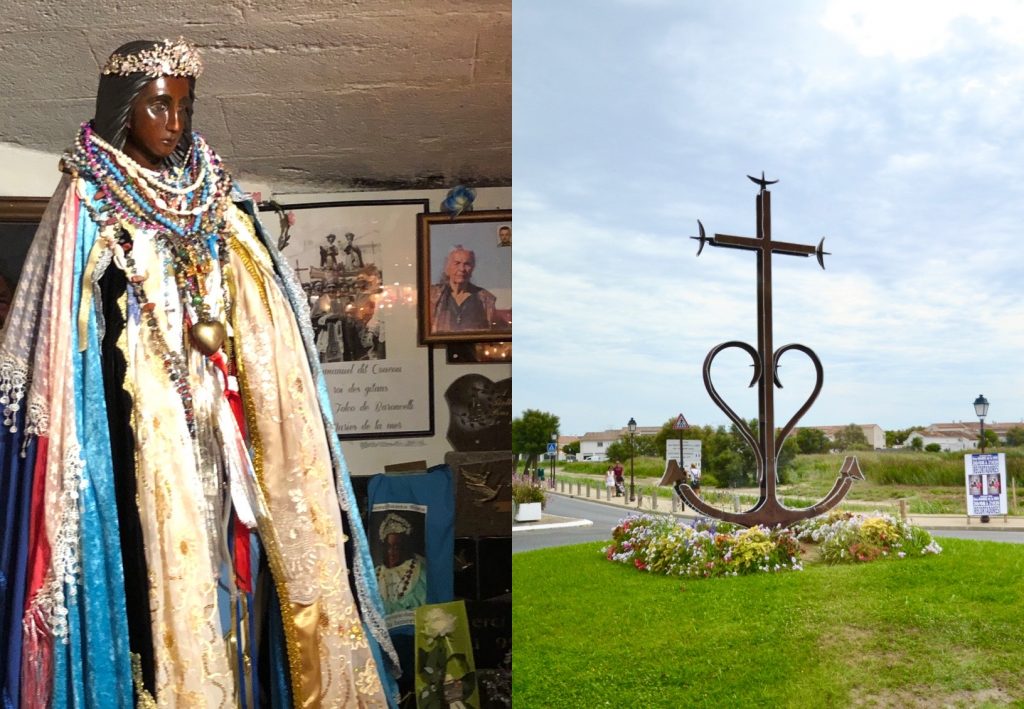 Another constant symbol in the region is the Camargue cross representing the three cardinal virtues: faith, hope and charity. Faith, with its three-pronged forks, is portrayed as a working tool used by the gardians. The heart, in the center, signifies charity. The anchor, symbolizing hope, recognizes the fishing traditions by the sea.

The largest salt pans in Europe are found in the Camargue region. The vocation of the local sauniers can be traced back to antiquity. Outside the medieval town of Aigues-Mortes, a miniature train transports visitors along the salt ponds where over 800,000 tons of salt are produced each year. Enormous snowy mounds of the mineral are surrounded by ponds in all shades of pink.

One would be forgiven for thinking they were entering the land of rosé because, in actuality, they are! The area is known, too, for its rosé wines. 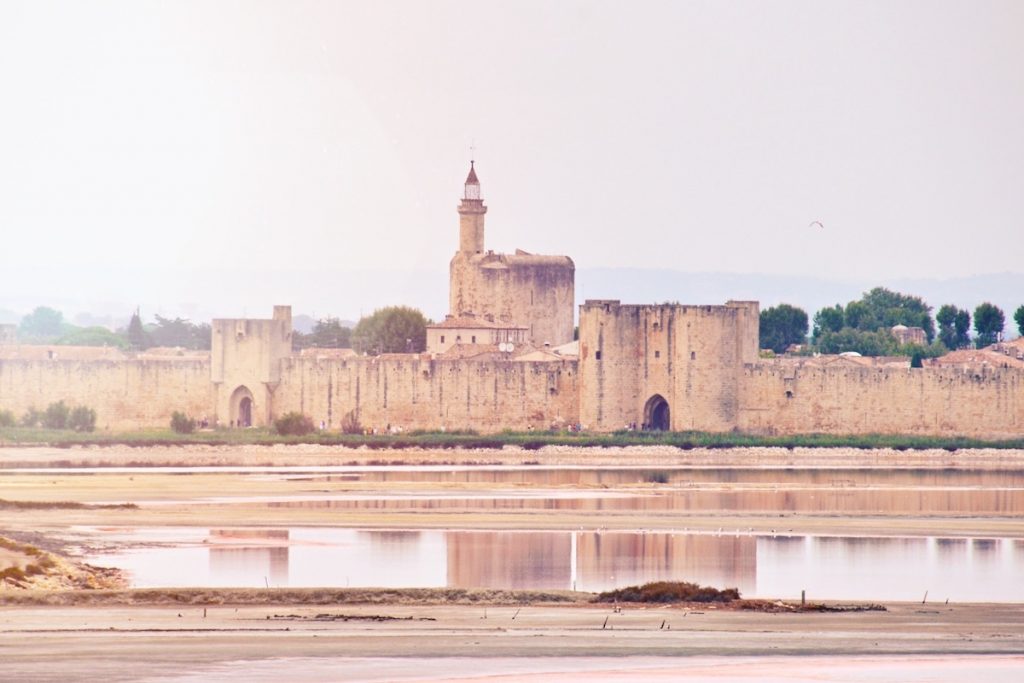 An on-site museum further enhances the visit with informative displays of the history and the salt-producing process in the Camargue. Today, over 7,000 residents call this medieval city home. It is one of two cities in the region surrounded by massive marshlands that helped protect them against attacks.

The environment flora and fauna of the Camargue region

The wetlands are blessed with mild winters and hot summers and are preserved as a unique ecosystem that’s home to remarkable flora and fauna. The eight communities bordering the alluvial marshlands joined together in 1993, forming the Gard Regional Council to manage the wetlands, nature reserves and waterway development.

Visiting the Parc Naturel Régional de Camargue is an excellent way to get a sense of just how beautiful and remote the Camargue region is. And interpretive displays about eco-systems and climate, located along the nature trails, help educate visitors about what they’re seeing and experiencing. 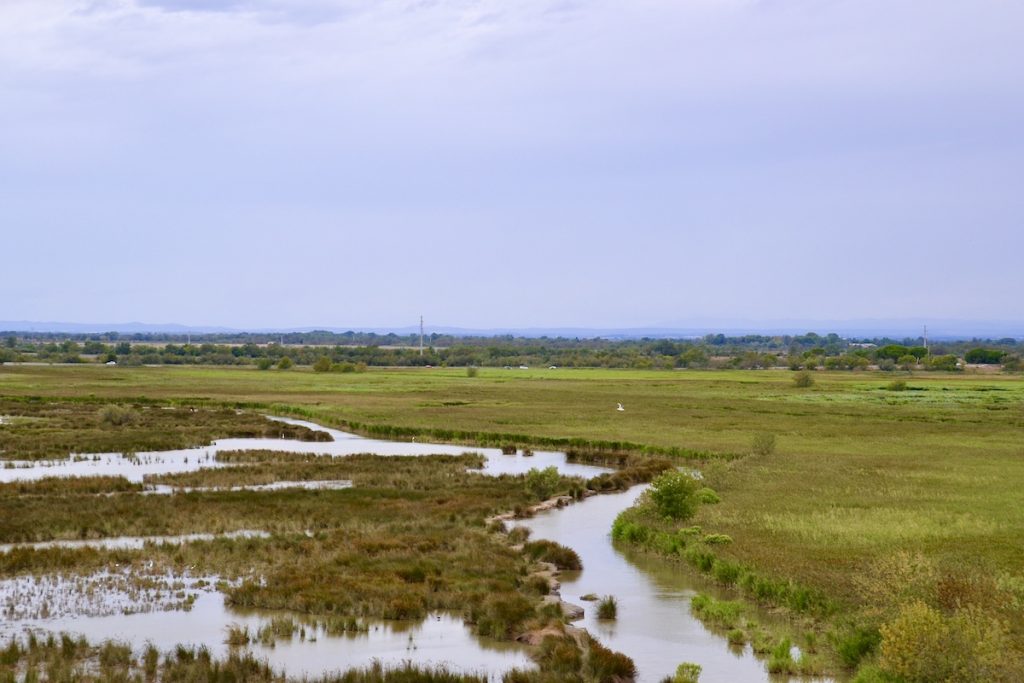 Wetlands in the Camargue: A haven for birds (credit: Alison Abbott)

For the best 360-degree vantage, climb the observation tower. With sightlines all the way to the Mediterranean, on a clear day visitors can see Plage du Beauduc (the beach at the end of the world). 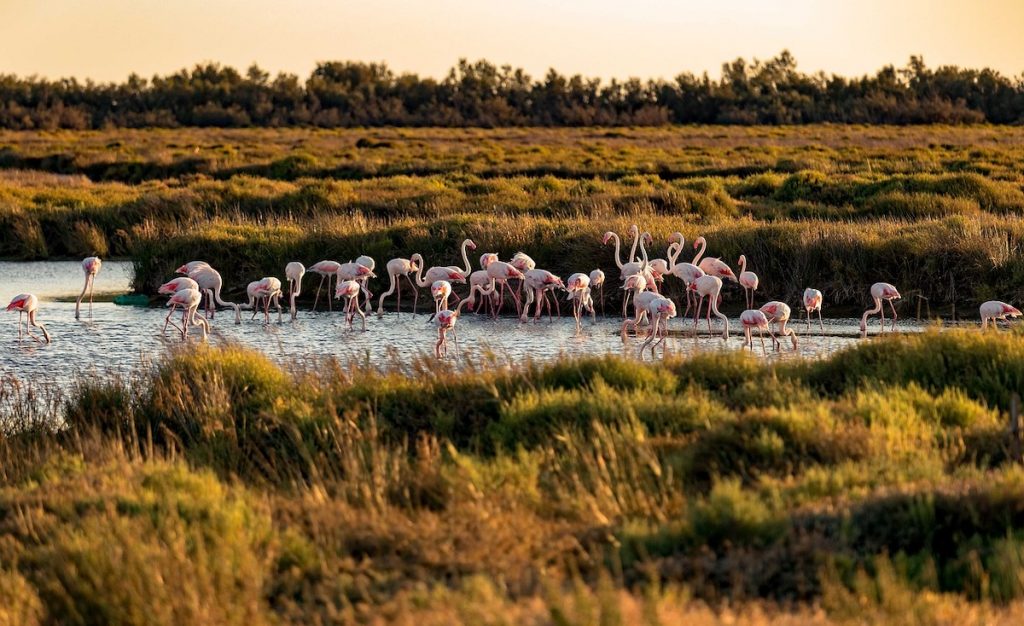 Bird-watchers from around the globe who flock here are richly rewarded with sightings. Hundreds of species either nest permanently here or make a stopover on their migratory paths. Like the salt ponds, the flamingos’ famous pink hue is colored by a microorganism ingested when eating shrimp in the shallow waters. Across from this area, aviaries salt a bird park located on two acres of marshes and wetlands. 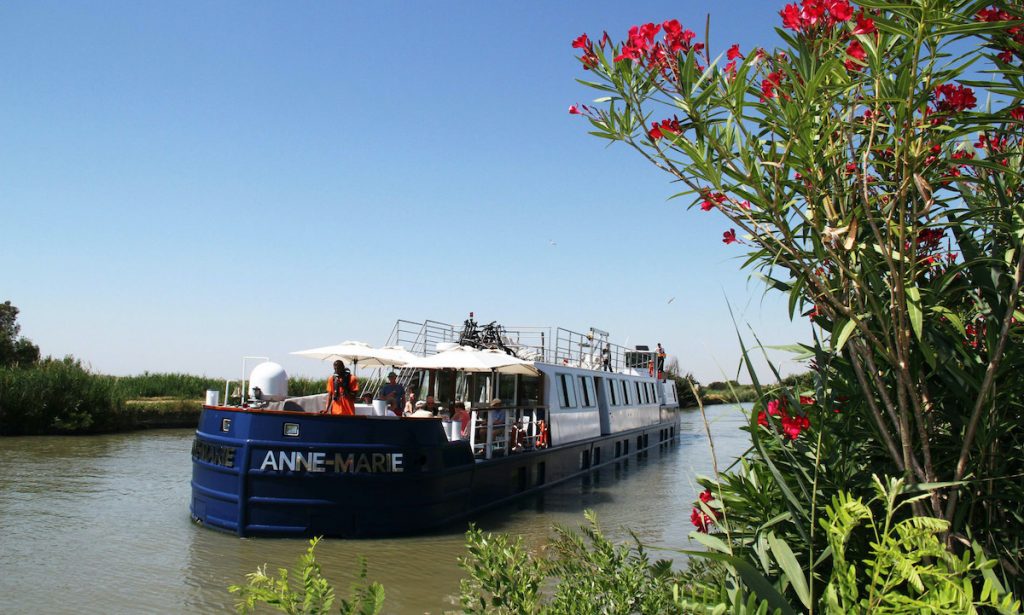 Experiencing a rare glimpse into the diverse cultures of the region is, without doubt, a highlight of a barge cruise along the Rhône. Taking a peek at the Wild West of France, the salt-producing Aigues-Mortes, the history of the Roma in Les-Saintes Maries de la Mer and the wealth of the biological diversity of the wetlands make for a memorable trip.

It’s rare to come across a landscape where the importance of preserving cultural traditions lives alongside a precious environment. Fashioned by streams and lagoons, the Camargue region represents a priceless mosaic in a part of France that all-too-few travelers discover.

Disclosure: The author was a guest of France Cruises. 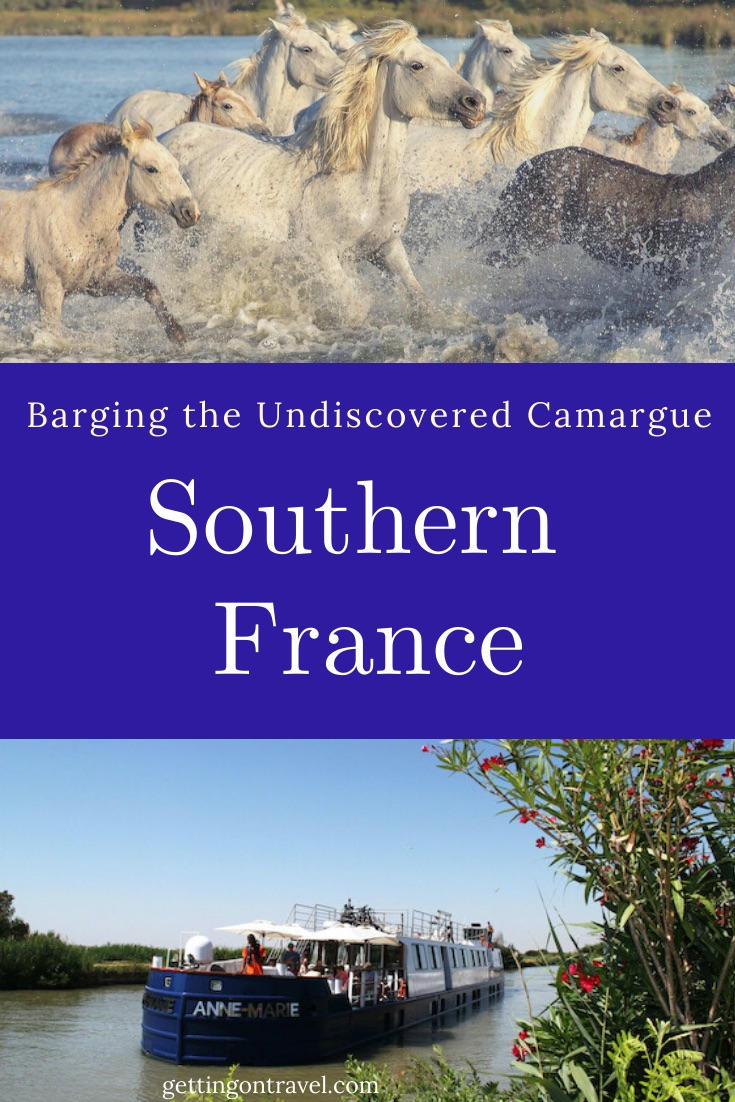