American Cruise Lines (ACL) recently announced the November 17 launch of the American Song riverboat, the newest addition to the growing riverboat industry in the U.S.

Built by Chesapeake Shipbuilding of Salisbury, Maryland, the launch of the new ship on the Wicomico River took place seven weeks ahead of schedule. The ship is currently making its way to Chesapeake’s East Outfitting Basin for completion of its upper decks and further outfitting.

Unlike many of the repurposed paddle wheelers currently operating on America’s rivers and coastal waterways – both by this company and the American Queen Steamboat Company – American Song is a new build that promises to bring U.S. riverboats into the 21st century.

The modern ship has a four-story glass-enclosed atrium, and will accommodate 190 passengers in 102 staterooms on five decks. Its staterooms with hotel-size private bathrooms will be the largest in the industry. All will have private balconies and interior entrances (many steamboats only have exterior entrances on the decks). The ship will also have single staterooms for solo travelers.

According to industry publication Travel Weekly, “The American Song will be wider, faster, and quieter than any of ACL’s other river cruise ships.” A technologically advanced bow design will allow the ship to dock with its main deck directly on a river or dock, expanding the possibilities of new port stops along the nation’s rivers and coastal waterways.

The environmentally-friendly ship will welcome its first passengers on the Mississippi River in the fall of 2018 and offer Columbia and Snake River itineraries in 2019.

The domestic cruise industry in the U.S. began its rebirth with the $6 million overhaul of the American Queen in 2012, the first steamboat to carry overnight passengers.

The popularity of domestic cruises has been soaring as many older travelers have grown skittish about European travel and are searching for closer-to-home alternatives.

American Cruise Lines will operate 10 riverboats of its own by 2018, offering 35 itineraries along the rivers as well as coastal and inland waterways of the U.S. including New England, Alaska, the Pacific Northwest, the Mississippi River system and the Southeast. 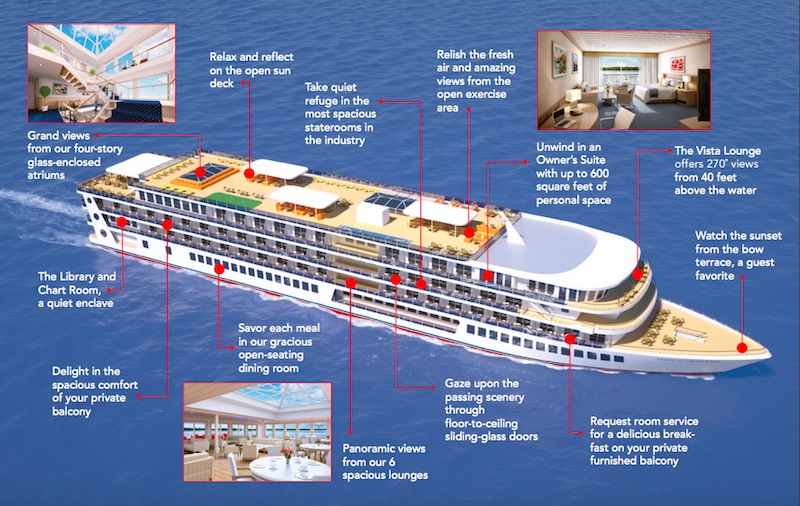