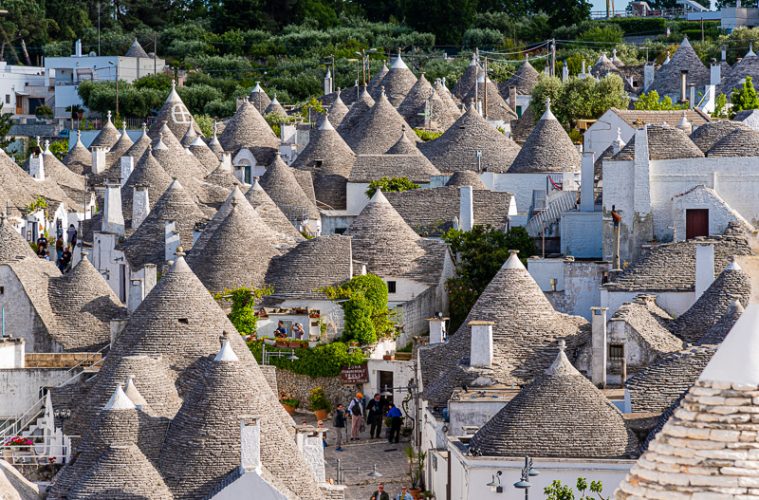 Claudia Caporaso flashes a broad smile as she welcomes us into a trullo, her home in Alberobello, Italy. Outside, the white building with its conical roof blends into a scenic row of trulli converted into shops and restaurants. Inside, the home features a modern interior: bath and kitchen, a comfortable bedroom and a cozy living/dining space centered around a stone fireplace. Sometimes, and today is one of those times, she invites visitors in for a glimpse of past-made-present. In her shop next door, also in a trullo, Ms. Caporaso sells terracotta whistles made by local artisans.

Tom and I were in Alberobello to experience Arboris Belli, an annual festival celebrating local traditions and culture. We stayed in a trullo, ate in trulli restaurants and with Alberobello as our base, we explored the surrounding countryside. It will be a year until the next Arboris Belli festival, but the city’s cultural offerings, dining and touring opportunities and accommodations provide reasons to travel to Alberobello any time of year.

Alberobello is located in the heart of the Valle d’Itria, and is readily accessible from the region’s airports in Bari and Brindisi. The city is considered Puglia’s trulli capital and its two historic centers — Rione Aia Piccola and Rione Monti — consist entirely of the stone dwellings, whitewashed with quicklime and with the conical roofs that give the town an otherworldly, fairy-tale air. Alberobello is a must-see for many travelers in Puglia, either as a day trip from Bari or nearby towns, or as a destination in itself. 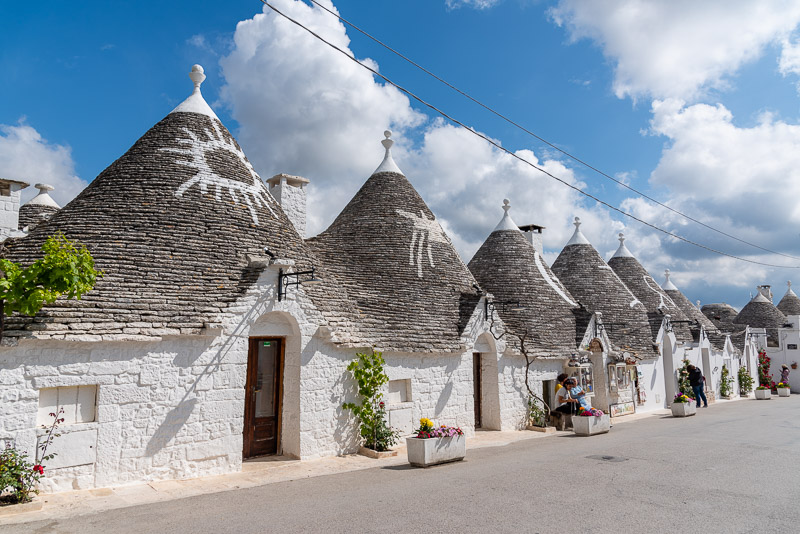 Many of the city’s trulli are inhabited by locals, although others now house shops and tourist accommodations

Alberobello’s first trulli were built here in the 14th century. By the late 18th century, when the village was designated a city by the King of Naples, the city’s trulli numbered 3,500. In 1996, the historic centers were awarded UNESCO World Heritage status as an exceptional Historic Urban Landscape. Today, approximately 1,400 trulli remain, many of them inhabited by locals, like Ms. Caporaso.

The simple structures were built using drywall construction and the limestone abundant in the region. They were originally intended to be dismantled at the whim of feudal lords, in order to evade taxation as houses. Built of wood and stone and insulated with hay, the trulli maintained a constant temperature of 18 degrees Celsius year-round, much like a cave or grotto.

Trulli with pinnacles were used as homes, and the more intricate the pinnacles, the richer the family. Several generations of large families lived together under one roof, with children sleeping on wooden planks set under the conical roof above the living space. 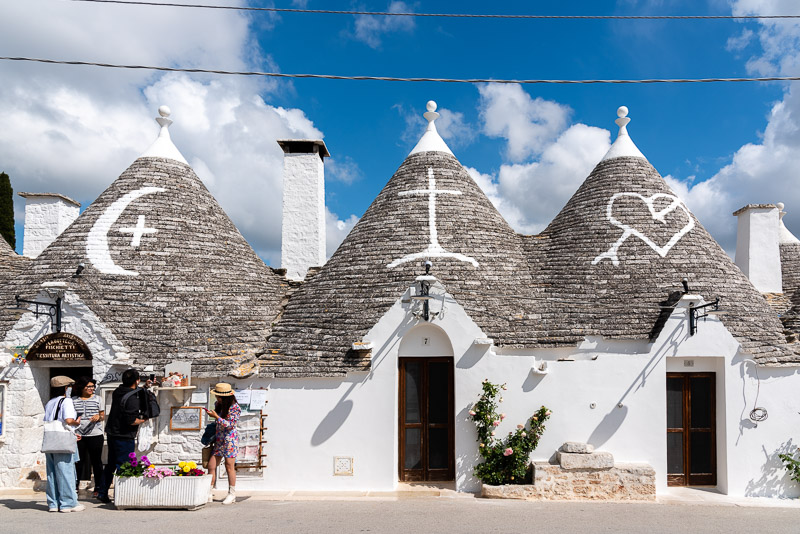 Many of the roofs are painted with symbols from the 16th century, including the Islamic crescent, as well as crosses and other Christian symbols.

A wander around the little city offers glimpses into what life might have been like in earlier times, a church that pays homage to trulli architecture, and the building that represents the city’s transition from feudal village to an 18th-century city.

In Rione Aia Piccola, citizens of Alberobello, dressed in period costume, demonstrate the use of original tools and explain how their ancestors lived and worked here. In Rione Monti, grandmothers make pasta in different shapes: orecchiette, cavatelli, and vermicelli. The ladies readily take a time out to offer tastes of liqueurs made with apple seeds, basil or laurel leaves, and sweet cherries. Nearby, artisans carve limestone into pinnacles and weave baskets. 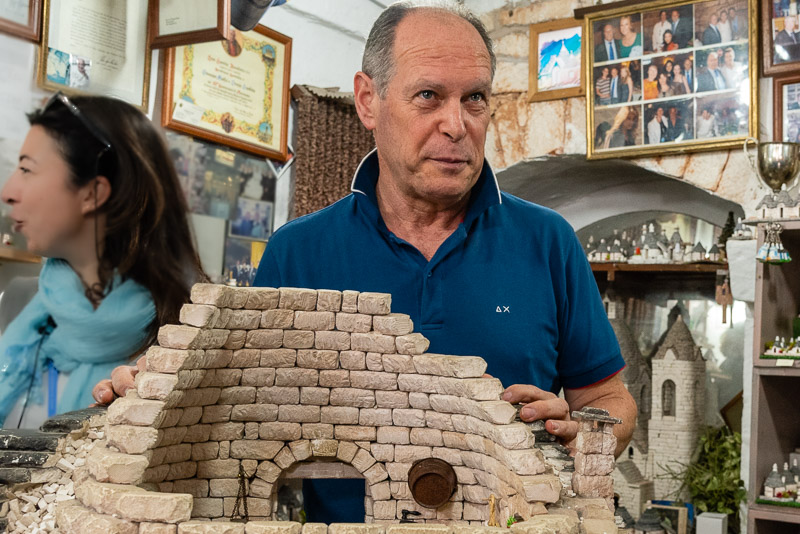 Guiseppe Maffei, architect and Cavaliere of Italy, explains the construction of trulli in his shop 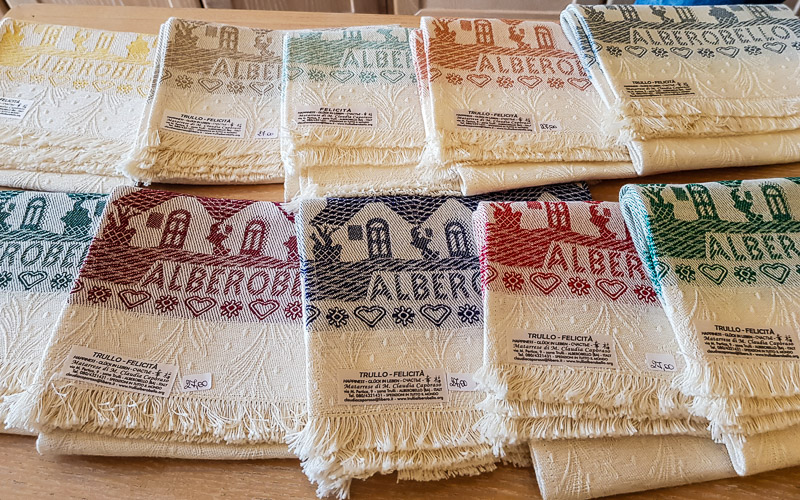 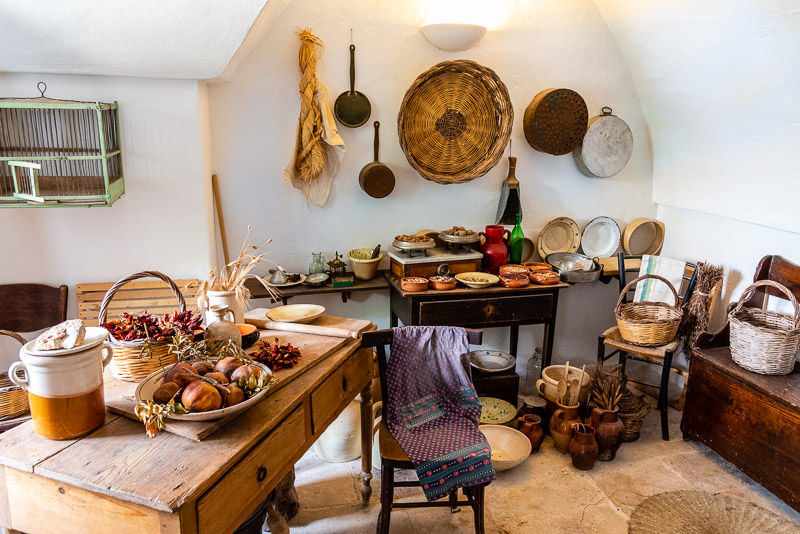 Casa d’Amore on Piazza del Popolo was the first house built after Alberobello received its designation as a city in 1796. Its two-story structure illustrates the moment of passage and change for Alberobello. Across town, the Romanesque styled Church of Sant’Antonio was built in the shape of a trullo and consecrated in 1929. Inside, local artists painted a Byzantine-style fresco and sea rocks were used to make an altar and priest’s lectern. 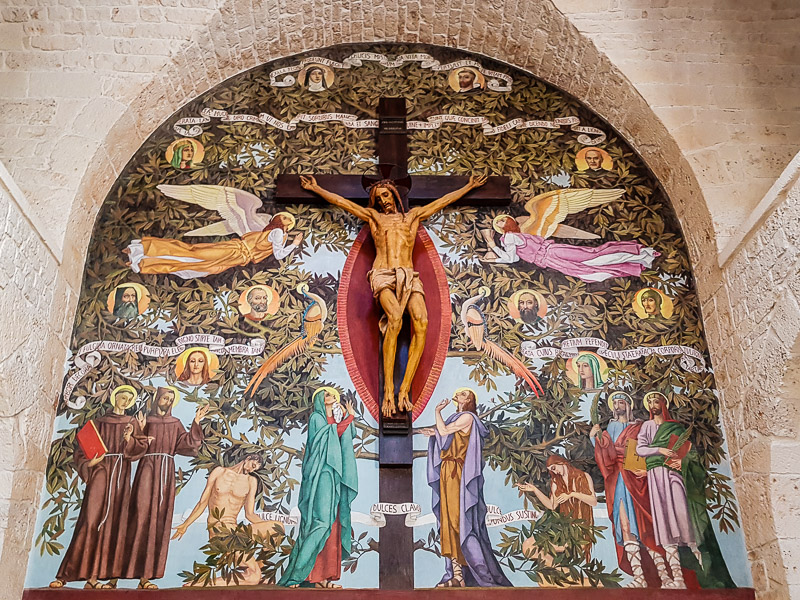 “Tree of Life” fresco in Alberobello’s Church of Sant’Antonio

Puglia is known for its Cucina Povera (literally poor kitchen), which means seasonal dishes prepared with fresh, local ingredients, whatever is at hand. In this historically impoverished region, it also meant creative substitutions—wheat for meat, for example—and imaginative uses of vegetables, olive oil and herbs. Today’s chefs have taken their cues from this tradition and embellished or transformed recipes passed down through generations of Puglia home cooks. It is world-class cooking!

Restaurants abound in Alberobello and the surrounding countryside and the region offers many opportunities to sample Puglia dishes and wines. During our visit, several chefs in Alberobello surprised us with their creativity and winsome style.

Sleep in a trulli

Trulli dot the landscape of central Puglia, nestled among olive groves, oak forests and fields separated by low limestone walls. However, nowhere is there a concentration of trulli that outshines the historic center of Alberobello.

Here are a few options for trulli accommodations with a touch of luxury:

La Chiusa di Chietri Grand Hotel is located in a park filled with olive trees a short drive from Alberobello. It offers accommodations in either hotel rooms or the twelve trulli of Borgo Chietri. Guests can enjoy in-house spa services and meals from Executive Chef Pier Luca Ardio in the hotel’s Nobis Restaurant.

At Le Alcove-Luxury Hotel nei Trulli, accommodations are in trulli near Alberobello’s main square. A full home-cooked breakfast, free reserved car park and shuttle to airports, train stations and ports in the region are included.

Trulli e Puglia Resort is located in the center of Rione Monti. The family-owned property also offers wellness packages and local food tastings in Italian and English, as well as airport shuttle service from Bari or Brindisi airports.

What’s appealing to an over-50 luxury traveler?

Disclosure: The authors’ visit was hosted by ARTECA Alberobello and the Comune di Alberobello. All opinions expressed are their own.

For more information, take a look at our dining recommendations on Anita’s Feast!

In Alberobello, Cucina Povera gets an upgrade 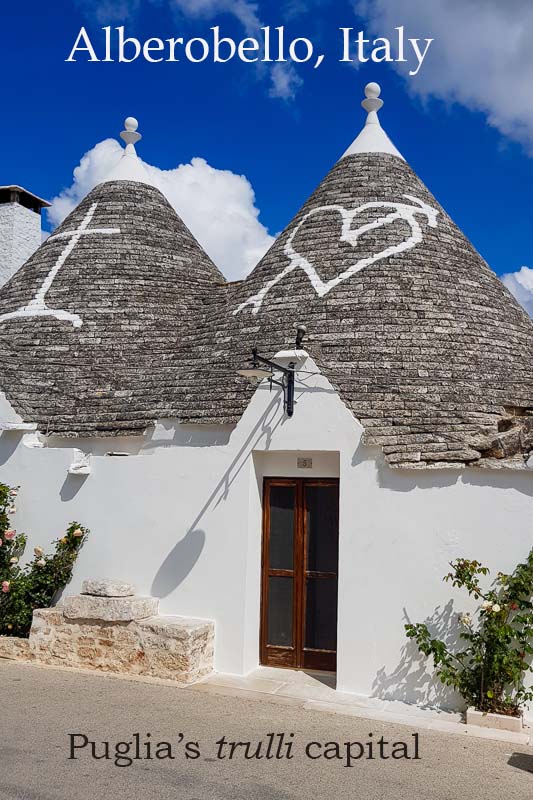