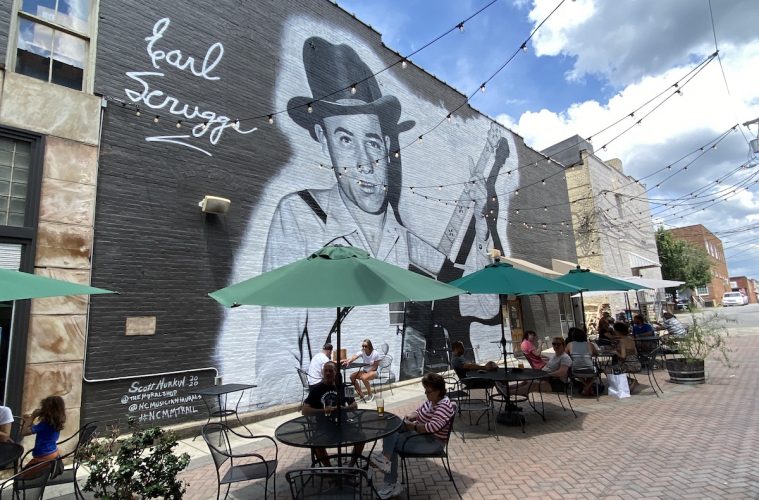 It’s easy to spend a perfect long weekend in Shelby, North Carolina, a stop on the North Carolina Blue Ridge Music Trail. This city and surrounding Cleveland County proclaim their musical heritage with the slogan: Carolina’s Land of Rhythm and Roots.

During our visit, we found impromptu, staged and open-air performances. But that’s not all this area offers. Other simple pleasures include down-home cooking, a history dating from the Revolutionary War, a winery, and local food specialties, including barbecue and wine. All are delivered with old-time hospitality.

Our getaway coincided with the Art of Sound Festival showcasing arts and music at eclectic venues. Among these: a courthouse-turned-museum to honor a bluegrass treasure, a rousing evening performance at a repurposed movie house, and an inviting town park that sparked our inner children to ride a miniature train and a 1919 carousel. 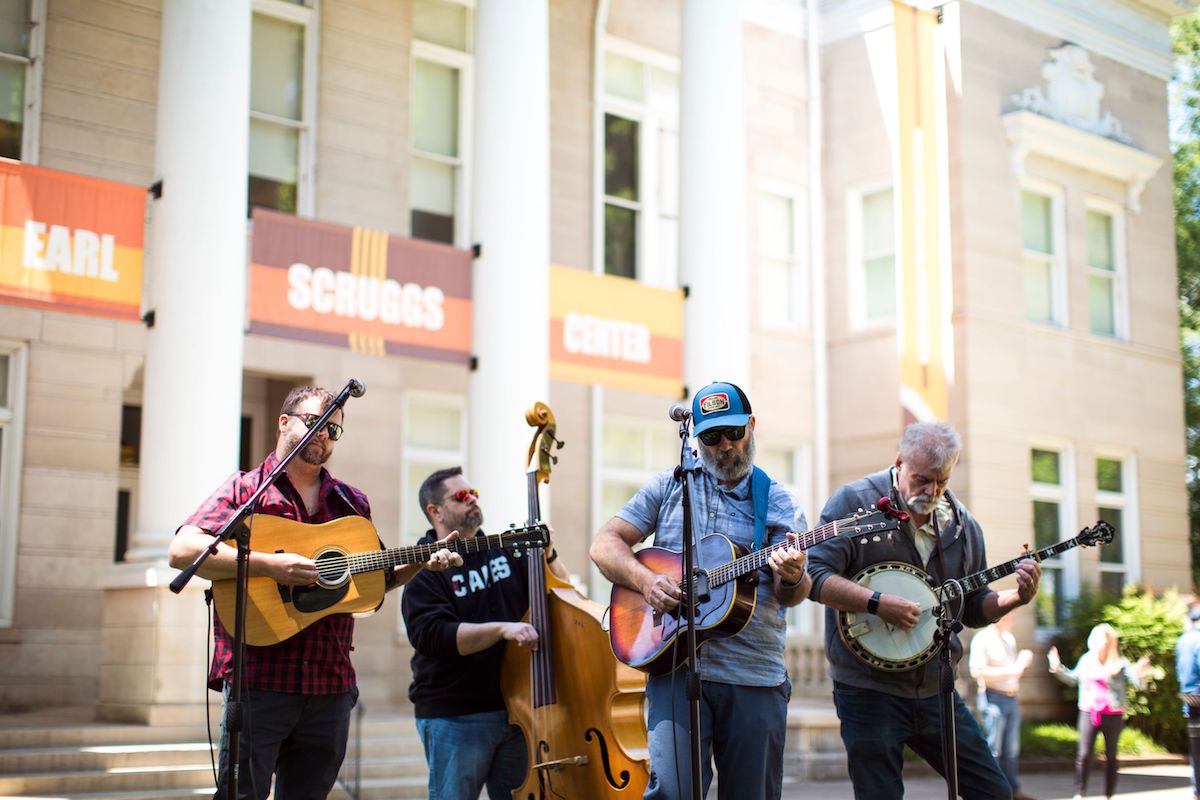 During a perfect long weekend in Shelby, North Carolina, you might enjoy live music in front of the Earl Scruggs Center (Credit: Cleveland County Tourism)

Easy-to-navigate Shelby may be best known as home to bluegrass/banjo great Earl Scruggs. It honors its hometown hero with a well-executed, informative museum located in the former circa-1907 courthouse that looms over the tree-rimmed main square uptown.

Here, a life-size statue of Scruggs greets visitors at what’s officially called the Earl Scruggs Center: Music & Stories from the American South. The first of three galleries, “Out of Carolina,” traces his time in the local textile mills to his early days on the road, including making it on stage at Nashville’s famed Ryman Auditorium. 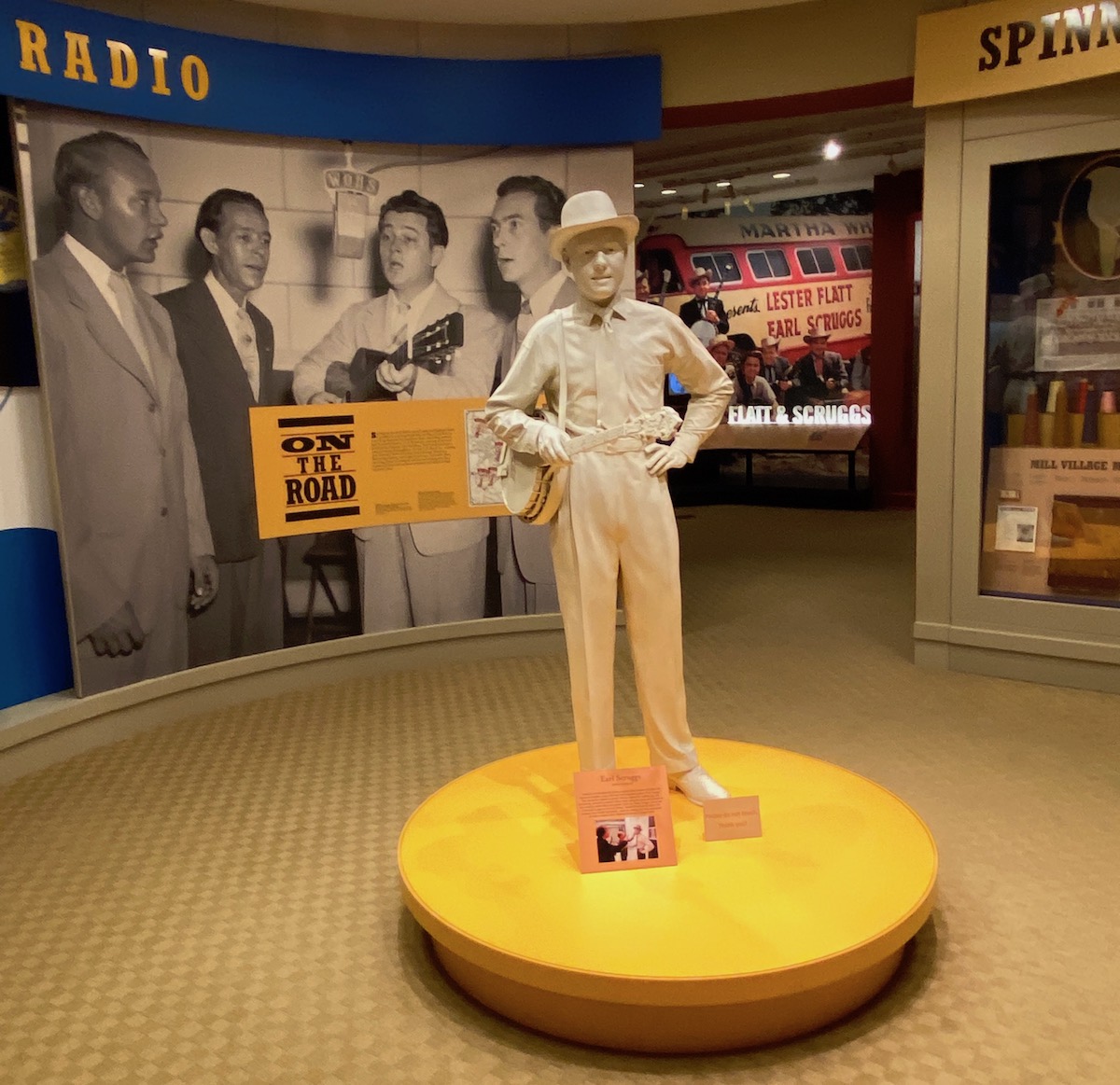 An excellent guide enthralled us with Scruggs’ long-lasting influence. He is best known for the unique, three-finger, five-string, banjo-picking technique that became the foundation of what’s now known as bluegrass music. To this day, it’s still called the Scruggs style.

We delighted in a display of old TVs showing some of his appearances on The Beverly Hillbillies with then-partner Lester Flatt. The duo created the show’s theme song and founded the popular group Foggy Mountain Boys in 1948. Before that, both played with the iconic Bill Monroe and his Blue Grass Boys. The Country Music Hall of Fame inducted both Flatt and Scruggs in 1985. Like many viewers, filmmaker Ken Burns’s 2019 series Country Music reintroduced us to the duo. 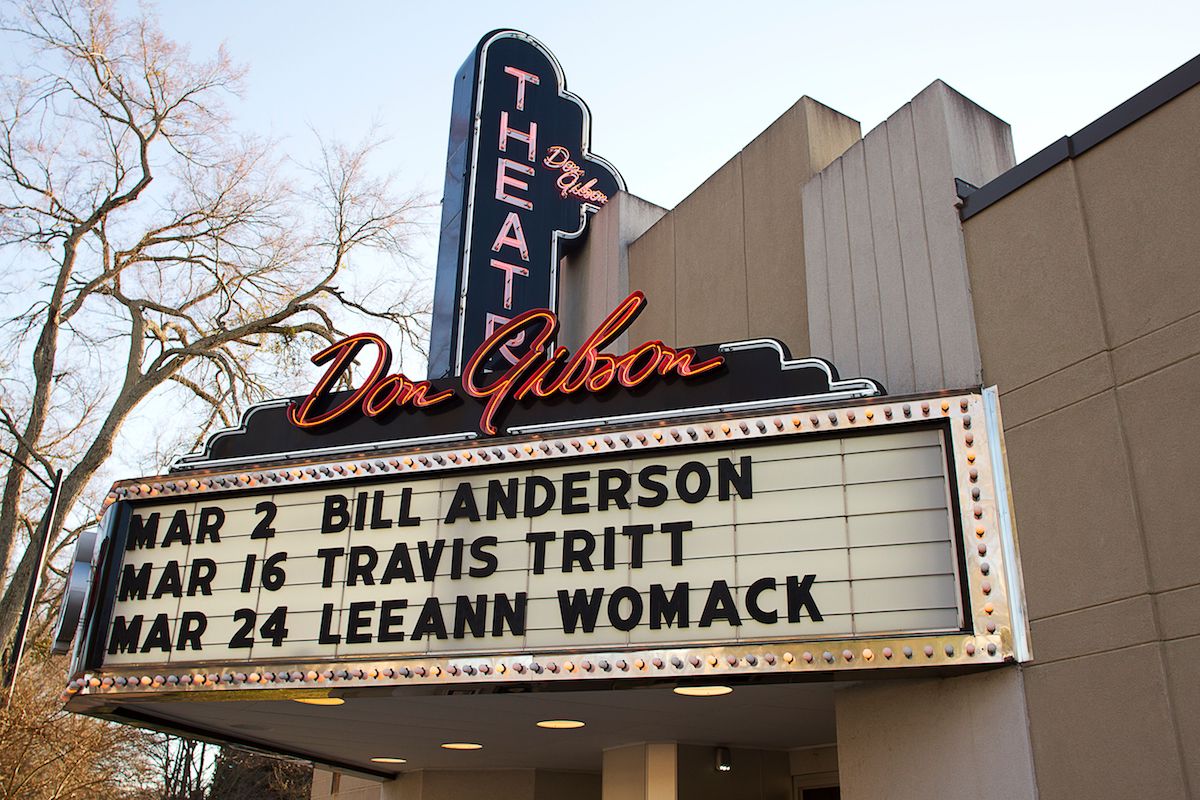 We spent a delightful evening enjoying “The Dancing Fleas Play the Music of Don Gibson.” For the uninitiated like us, the Dancing Fleas are a 10-member, ukulele party band. Their loyal following cheered and whooped their approval during the show.

We also learned about the North Carolina Musicians Mural Project, which honors both Scruggs and Gibson. A 30-foot, black-and-white depiction of a young Earl Scruggs with banjo and an enigmatic smile mural covers much of the Newgrass Brewing Company’s exterior gray brick wall. Likewise, the Don Gibson mural smiled back at us just a couple of blocks up the street. Both are the work of artist Scott Nurkin of The Mural Shop in Chapel Hill, North Carolina. 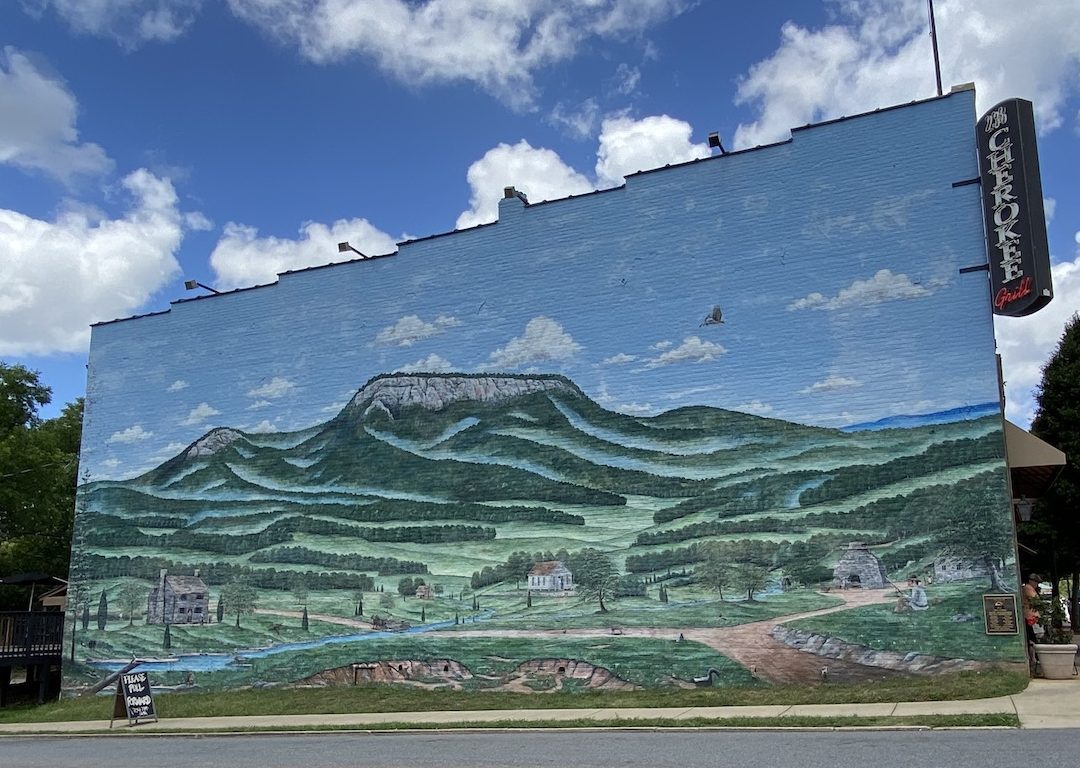 In Kings Mountain, we learned about the Joy Performance Center’s two-hour production, “Liberty Mountain: The Revolutionary Drama.” Unfortunately, the immersive experience was on hiatus during our visit due to COVID protocols. But, plans are underway for a Summer 2022 reopening, says director Jim Champion, who provided an overview of the story.

This historical drama by playwright and novelist Robert Inman shares the story of the hardy, resourceful people who settled the Carolinas and their crucial role in the American Revolution. The actual Battle of Kings Mountain was pivotal to the ultimate outcome of the war. 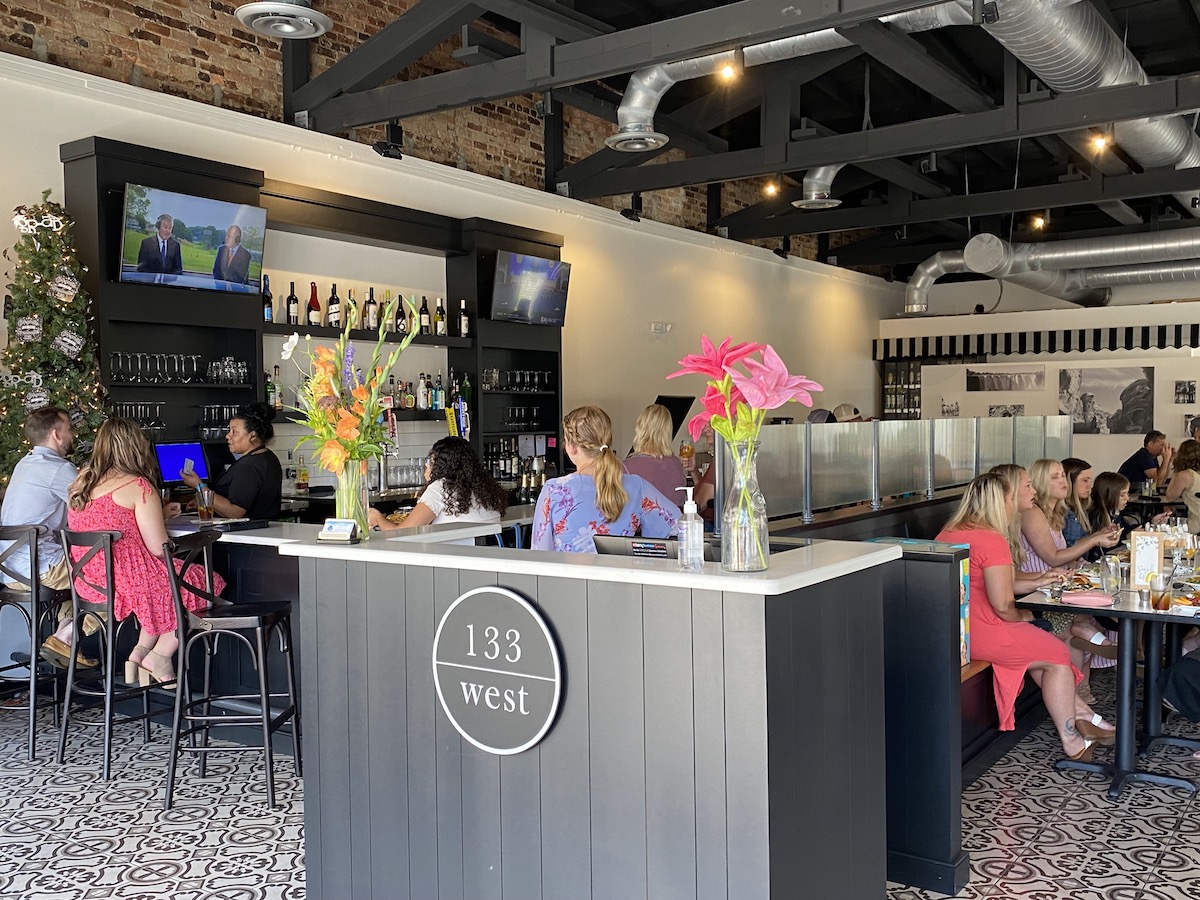 Prior to visiting Kings Mountain, we tasted the offerings from Newgrass Brewing Company. At Kings Mountain, we sampled a delicious brunch at 133 West, while getting schooled in the art of livermush. This Western North Carolina staple blends ground pork with liver and spices. Many enjoy it for breakfast as a side to eggs or in a sandwich. Grocers sell it in brick-like blocks; cooks slice and fry it. Shelby’s three-plus-decades-old North Carolina Liver Mush Festival occurs in late October.

Many visitors are looking for that barbecue fix, and they’ll get it at The Honey Hog Restaurant. This restaurant in Lawndale even has its own pastures. Famous for pulled pork and brisket, the spot’s also known for fried cheese curd.

Winding down at a local winery 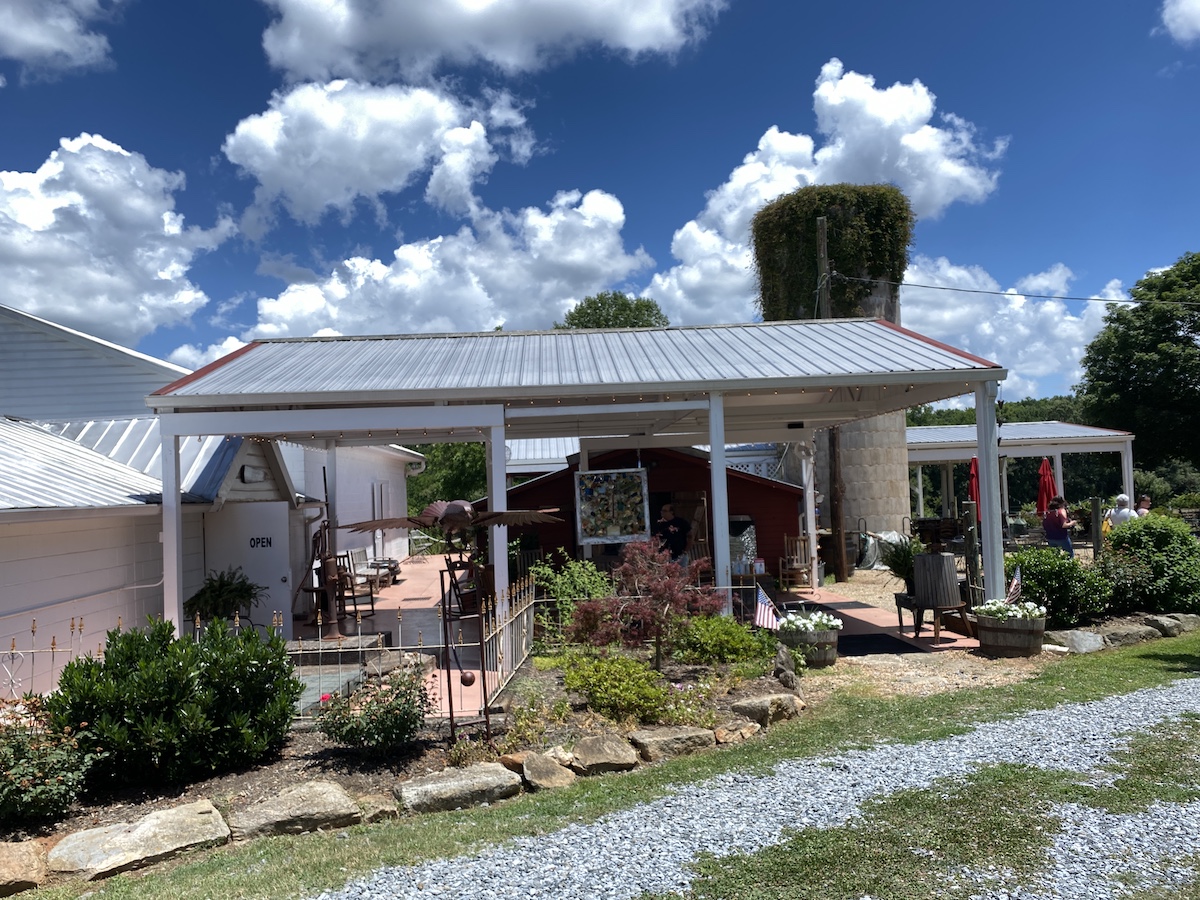 We met winemakers Charles and Ann Edwards on a busy Sunday afternoon at Baker Buffalo Creek Vineyard and Winery in the community of Lawndale on winding Fallston-Waco Road.

The couple opened their operation in 2009 with 15 vines from the New York Finger Lakes region. They knew little about making wine, but Charles took a course on the subject, and they powered on after initially planting in the wrong place. Their goal of “just keeping the farm going” means producing about 1,000 cases a year. Charles runs the manual corker in the bottling room and, it seems, just about everything else. Their best seller, Mule Barn Red, nods to the still-standing 1880s big red barn on the century-old farm.

During our visit, Ann and an assistant merrily handled the tasting room in the renovated milk house. Our tour revealed a tranquil outdoor wedding spot with old church pews, plus an old mule barn used for special events. After reading about past events, we thought a murder-mystery dinner might make a good reason to return for another perfect weekend in Shelby, North Carolina.

That and seeing Liberty Mountain: The Revolutionary Drama. And more time to enjoy live music and a deeper dive into Carolina’s Land of Rhythm and Roots.

Disclosure: The authors were hosted by Cleveland County, North Carolina.

For more on Shelby and Cleveland County, North Carolina, visit Land of Rhythm. 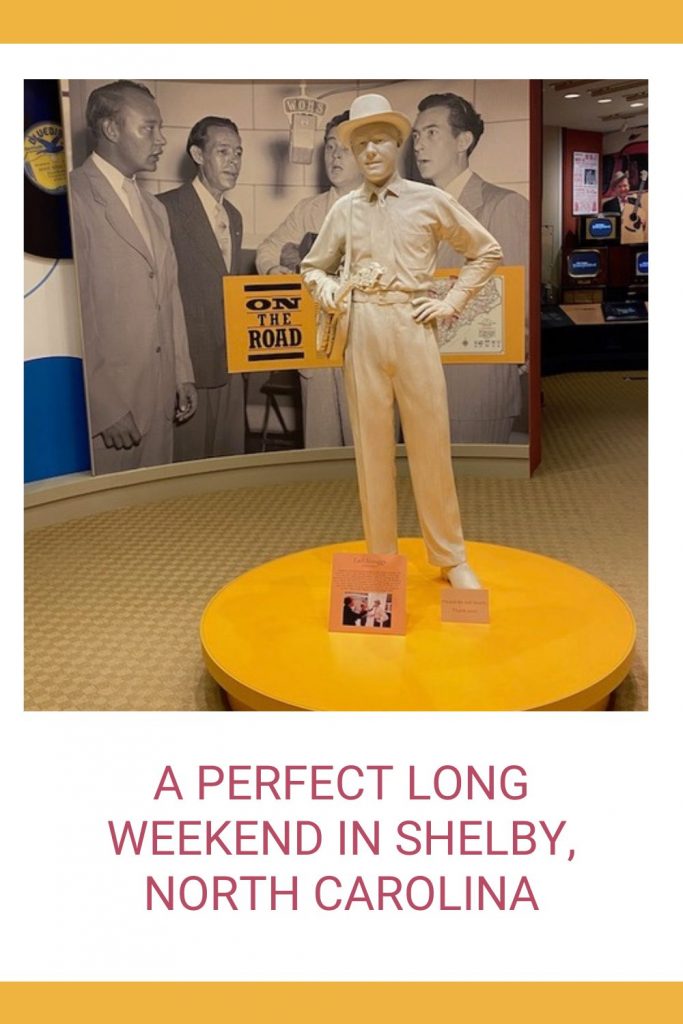