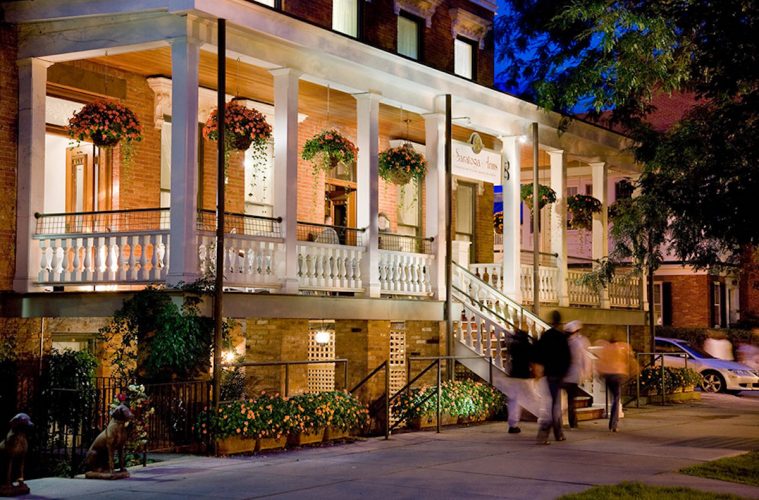 Historic Saratoga Springs entices visitors with a lively arts scene, classical architecture, mineral spas, lush parks, an iconic horse racetrack, and an array of fine dining and drinking establishments, making it ideal for a long weekend getaway. And, it’s easily accessible. It’s sited on I-87, 30 miles north of New York’s capital city, Albany, and also has an Amtrak train station and a local airport for private planes and jets. My husband, Warren, and I live a few hours south of Saratoga Springs and have visited it on four different long weekends over the years.

Saratoga Springs isn’t located in the mountains or on a big lake (although it’s only 30 minutes south of beauteous Lake George), what are its big draws? The city’s slogan says it all: Health, History, Horses.

Since the mid-1800s, people have traveled to this small city for their health, taking baths in and drinking from the area’s many springs—the only naturally carbonated mineral springs east of the Rocky Mountains. In the 21st century, people are more likely to get massages or facials at the local spas than bathe in the mineral waters, but the option is still available.

History buffs can wallow in the classic architecture and museums telling the story of the city’s fame as a Revolutionary War battlefield and a wealthy Victorian spa city. In the summer, horse lovers flock to the historic Saratoga Race Course, which has been hosting thoroughbred races for 160 summers.

Visitors also come to enjoy the performing arts. Saratoga Springs is the summer home of the New York City Ballet and the Philadelphia Orchestra. It also hosts a wide variety of classical, pop, and jazz music festivals at the multi-venue Saratoga Performing Arts Center. Those with a literary bent may want to sneak a peek of the famous Yaddo writers/composers’ colony, located in a 40-acre Adirondack-style estate just outside downtown (Check to see if it is offering garden tours).

A town made for walking

Self-guided walking tours abound in this scenic town. Stroll down Saratoga Springs’ Broadway Historic District, the mile-long central thoroughfare once named one of the nation’s top main streets by USA Today. Then, head a few blocks south on Broadway to manicured Congress Park, the 32-acre town green created back in the 1800s to showcase the town’s famous mineral fountains. The water is drinkable if you like metallic carbonated water. Leafy Congress Park has winding paths, ponds, a bandstand, the historic Canfield Casino, and a classic merry-go-round. 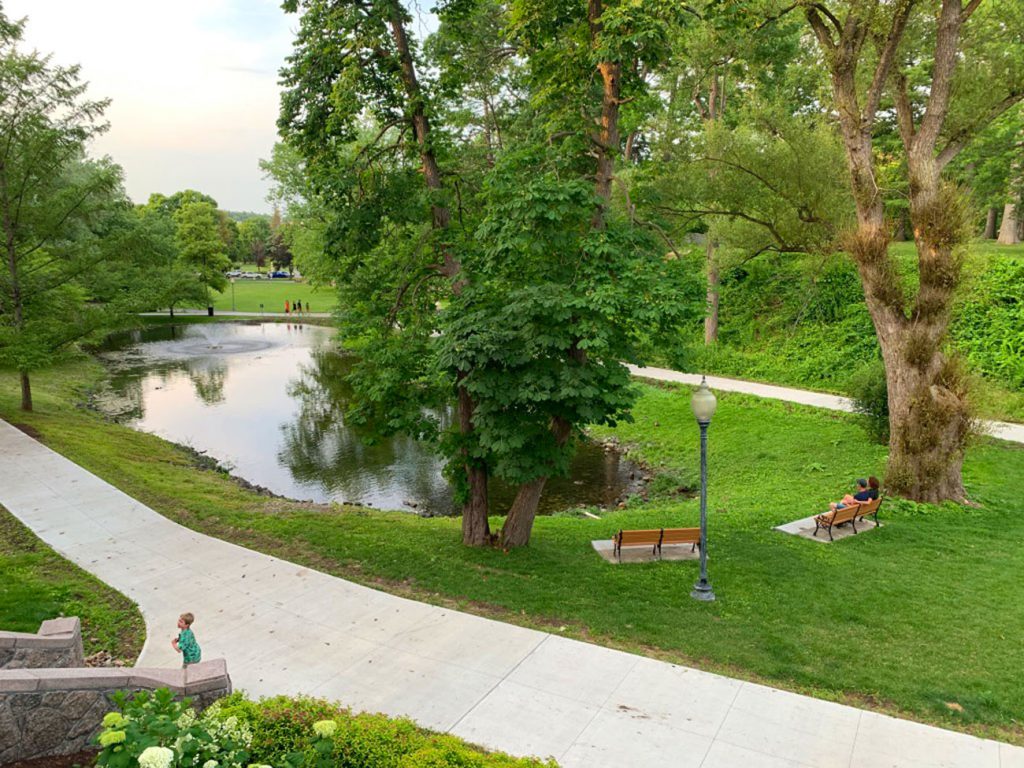 Head north on Broadway past the commercial district, and you’ll come upon blocks of immaculate turn-of-the-century garden mansions (many flaunting horse racing motifs) lining the road leading to Skidmore College.

One of the many garden Victorians on the road leading to Skidmore College.

The fledgling Beekman Street Arts District, where artisans and galleries have set up shop in older homes, lies a few blocks behind the center of town. And if you like guided tours, check out the Saratoga Springs Ghost Tours, a history ramble through lovely nighttime Saratoga among the ghosts of yesteryear.

Semi-spooky tales of yesteryear’s Saratoga Springs during the Ghost Tour.

A whole afternoon could also be whiled away at 2,400-acre Saratoga Spa State Park, an 8-minute car ride from downtown Saratoga. Pastimes here include walking and biking trails, a golf course, a large Victorian-era public swimming pool, the grand Gideon Putnam Hotel, the Saratoga Performing Arts Center (SPAC), the National Museum of Dance, and a wonderful classic car museum sprinkled among the many grand bathhouses from Saratoga’s heyday as Spa City. 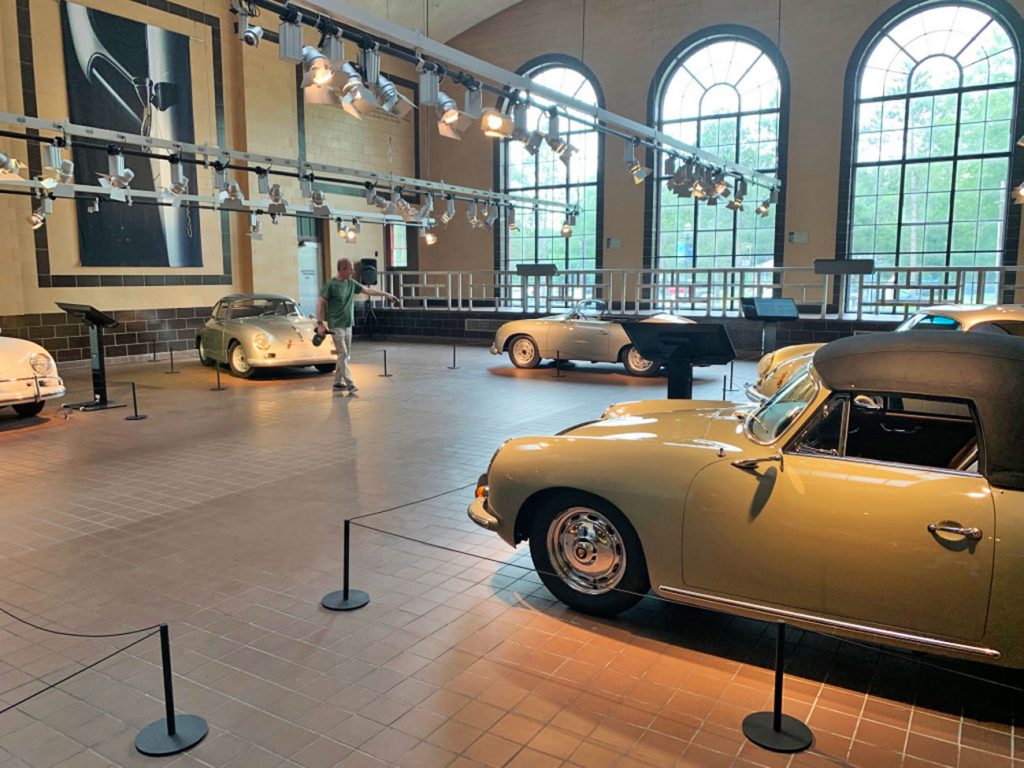 A classic Porsche exhibit at the Saratoga Automobile Museum,  located in a former mineral-water bottling building.

While my husband and I have sampled many of the above attractions (haven’t made it to the horse races yet, though), Saratoga’s big weekend draw for us has been its leisurely window-shopping and dining options.

The commercial part of Broadway offers a wide range of restaurants, boutiques, wine bars, brewpubs, coffeehouses, art galleries, bookstores, and yes, a souvenir shop or two. Years ago, Warren bought me my first “keeper” necklace, made by one of 40 featured artists featured at the handmade jewelry boutique Silverado. We were happy to notice recently that the shop is still going strong years later.

New restaurants we recently enjoyed on Broadway include a European-flavored brunch at Merc Kitchen and Bar and the fresh Mexican food of Cantina. Just off Broadway are Seneca, with its creatively rustic American cuisine from a CIA-trained chef, and Tatu Tacos & Tequila, an arrestingly-designed loft-style restaurant featuring Mayan-inspired craft tacos and drinks; don’t miss the churro waffle and ice cream dessert. 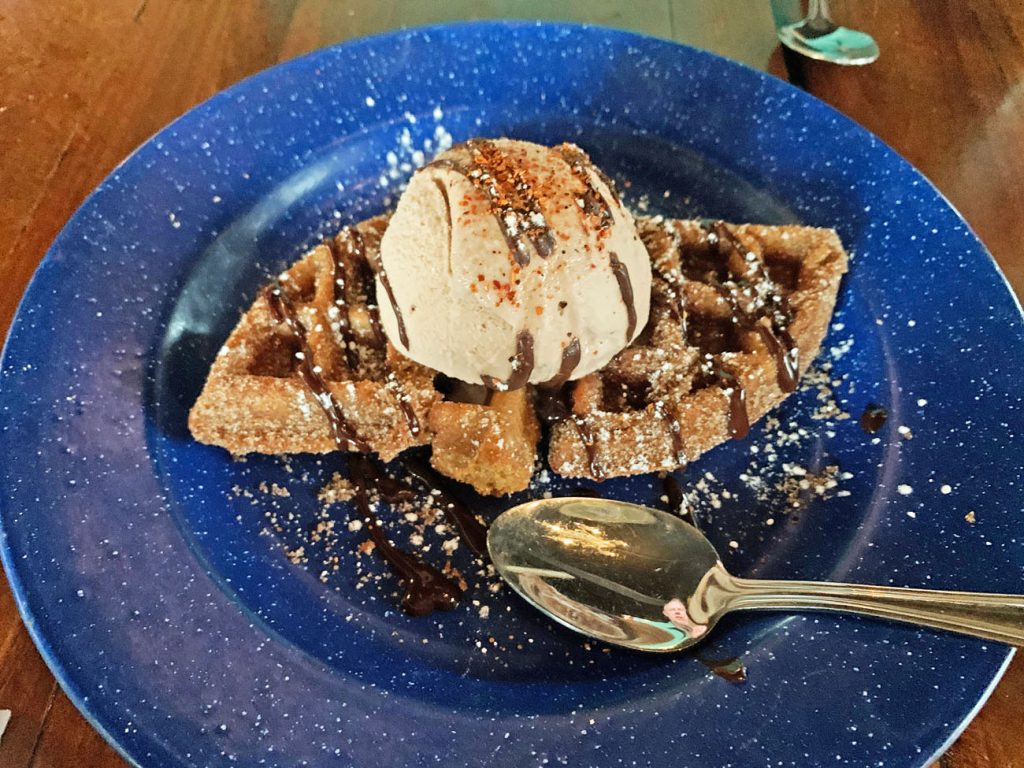 Where to stay in Saratoga Springs

Interesting accommodations abound for those planning a long weekend in Saratoga Springs. The city offers myriad lodging, from luxury hotels to mid-century roadside motels, along with an assortment of classy B&Bs and sleek Airbnb apartments.

My husband and I tend to like exploring a place on foot and then collapsing at our nearby hotel. If you like that, too, the following three hotels are located right on historic Broadway.

The 4-star Saratoga Arms is a lovingly restored 1870 Second Empire brick hotel on Broadway’s quieter north end. We stayed here in 2006, just after it had completed a new addition, increasing its number of rooms and suites to 31. The hotel is beautifully maintained and decorated, with an upscale, club-like feeling due to all its antiques and artwork. I appreciated the hotel’s complimentary guest pantry, farm-to-table gourmet breakfast, wrap-around front porch, and friendly staff. 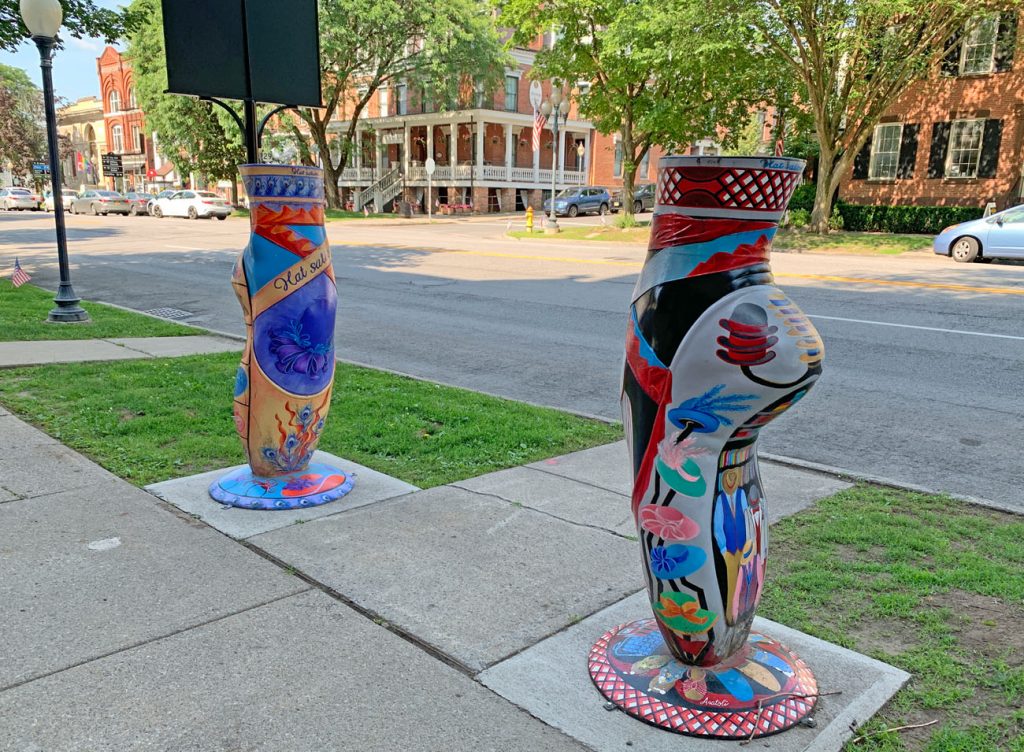 Two-for-one: a close-up of classy street art on Broadway with the Saratoga Arms hotel’s wraparound porch in the background.

At the turn of the last century, Saratoga Springs was known for its massive hotels catering to the hordes of rich folk looking to get away to a fancy spa town and racecourse. Those vast Golden Age grand dames are long gone, but the late 19th-century Italianate Adelphi Hotel (another 4-star hotel) gives you a glimpse of those statelier days.

The original Adelphi was built in 1877 and still had a distinct Victorian atmosphere (think “brown”) when we stayed there years ago. Today’s brighter, entirely renovated (to the tune of $30+ million) version of the Adelphi offers 32 spiffy soundproofed rooms and suites, with radiant floor heating, deep soaking tubs, and other luxury amenities.

We recently enjoyed cocktails on the Adelphi’s Morrissey Lounge and Bistro’s patio on a summery Saturday night and watched as a dressed-up wedding party waltzed out the door carrying huge bouquets of flowers. Perhaps they were coming from the Adelphi’s Blue Hen restaurant, known for its beautiful soaring glass atrium, but we didn’t have time to check it out. 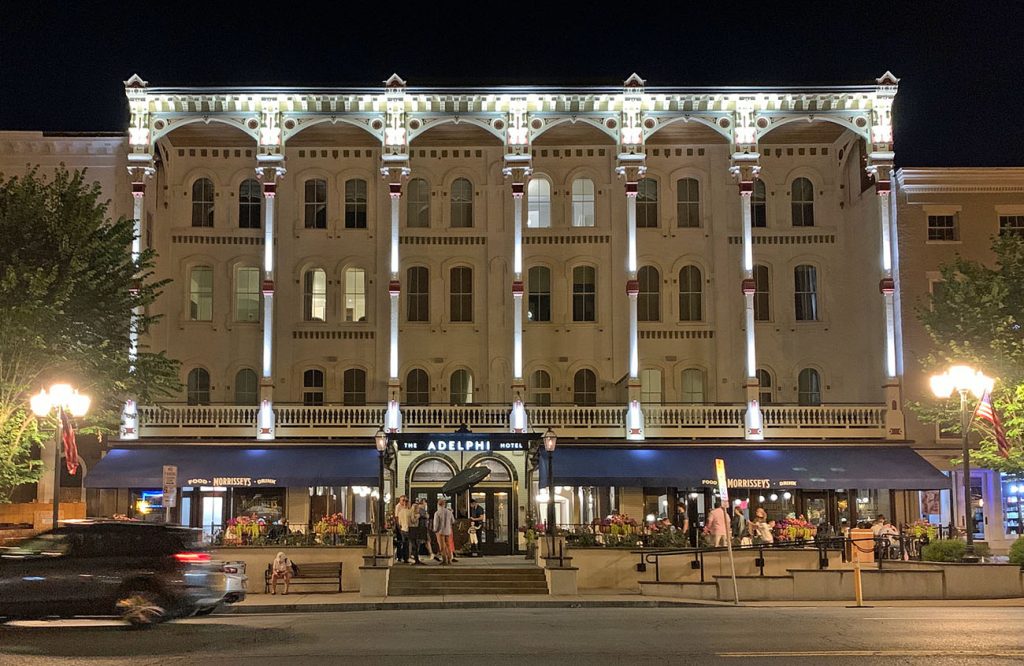 The Adelphi Hotel dressed up for a summer Saturday evening.

In 2021, we stayed at the brand-new Spa City Motor Lodge, a smartly updated take on the classic roadside lodging of yesteryear from Bluebird by Lark, a New England boutique-hotel developer. It’s probably the best-located of the town’s lodgings, right smack in the center of the historic Broadway mile, next to a wine bar, across from a bunch of stylish restaurants, and around the block from the town’s movie theater.

This upscale motel, with 42 rooms in 9 different styles, is aimed straight at family and friend groups—road-trippers looking for an in-town, stylish Saratoga experience without a huge price tag. 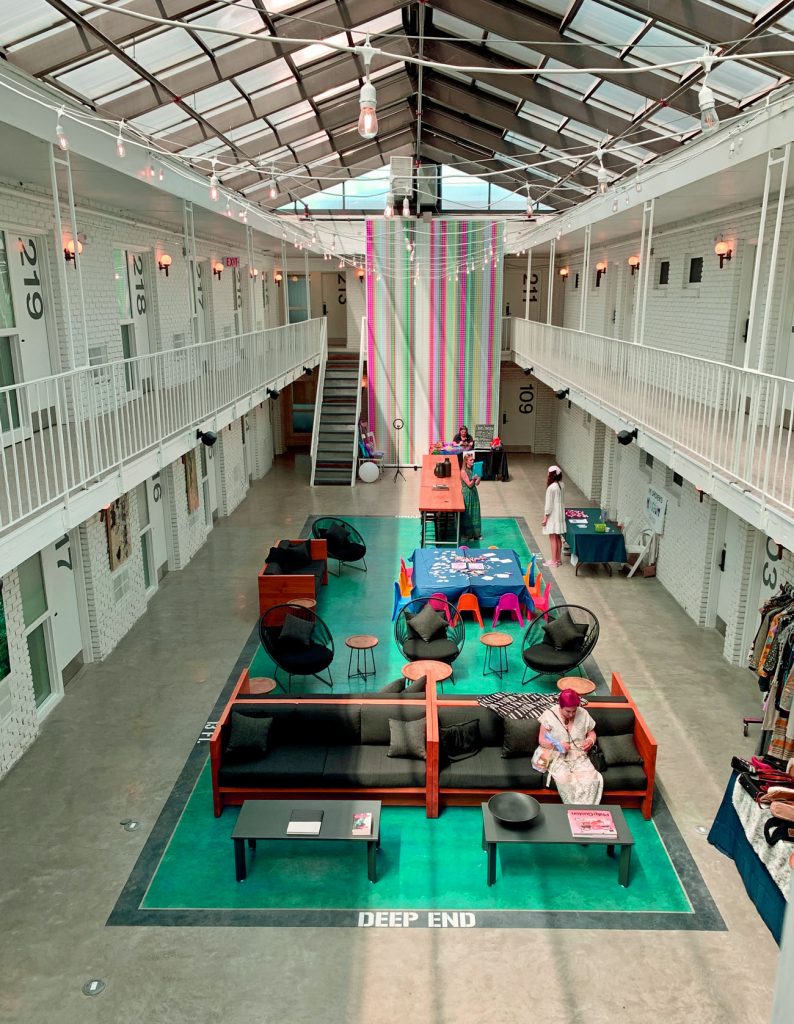 Finally, we can’t overlook the venerable 124-room, 80-year-old Gideon Putnam Spa and Resort (although we’d somehow missed it on our previous trips, oops). Surrounded by a golf course, repurposed classic spa bathhouses, and lots of Adirondack chairs, this hotel is located in Saratoga Spa State Park, a short drive from downtown.

On our most recent long weekend in Saratoga Springs, we toured the main level of this grand lodge, marveling at its wonderful public rooms with large fireplaces and its lovely grounds. We wished we’d been invited to a wedding or family reunion there just to soak up the luxurious feeling of yesteryear. 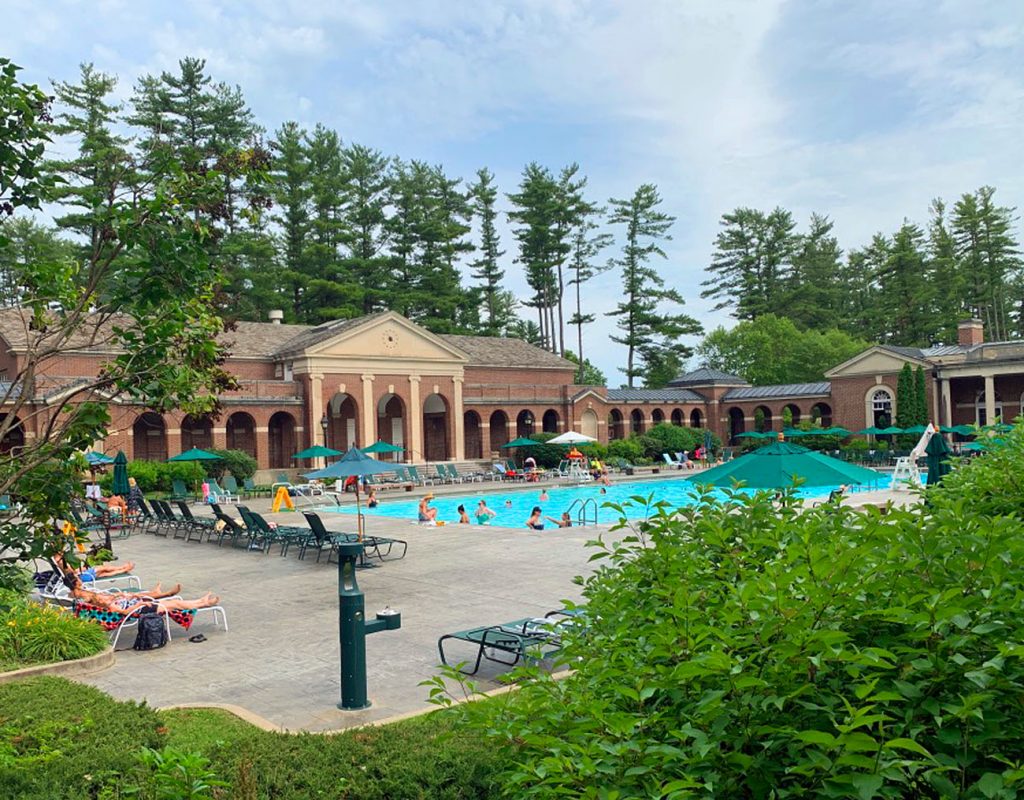 The park’s Victorian-era swimming pool is for Gideon Putnam guests and open to the public, as well.

Well, make that a very updated yesteryear. We learned that The Gideon Putnam suffered a catastrophic water-main break in winter 2018, but that incident had the silver lining of allowing the historic hotel to close long enough to modernize and freshen its rooms, making them more accessible while keeping the mid-century styling. 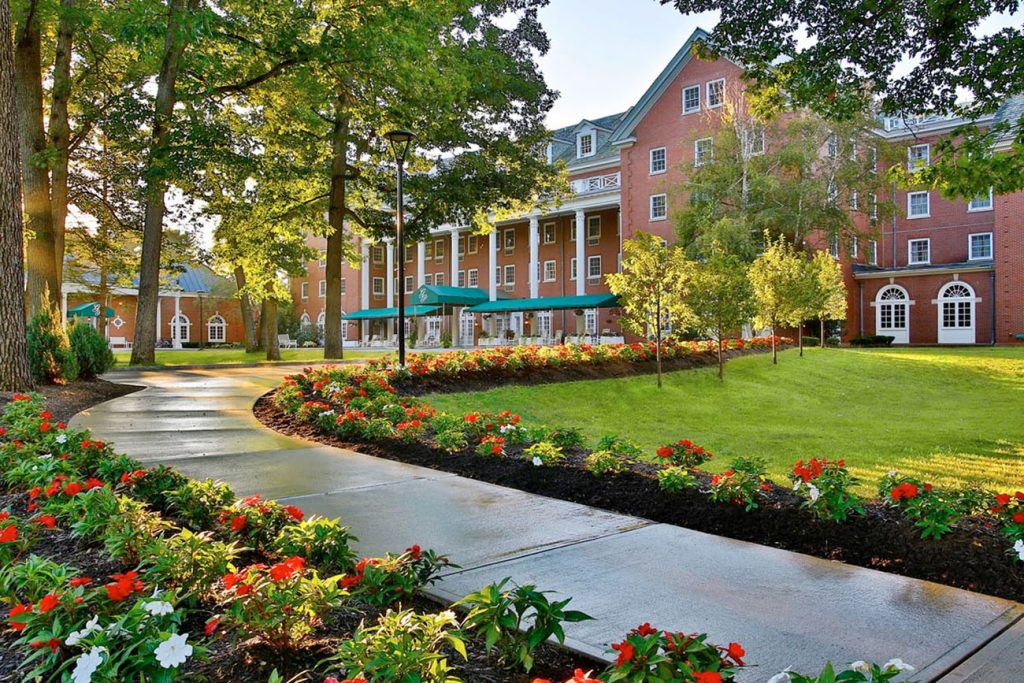 Summer is Saratoga’s prime season, of course, but The Gideon Putnam (located in Saratoga Spa State Park) makes the most of cooler seasons by serving a renowned Thanksgiving Grand Buffet and offering warm mineral baths at the Roosevelt Baths & Spa, which are still operating.

The bathhouse on the grounds was built in the 30s as part of President Franklin Roosevelt’s Great Depression public works program. And it was the visionary Roosevelt who set the stage for Saratoga Spring’s long-standing reputation as a place for healing.

For more information about spending a long weekend in Saratoga Springs:

If you want to add an interesting jaunt to your long weekend in Saratoga Springs, check out Rose Palmer’s post about Camp Sagamore, an Adirondack camp (and National Historic Landmark) fewer than two hours away from Saratoga Springs. 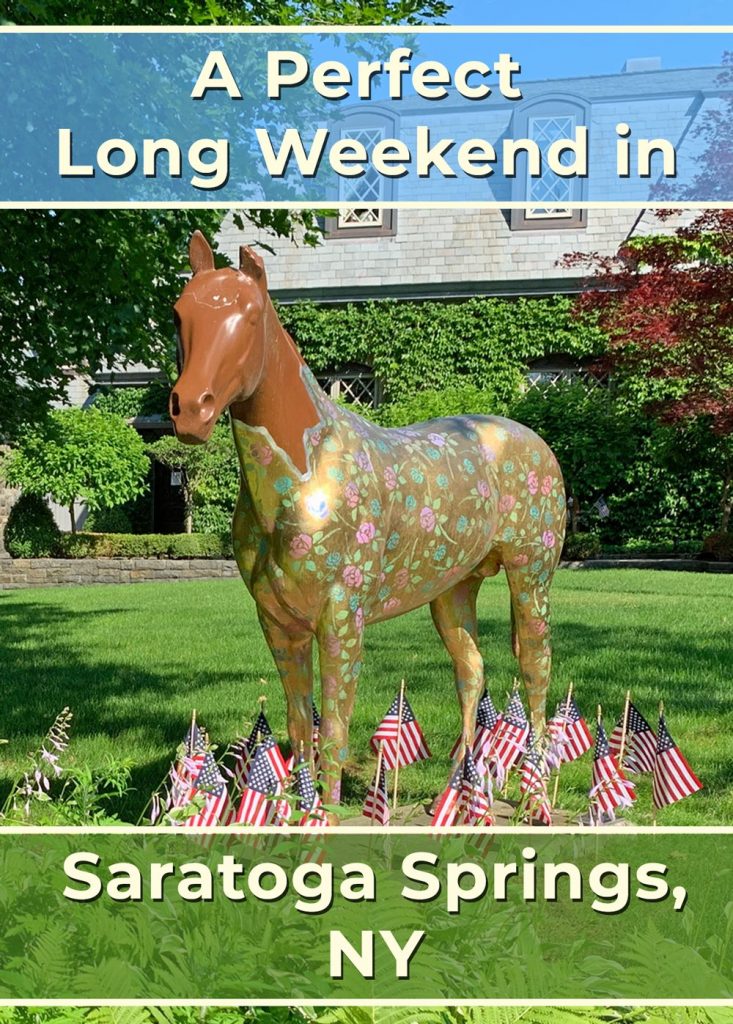