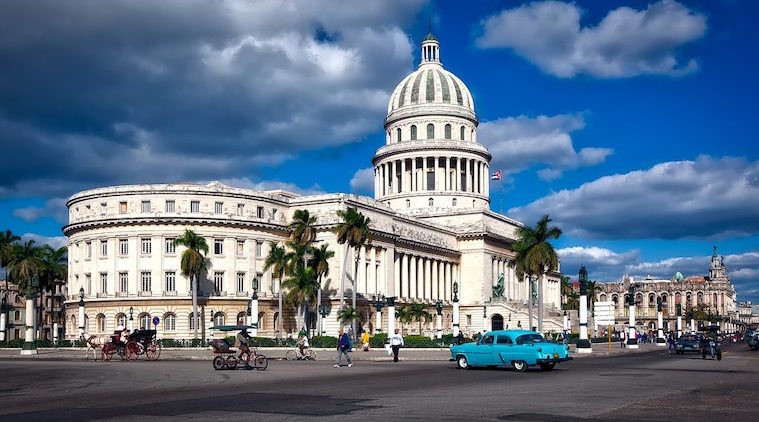 A Subjective Guide to the Best Experiences in Havana

At first glance, Old Havana (Habana Vieja) looks similar to many other imposing cities I’ve seen, with beautifully ornate edifices, historic churches, and impressive plazas on a par with anything you might see in Latin America’s most celebrated colonial towns or in the grand cities of Europe.

Cruise ships dock just steps from the old town, tourists sip mojitos and Cuba libres at hotel bars and outdoor restaurants, and there are plenty of shops offering the usual souvenirs, which in Cuba invariably means Che Guevara T-shirts, green berets emblazoned with a red star, Cuban rum and cigars, and crafts ranging from woodcarvings to jewelry.

But then there are the other things that are quintessential Havana, like the vintage Chevys, Fords, Cadillacs and Russian Ladas, mostly from the 1950s and buffed to a meticulous shine.

There are bici-taxis (pedicabs) and horse-drawn carriages as alternatives to taxis, and in summer the heat and humidity are so oppressive it’s hard to imagine that most Cubans live without air-conditioning.

Wander away from Old Havana into the neighboring Centro district, and you’re suddenly in a different world altogether, one that looks like it has yet to recover from a not-too-distant war. It’s a neighborhood of spectacular decay, with once-majestic colonial buildings now crumbling and dilapidated, some without roofs but somehow inhabited. Like the rest of Havana, it’s a neighborhood full of life, with shoeless boys playing soccer in the street, families walking dogs, old people hanging out on balconies, vendors selling cocoa butter and bread, and only occasionally a car rumbling past.

Walk along the nearby Malecón, Cuba’s famous seawall, and on one side is the crashing surf with its promenade of people from all walks of life, while on the other are ghosts of structures that look like they’ve been that way for decades.

Because Havana is such a vibrant city and yet so very poor, the city’s complicated characteristics aren’t easy to digest or reconcile. But whether you’re in Havana for only a day or two as part of a cruise or group tour, or have more time seeing Cuba on your own, this subjective list of the fascinating sights and best experiences in Havana can serve as a good introduction.

The Malecón, hands down. Stretching several miles from Habana Vieja to the well-to-do Vedado neighborhood, this seawall is like a breath of fresh air compared to tight quarters just inland, especially in the early evening when it also buzzes with families, fishermen, couples, musicians, vendors, and tourists.

Abandoned buildings on The Malecón

Reach it by strolling the park-like Paseo de Marti with its trees and benches and then turn left when you reach the water. If you want to look like a local, buy or bring a snack and join the others sitting on the seawall. Otherwise, there are several places to stop for a meal or drink along the Malecón, but I’m especially partial to Castropol for its great views of the waterfront promenade and for its succulent garlic octopus and other seafood. I prefer dining on the second-floor outdoor patio overlooking the water, except when it’s too hot and the air-conditioned dining room (a rarity in Cuba) comes as a welcome relief.

Plaza Vieja, the largest of three main squares in Habana Vieja, which was declared a UNESCO World Heritage site in 1982. Plaza Vieja is the historic heart of the city, where in addition to housing a former market, it served as the site of executions and bullfights. 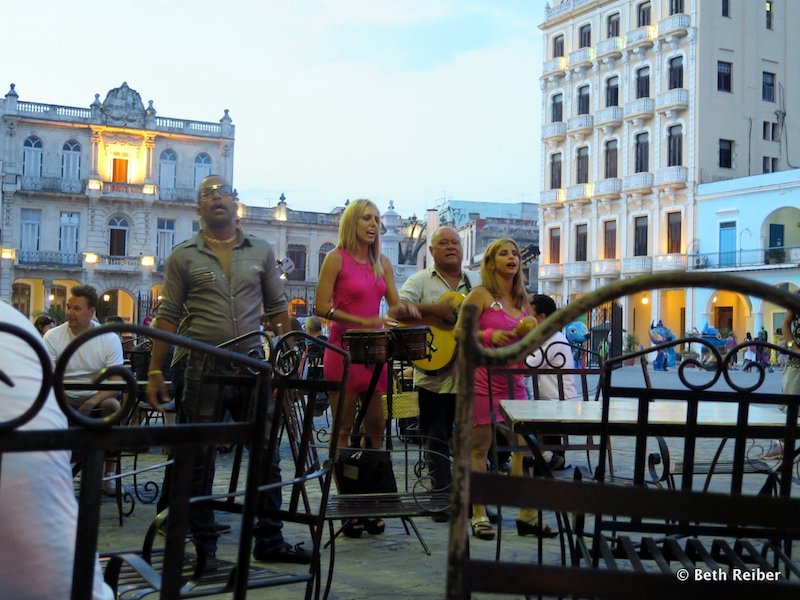 Many restaurants on Plaza Vieja have outdoor seating and musicians

Ringing the square are multi-storied, colonnaded buildings, housing upstairs residences and ground-floor shops and restaurants, some with outdoor seating and serenading musicians. Order drinks and an appetizer at Santo Angel, which boasts an excellent live band, or stop for a beer at Factoria Plaza Vieja, a microbrewery with outdoor tables.

HabanaBusTour, because it’s a hop-on-hop-off bus that offers an inexpensive (around US$10 for the day) way to get out of Vieja Habana to other parts of the city. It’s not sophisticated, and the audio speaker describing what you’re seeing may be barely audible. But the open-top, double-decker T1 route is interesting for its 105-minute passage through various neighborhoods, like the well-off Miramar and Vedado districts.

Otherwise, there aren’t many stops worth getting off the bus for, with the exception of Cementerio de Cristóbal Colón, Cuba’s most important cemetery and among the largest in the Americas. Located in Vedado and named after Christopher Columbus, it’s a virtual city within a city, divided into avenidas and calles lined with grandiose monuments made of marble, granite, and bronze and embellished with crosses, statues, cupolas, stained-glass windows and other architectural features.

Clearly, only the richest could afford to end up on the cemetery’s grandest avenue, with mausoleums designed to show off family wealth even in death.

More interesting are the modest mausoleums on the edges, making it worth paying a small sum for your own private English-speaking guide to the cemetery’s more illustrious graves, like that of Constante Ribalaigua Vert, friend of Ernest Hemingway and owner of Floridita, one of Hemingway’s favorite bars. Vert was considered a master mixer of daiquiris and other cocktails; bartenders pay homage by leaving drinks at his grave.

There’s also the grave of Amelia Goyri de Hoz, who died in childbirth in 1901 and was buried along with her stillborn child placed at her feet. According to our guide, when the grave was later exhumed and the baby was found in its mother’s arm, Amelia became as La Milagrosa, The Miraculous One. Her grave draws visitors from around the world who come to leave testimony and give thanks for the many miracles she has performed.

We’ve all seen photos of them: shiny vintage convertibles tooling around the streets of Havana. Because of the U.S. economic embargo placed on Cuba in the early 1960s, Cubans were forced to make do with what they had, lovingly keeping old Cadillacs, Chevys, Fords, and later Russian Ladas in working order.

You’ll find rows of the pink, teal, orange, blue, and other brightly colored vehicles parked along the rim of Old Havana’s Parque Central, with the going rate of about $35 and up an hour making them the most expensive transportation in the city. Still, most tourists can’t resist, though there are also horse-drawn carriages and—the poor man’s taxi—bici-taxis (pedicabs), ready to take you where you want to go. 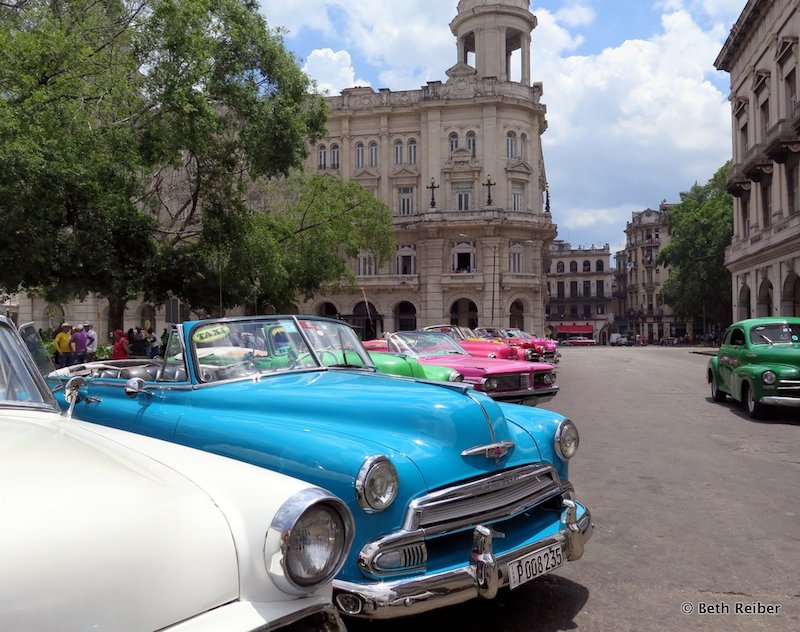 Almacenes San Jose is packed with artists selling their works

The Museo National de Belles Artes de Cuba, for its Cuban section devoted to local art from the 1800s through modern and contemporary works. I found it interesting not only because I knew nothing about Cuban artists, but also for the paintings depicting scenes from Cuban life long ago, like José Joaquin Tejada’s street scene of a crowd standing in front of a list of lottery winners. Although there’s also a section with works by artists from outside Cuba, from Europe, ancient Greece, Latin America, and more.

If you find yourself with an hour to spare, however, I’d head across the street to the Museo de la Revolucion. It occupies the former Presidential Palace where Fulgencio Batista lived until he was ousted by Fidel Castro, Che Guevara and other rebels. Today it pays tribute to the guerrilla fighters from the 1950s and onward, many of whom lost their lives or were imprisoned and tortured. Photographs, instruments of torture, and personal items, including Fidel’s binoculars and Che’s camera, are on display, along with caricatures of U.S. presidents, labeled as cretins. 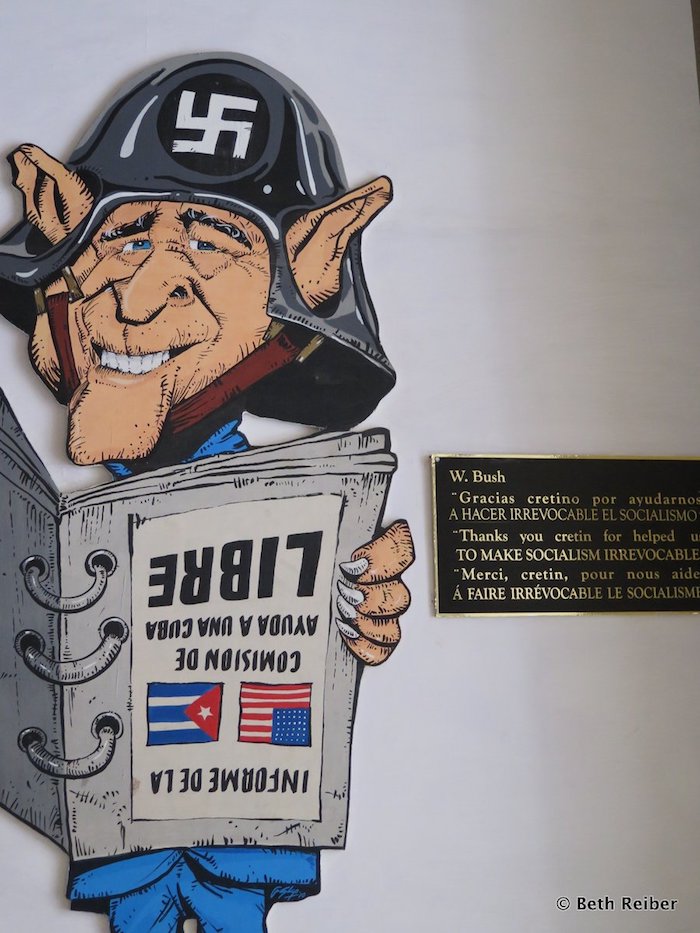 Obispo, Old Havana’s main shopping street. Off-limit to vehicles, it’s lined with stores and restaurants, including the very old Drogueria Johnson with its shelves of apothecary bottles. Although the food is only passable, my favorite restaurant on Obispo is Europa Café due to its old-timey atmosphere, cheap prices, and serenading musicians and dancers. 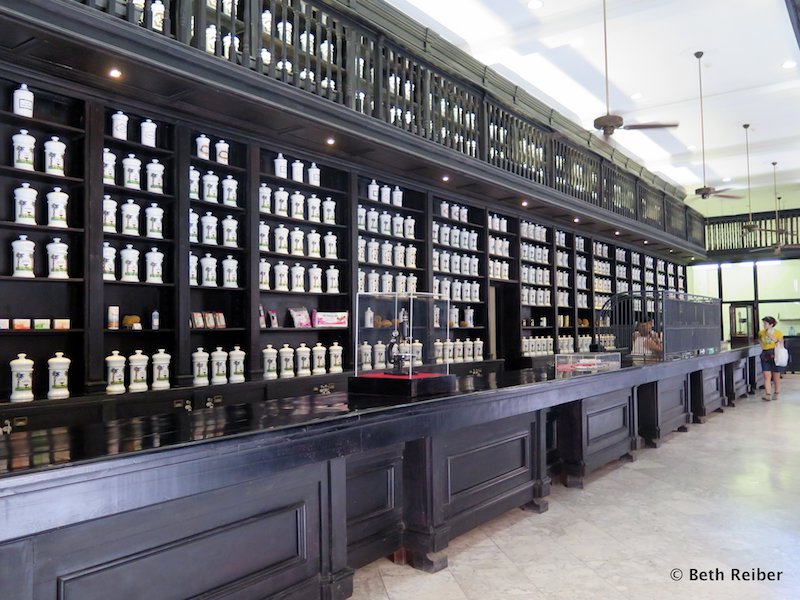 Relocating from one paradise to another (Key West to Cuba), Ernest Hemingway bought a house outside Havana in 1940 and lived there for 20 years. With his legendary drinking, it’s not surprising that several bars claim to be his favorite watering hole, including Floridita, which serves up daiquiris to busloads of tourists and pays tribute to the author with a statue of him sitting at the bar, and La Bodeguita Del Medio, a bit rougher around the edges. 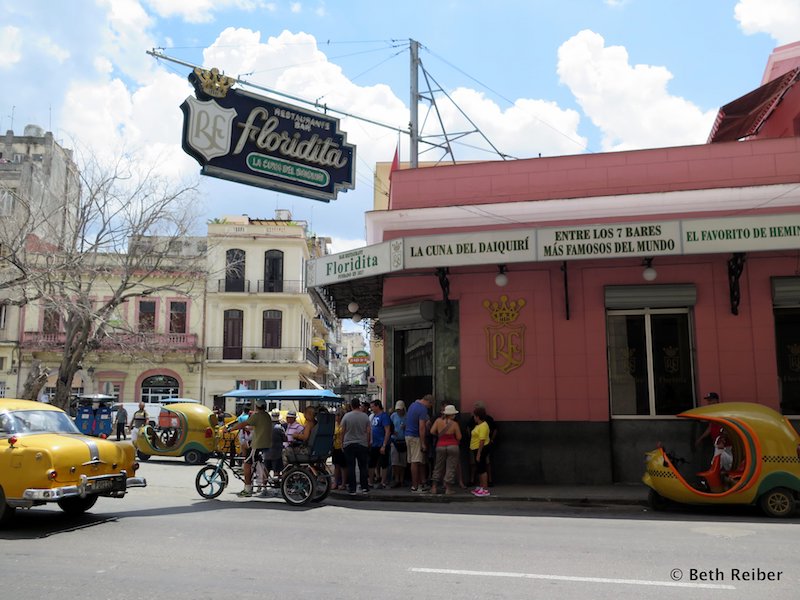 La Floridita, one of Ernest Hemingway’s favorite bars in Havana

But I’m partial to Hotel Ambos Mundo, not only because of its comfortable rooftop bar but because Hemingway actually lived here in the 1930s before buying his Cuban house. Photographs of Hemingway and memorabilia are spread throughout the hotel, including room 511 where the writer stayed, now a small museum.

A casa particular, the Cuban version of a bed and breakfast. Because incomes are universally low in Cuba (the owner of our casa particular in Havana makes the equivalent of about US$50 a month as a computer IT for an international company, but he was quick to point out that there are government subsidies, including free health care and education), renting a room in their private home is vital additional income for many families in Cuba, with rooms averaging $30 to $55 a night.

Although most homes in Cuba do not have air-conditioning, the casa particulars we stayed in had window units in our room, along with a private bathroom. Many will also provide meals, among the best food we had on the island, and it’s a great way to experience home life and learn about Cuba from your hosts.

Paladares, privately owned restaurants. Entrepreneurship is strong in Cuba, and nowhere is this more evident than in the many private restaurants that have sprung up all over the country. Because they’re small and concentrate on local favorites or just one type of cuisine, they serve dishes that are not only tasty but also inexpensive. My favorite in Havana is 5 Esquinas Trattoria, recommended by the family of our casa particular and offering outdoor seating and great pizzas.

Almacenes San Jose, filled with paintings and handicrafts by local articles. Although geared toward tourists pouring out of cruise ships docked next door, it’s a massive, covered hangar filled with everything from paintings of iconic Havana street scenes to woodcarvings, jewelry, refrigerator magnets and more. Many of the items are the same you’ll find elsewhere (bargaining is the name of the game), but if you want to purchase a painting or drawing directly from the artist, this is the place. 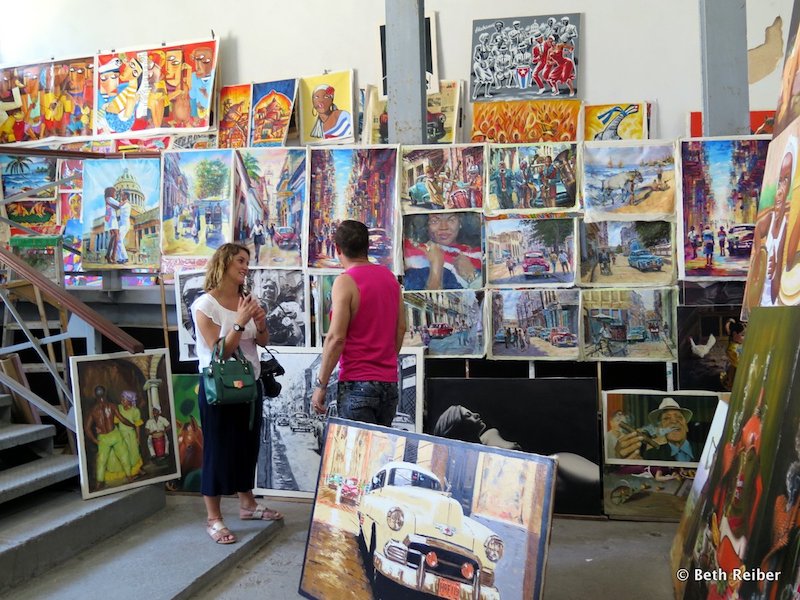 Almacenes San Jose is packed with artists selling their works

Best District for Seeing the other Side

Centro, just steps from Old Havana but a world apart. I recommend stopping at a paladare or buying a beer to consume on an outdoor chair and watching life go by. It’s a part of Havana few tourists see, and, like the rest of Cuba, is safe.

Truth be told, spending an evening here turned out to be my favorite night in the city. 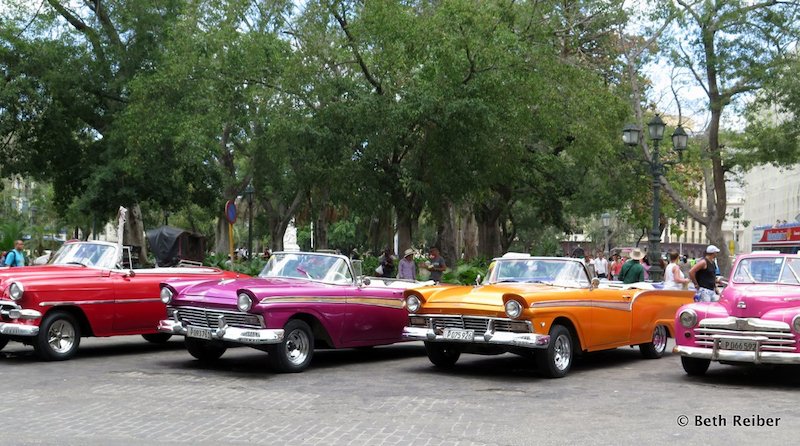 For more insight into what it’s like in Cuba, see the author’s article:

All photo credits except for lead photo: Beth Reiber 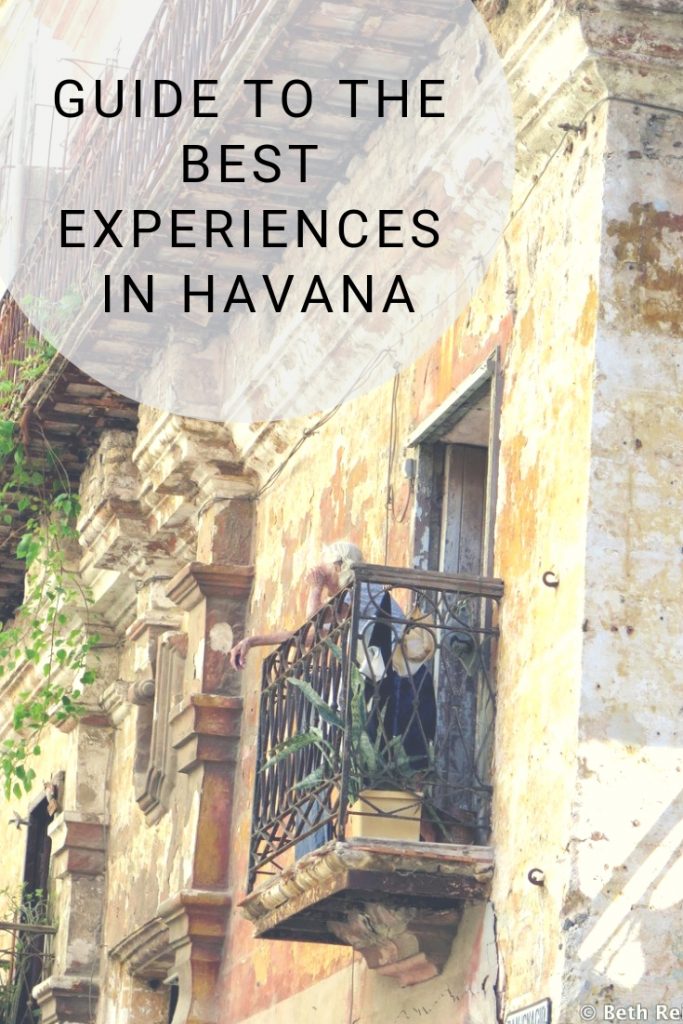