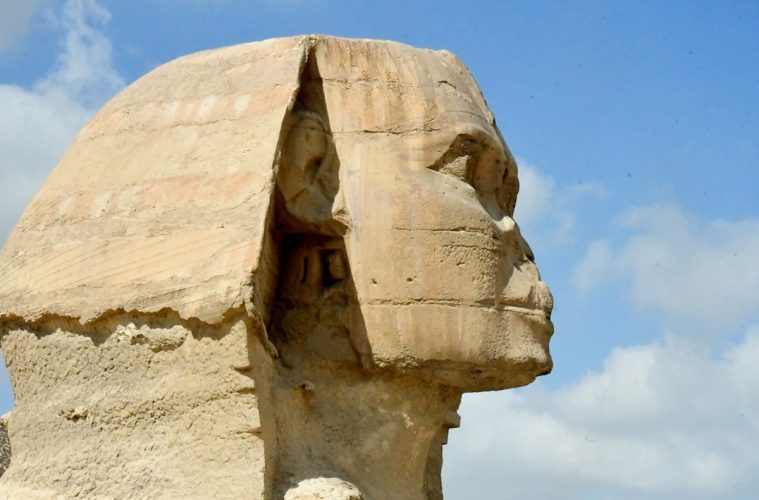 A ‘Death on the Nile’ Cruise: Agatha Christie and Me

With Disney’s lavish production of “Death on the Nile” poised to hit theaters, I suspect that a new generation of mystery buffs will be whisked away to magical Egypt, a land that not only capitalizes on its mythology and history but also revels in it.

Although Agatha Christie’s fictional travels seem to have been always fraught with mayhem and murder, there can be no argument that the Queen of Crime certainly knew how to pick luxurious and romantic destinations. 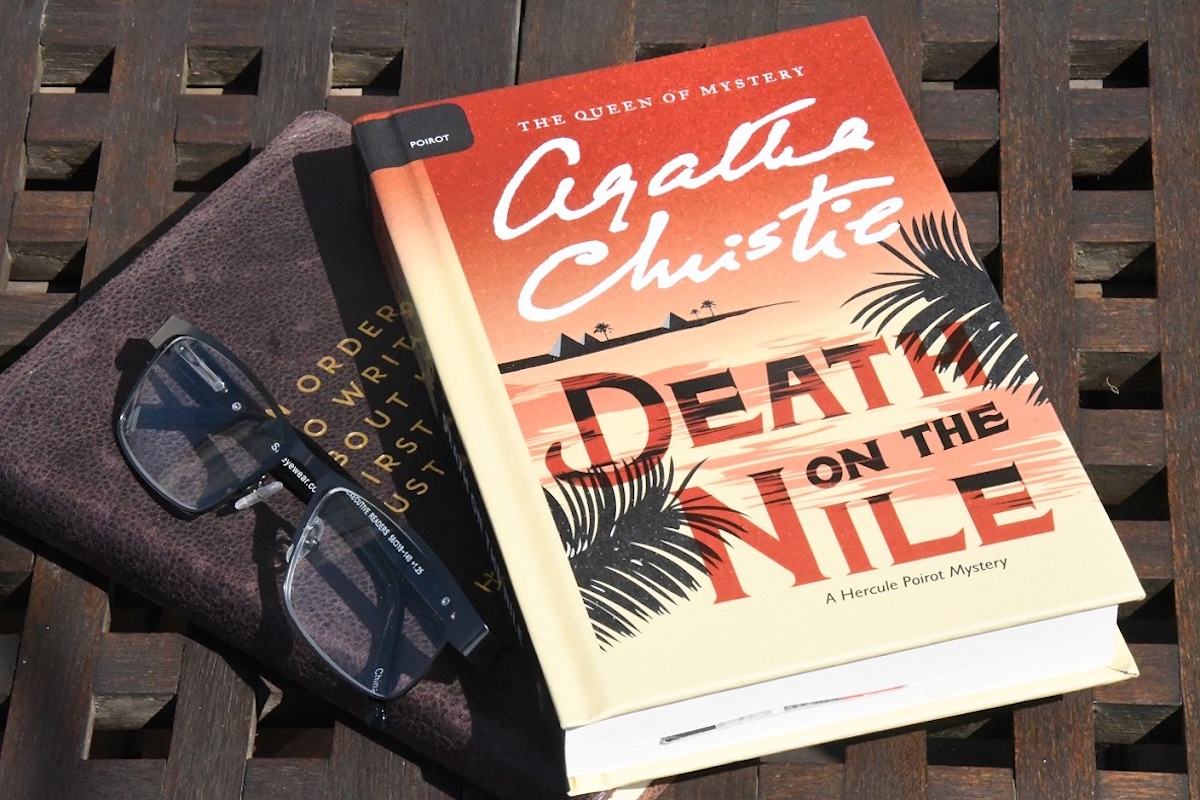 Agatha Christie`s classic 1937 mystery, Death on the Nile, is the perfect read when cruising the epic river.

Just before the pandemic closed most international borders, I was able to take a Death on the Nile cruise, which admittedly, wasn’t out of character. I had been seduced by this ancient land ever since I read Agatha Christie’s mysteries as a teenager and watched earlier film adaptations of this thriller. In it, her famous detective Hercule Poirot’s Egyptian vacation aboard the glamorous river steamer Karnak turns into a terrifying search for a murderer when a picture-perfect couple’s idyllic honeymoon is tragically cut short.

So I found myself in Egypt on a tour with Scenic Luxury Cruises and Tours – a tour I like to call “Agatha Christie and Me.” I had brought along an old, dog-eared copy of her 1937 novel, and yearned for the same mystery while on my journey.

The elements were certainly all in place. We had an exotic setting, a cruise through the ancient land of the Pharaohs, a small, isolated group of colorful characters, a great detective (that would be me by-the-way), and, I hoped, at least one murderer in our midst.

In the shadow of the pyramids 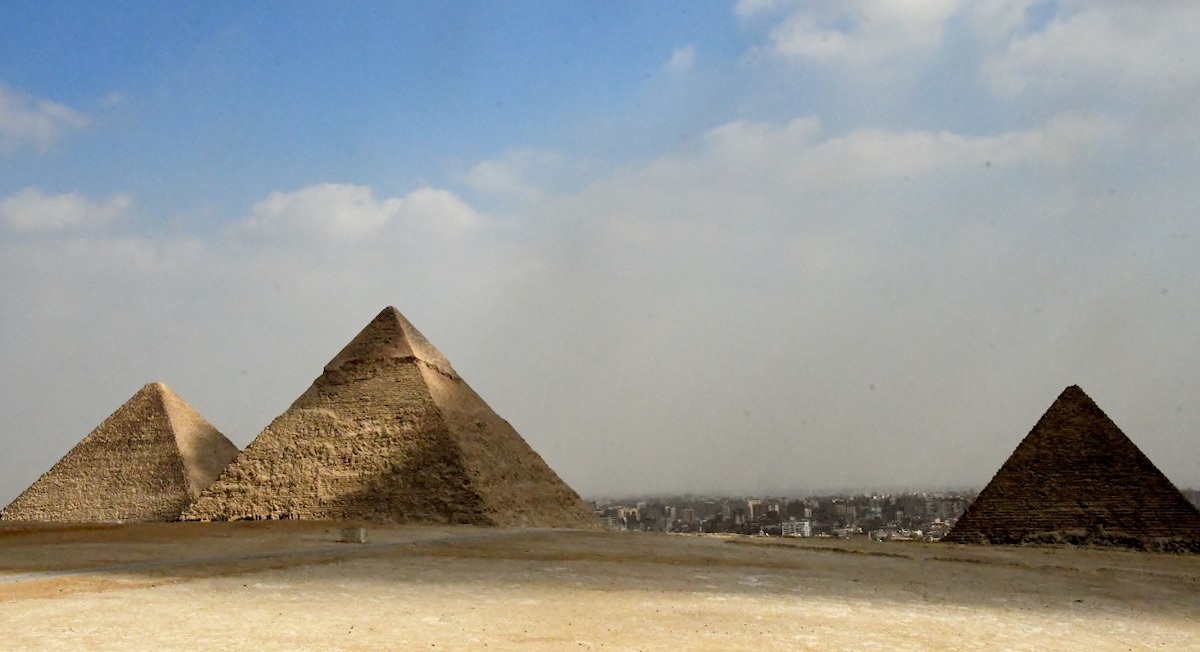 The pyramids of Khufu, Khafre, and Menkaure rise above the desert sands on the Giza plateau.

While Christie’s characters boarded their fateful cruise in Egypt’s southernmost city of Aswan, for my 12-day Egyptian journey on a Scenic Death on the Nile cruise, our group of twenty-four had gathered at the Marriott Mena House on the edge of the expansive city of Cairo.

As a backdrop to the hotel, on the dusty Giza plateau, the pyramids of Khufu, Khafre, and Menkaure, Egypt’s monuments to death and eternity, rose above the desert sands. The small size of our  Scenic tour group would allow me to unsuspiciously survey my fellow travellers, making  it easier to pick out a murderer. Channelling my inner Detective Hercule Poirot while appraising each guest, I reminded myself that every passenger has a motive, and every suspect has a secret!

My Egyptian adventure would take me from Cairo, with its pyramids, Sphinx, and fascinating Egyptian Museum, to the vibrant city of Luxor via a short flight. Previously known as Thebes, this ancient city was once the capital, and it remains a striking testimony to Egyptian civilization at its height. 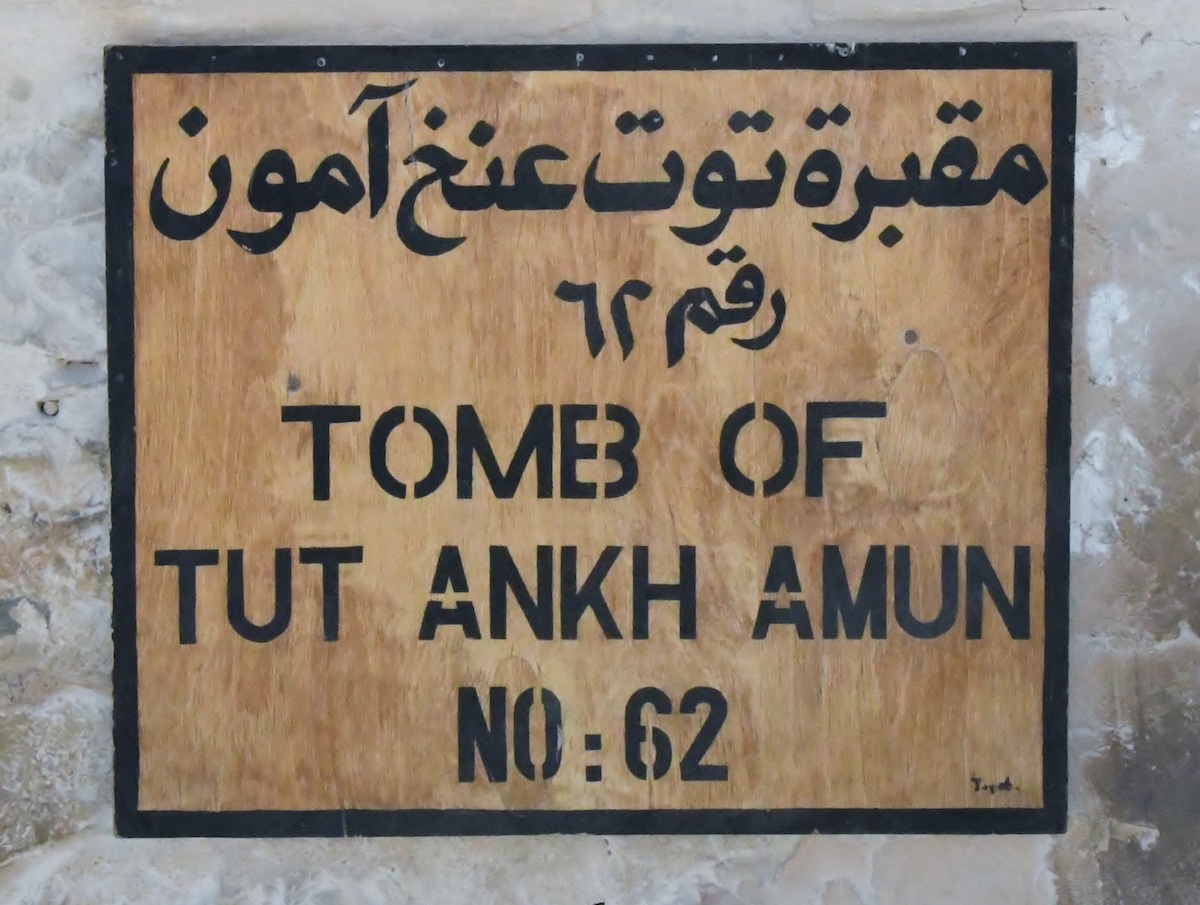 The tomb of King Tutankhamun, discovered in 1922, can be explored in the Valley of the Kings.

Before our Death on the Nile cruise even began, we visited the awe-inspiring temples of Karnak and Luxor and  enjoyed a hot-air balloon ride over the harsh desert and lush plains that hedge the river. And, we ferried across the Nile to explore the Temple of the remarkable Egyptian Queen Hatshepsut beneath the cliffs of Deir el Bahri and the necropolises in the Valley of the Kings. Of course, we also descended into the tomb of King Tutankhamun, discovered here intact in 1922, to visit his mummy. Since I wanted to follow the plot line of “Death on the Nile” and not the horror classic “The Mummy,” I knew it was time to get onto the river.

Setting off on a Death on the Nile Cruise 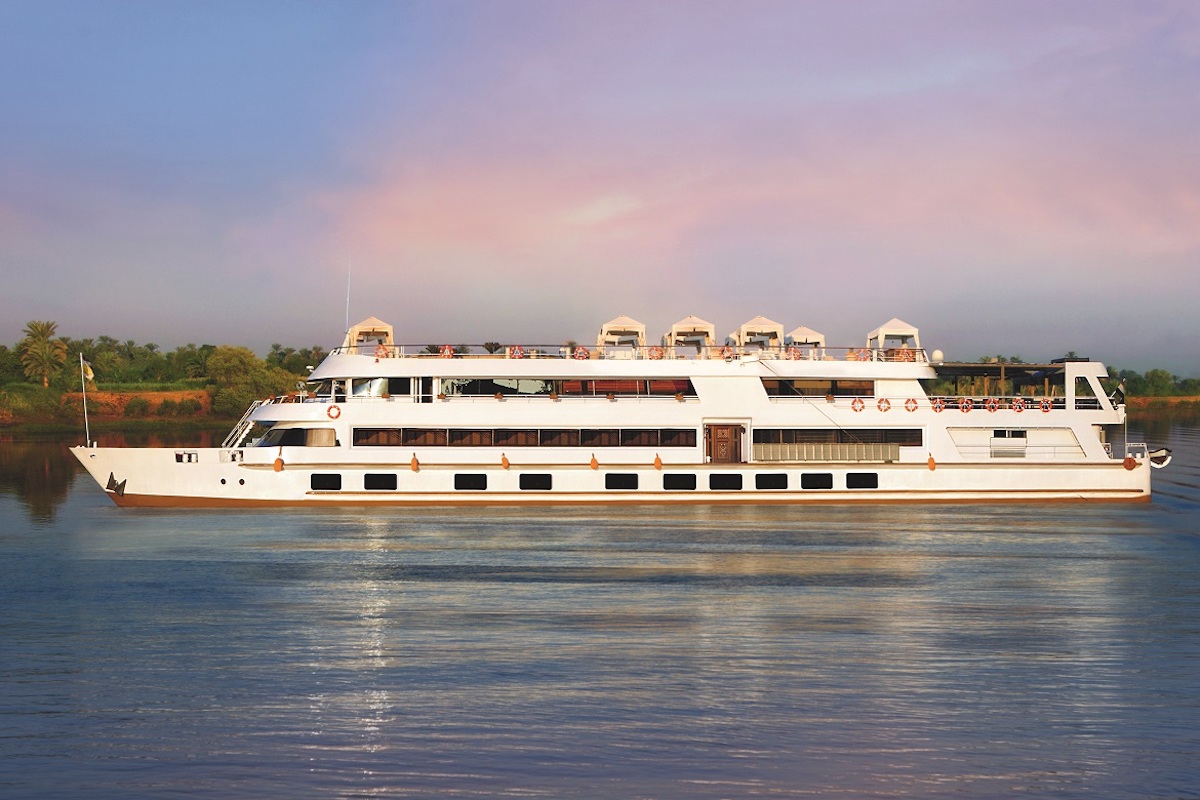 A Death on the Nile cruise along the river remains the best way to explore Egypt in full Agatha Christie style. From Luxor, our tour group set off on a four-day, 145-mile trip south to Aswan, not on Christie’s fictional paddle-wheeler Karnak, but on Scenic Cruise’s beautiful Sanctuary Sunboat III, a small, shallow-draft vessel able to reach moorings that many larger river cruisers could not.

As our elegant vessel’s lines were released and we slipped quietly into the current, dozens of white egrets lifted from the riverbanks filling the sky. Around us, traditional Nile boats, the graceful two-sailed dahabiyas and the colorful, single-sailed feluccas, flitted about like butterflies. It was beautiful, like a well-orchestrated scene from a movie.

Life on board fell into a pleasant routine. Mornings were spent moored on the riverbanks and wandering through temple ruins, while hot afternoons were spent cruising and watching the passing scenery while luxuriating over gin and tonics. Starlit evenings were spent sharing tales with my fellow passengers of pharaohs, mummies, ancient curses, and murderers.

Our intimate ship was launched in 1993 and fully renovated in 2006, modelled on the opulent era of Christie’s 1930s. The vessel’s decor is delivered with understated charm and an understanding of place. 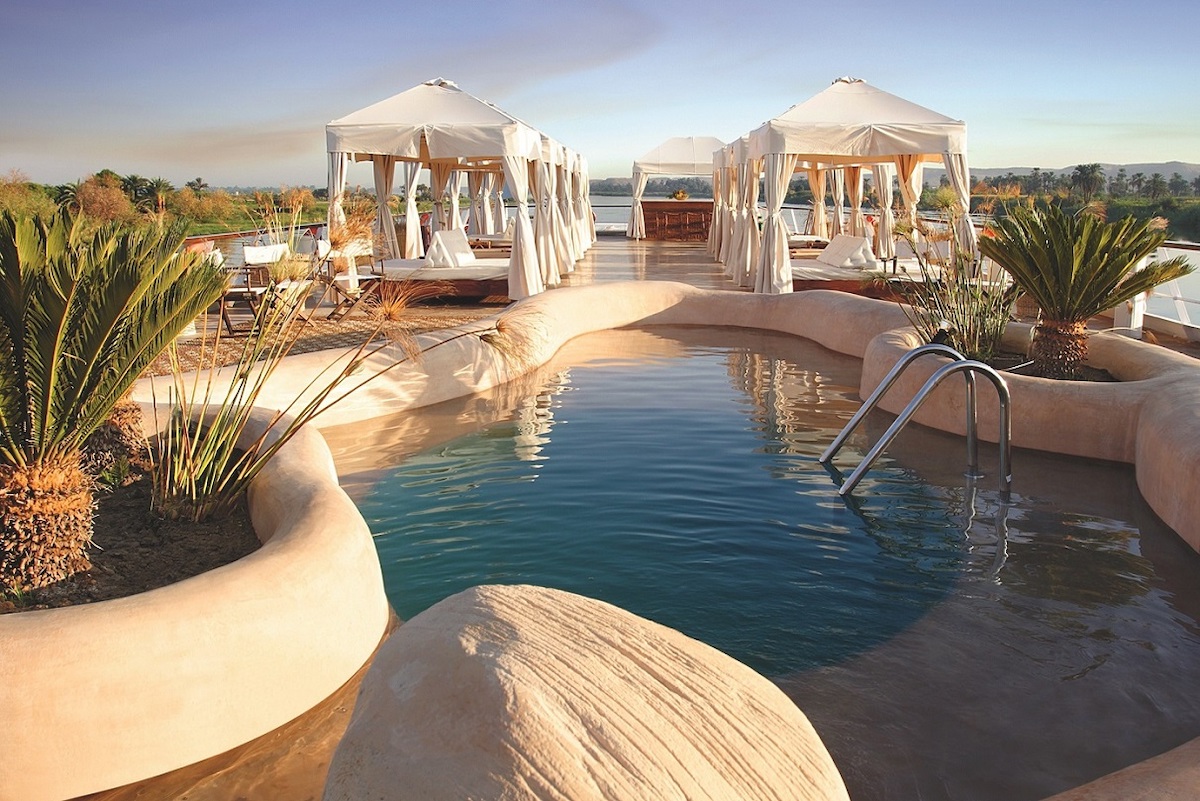 The sundeck on the 197-foot boutique cruiser is known as “Cleopatra’s Oasis,” with its sculpted swimming pool, tented sanctuaries, and Sahara lounge. (Photo courtesy of Scenic Luxury Cruises and Tours)

The sundeck on the 197-foot boutique cruiser is known as “Cleopatra’s Oasis,” with its sculpted swimming pool, tented sanctuaries, and Sahara lounge. Though my personal suite was comfortable and stylish, with its four-poster bed and tasteful furnishings, it is to this upper refuge that I was drawn. I loved idling here with a cold Sakara beer in hand and Christie’s mystery open on my lap. While contemplating “Death on the Nile,” I watched life on the river drift past.

While old men fished from diminutive skiffs with salvaged two-by-fours as oars, hawkers paddled alongside our ship to flog gallabiyahs, the traditional colorful cotton Egyptian tunics, and kaftans, the embroidered Egyptian dresses. Prices were agreed upon, and then Egyptian pounds were tossed down to the small boats in little bags and the beautiful garments heaved skillfully to the upper deck.

Shifting my gaze to the shore, I saw young shepherds astride trotting donkeys herd sheep, cattle and goats; weary camels shelter in the soft shade of palms; and women scrub clothes while their children splashed in the shallows. As dusk settled behind a brilliant sunset, haunting calls to prayers lingered over the water. Life on the Nile seemed never in a hurry. Rather, a beauty and delicious calmness pervaded a scene that seemed unchanged over thousands of years.

Village markets and temple tours along the river

Since Egyptian civilization has always followed the path of the Nile, river cruising offers the finest way to visit the country’s villages and temples. We docked at a bend in the river to take a short excursion through the noisy, chaotic market at Kom Ombo. The mayhem of the marketplace evoked the proper sense of mystery; I could imagine all manner of untoward happenings taking place here.

We toured the Temple of Kom Ombo, which commemorates two gods, the falcon-headed Horus the sky god and Sobek the crocodile god. Most temples have intact hieroglyphics adorning their walls, deciphering their story provides insight into Egypt’s fascination with death and the afterlife. 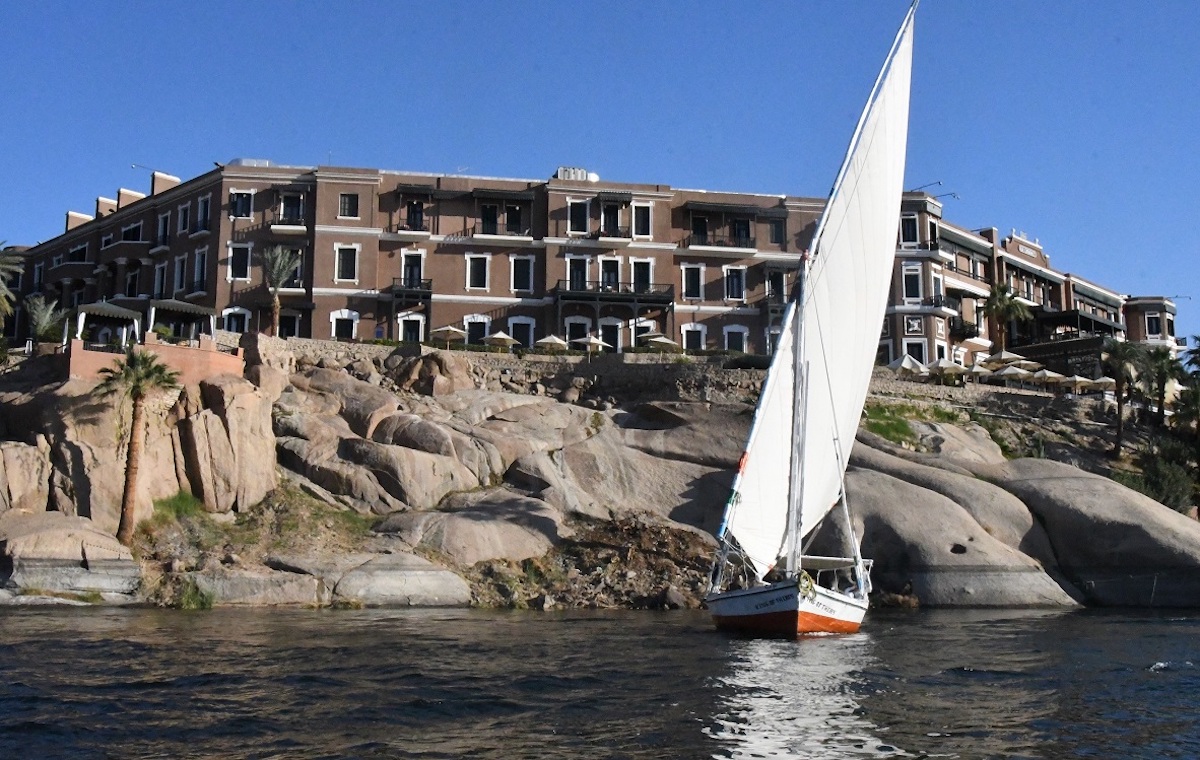 Our four-day Nile cruise ended in Aswan. Here, at the edge of the Nubian Desert, on the bank of the Nile, the majestic Sofitel Legend Old Cataract Aswan overlooks the river from atop a pink granite cliff. Built in 1899, the grand hotel conjures the golden age of travel, of wealthy guests and colonial administrators sipping gin and tonics on the terrace at sunset. Agatha Christie stayed here after completing a Nile cruise. And it was here in her top-floor suite that she penned the 1937 classic “Death on the Nile.” 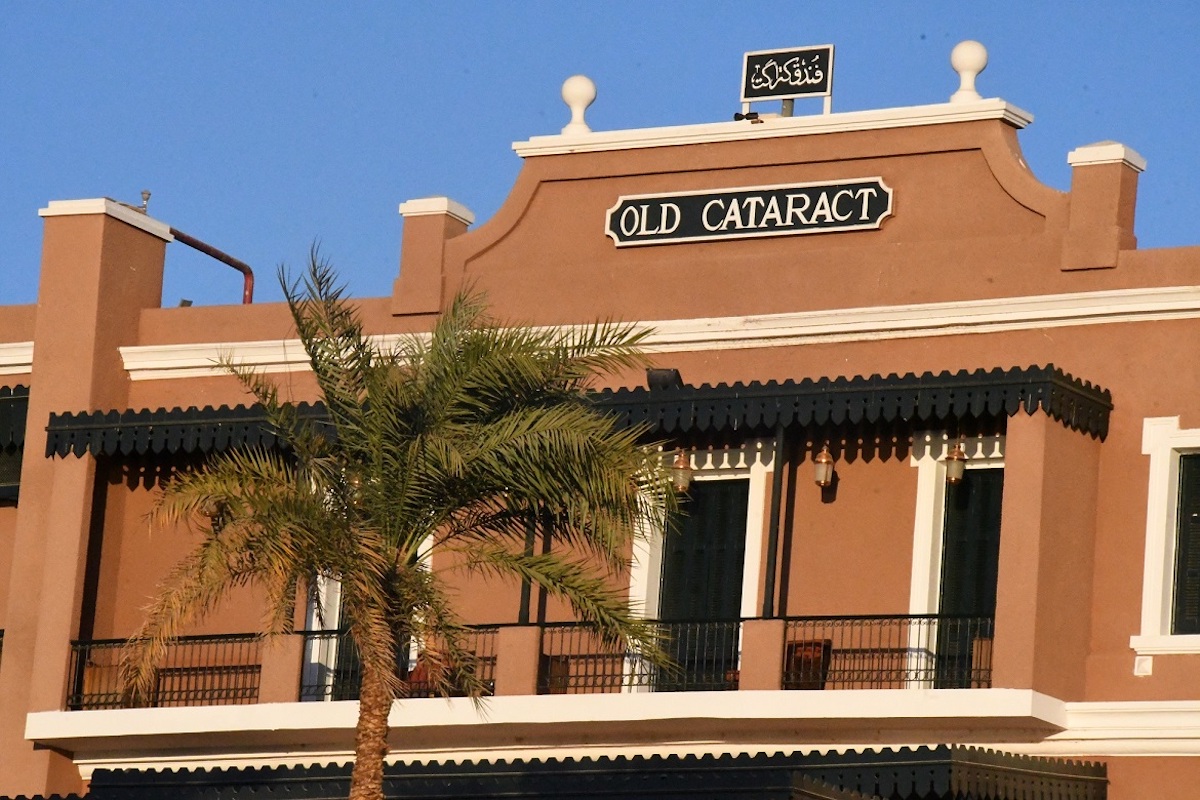 In her top-floor suite of the Old Cataract Hotel Agatha Christie wrote the 1937 classic mystery “Death on the Nile.”

Now, I found myself looking for clues of the author’s visit. I toured Christie’s suite, imagining the author sitting at the antique desk, enchanted, as was her fictional detective, by the beautiful view across to Elephantine Island where feluccas and motor launches crowded the narrow passages of the river. Looking over the same scene in Christie’s novel, her fictional sleuth Poirot observed, “It enchants me. The black rocks of Elephantine, and the sun, and the little boats on the river. Yes, it is good to be alive.”

While our cruise ended in Aswan at the iconic Old Cataract, the final stop on our tour was reached by a flight 190 miles south to Abu Simbel, where the temples of Ramesses II and his queen Nefertari were carved into a mountain. When the Aswan High dam was constructed in the 1960s and Lake Nasser created, UNESCO rushed to save the temples, painstakingly disassembling and moving them to higher ground. 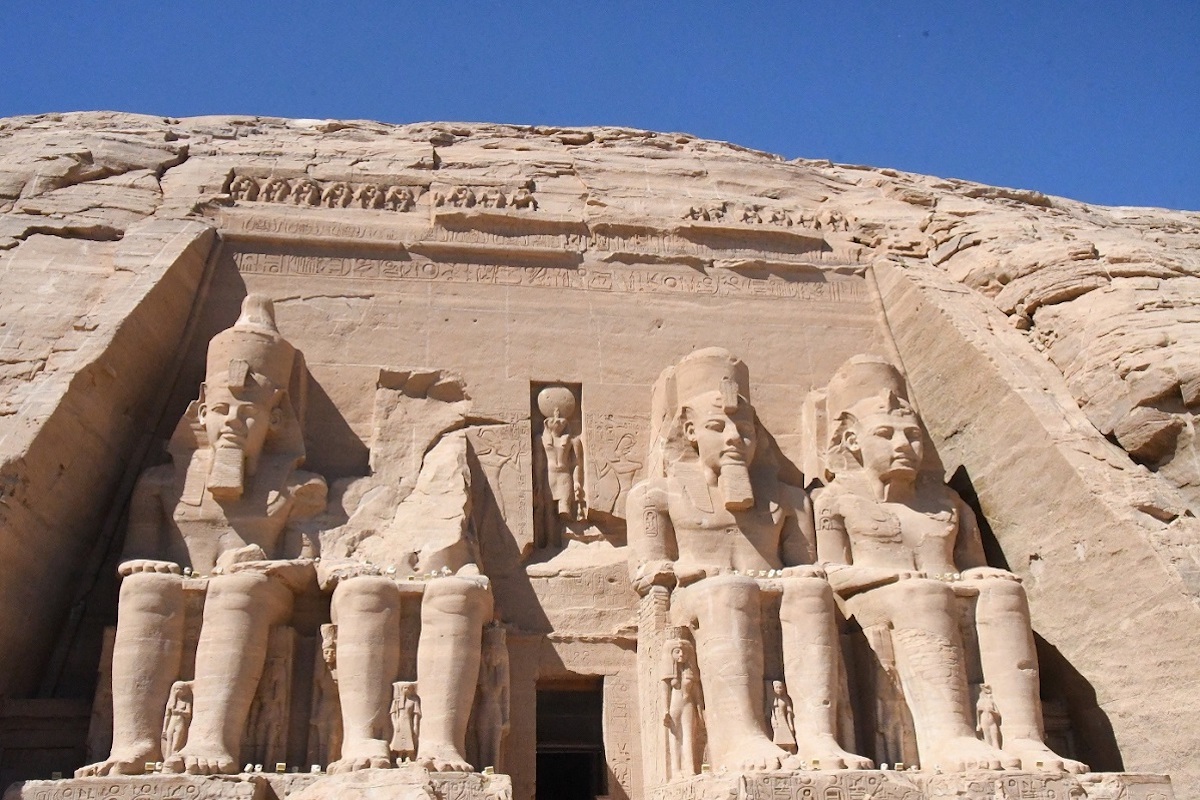 At Abu Simbel the temples of Ramesses II and his queen Nefertari were carved into a mountain.

On Poirot’s cruise in 1937, before the dam forever changed the landscape, the temples were a stop on the banks of the Nile. In Christie’s story a stone was willfully displaced here, tumbling down in an attempt at murder. I stayed alert, with my eyes focussed on the four large statues of Ramesses II above, but no rock came crashing down.

Watching a movie while dreaming of travel

After the success of the recent film “Murder on the Orient Express,” Kenneth Branagh will reprise his role as Hercule Poirot for Disney’s February 2022 release of “Death on the Nile.”

Egypt’s mystery and romance are what made the Nile an ideal setting for Agatha Christie’s famous story, and for my own delightful tour – where all that was missing was a good, old-fashioned murder.

All photo credits: James Ross except as noted.

Disclosure: The author’s trip was partially subsidized by Scenic Luxury Cruises and Tours. Any opinions expressed in this post are his own.

Other posts about river cruising on GettingOnTravel:

Getting Active on an Emerald Waterways Rhone River Cruise

Is a Yangtze River Cruise Worthwhile?

Luxury Safari Cruise on the Chobe River in Botswana 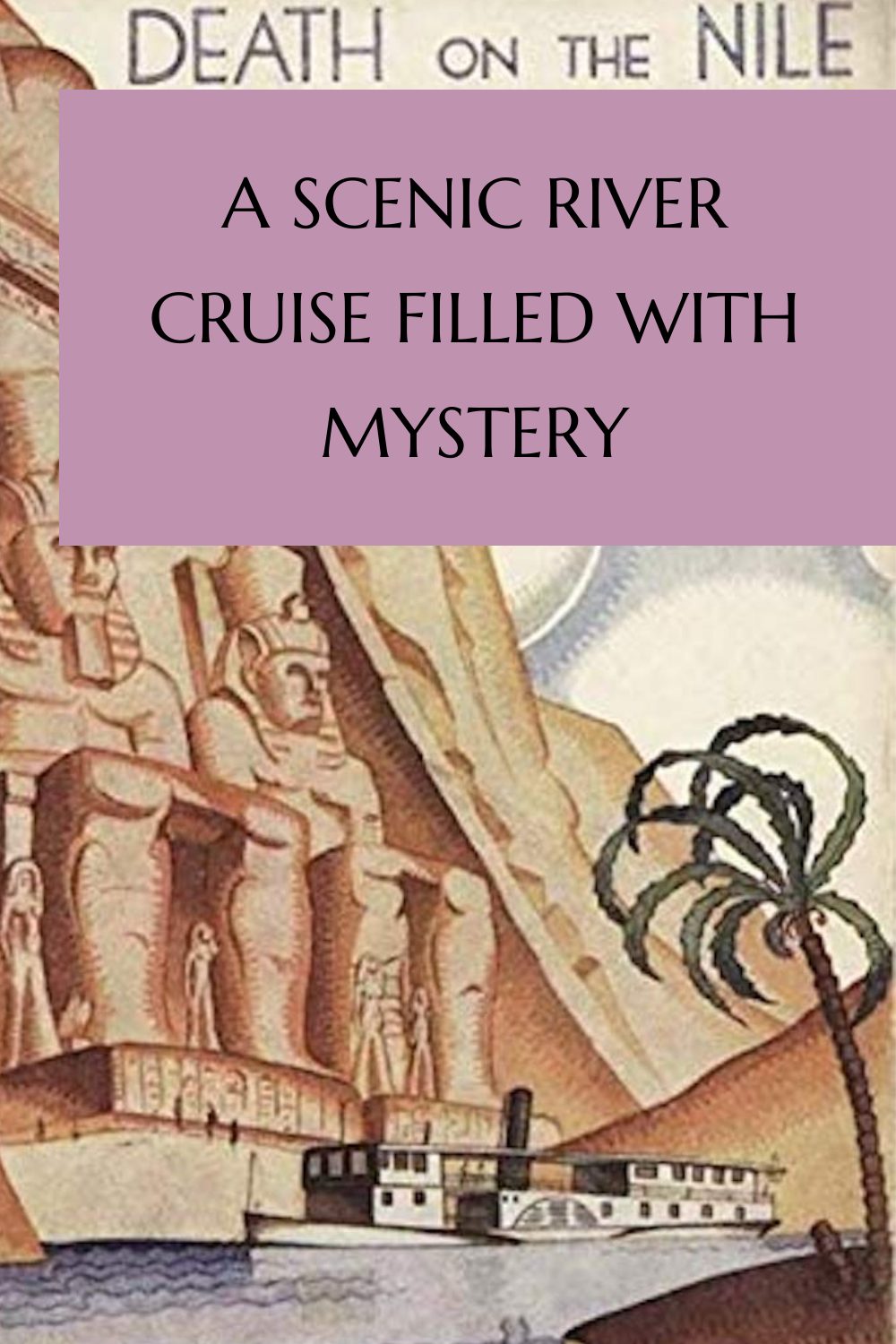