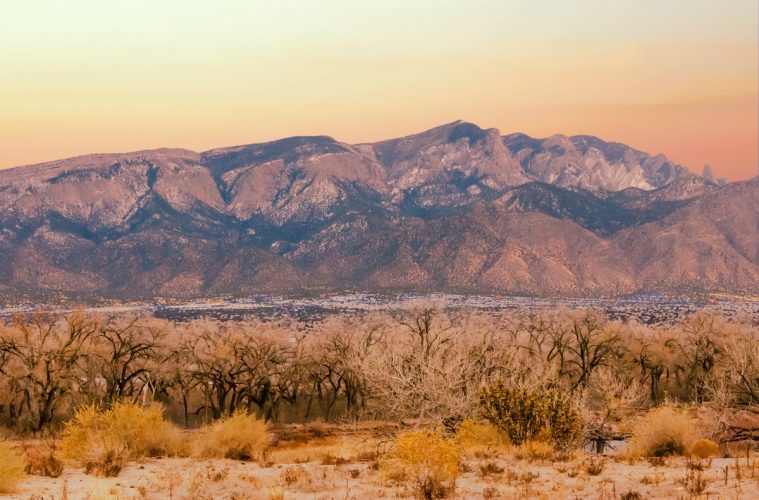 7 Cool Things To Do In Albuquerque From An Insider

There are plenty of things to do and see in Albuquerque, New Mexico. Clearly, Karin Leperi has fallen in love with her adopted home city.

Located in America’s Southwest region between the states of Arizona and Texas, Albuquerque occupies a high desert plain in Central New Mexico with the Rio Grande threading through the terrain. Because of variations in altitude from 4,900 feet to 6,700 feet in the nearby Sandia Heights foothills, the region’s habitat includes bosque, scrub and mesa vegetation such as sagebrush as well as mountains dotted with juniper and pine.

Thanks to the region’s heritage and environment, the city offers an abundance of activities. Here are 7 great things to do in Albuquerque: 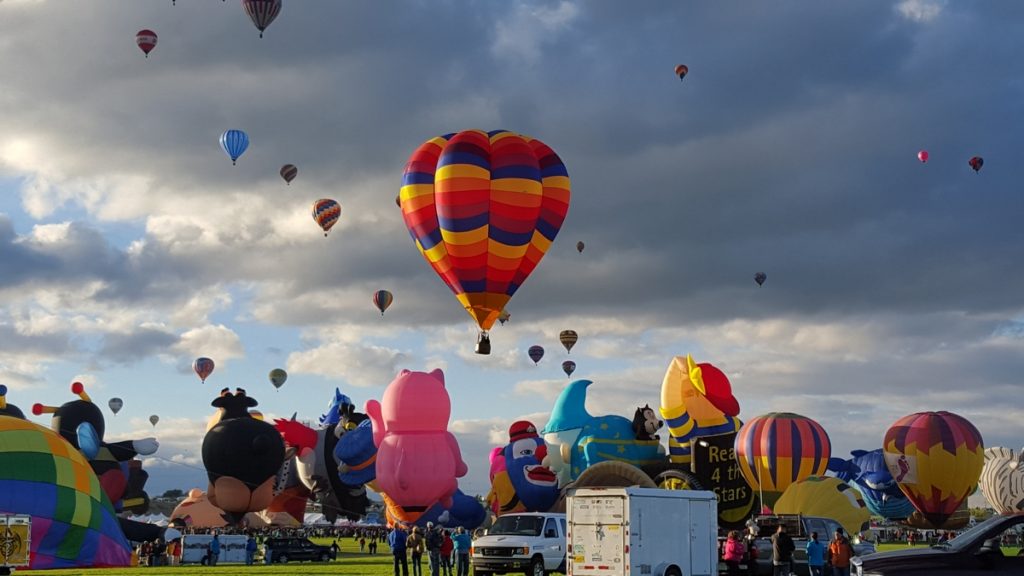 Come early October the mornings turn cooler in Albuquerque while the daytime skies are a brilliant cerulean blue. Conditions are ideal for hot-air ballooning.

According to state officials, “With nearly a million visitors each year, Albuquerque’s International Balloon Fiesta may be the world’s largest and best-known ballooning event.” Event organizers also say that it is one of the most photographed events in the world.

The Albuquerque International Balloon Fiesta takes place the first week in October at the Balloon Fiesta Park. During this time, just about everything regarding the science and art of hot air ballooning can be explored and even experienced, from watching the Early Dawn Patrol to closing ceremonies featuring the Farewell Mass Ascension.

It’s estimated that more than 100,000 people attend the events, with participants as well as spectators coming from around the world. However, be forewarned that because this is an extremely popular fiesta, it is best to arrive at the park by 4:30-5:00 am for weekend events. For evening events, try to be at the park by 4 pm. And be sure to take your camera and a jacket for cool Albuquerque mornings. As for breakfast, plan on buying a cup of java and a famous New Mexico breakfast burrito while at the park.

You’ll find the balloon park just a tad north of Albuquerque, north of Alameda Boulevard, one mile west of I-25 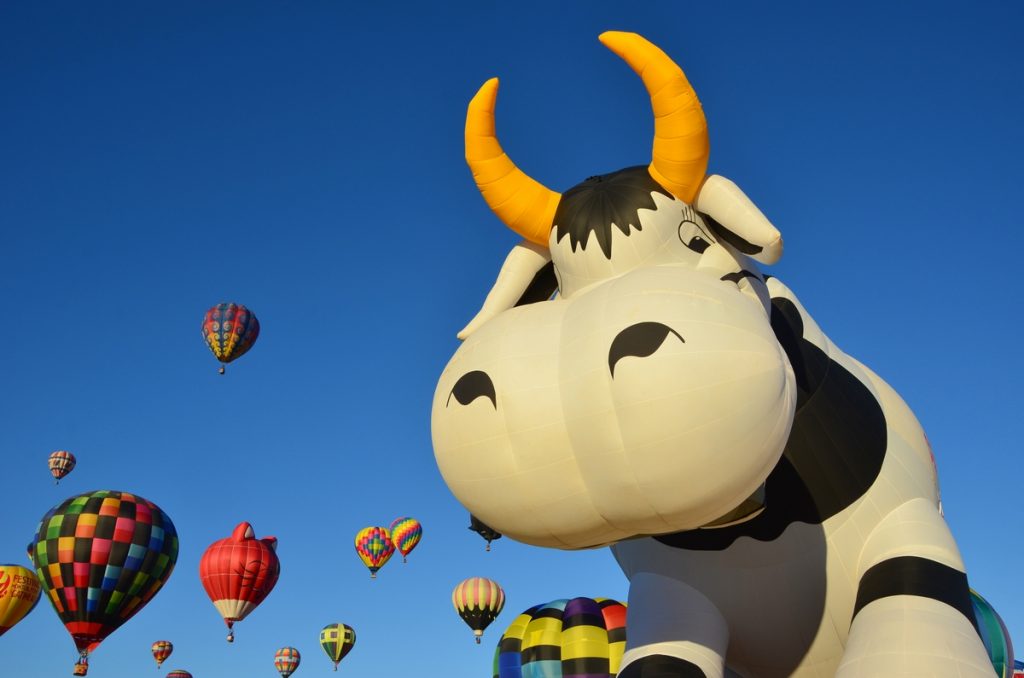 Hot-air balloon at the Albuquerque fiesta

At the annual Albuquerque International Balloon Fiesta, hot-air balloon events occur during the early morning and the late evening, when winds are more predictable. That leaves the rest of the day free to explore Albuquerque. So why not learn everything you ever wanted to know about hot air ballooning at the nearby balloon museum? After all, the Anderson-Abruzzo Albuquerque International Balloon Museum is considered to be the world’s premier museum on all things about ballooning.

The museum, opened in 2005 and situated at the southern edge of Balloon Fiesta Park, explains why Albuquerque is the “Balloon Capital of the World.” Named after two pioneering balloon pilots from the city of Albuquerque, the museum is a compilation of art, culture, science, history, and sport regarding the burgeoning popularity of ballooning. (After all, going up in a hot air balloon just happens to be on many people’s “bucket lists” these days.)

For a dose of architecture, history, and culture, visit Old Town Albuquerque 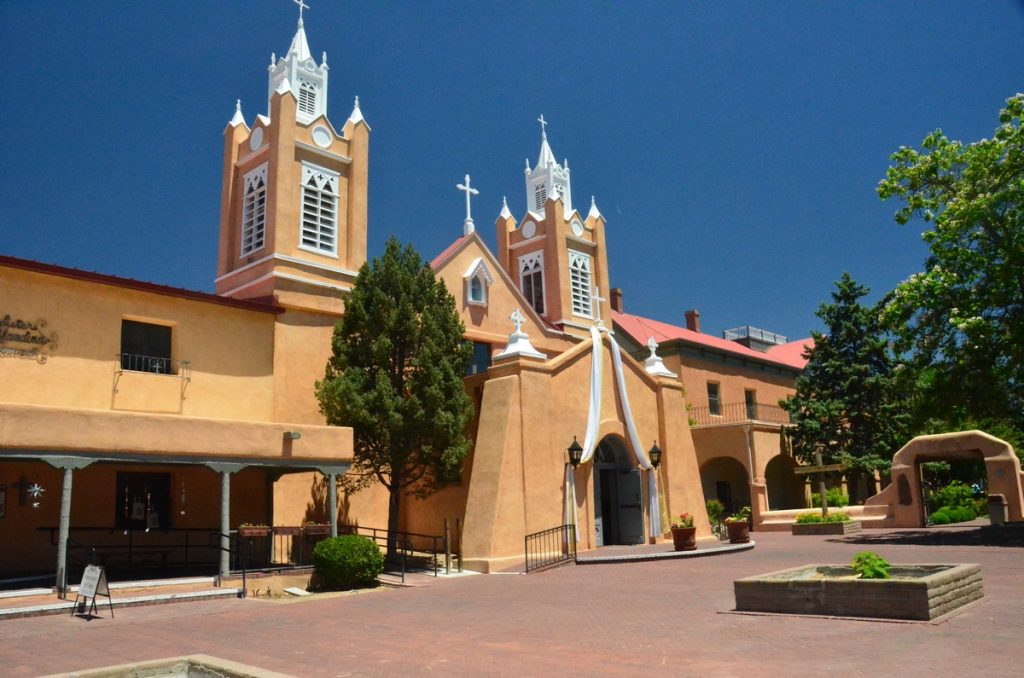 Historic Old Town, considered the cultural seat of Albuquerque, retains much of its original charm from its 1706  founding. The central plaza reflects how traditional Spanish towns were built when life and festivities revolved around the town square. San Felipe de Neri, an adobe church, anchors the square. Although the original church crumbled after heavy rains in 1792, the town people quickly rebuilt it in 1793 with adobe walls five feet thick. Albuquerque’s oldest church holds Catholic Mass regularly.

You can also browse Old Town’s more than 100 shops, catch a bite to eat at one of its many restaurants, and photograph the beautiful old church.

The KiMo Theatre opened on September 19, 1927, as a picture palace and vaudeville theater. This is the same year that the first talkie starring Al Jolson hit the movies. KiMo’s unique Pueblo Deco style, a showy architectural regional style, fuses southwest Native American cultures with the popular Art Deco of the 1920s and 1930s.

The interior mimics wood vigas by using plaster ceiling beams instead. Also, the air vents are disguised as Navajo rugs and war drums. My absolute favorite is the kitschy buffalo skulls with red glowing eyes. They almost seem to follow you wherever you walk. It’s actually quite creepy.

Reactions welcome at the National Museum of Nuclear Science & History 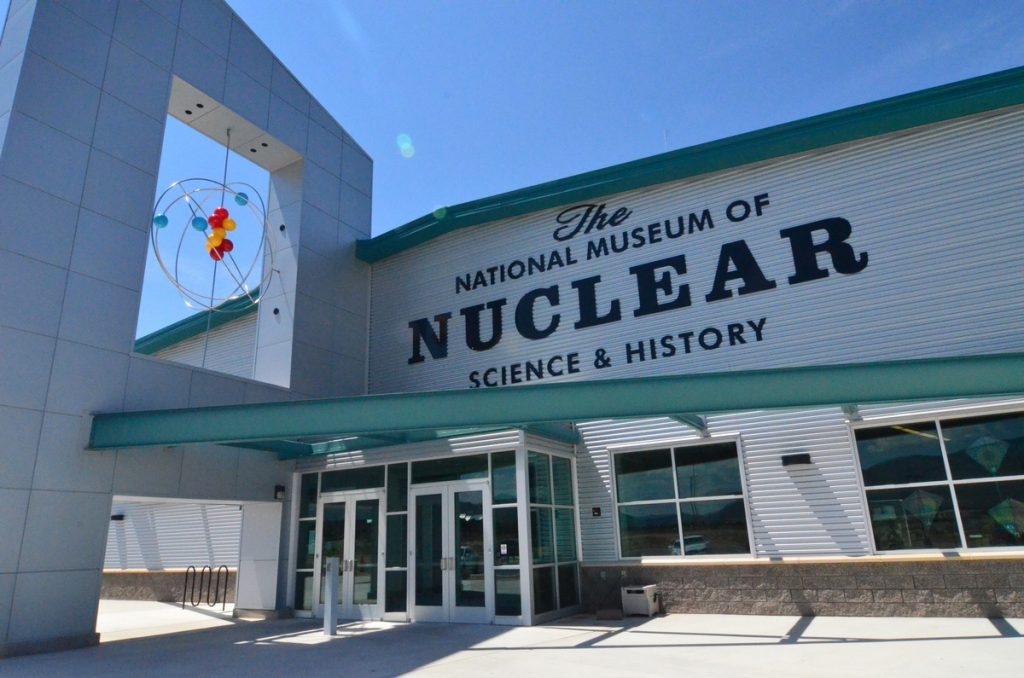 The National Museum of Nuclear Science and History is no ordinary museum. After a previous life as the Sandia Atomic Museum (1969), it re-opened to the public on April 4, 2009, with a new name and a new building. A Smithsonian affiliate, the museum traces the story of the Atomic Age, from the very beginning of our knowledge of the atom, through the Manhattan Project and the Cold War, and finally to the state of nuclear technology today, with a focus on peaceful uses.

However, one of this museum’s biggest bonuses and my favorite is outside in Heritage Park, home to the largest aircraft collection for public viewing in New Mexico: Here you can ogle five acres of static displays that include military aircraft, rockets, missiles, and canons.

Sandia Tramway for a peak experience

One of the coolest things to do in Albuquerque for a quick change of scenery is taking the Sandia Peak Aerial Tramway to the peak of the Sandia Mountains.

The 2.7-mile tramway rises from the desert floor to the mountaintop elevation of 10,378 feet. Because the Albuquerque air is some of the cleanest in the nation, the views extend hundreds of miles. In fact, the brochure touts an 11,000 square-mile panoramic view of New Mexico! And it’s not just about the views. Sandia Peak’s summit offers 25 miles of mountain slopes and trails open to hikers, bikers, and skiers.

Since the tramway is only about a 10-minute drive from Balloon Fiesta Park, plan a visit after an early morning at the Balloon Fiesta.

Don’t forget your camera and a jacket, as it gets cold on top of the mountain in every season. 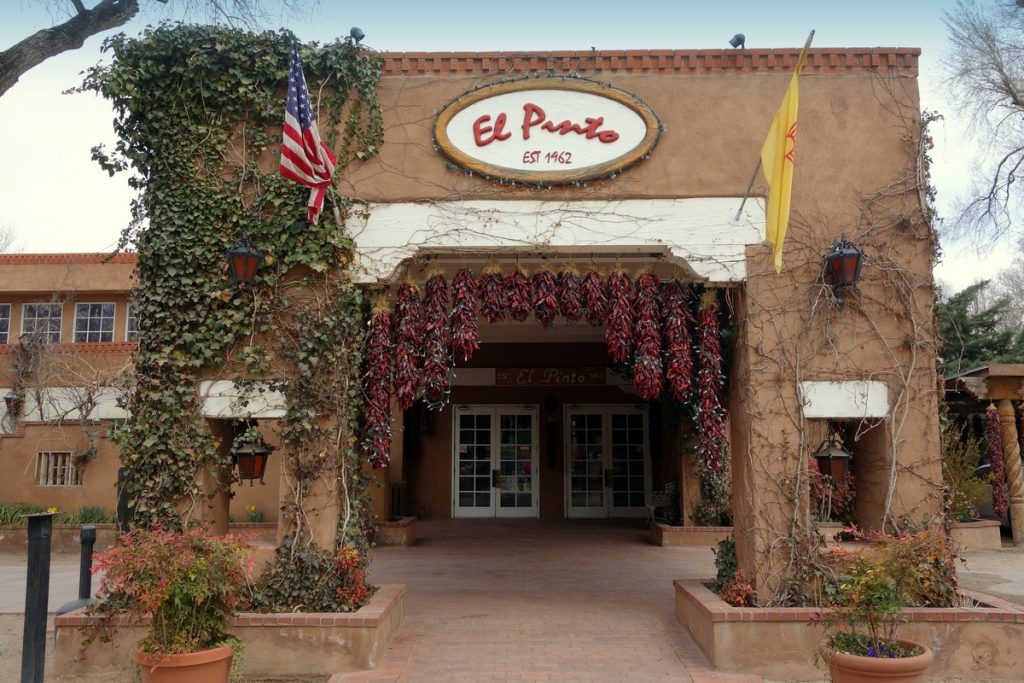 Be sure to try the ubiquitous green chile of New Mexico at local favorites such as El Pinto Restaurant, The Range Café, Frontier Restaurant, Church Street Café, or Owl Café. If asked whether you prefer red or green, reply  “Christmas,” the local favorite. Christmas includes both red (hot) and green (not so hot). 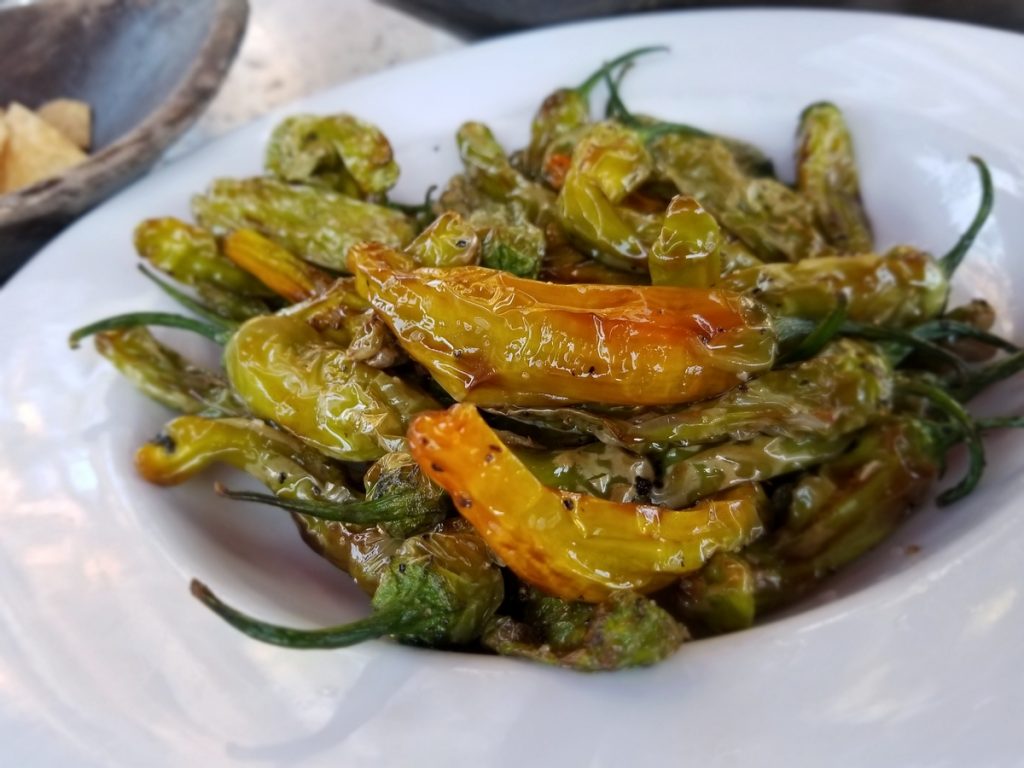 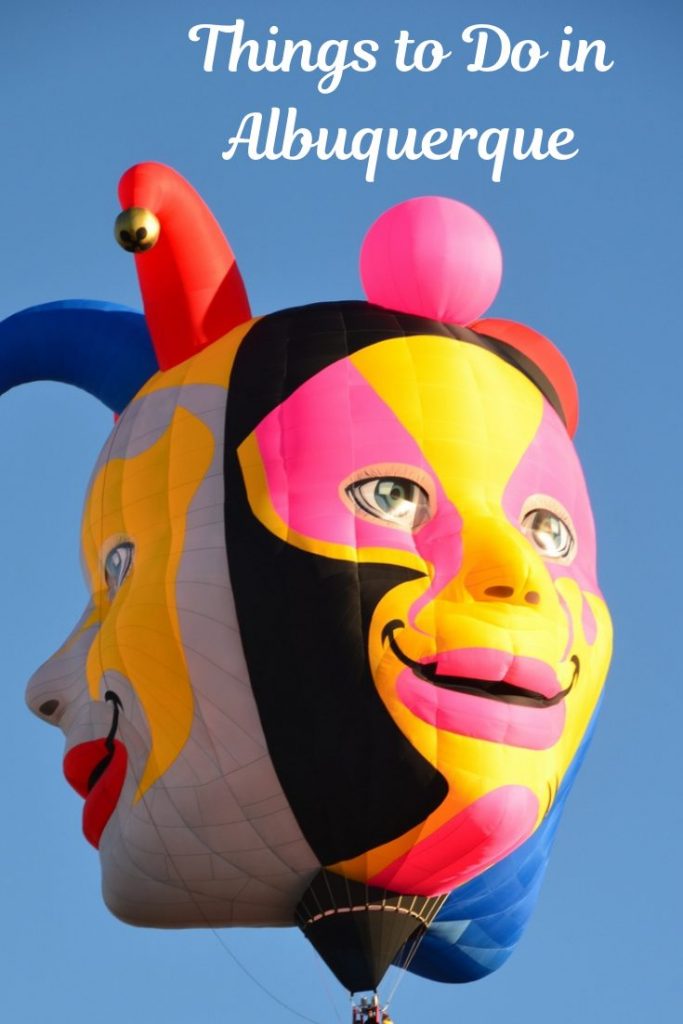